Towards the Development of an Integrative, Evidence-Based Suite of Indicators for the Prediction of Outcome Following Mild Traumatic Brain Injury: Results from a Pilot Study
Next Article in Special Issue

On the Nature of the Word-Reduction Phenomenon: The Contribution of Bilingualism

It is commonly accepted that bilinguals access lexical representations from their two languages during language comprehension, even when they operate in a single language context. Language detection mechanisms are, thus, hypothesized to operate after the stage of lexical access during visual word recognition. However, recent studies showed reduced cross-language activation when sub-lexical properties of words are specific to one of the bilingual’s two languages, hinting at the fact that language selection may start before the stage of lexical access. Here, we tested highly fluent Spanish–Basque and Spanish–English bilinguals in a masked language priming paradigm in which first language (L1) target words are primed by unconsciously perceived L1 or second language (L2) words. Critically, L2 primes were either orthotactically legal or illegal in L1. Results showed automatic language detection effects only for orthotactically marked L2 primes and within the timeframe of the N250, an index of sub-lexical-to-lexical integration. Marked L2 primes also affected the processing of L1 targets at the stage of conceptual processing, but only in bilinguals whose languages are transparent. We conclude that automatic and unconscious language detection mechanisms can operate at sub-lexical levels of processing. In the absence of sub-lexical language cues, unconsciously perceived primes in the irrelevant language might not automatically trigger post-lexical language identification, thereby resulting in the lack of observable language switching effects. View Full-Text
Keywords: bilingualism; event-related potentials; orthotactics; language detection; masked priming bilingualism; event-related potentials; orthotactics; language detection; masked priming
►▼ Show Figures 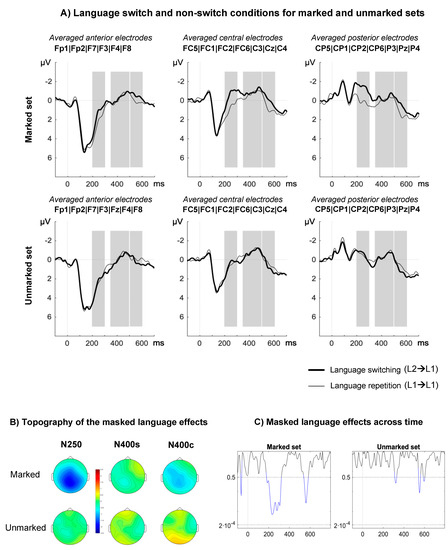