Recent Advances in the Treatment of Cerebellar Disorders

Various etiopathologies affect the cerebellum, resulting in the development of cerebellar ataxias (CAs), a heterogeneous group of disorders characterized clinically by movement incoordination, affective dysregulation, and cognitive dysmetria. Recent progress in clinical and basic research has opened the door of the ‘‘era of therapy” of CAs. The therapeutic rationale of cerebellar diseases takes into account the capacity of the cerebellum to compensate for pathology and restoration, which is collectively termed cerebellar reserve. In general, treatments of CAs are classified into two categories: cause-cure treatments, aimed at arresting disease progression, and neuromodulation therapies, aimed at potentiating cerebellar reserve. Both forms of therapies should be introduced as soon as possible, at a time where cerebellar reserve is still preserved. Clinical studies have established evidence-based cause-cure treatments for metabolic and immune-mediated CAs. Elaborate protocols of rehabilitation and non-invasive cerebellar stimulation facilitate cerebellar reserve, leading to recovery in the case of controllable pathologies (metabolic and immune-mediated CAs) and delay of disease progression in the case of uncontrollable pathologies (degenerative CAs). Furthermore, recent advances in molecular biology have encouraged the development of new forms of therapies: the molecular targeting therapy, which manipulates impaired RNA or proteins, and the neurotransplantation therapy, which delays cell degeneration and facilitates compensatory functions. The present review focuses on the therapeutic rationales of these recently developed therapeutic modalities, highlighting the underlying pathogenesis. View Full-Text
Keywords: cerebellar ataxias; therapies; motor rehabilitation; cognitive rehabilitation; non-invasive cerebellar stimulation; neurotransplantation cerebellar ataxias; therapies; motor rehabilitation; cognitive rehabilitation; non-invasive cerebellar stimulation; neurotransplantation
►▼ Show Figures 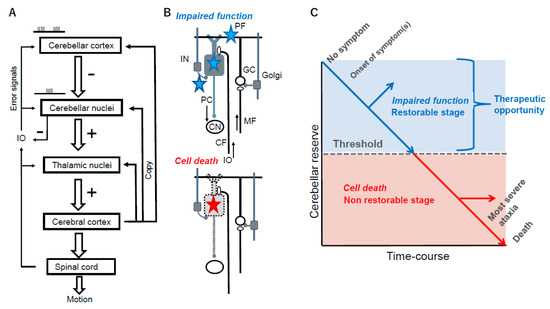