In this section, the case study which motivated the development of this work is described in detail.

The Jorge Manrique footbridge is located at Murcia (Spain). It was designed and built to connect the two banks of the Segura River which crosses the urban center of this town. The footbridge is one of the most innovative bowstring arch footbridges built in Spain at the end of the last century (Figure 1a). Its structural system consists of two main tied-arches linked to a steel spatial truss deck by two groups of 48 inclined hangers with a diameter of 24 mm. The deck is isostatically supported on rolled and pinned bearings. The span of the footbridge is around 54 m. The deck has a variable width, from 12.9 m at the abutments to 6.4 m at mid-span. The depth of the deck is equally variable, evolving from 0.6 m at the abutments to 1.2 m at the mid-span. The cross-section of the upper arch is a steel tubular profile with a diameter of 350 mm and 40 mm of thickness. Finally, the steel truss deck is configured spatially by an upper grating composed by ½ IPE-100 and HEA-100 European profiles and a spatial mesh of structural elements composed by tubular profiles whose diameter varies from 89 to 140 mm.
The deck floor is composed of two layers: (i) a top vinyl non-woven flooring (Figure 1b) with 18 mm of thickness and a weight of 8.2 kg/m2 [19] and (ii) a lower tempered glass layer with 30 mm of thickness. As mentioned previously, this upper layer was installed several years after the opening of the footbridge in order to avoid falls among pedestrians caused by its original sliding surface. During several years after its opening, local newspapers had published news about the complaints of the users due to both the falls and the high vibration level experienced when they crossed the footbridge [11,12]. Surprisingly the placement of the vinyl flooring not only improved the adherence of the floor but also the comfort level of the structure.
Thus, a study was performed to analyze the effect of this non-structural element on the modal parameters of the footbridge. The modal parameters of the structure were identified experimentally via signal processing, using an operational modal analysis (OMA) algorithm, of the measurements recorded during an ambient vibration test (AVT) [20]. In order to both establish the main parameters of this experimental test and check the experimental results, a finite element (FE) model of the footbridge was performed. The commercial FE analysis package Midas [21] was used for this purpose. The FE model was composed by 44,710 nodes and 58,192 elements. Two types of elements were considered: (i) 3D beam elements to model the arches and the deck and (ii) 3D cable elements to simulate the behavior of the hangers (Figure 2). For the FE model, it was assumed that the non-structural floor, both the glass layer and the vinyl layer, does not modify the stiffness of the structure and only affects the mass. As mechanical properties of the steel, the values proposed by the European standards were adopted [22]: (i) density, kg/m3, (ii) Young’s modulus, MPa, and (iii) Poisson’s ratio, . Finally, the footbridge is simply supported on four bearings. Each bearing is located at both sides of each arch.
Two numerical FE modal analyses [23] were performed: (i) footbridge without the vinyl flooring and (ii) footbridge with the vinyl flooring. As results of these analyses the first three numerical vibration modes and associated numerical natural frequencies were obtained. Table 1 shows both the first three numerical natural frequencies without the vinyl flooring, , and with the vinyl flooring, (being the number of the considered vibration mode). Additionally, Figure 3 illustrates the first three numerical vibration modes, , of the Jorge Manrique footbridge with the vinyl flooring. As Table 1 shows the effect of the vinyl flooring on the numerical natural frequencies of this footbridge is low. The relative variations of the natural frequencies for the three considered numerical vibration modes are lower than 1.60% so this fact should not be the main cause of the modification of the comfort level of this footbridge.

2.2. Experimental Identification of the Modal Parameters of the Jorge Manrique Footbridge

4. Assessment of the Dynamic Behavior of a Laboratory Footbridge without and with the Vinyl Flooring

In this manner, a laboratory steel footbridge was built and its experimental modal parameters were estimated based on the mentioned comparative method. In the next sub-sections, the identification process is described in detail.

The laboratory footbridge is a frame steel structure (Figure 4). The structure has only one span of about 4 m of length. The deck is composed by two longitudinal lateral beams and five transverse beams. The cross-section of the longitudinal beams is a European profile UPN 50 × 25 × 5 mm. The transverse beams are configured by two different profiles: (i) for the transverse beams at the supports, a single L 50 × 5 mm profile is considered and (ii) for the remaining transverse beams, a double L 50 × 5 mm profile is chosen. Four columns, UPN 50 × 25 × 5 mm, link the deck of the structure to the foundation. Additionally, a tramex panel (30 × 3 mm) is included between each two transversal beams. The columns are clamped to the foundation slab and simply pinned to the deck. The vinyl flooring was installed on the footbridge mimicking the same connection conditions of the Jorge Manrique footbridge. The vinyl flooring was connected to the laboratory footbridge via several steel clamps. The clamps were separated longitudinally around 0.5 m and transversally around 0.8 m.
A FE model of the structure was built (Figure 4) with the FE package Midas [21]. A numerical model with 133 nodes and 156 elements was developed in order to both assist in the design of the subsequent AVT test and check the experimental modal parameters. Two types of elements were used to build this numerical model: (i) 3D beam elements and (ii) 3D shell elements. In this manner, the behavior of all the beams and columns of the structure were simulated by the 3D beam elements. Meanwhile, the 3D shell elements were considered in order to simulate numerically the behavior of the tramex panels. A linear isotropic constitutive law was considered for 3D beam elements while a linear orthotropic constitutive law was taken into account for the 3D shell elements. As material properties for the steel, the values recommended by European standards were again chosen [22]. As an assumption, the effect of the vinyl flooring was simulated again via the modification of the mass matrix of the structure by an equivalent distributed mass of 8.2 kg/m2 [19].
Subsequently, the numerical natural frequencies of the laboratory footbridge for the two different scenarios were obtained through two different numerical modal analyses [23]. Thus, the first five numerical vibration modes of the footbridge without, and with, , the vinyl flooring (being the number of the considered vibration mode) are shown in Table 3. Additionally, Figure 5 and Figure 6 illustrate the first five numerical vibration modes of the laboratory footbridge without, , and with, , the vinyl flooring respectively.

4.2. Experimental Identification of the Modal Parameters of the Laboratory Footbridge

4.3. Discussion of the Results

In this paper, the effect of vinyl flooring on the modal properties of steel footbridges has been analyzed. The Jorge Manrique footbridge is a bowstring arch structure located at Murcia (Spain). After its opening, users complained about several comfort problems of this structure. On the one hand, the floor of the footbridge, configured by a tempered glass layer, was a sliding surface which caused numerous pedestrian falls. On the other hand, pedestrian-induced vibrations problems were denounced when the structure was occupied by a large number of pedestrians. In order to solve the first problem, a vinyl flooring was installed on the structure. The implementation of this non-structural element not only avoided successfully the pedestrian falls but also mitigated the pedestrian-induced vibrations problems. This side effect motivated the development of this study. Thus, as a first step, the modal parameters of the Jorge Manrique footbridge were identified experimentally. As result of this identification process, it was checked that although several natural frequencies of the footbridge were inside the frequency ranges which characterize several human rhythmic activities and a high pedestrian traffic usually crossed the structure, the high damping ratios obtained experimentally justify the absence of pedestrian-induced vibration problems. In order to quantify the influence of the vinyl flooring on these damping ratios, a comparative method was performed on a laboratory steel footbridge. As a result of this study, an average non-structural damping ratio of 2.069% was obtained for all the considered vibration modes. The results of this study show that this type of pavement can be considered as a valuable tool to be used as a passive damping system in order to control the response of steel footbridges under pedestrian action. Nevertheless, further studies are needed in order to better characterize the effect of vinyl flooring on other types of steel footbridges, to develop appropriate mathematical models which assist in predicting numerically the response of steel footbridges damped with this non-structural element and to analyze some possible limitations about the widespread use of vinyl flooring in outdoor scenarios.

This work was partially funded by the Ministerio de Economía y Competitividad of Spain and the European Regional Development Fund under research project DPI2014-53947-R. 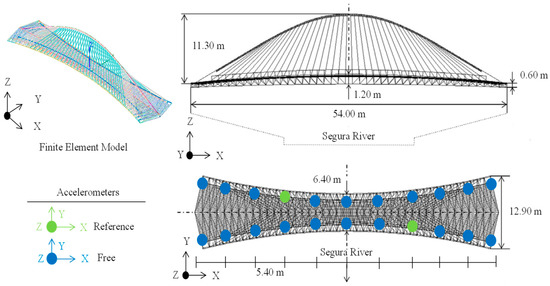 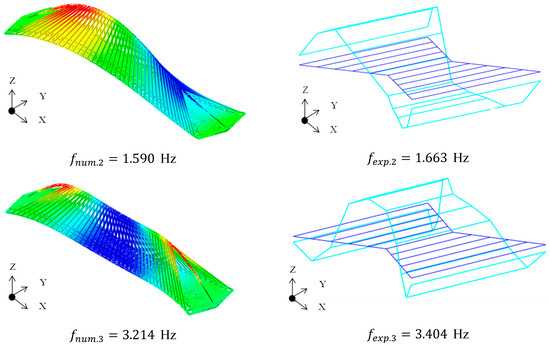 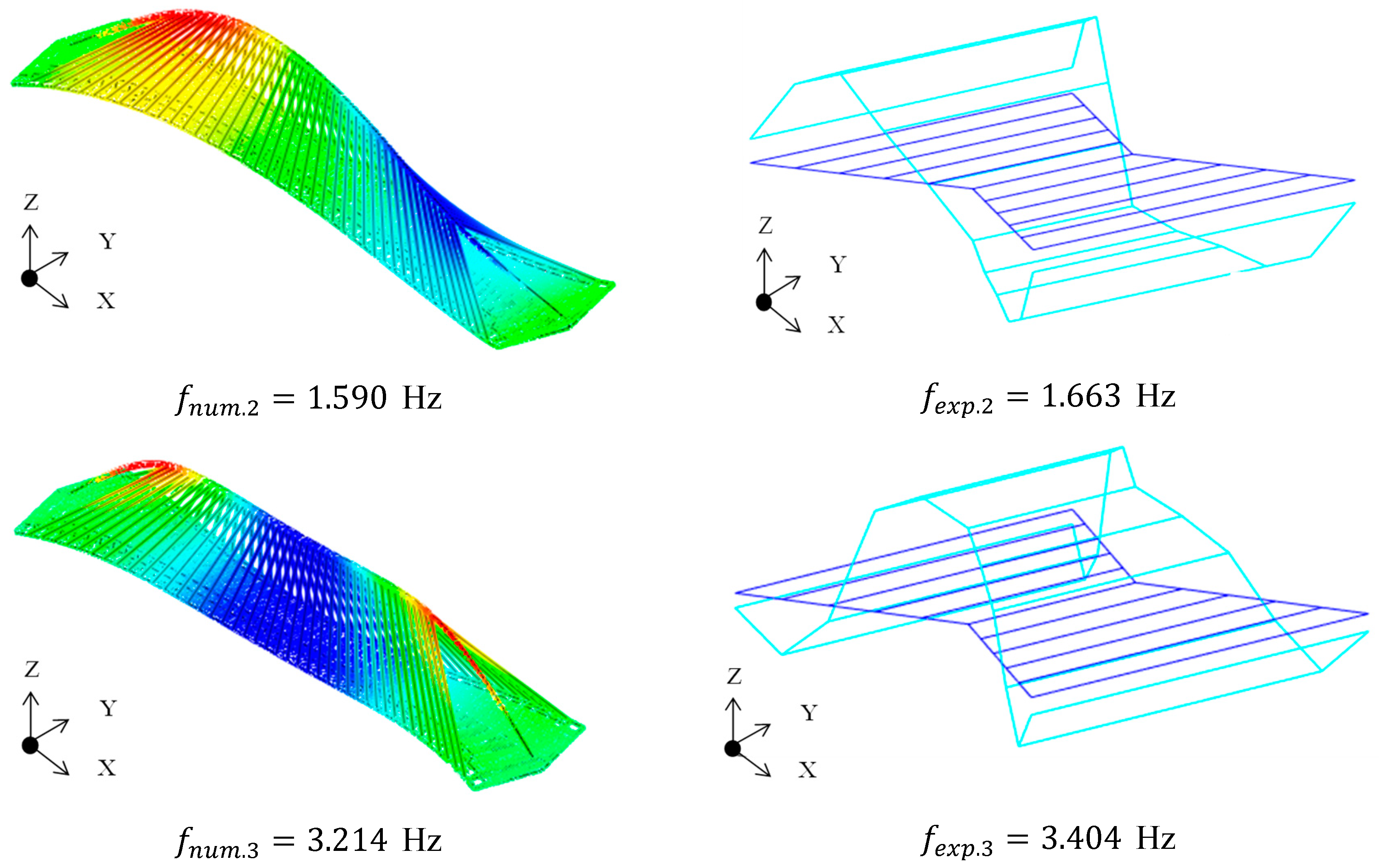 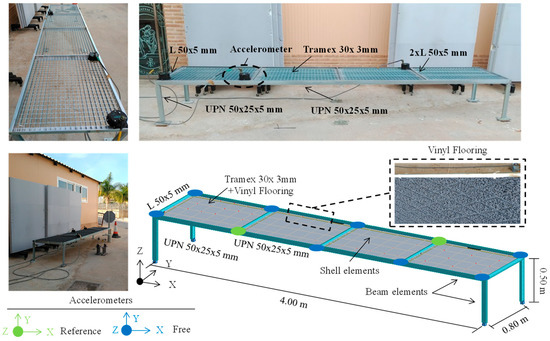 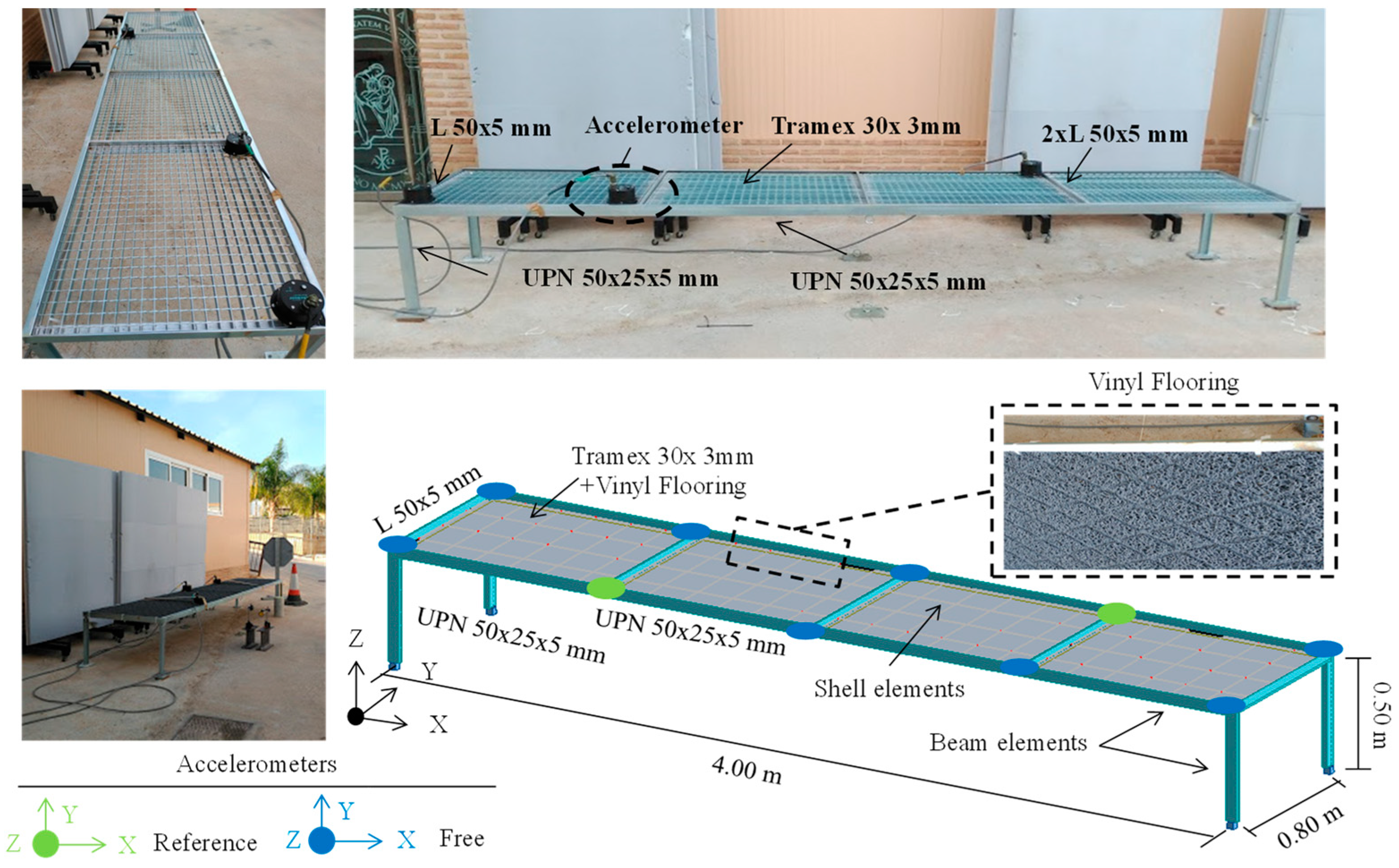 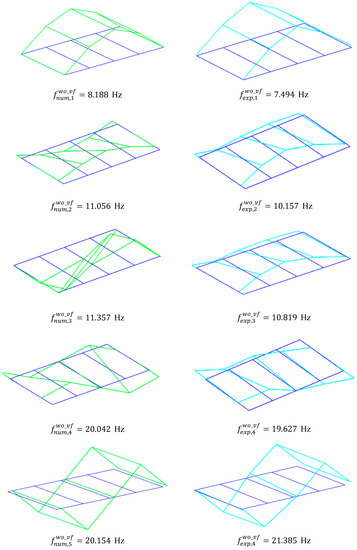 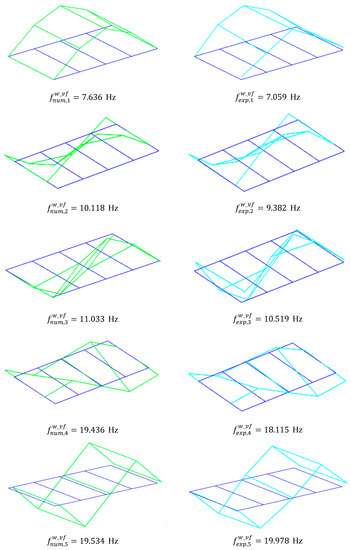 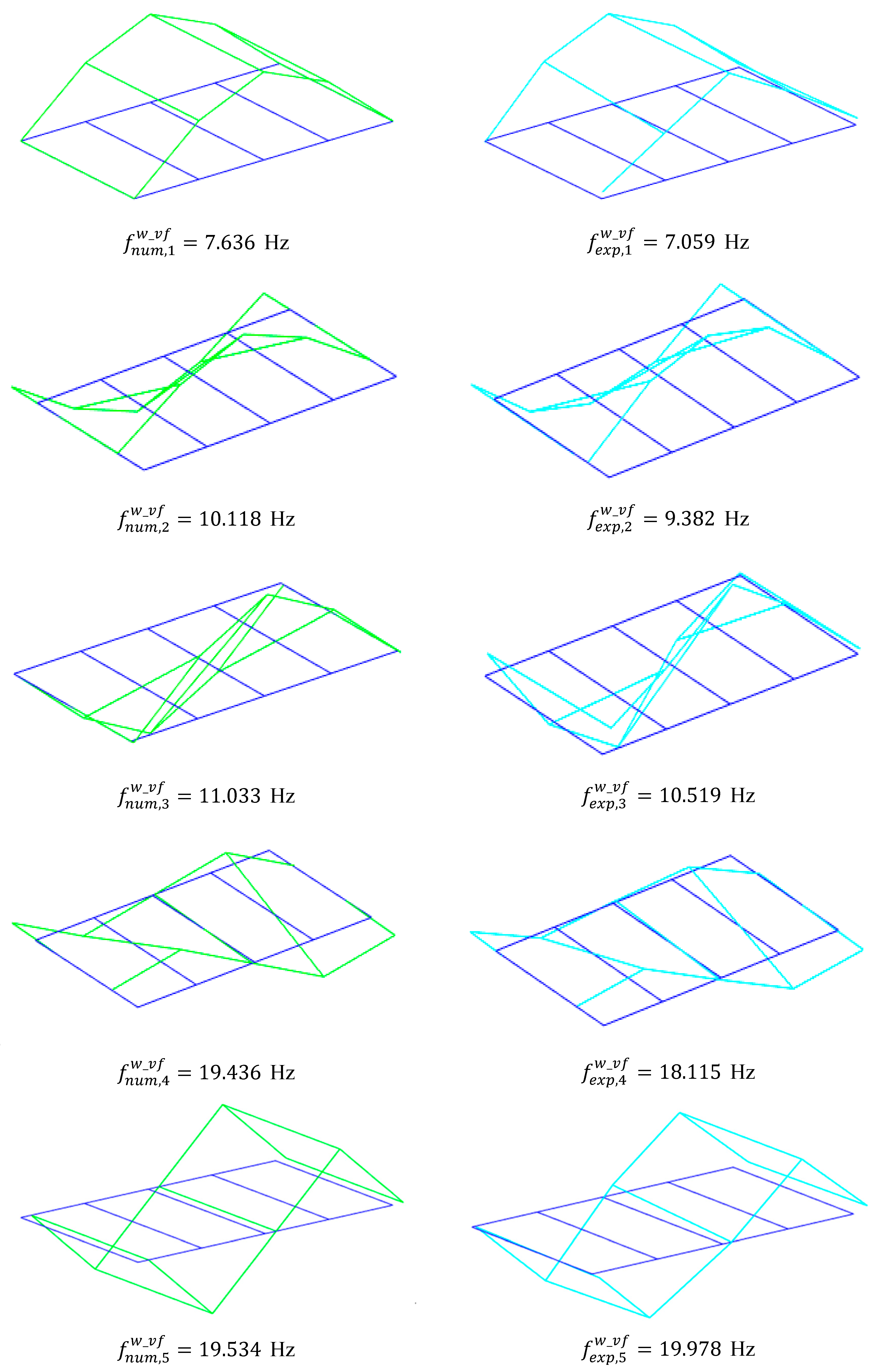 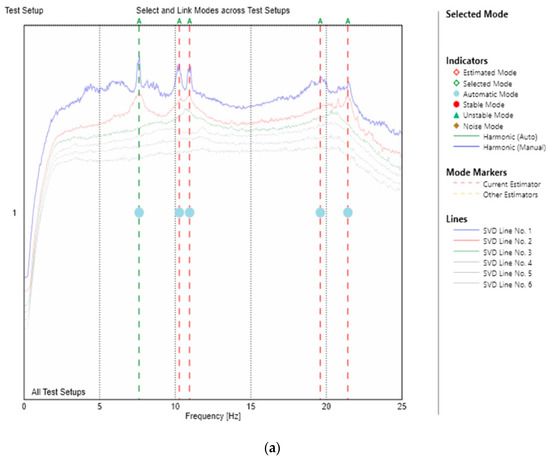 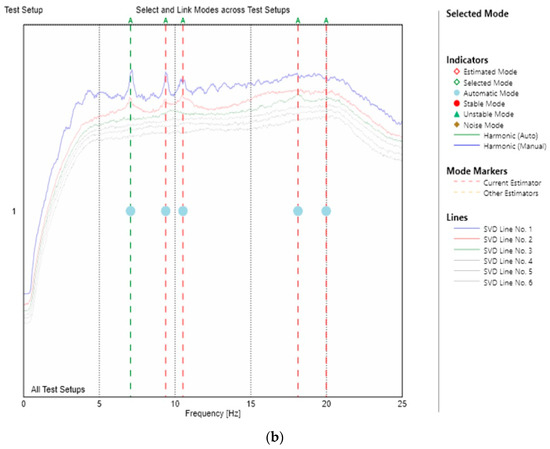 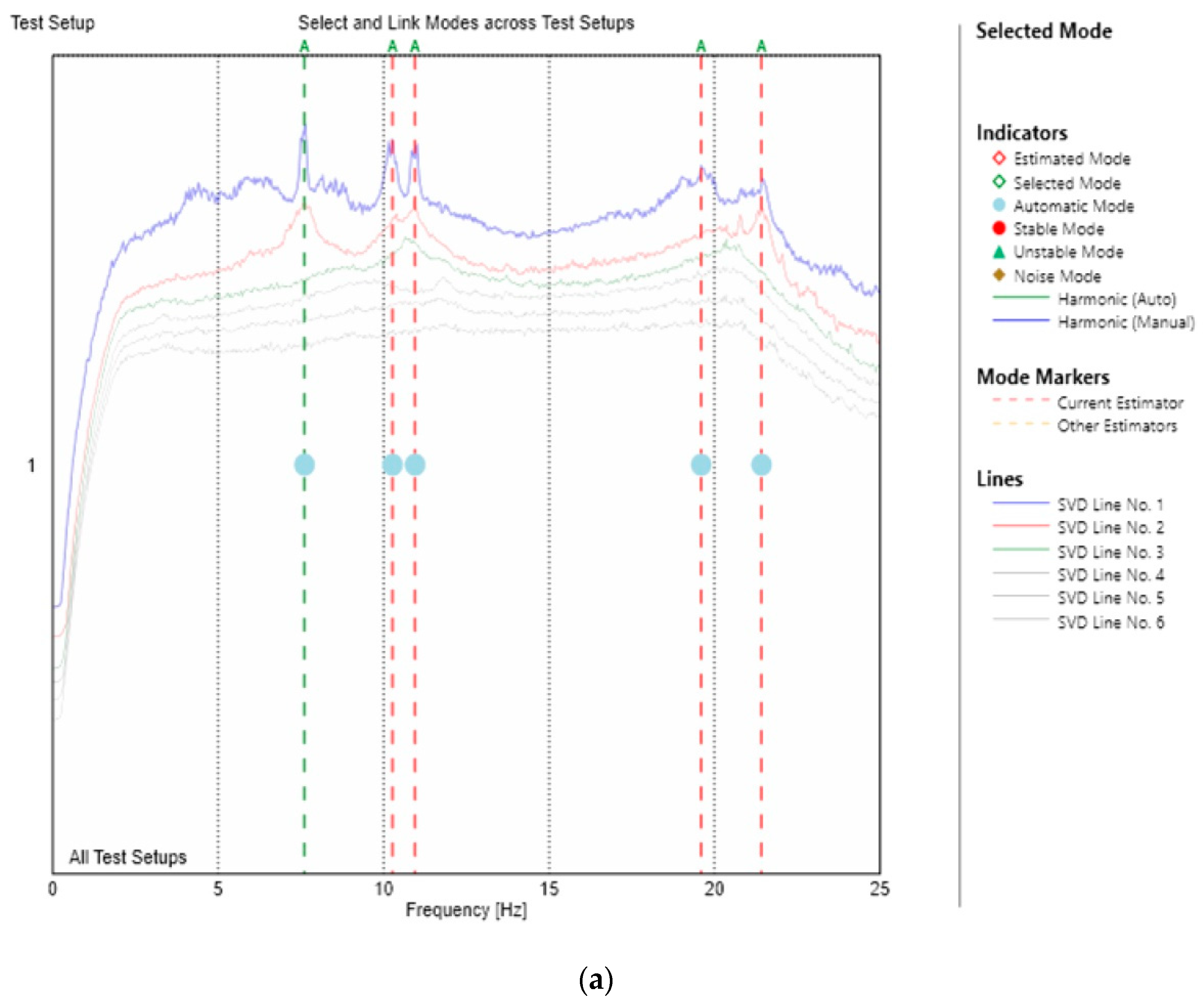 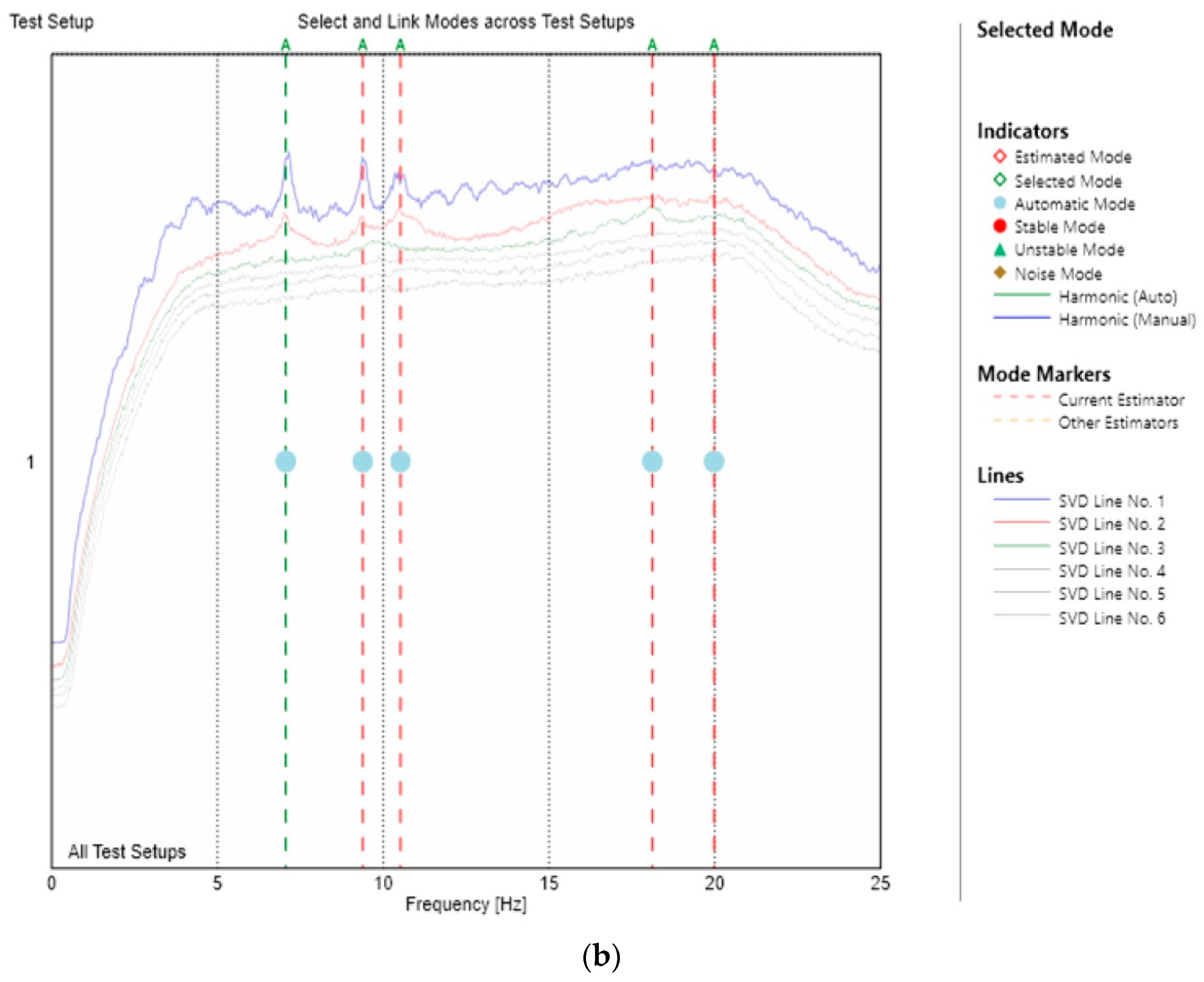