Chemical Defence of a Seagrass against Microfoulers and Its Seasonal Dynamics

The development of new antifouling methods gives increasing attention to biomimicry, which could provide nontoxic or less toxic solutions for the deterrence of unwanted settlers. Natural mechanisms against fouling are often highly dynamic and future applications may need to mimic not only defensive compounds, but also their dynamics in order to exploit the full potential of biomimicry. We here explore the seasonal dynamics of chemical defences against microfouling in eelgrass and the drivers of these dynamics.

In marine environments bacterial microfoulers are an important determinant for the settlement of algal and animal macrofoulers. At the same time fouling is usually subject to seasonal fluctuation. Additionally, the seagrass Zostera marina is prone to microfouling, although this marine spermatophyte is known to be chemically defended against bacterial settlers. Spermatophytes are often capable of induced or activated defences against biological enemies such as pathogens or herbivores, but it is still unknown whether they can fine-tune their antifouling-defence according to settlement pressure. We therefore assessed the seasonality of bacterial settlement pressure, defence against microsettlers and concentrations of a previously identified defence compound, rosmarinic acid, on surfaces of Z. marina. All examined variables peaked in summer, while they tended to be lower in spring and autumn. The seasonality of defence activity and rosmarinic acid surface concentration was positively correlated with the seasonal fluctuation of fouling pressure, which suggests that Z. marina can adjust its defence level to the relatively high bacterial fouling pressure in summer. Besides of biotic factors the seasonal change of environmental factors, such as nitrogen supply, and in particular temperature, also affected the defence level, either directly or through indirect effects on the microbial settlers.
Keywords:
rosmarinic acid; fouling; epibiosis; Zostera; chemical defence; seasonal fluctuation; epibiotic bacteria; microfouling

Seagrasses, marine flowering plants, are widely distributed across the globe [1]. They are often habitat formers and their roles in the coastal ecosystem are vital [2]. The eelgrass Zostera marina L is one of the most dominant seagrass species in Northern Atlantic coastal areas and also in the Southwest Baltic Sea, where its beds extend from 0.6 to 7.6 m below the mean sea surface level [3]. As marine macrophytes in general, eelgrass provides a substratum for epiphytic organisms and nutrients that can support growth of certain microorganisms. As a consequence settlement of various bacteria on its leaves is facilitated [4,5]. These microorganisms condition the interface for further settlement of micro- and macrocolonizers, such as animals and algae [6,7]. Beneficial effects of epibionts on their hosts have been observed [8,9], but in most cases the negative impact of fouling outweighs the positive impact. Fouled organisms often suffer from increased drag [10], reduced access to nutrients [1,11,12] and reduced photosynthesis [13]. Epibionts on marine macrophytes may also directly damage their hosts if they penetrate into their tissue [14] and in this way they can also increase the susceptibility to infection [15]. Correspondingly, resistance to fouling can be a determinant of the survival of introduced marine macrophytes in new habitats [16].
To cope with epibionts, marine macrophytes have evolved antifouling defences that are often adapted to specific foulers [8,9,17]. Various secondary metabolites with a potential for chemical antifouling defence have already been discovered in marine macrophytes. They can be non-toxic deterrents or compounds that inhibit growth, survival or reproduction of foulers [18,19]. In the tissue of seagrasses, biologically active phenolic metabolites were repeatedly discovered and proposed to be functional in the chemical defence against fouling and microbes [20,21,22]. This view was recently confirmed in a study that exclusively focused on compounds which are present on the surface of Z. marina [23]. Using a bioassay-guided approach, the authors identified rosmarinic acid as an ecologically relevant defence compound that can deter bacterial settlers at its natural concentration on the eelgrass surface.
Phenolic compounds in plants are also considered as carbon storage compounds that may accumulate when plants are photosynthetically active, but nutrient depleted [24]. This corresponds with observations of negative correlations between the concentration of phenolic compounds and the nitrogen content in eelgrass tissues [25]. Other environmental factors that could alter photosynthesis rates, such as light intensity, temperature, salinity, etc., may also affect the concentrations of phenolics in seagrass [26]. As a consequence, the concentration of phenolics in seagrass tissues often varies with season [27,28]. These observations could hint at seasonally variable surface concentrations of phenolic defence metabolites, but so far the dynamics of seagrass antifouling defences have not been investigated. Seasonality of antifouling defences has been observed in brown [29,30] and red [31] macroalgae, that are ecologically, but not evolutionarily related with seagrasses. For instance, the antifouling defence of Fucus vesiculosus exhibited a clear seasonal fluctuating pattern and a higher defence activity was observed in summer than in other seasons [29]. The mechanism behind this pattern was not clearly revealed, but the authors interpreted it as an adaptation to seasonal changes in abiotic factors, which often affect the content of algal tissues in metabolites that have antifouling activity [32,33,34].
In addition to abiotic factors, biological factors could also regulate the antifouling defence of marine plants. From a theoretical viewpoint demand-driven regulation of defences could be beneficial for the host in several respects. For example, it would reduce the metabolic costs of defences [35], and the risk of adaptation of enemies to these defences [36]. Indeed, plants are very often capable of induced or activated defences against herbivores and pathogens [37,38], but their capacity for demand-driven defence against micro- or macrofoulers is virtually unstudied. Furthermore, in algal macrophytes corresponding studies are scarce [39].
In the present study we investigated seasonal fluctuations in the chemical antifouling defence of Zostera marina L. The defence compound rosmarinic acid was also quantified, in order (a) to verify that previously observed seasonal dynamics of within tissue concentrations [28] can also be observed in surface concentrations, and (b) to test the hypothesis that the relative contribution of rosmarinic acid to the overall antifouling defence of Z. marina changes with season. Fluctuations in the abundance of epibacteria on Z. marina and on adhesive glass slides, representing settled bacteria and the bacterial fouling pressure, respectively, were also measured to test the hypotheses that antifouling defence and/or rosmarinic acid excretion of eelgrass correlate with fouling pressure.

3.1. Fouling Pressure, Settled Bacteria, on Eelgrass and the Ratio

Four bacterial isolates were applied in anti-bacterial settlement inhibition bioassays, in order to quantify antifouling activity on eelgrass. The defence strength against the different isolates varied, but it was always particularly low in May and June (Figure 2) and in the later month P. dokdonensis was even attracted and not deterred (Figure 2D). The defence strength increased in all four cases significantly from June to July and remained stable or decreased non-significantly until November (Repeated measures ANOVA, Table 2A–D). The mean defence activity against all four isolates basically exhibited the same pattern (Repeated measures ANOVA, Table 3A and Figure 3A) and it was significantly lower in May than in July and August and significantly lower in June than in any other month. The mean surface concentrations of rosmarinic acid were highest in September, but differences among months were not significant (Figure 3B, repeated measures ANOVA, Table 3B). Rosmarinic acid concentrations and defence strength were not significantly correlated (r = −0.2967, p = 0.1252).

Based on the Akaike Information Criterion (AIC) a multiple regression model including the four factors nitrite concentration, nitrate concentration, temperature and ammonium concentration—but not light, salinity and phosphate concentration—was the least complex model that could predict the monthly variation of mean antisettlement defences of Z. marina, although ammonium had no significant impact on the response (p < 0.05; Table 5A). In contrast, temperature was identified as the only of the same seven factors that was needed to predict the monthly variation of rosmarinic acid in these extracts (Table 5B) and the surface concentration increased with increasing temperature (Figure 5).
Two different regression models were developed to predict the bacterial density on Z. marina. One of them included all abiotic environmental factors except temperature, but within this model only light, nitrate concentration and salinity had a significant impact on the density (p < 0.05, Table 5C). The second model included fouling pressure (determined as density of bacteria on glass slides) and the mean antifouling activity of Z. marina surface extracts, but only the first of the two factors had a significant impact (p < 0.05; Table 5D). Altogether, the model based on six abiotic factors was statistically more significant than the model based on two fouling-related factors (p = 0.0018 vs. 0.0047).

The authors are thankful to the German Federal Agency for Ship Traffic and Hydrography (BSH, Hamburg) for temperature and salinity measurements, to the meteorology department of GEOMAR (Kiel, Germany) for light measurements and to Dr. Rheena Schumann (Biologische Station Zingst, University of Rostock, Germany) for measurements of nutrients. 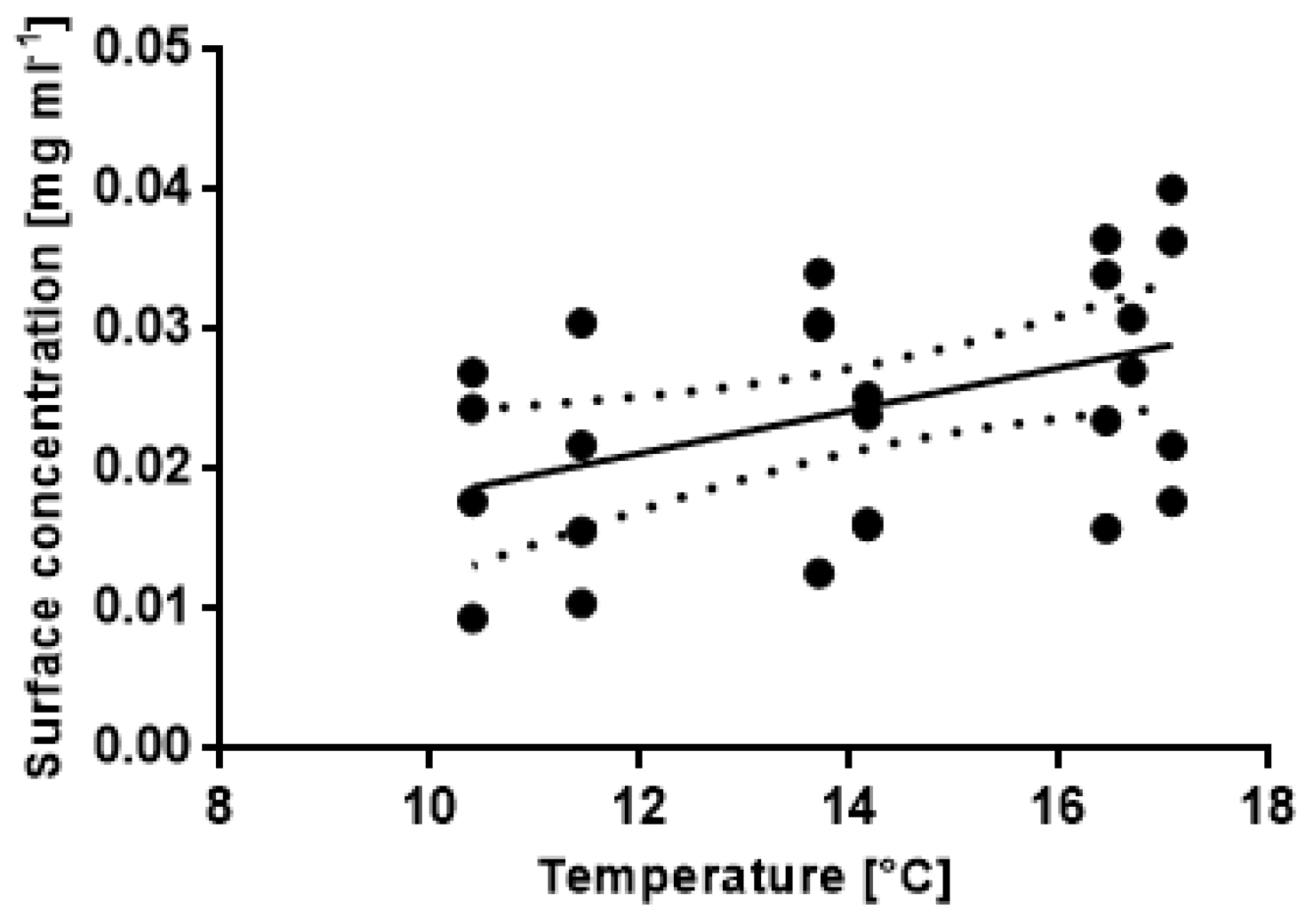