The ability to measure drivers’ physiological responses is important for understanding their state and behavior under different driving conditions. Such measurements can be used in the development of novel user interfaces, driver profiling, advanced driver assistance systems, etc. In this paper, we present a user study in which we performed an evaluation of two commercially available wearable devices for assessment of drivers’ physiological signals. Empatica’s E4 wristband measures blood volume pulse (BVP), inter-beat interval (IBI), galvanic skin response (GSR), temperature, and acceleration. Bittium’s Faros 360 is an electrocardiographic (ECG) device that can record up to 3-channel ECG signals. The aim of this study was to explore the use of such devices in a dynamic driving environment and their ability to differentiate between different levels of driving demand. Twenty-two participants (eight female, 14 male) aged between 18 and 45 years old participated in the study. The experiment compared three phases: Baseline (no driving), easy driving scenario, and demanding driving scenario. Mean and median heart rate variability (HRV), standard deviation of R–R intervals (SDNN), HRV variables for shorter time frames (standard deviation of the average R–R intervals over a shorter period—SDANN and mean value of the standard deviations calculated over a shorter period—SDNN index), HRV variables based on successive differences (root mean square of successive differences—RMSSD and percentage of successive differences, greater than 50 ms—pNN50), skin temperature, and GSR were observed in each phase. The results showed that motion artefacts due to driving affect the GSR recordings, which may limit the use of wrist-based wearable devices in a driving environment. In this case, due to the limitations of the photoplethysmography (PPG) sensor, E4 only showed differences between non-driving and driving phases but could not differentiate between different levels of driving demand. On the other hand, the results obtained from the ECG signals from Faros 360 showed statistically significant differences also between the two levels of driving demand. View Full-Text
Keywords: physiological signals; heart rate variability (HRV); user study; validation; driving environment physiological signals; heart rate variability (HRV); user study; validation; driving environment
►▼ Show Figures 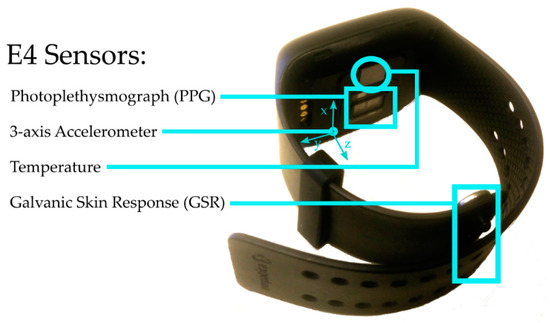