Water pollution has become a major concern, and water pollution control has been regarded as a priority for both society and public authorities [1]. The chemical compositions of natural water resources are primarily determined by industrial, domestic, and agricultural practices, geology, climate, and other natural and anthropic sources [2]. The anthropogenic pollutants, such as nitrogen compounds, metals, pesticides, pharmaceuticals, personal care products, etc., have a critical effect on the quality of water resources [3]. Among them, ammonium nitrogen is a common water contaminant and is generally released into the environment through industrial effluent and agricultural drainage [4]. Excess ammonium nitrogen in water leads to a series of ecological problems in aquatic environments related to eutrophication, including acidification of freshwater ecosystems, hypoxic water conditions, and toxicity to benthic organisms and fish [5]. Moreover, ammonium nitrogen can result in the generation of genotoxic nitrosodimethylamine [6]. Therefore, for public health and environmental safety, the removal of ammonium nitrogen from contaminated water is urgently required.
Different technologies have been developed to remove ammonium nitrogen from wastewater, including biological treatments [7], ion exchange [8], adsorption [9], electrodialysis [10], and reverse osmosis [11]. Among these technologies, adsorption has gained extensive attention owing to its obvious advantages, such as high efficiency and a simple process [12,13]. Another advantage of adsorption for ammonium nitrogen removal is that a wide range of adsorbents is available. Reported adsorbents for ammonium nitrogen removal include agricultural by-products [9], zeolite [6], resin [14], and hydrogel composites [15]. Currently, there is growing interest in developing effective adsorbents from low-cost renewable biomass resources, owing to their sustainability and economic efficiency.
Biochar is a carbon-rich solid prepared from biomass pyrolysis, especially low-cost biomass, under oxygen-limited condition. Owing to its favorable characteristics, including high porosity and cation exchange capacity, biochar shows good adsorption performance towards many pollutants from industrial, agricultural, and domestic waste waters [16]. Therefore, biochars prepared from different sources, such as plant biomass, corn cob, and giant reed, have been studied as effective and low-cost adsorbents for ammonium nitrogen [9,12,17]. More importantly, biochar after the adsorption of ammonium nitrogen can be further employed as slow-release fertilizer, which realizes the reutilization of the used adsorbent [17,18].
Sorghum distillers grain (SDG) is a solid waste from white spirits industry using sorghum as the raw material. Sorghum is a drought-tolerant plant that can easily adapt to arid climates. Due to its easy cultivation and high productivity, sorghum is widely used for liquor production. SDG contains starch, cellulose, protein, and lipid, and has been utilized as animal feed [19]. However, SDG is difficult to store since it rots rapidly because of its high moisture content and fermentable sugar content. Using distillers grain to prepare biochar by pyrolysis has been proposed as an alternative method since these fermentation residues have the potential to be converted into carbonaceous material. Although biochar prepared from brewers’ spent grain [17], also a fermentation residue, has been reported as an adsorbent for ammonium nitrogen capture, there is a lack of studies on the physicochemical properties and ammonium nitrogen adsorption performance of biochar produced from SDG. It is well known that the feedstock source has a critical impact on the properties of the prepared biochar, including the specific surface area and content of surface functional groups [12,20]. In addition, chemical activation is considered an efficient method to improve the biochar adsorption capacity [21,22], and reports regarding the use of activators in biochar preparation from SDG are scarce. Therefore, the current study focuses on the physicochemical characterization of chemically activated biochar produced from SDG and the evaluation of its adsorption capacity for ammonium nitrogen.
In this work, biochars derived from SDG through NaOH- and KOH-activated pyrolysis processes were studied for the adsorption of ammonium nitrogen from a simulated aqueous solution. Detailed characterizations, including scanning electron microscopy (SEM), Fourier transform infrared spectroscopy (FTIR), X-ray diffraction (XRD), thermogravimetry (TG), and specific surface area (SAA) analyses, were carried out to offer a broad evaluation of the prepared biochars. The effects of activators, pyrolysis temperature, and adsorption pH on the biochar adsorption capacity were analyzed. Moreover, the adsorption process was further analyzed based on the adsorption kinetics and isotherm, with the aim to discover the possible adsorption mechanism of ammonium nitrogen on the biochar.

Three grams of SDG were impregnated in 10 mL 30 g/L NaOH (or KOH) solution for 12 h and oven-dried at 105 °C overnight. Afterward, the SDG samples were ground and placed in a tube furnace (SK2-1-12, Tianye, China) for pyrolysis. The pyrolysis experiments were performed at different temperatures (550, 650, and 750 °C) with a heating rate of 5 °C /min in a sweeping nitrogen gas atmosphere for 2 h, according to the previous study [21]. After pyrolysis, the obtained biochar was washed with excess deionized water three times. The washed biochar was then oven-dried at 105 °C for approximately 5 h and weighed for a yield calculation. For comparison, dried SDG without chemical activation was also pyrolyzed at 650 °C for 2 h with a heating rate of 5 °C /min to obtain an activator-free biochar.

The ash content was determined by placing the dried SDG samples in a muffle furnace at 600 °C for 2 h. The crude lipid content in the SDG was analyzed by Soxhlet extraction with petroleum ether for 5 h [24]. The solvent was then removed by evaporation under vacuum at 40 °C. The crude protein was determined using the Kjeldahl procedures as described in Association of Official Agricultural Chemists (AOAC, Washington, DC, USA, 1995, 16th ed.) guidelines. The cellulose and starch contents in the SDG were measured by enzymatic methods using cellulase (Sigma-Aldrich) and amylase (Sigma-Aldrich), respectively. The glucose released after enzymatic saccharification was estimated spectrophotometrically by the 3,5-dinitrosalicylic acid (DNS) method [25]. The element contents (carbon, hydrogen, and nitrogen) in the SDG were obtained using an elemental analyzer (Vario EL III, Elementar, Germany).

XRD patterns were obtained from an Ultima IV X-ray diffractometer (Rigaku, Japan), which was operated at 35 kV and a scanning speed of 20°/min in the 2θ range from 10 to 70° using Cu Ka radiation (k = 1.5418 Å). FTIR spectra were obtained using a Nicolet Avatar (Thermo Electron, San Jose, CA, USA) and the potassium bromide technique, in a proportion of 1:100 (100 mg of KBr approximately). For zeta potential determination, the biochar sample (0.01 g) was firstly ground to pass through a 200 mesh sieve and well dispersed in 100 mL distilled water (at pH ranging from 3.0 to 10.0, adjusted using NaOH or HCl) by 10 min ultrasonic treatment. The zeta potential was analyzed in triplicate with the help of a Zetasizer Nano ZS instrument (Malvern Instruments Ltd., Worcestershire, UK). The thermal stability of the biochar samples was measured by employing a TG instrument (TA SDT 650, New Castle, DE, USA) with a heating rate of 10 °C/min from 25 to 800 °C under the protection of N2. The specific surface area of the biochar samples was analyzed using an Automated Physisorption and Chemisorption Analyzer (Tristar 3000, Norcross, GA, USA). The samples were degassed under vacuum at 300 °C for over 3 h before measurements. The morphology of the biochar was observed using a SEM instrument (JSM-5600LV, JEOL Ltd., Tokyo, Japan) operated at a voltage of 20 kV. Boehm titrations of the biochars were conducted according to the protocol described previously [26].

The compositions of raw materials have an important effect on the properties of the obtained biochar. Composition analyses of the SDG sample showed that it contained 24.6% ± 0.7% starch, 19.6% ± 0.4% cellulose, 14.9% ± 0.5% protein, 4.4% ± 0.2% crude lipid, and 6.4% ± 0.3% ash. Although the SDG was the residue of sorghum after fermentation, it still had a high content of starch, which was mainly caused by the relatively low hydrolysis efficiency by microbes during fermentation [19,27]. The high contents of cellulose and ash mainly come from the rice husk, which is added to loosen the solid sorghum medium and improve the heat transfer for fermentation and distillation [19]. The elemental analysis suggested that the SDG mainly contained C (44.1%), H (6.5%), and N (2.9%) because of its high starch, cellulose, and protein contents. Accordingly, the presence of high carbon element content makes the SDG a potential feedstock for biochar production.

3.2. Adsorption of Ammonium Nitrogen on Biochar

3.2.1. Effect of activation agents on the adsorption capacity of biochar

3.2.2. Effect of Activation Temperature on the Adsorption Capacity of Biochar

In order to understand how NH4+-N is adsorbed onto the biochar adsorbent, as well as to define the equilibrium data, the adsorbed amounts and residual NH4+-N concentration in the solution after adsorption were fitted using both Langmuir and Freundlich isotherms. The Langmuir model (Equation (5)) indicates monolayer adsorption on a homogenous surface, while the Freundlich isotherm (Equation (6)) elucidates nonideal adsorption on heterogeneous surfaces and multilayer adsorption [36,37]: where Qe is the amount of NH4+-N absorbed (mg/g) and Ce is the equilibrium concentration (mg/L) of NH4+-N in aqueous solution after adsorption. kL (L/mg) and Qm (mg/g) are the Langmuir constant and the monolayer maximum adsorption capacity of NH4+-N onto biochar, respectively. The Freundlich constants kF and n are the multilayer adsorption capacity (mg/g) and the adsorption intensity, respectively.
The plots of the adsorbed NH4+-N amounts on biochar versus the residual NH4+-N concentration in the solution at different temperatures are given in Figure 3b, as well as the fitting curves using the two isotherm models. The fitting parameters of the biochar adsorption equilibrium data using the two models are shown in Table 2. As shown in Figure 3b, the adsorption process was represented by the Freundlich model very well, and the correlation coefficient (R2) values were all higher than 0.99 (Table 2). The values of 1/n in the Freundlich model were lower than 0.1, suggesting that the adsorption process is favorable [35,38]. The value of 1/n can be further divided into five levels, and when the value is between 0.1 and 0.01, the adsorption is categorized as a strongly favorable level, indicating the good adsorption performance of NH4+-N on biochar [39].
Thermodynamic parameters, including Gibbs free energy ∆G0 (kJ/mol), entropy ∆S0 (J/(K·mol)), and standard enthalpy ∆H0 (kJ/mol), can be used to estimate the temperature effect on NH4+-N adsorption onto the biochar and give an idea about the adsorption behavior and mechanism. The thermodynamic parameters can be obtained from the Freundlich model using the following equations [40]: where R is the gas constant, the value of which is 8.314 J/(K·mol); T (K) is the absolute temperature; and n and kF (µmol/g) are Freundlich constants. The slope and intercept of the plots of ln kd versus 1/T are used to calculate the values of ∆H0 and ∆S0.
Table 2 also presents the thermodynamic parameters calculated from Equations (7)–(9). The negative values of ΔG0 demonstrated the spontaneous nature and the feasibility of the adsorption of NH4+-N on KOH-activated biochar. In addition, the ΔG0 values became more negative with increasing adsorption temperature, confirming that adsorption is more favorable at higher temperature [35,41]. Meanwhile, the positive value of ΔS0 indicated the affinity of the biochar for NH4+-N. The positive ∆H0 reflected the endothermic adsorption of NH4+-N onto biochar [42], which is in agreement with the kinetics results (Section 3.2.3) that increased temperature favors the adsorption.

3.3. Characterization of the Biochar

The XRD patterns of the NaOH-activated biochar and KOH-activated biochar before and after NH4+-N adsorption are shown in Figure 6. All the four biochar samples exhibited analogous diffractogram patterns with a broad peak in the range of 20–30°. The broad peak was attributed to the characteristics of amorphous carbon, which was disorderly stacked up by carbon rings [46]. However, two sharp peaks at 28° and 41° assigned to sylvite (KCl) were found from the XRD pattern of KOH-activated biochar [12,47]. The sylvite formed in the biochar was presumably from the activator KOH. After adsorption, these peaks disappeared (Figure 6), which was mainly because of the ion exchange of K+ and NH4+ during the adsorption process [48].

This research was funded by the National Natural Science Foundation of China (31700515).

This work was kindly supported by the National Natural Science Foundation of China (31700515). 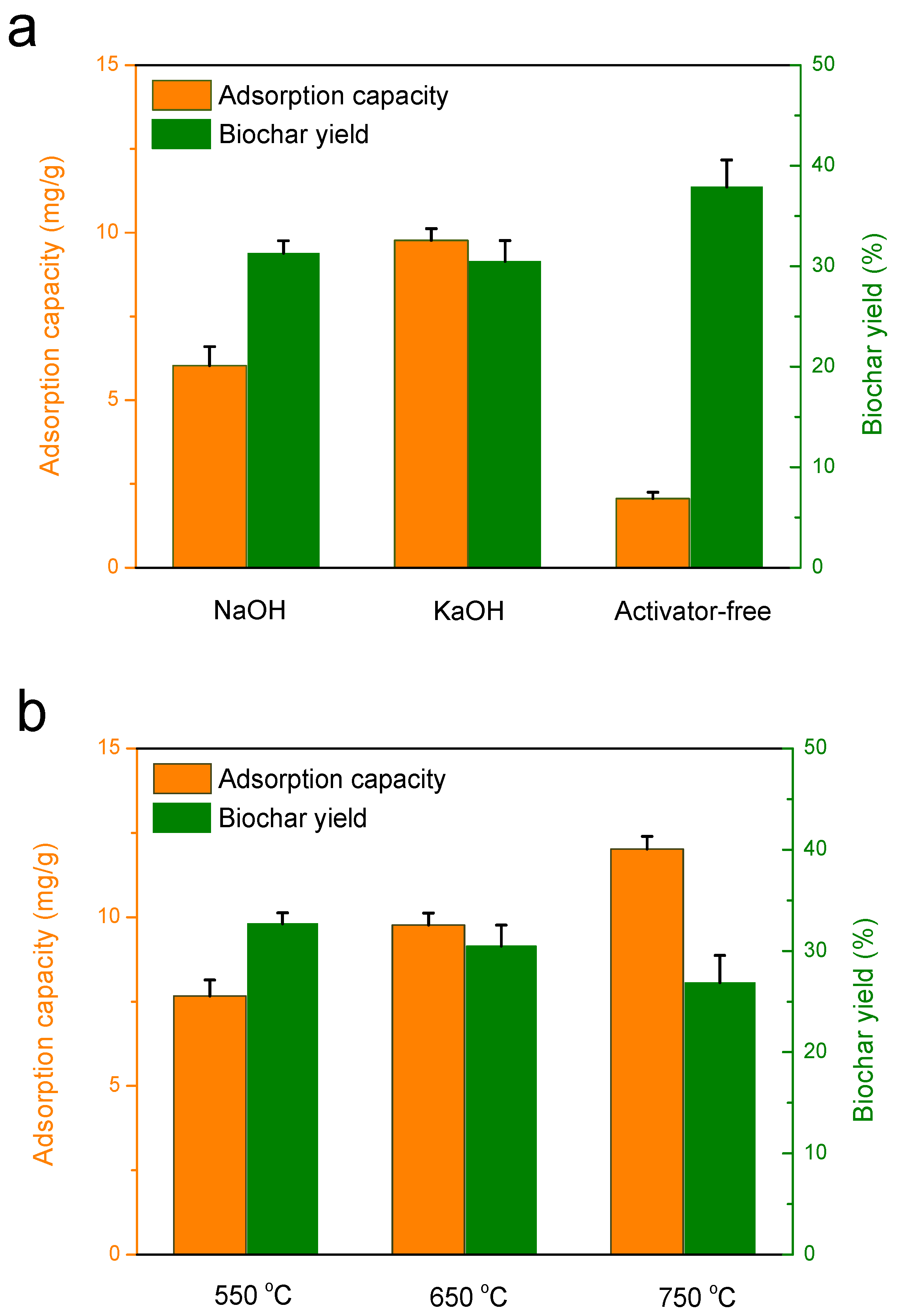 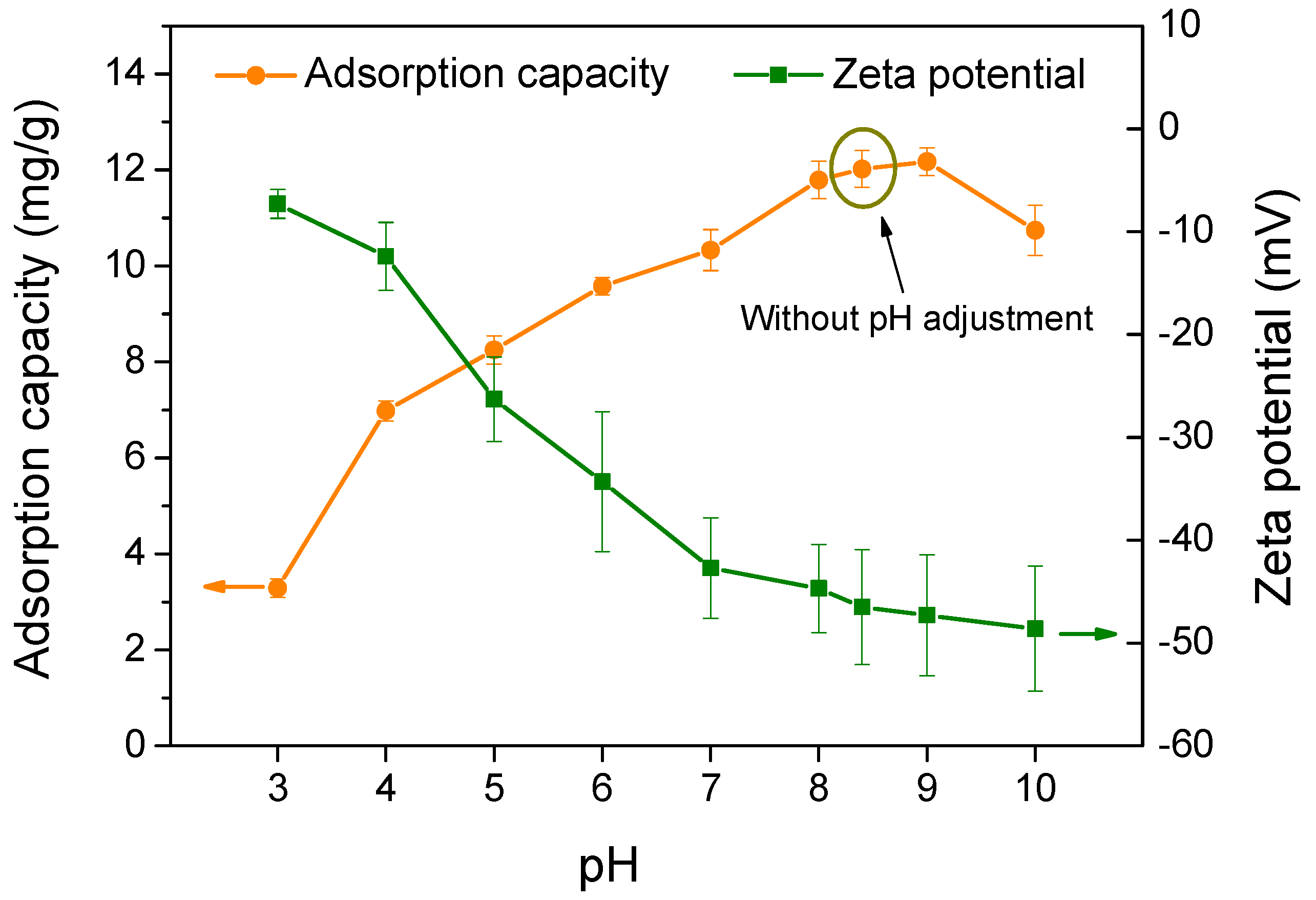 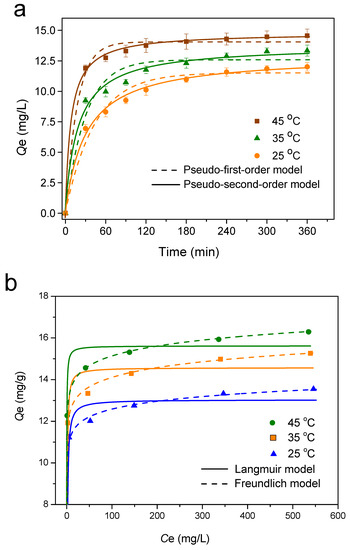