The development and evolution interest of innovative study in the area of technology science led to increasing the production of improved and modified machine tools such as synthetic lubricants and pored bearings, etc. The performance of pored bearings can be compared with the standard bearings because they have a feature like self-lubricating, which enhances their life span. The micropolar fluid is one type of fluids, which include couple stresses and the local rotating inertia. The theory of micropolar fluid is a subject of interest of several tribologists. The theory of micropolar fluid was revealed to the world by Eringen [1]. He described that the micropolar fluid has some unique advantages, such as the modeling of a wide variety of fluid flow through several media. Rashad et al. [2] reported the analytical solution for heat and mass transfer of micropolar fluid flow over a moving vertical plate in a porous medium. Li [3] derived the modified Reynolds equation for the porous media applying the Brinkman-extended Darcy equation. Rashad et al. [4] explained the heat and fluid flow characteristics of micropolar fluid flowing through a porous moving surface. They applied a uniform heat flux condition to drive the general expressions of different parameters. Isa et al. [5] and Bhatt et al. [6] analyzed the performance of one-dimensional porous slider bearing by developing the generalized Reynolds equation in case of micropolar fluid. Rashad et al. [7] investigated the flow of micropolar fluid over a stretchable surface, and they found that the micropolar fluid-induced drag decline and enhances the wall couple’s stress and the heat transfer rate of the stretched surface. Under squeeze film lubrication, Rashad et al. [8] clarified the skin-friction coefficient and heat transfer rate boosts and wall couple stress declines if the micropolar fluid vortex viscosity parameter grows in case of micropolar fluid flow on a vertical plate. Sinha et al. [9] explained that the micropolar fluid possesses enhanced viscosity especially in thin-film lubrication, which is a singular characteristic of micropolar lubricant. Rashad et al. [10] investigated the micropolar fluid flow through a horizontal circular cylinder.
On the other hand, the capability of heat transportation is required to meet the recent request of energy, and this can be achieved by employing liquid with its more impressive thermophysical features. The pioneering act on nanofluid was carried out by Choi [11]. Such type of fluids is the combination of nanoparticles in a mixture of base liquid. An augmentation in heat exchange using nanomaterials is affected by various mechanisms like sedimentation, Brownian motion, insertion of particles, transport of ballistic conduction, and thermophoresis. Nanomaterials possess fundamental features due to which it is essential in several applications regarding heat mechanisms like fuel chamber, cooling engine automobile, hybrid-electric engines, pharmacological method, boiler gas outlet, local refrigerator, temperature control, and crushing processes. Chamkha et al. [12] carried out the aspect of nanofluid mixed convective flow past a radiate cone in a porous medium. The investigations of nanofluids flow by combined convective past cylinder and sphere saturating porous medium were studied by Nazar et al. [13], Tham and Nazar [14], Tham et al. [15] and Rashad et al. [16]. Tlili et al. [17] examined the magneto-nanofluids flow past a porous stretching cylinder with multiple slips and radiation effects. Mabood et al. [18] analyzed the nanofluid forced convective flow across a circular cylinder. However, various attempts have been established about the use of nanofluids to enhance heat transfer [19,20,21,22,23].
Propelled by the previously mentioned investigations, the intention here is to analyze the mixed convective flow of a micropolar nanofluid past a horizontal circular cylinder in a saturating porous medium employing convective boundary conditions. The representative outcome for the velocity, temperature, friction coefficient, and Nusselt number are explaining the influences of the nanoparticles volume fraction, Biot number, mixed convection, and micropolar parameters.

In this section, a model is developed to study the micropolar nanofluid flow through a horizontal circular cylinder of radius, a saturating non-Darcy porous medium using convective boundary conditions. The nanofluid in current exploration is composed of micropolar fluid with alumina (A or titania (. The graphical view of the problem and the coordinate system of such a flow model are exhibited in Figure 1. The flow is assisting when Tf > T∞ and opposing when Tf < T∞. The velocity of the external flow is assumed to be , whereas the heat transfer coefficient hf is supposed to be temperature-dependent. Also, both nanoparticles and micropolar fluid are considered to be in dynamic and thermal equilibrium. These assumptions lead to the following expressions: (see Merkin [24] and Nazar et al. [25]). subject to the boundary conditions;
The second last term on R.H.S. of Equation (2) shows the influence of the thermal buoyancy force, with positive and negative signs pertaining to the buoyancy assisting and opposing flow regimes, respectively. To obtain the non-similar result, use the following dimensionless variables;
In the present work, the following thermophysical relations are utilized [26];
Here φ is nanoparticles volume fraction. The effective thermal and physical properties of nanofluids have been reported in reference [22]. Using Equations (6)–(7) in Equations (1)–(4), one can have.
The dimensionless boundary conditions become: where λ is the mixed convection or buoyancy parameter, Gr is the Grashof number, ε is the permeability parameter (porous medium parameter), ∆ and B are the material parameters, Bi is the Biot number, and Pr is the Prandtl number. These dimensionless numbers can be written as;
It is important to note that and show the assisting and opposing flows, respectively.
According to [25], the stream function ψ can be defined as , and then, Equation (8) is satisfied. Using the following transformations.
Into Equations (8)–(10), we get:
The accompanying non-dimensional boundary conditions become:
Finally, the expressions for the drag friction Cf and local Nusselt number (Nu) can be written as:

Following Sparrow et al. [22,23], for the first level of truncation, it is assumed that the zeta derivatives in Equations (15)–(17) are neglected, and the equations can be rewritten as:
Subject to the same boundary conditions (18).
Equations (23)–(25) are solved numerically with the boundary conditions (26), and similar solutions are obtained.

Following Sparrow and co-workers [22,23], all the terms are retained in Equations (15)–(17) without any approximation and new auxiliary functions are assumed which are defined by:
Using these functions, Equations (15)–(17) can be re-written as:
With the same boundary conditions (18).
Differentiating Equations (25)–(27) and boundary conditions (18) with respect to and neglecting derivatives again, we get:
With additional boundary conditions.
The system of nonlinear ordinary differential Equations (28)–(30) with boundary conditions (31) can be solved numerically using the Runge-Kutta-Fehlberg method of seventh order. In this method, twelve evaluations are found to be enough for each step. For higher accuracy, this method provides the most efficient results. The step size and a convergence criterion of were used in the numerical computations. The asymptotic boundary conditions, given by Equations (31), were replaced by using a value of 12 for the similarity variable as follows.
The selection of guarantees that all numerical results approached the asymptotic values accurately. For further details, readers are advised to see refs [27,28].

The following conclusions were drawn from this study:
However, employing non-conventional fluids in the process of cooling is one of the most crucial study fields due to the importance of the coolant kind on the quality of the final product and the mechanical properties of the surfaces that have to be cooled. 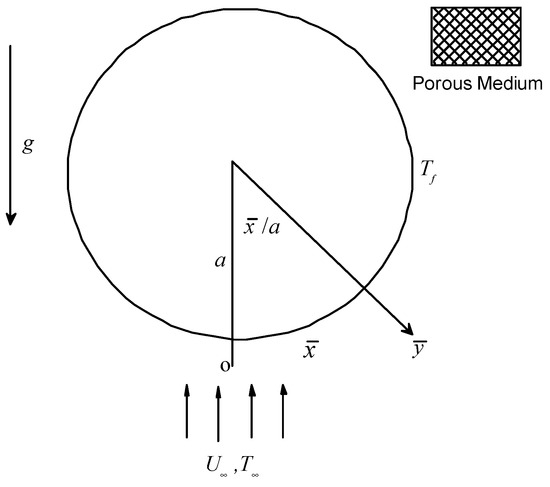 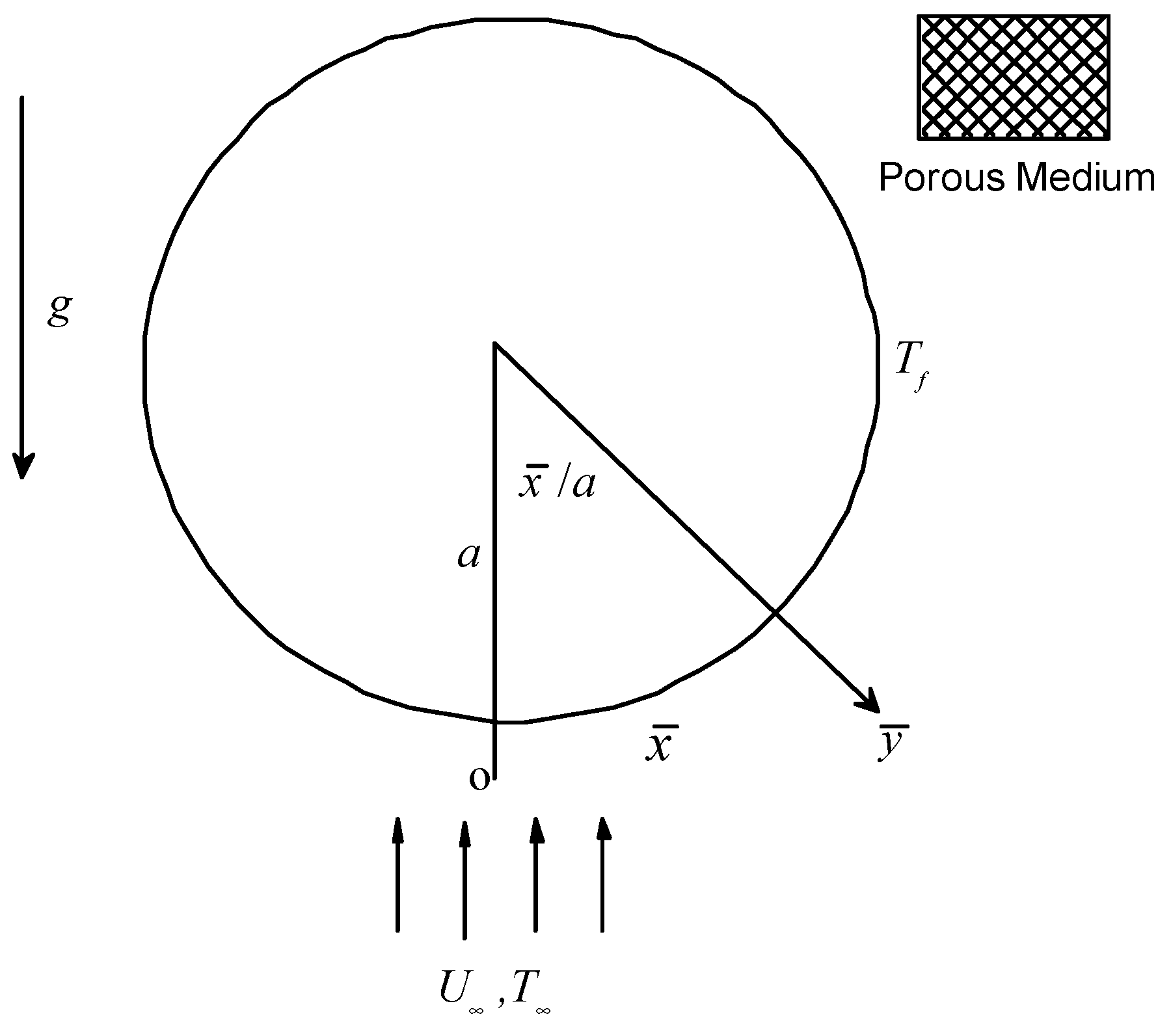