Evaluation of Whole-Body Vibration Exercise on Neuromuscular Activation Through Electromyographic Pattern of Vastus Lateralis Muscle and on Range of Motion of Knees in Metabolic Syndrome: A Quasi-Randomized Cross-Over Controlled Trial

Effects of Whole-Body Vibration Exercises on Parameters Related to the Sleep Quality in Metabolic Syndrome Individuals: A Clinical Trial Study

Metabolic syndrome (MetS) is an undesirable clinical condition with physiological, biochemical, clinical, and metabolic factors, including alterations on the level of the lipids on the plasma, arterial hypertension, central adiposity, insulin resistance (IR), and hyperglycemia. These conditions strongly contribute to increased cardiovascular risks (CR) [1], and they are interconnected by pathophysiological basis in low-grade chronic inflammation, increase of the risk of type 2 diabetes mellitus (T2DM), and all-cause mortality [2]. MetS is also related to the increased deposit of central adiposity and ectopic fat infiltration (muscle and liver) associated with overeating and/or sedentary lifestyles. These conditions are related to various deleterious consequences in late life [3,4].
Lian et al. [5], in a systematic review and meta-analysis, reported that the overall sleep quality as well as sleep complaints have significant positive associations with MetS. Massar et al. [6] and Tsai et al. [7] pointed out that this condition of the sleep is linked with cardiovascular disease. Massar et al. [6] reported in individuals with poor habitual sleep efficiency during the week before stress induction (Trier Social Stress Test) responded with higher stress-related elevations of blood pressure and cortisol levels as compared to subjects with high sleep efficiency. This relationship between poor sleep efficiency and elevated blood pressure persisted during the post-stress recovery period. In addition, poor sleep health is also associated with MetS and mental illness [8,9]. Iftikhar et al. [10], in a meta-analysis reported that some investigations demonstrated the association between sleep quality and MetS. It was verified that the poor sleep quality characterized by sleep fragmentation was related to impaired glucose metabolism, independent of sleep duration [11], however, the studies of the meta-analysis analyzed had not reached a consensus. Mesas et al. [12] reported that the difficulty falling asleep is associated with MetS and, in particular, with high blood pressure, and this association would be independent of sleep duration and would be not due to lifestyles related to poor sleep.
Ying et al. [5] reported in a systematic review and meta-analysis that the overall sleep quality, as well as sleep complaints have significant positive associations with MetS. Moreover, it is estimated [13,14] that 50% to 60% of obese and MetS individuals can present obstructive sleep apnea (OSA).
Some tools have been used to verify parameters (such as sleep duration, sleep inertia, sleep latency, snoring, disorientation or confusion during sleep, and daytime sleepiness) related to the quality of the sleep, such as the Pittsburgh Sleep Quality Index (PSQI) [15], Epworth Sleepiness Scale (ESS) [16] and the Berlin Questionnaire [17]. Moreover, the neck circumference (NC) [16] and waist circumference (WC) [18,19] have also been used.
There is moderate evidence supporting the use of physical exercise (PE) programs to counter MetS, although the optimal dose and type of PE is not well established. It is the main challenge for health care professionals to persuade individuals to have adherence to perform PE to the prevention and management of MetS [20]. In this case, it is relevant to consider the whole-body vibration (WBV) exercise, a modality of PE, an option. WBV exercise has been used as a clinical intervention in individuals with different clinical disorders, including MetS [21,22,23,24,25,26] and it can be considered a feasible, safe, and low-cost technique [27].
WBV exercise is generated in an individual who is on the base of a vibrating platform. It produces a mechanical vibration (MV) that is transmitted to the body inducing muscle contractions, with physiological responses like those produced by other types of PE, such as aerobic conditioning and strength training [28,29,30]. Biomechanical parameters, such as the frequency (f) and the peak-to-peak displacement (PPD) of the MV must be considered in the WBV exercise protocols [26,31,32].
As it is suggested that the sleep quality plays an important role in development of MetS [5] and putting together all of the previous considerations, to our knowledge, this is a first work aiming to study the effect of WBV exercise on the sleep quality of MetS individuals using the PSQI, ESS, and Berlin Questionnaire. It is hypothesized that the WBV exercise would be able in improving the sleep quality of MetS individuals.

In this cross-sectional and randomized study, 31 subjects were recruited and 19 performed the protocol (58.79 ± 12.55 years old, 1.62 ± 0.09 m height, 86.27 ± 15.03 kg body mass). The recruitment of the participants occurred from January 2018 to January 2019, in the Hospital Universitário Pedro Ernesto (HUPE), in the Universidade do Estado do Rio de Janeiro (UERJ). The WBV protocol was performed in the Laboratório de Vibrações Mecânicas e Práticas Integrativas (LAVIMPI).
This project was approved by the Research Ethics Committee of HUPE-UERJ with the number CAAE 54981315.6.0000.5259, the registry in the Brazilian Registry of Clinical Trials (ReBEC) with the number RBR 2bghmh and UTN: U1111-1181-1177. The participants of both groups signed a consent form.
Consolidated Standards of Reporting Trials (CONSORT) was used to report all of the different steps of the interventions utilized in this work [33].
In the randomization, a blinded envelope was used for the cards with the name of the groups: fixed frequency group (FFG) (control group) or variable frequency group (VFG) (WBVE group).
The inclusion criteria were individuals of both sexes, over 18 years of age, with MetS according to the International Diabetes Federation.
The exclusion criteria were: (i) individuals with high blood pressure (BP) levels (systolic blood pressure (SBP) ≥ 180 mmHg and diastolic blood pressure (DBP) ≥ 110 mmHg); (ii) cardiovascular disease (CVD) clinically evident in the last 6 months, manifested by a myocardial infarction or a stroke; (iii) a neurological, muscular, or rheumatologic disease that difficulte the position of the individual on the vibrating platform; (iv) disabling clinical disease according to the evaluation; (v) speech therapy or respiratory physiotherapy in the last 3 months; (vi) body mass index (BMI) > 40 kg/m²; (vii) orthodontic therapy with intraoral device; (viii) individuals who refuse to sign the consent form.
The participants declared that they were sedentary. They were instructed to continue their daily activities, dietary habits, and medications during the period of the investigation. The drugs used by the participants of both groups were diuretics, beta blockers, calcium channel blockers, angiotensin converting enzyme inhibitors, and angiotensin receptor antagonists.

All of the measurements were performed in the same location, at room temperature. Height and body mass were measured on a digital balance (MIC 200 PPA, Micheletti, São Paulo, Brazil). The BMI was calculated by dividing body mass (in kg) by square of height (in m) [34]. WC was obtained with a flexible measuring tape connecting the midpoints between the last costal arch and iliac crest, at the end of the soft exhalation and in the orthostatic position [34]. NC was obtained using a flexible metric tape just below the prominence of the larynx [35].
An automated device (OMRON, model HEM-7113, Dalian, China) was utilized to record the SBP and DBP (mm Hg), and the HR (beats/min) was measured on the left arm of seated patient after a 10-min rest. Three measurements were performed with 1 min of rest after each measurement. The mean of these 3 records of SBP and DBP and HR was used in the analyses of the WBV exercise group and the control group [36]. These evaluations were performed before and after the 6-week intervention in both groups.
The data of these parameters were expressed in mean and standard derivation and the Wilcoxon rank test was performed.

The PSQI [15] was used to assess sleep quality and disturbances over a 1-month period. This questionnaire is composed of 19 self-rated questions and 5 questions that should be answered by bedmates or roommates. The 19 questions are separated into 7 categories and there is a score from 0 to 3. The components of this questionnaire are subjective sleep quality, sleep latency, sleep duration, habitual sleep efficiency, sleep disturbances, use of medication, and daytime dysfunction. The maximum PSQI score is 21 points. Higher scores indicate poor quality of sleep [37].
The ESS [16] is composed of 8 self-reported questions and it is used to assess the self-reported level of daytime sleepiness [38]. These items have a four-point scale (0 indicating “would never nod off” and 3 indicating a “strong chance of nodding off”). The questionnaire questions are related to daily activities. The questionnaire score ranges between 0 and 24. Higher total scores are related to more sleepiness [39].
The Berlin Questionnaire [17] has been proposed as a tool in screening OSA and validated in primary care. The subjects were classified into high risk (if there were 2 or more categories where the score was positive), and low risk (if there was only 1 or no categories where the score was positive). The percentage os individuals with high risk to OSA was calculated in both groups [40,41].
The PSQI, ESS, and Berlin Questionnaire were only measured before and after the 6-week intervention in both groups.

For the sample size calculation, we used a standard deviation of 3.1, a margin of error of 2, the significance level of 5%, and a sample size of 9 individuals in each group, considering the PSQI [42].
The Wilcoxon signed-rank test with continuity correction was used in the analyses of the DBP, SBP, HR, WC, NC, the PSQI, and ESS. Descriptive statistics, median, and interquartile range (IQR) are also reported. Wilcoxon signed-rank test is a nonparametric test that was used to determine if paired samples, before and after intervention, have the same distribution. Fisher’s exact test was applied to the qualitative variable, Berlin, to asses if the proportion of people in each class (high risk and low risk) have been affected by the experiment. In the analyses of the PSQI and ESS, the values are expressed in scores. The statistical analyses of the Berlin Questionnaire considered only the percentage of individuals with a high risk to OSA.
All statistical analysis was performed using R software, version 3.5.0 [43] and the R Librarie Table 1 [44]. Results are considered statistically significant if the p-value is under 0.05 (p ≤ 0.05).

In conclusion, WBV intervention was capable of interfering with physiological mechanisms with effects on the WC and HR, leading to the improvement of the quality of sleep in MetS individuals. Although the calculated sample size determined a study with a small number of individuals, WBV exercise might be an important clinical intervention to the management of some factors associated with poor quality of sleep (FFG and VFG) and in the daytime sleepiness in MetS individuals with variable frequencies (5–16Hz) (VFG). However, further investigations are necessary to try to understand the mechanisms that underlines this positive effect of the WBV exercise in the studied population, as well as with individuals with sleep disturbances without MetS.

There is no conflict of interest. 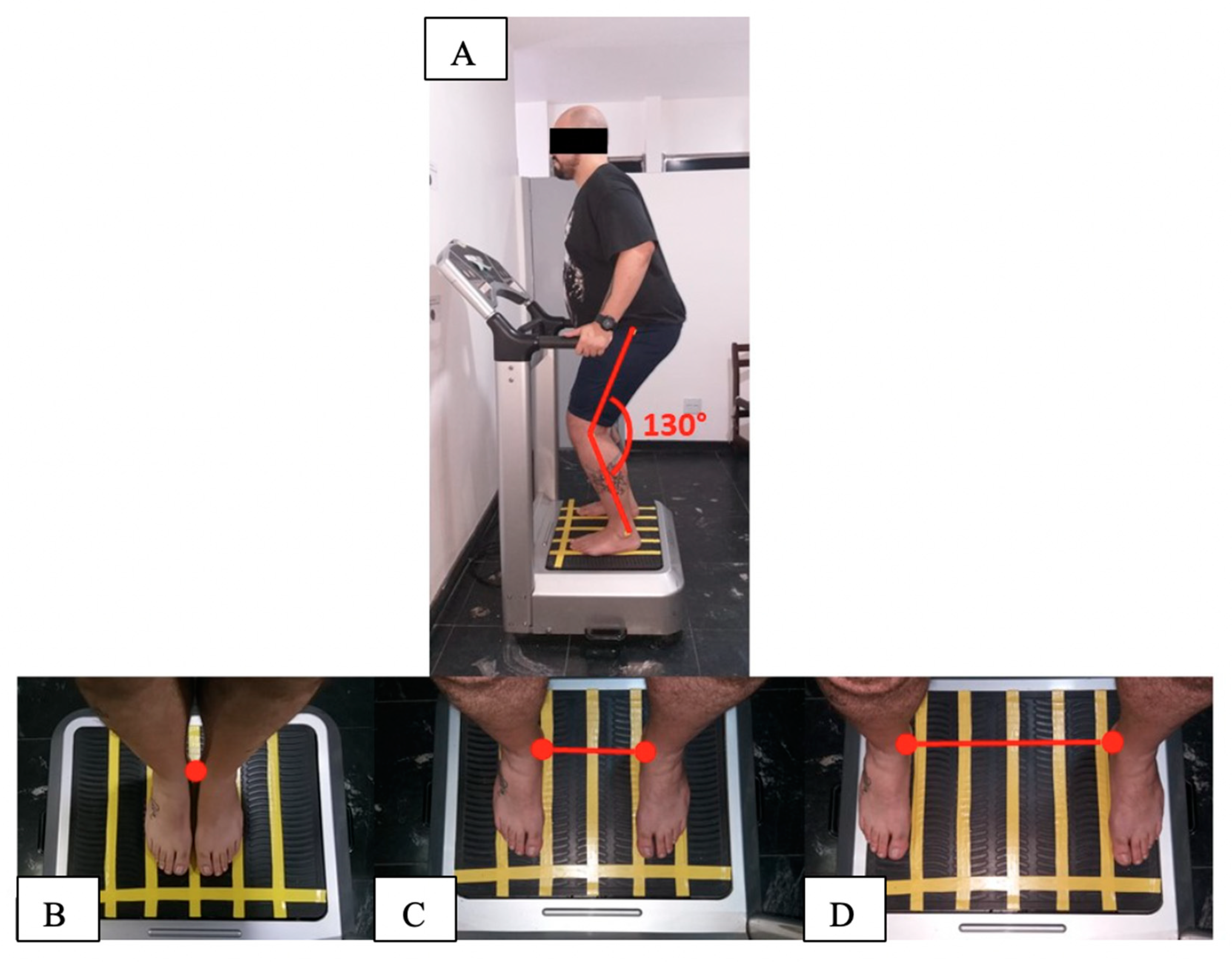 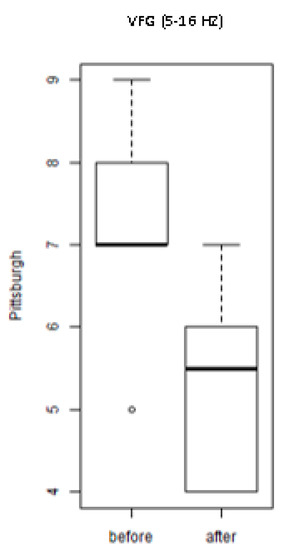 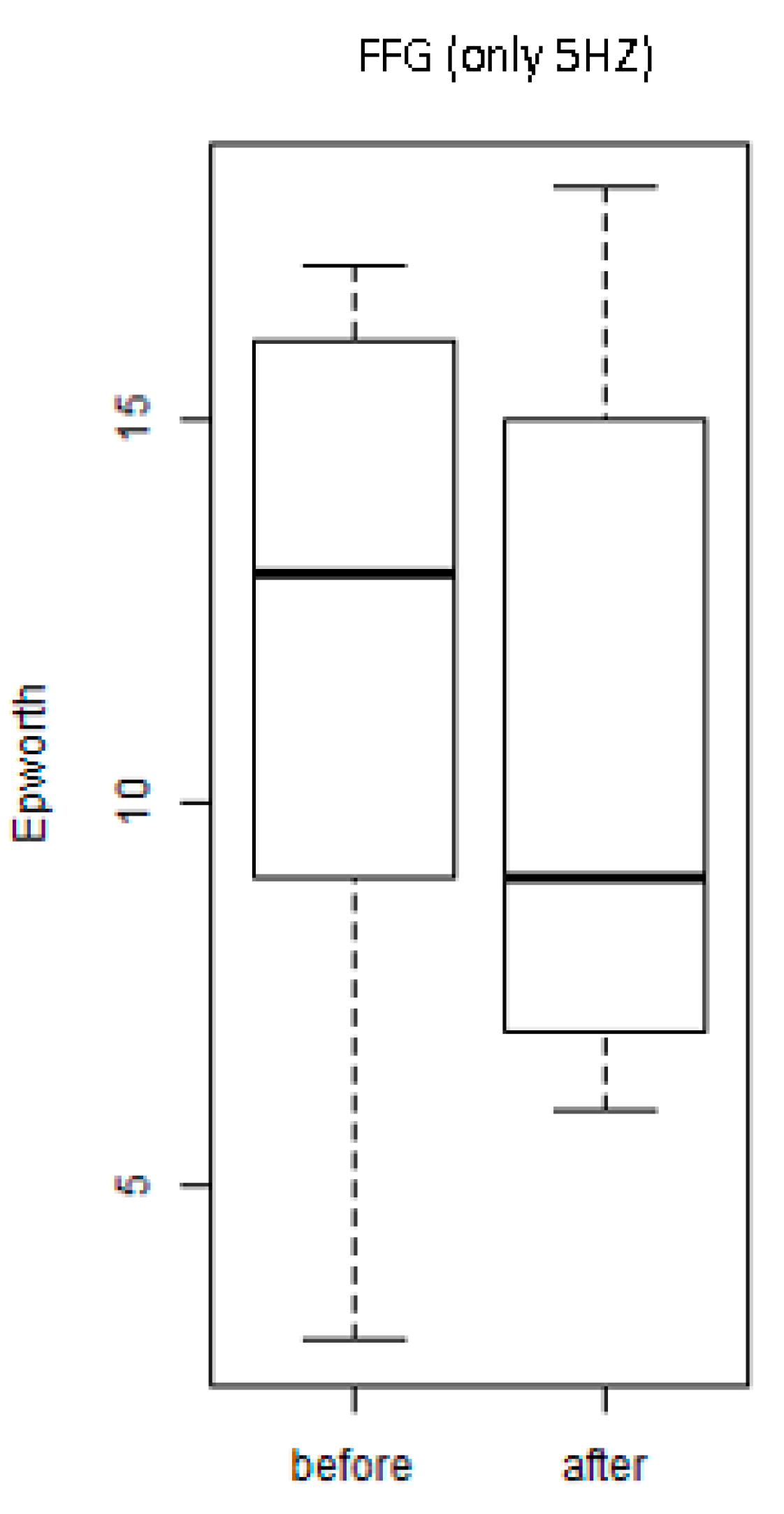