Generating Transparency in the Worldwide Use of the Terminology Industry 4.0

Recent developments in the area of cyber-physical systems (CPSs) and Internet of Things (IoT) are among the drivers for the emergence of the Industry 4.0 concept, setting new requirements for the architecture, technology, and design approaches of modern industrial systems. Industry 4.0 assumes a higher level of intelligence, and thus autonomy of the systems and subsystems, and a larger focus on the analysis of gathered data for further utilization. The Virtual Factory Open Operating System (vf-OS) project is intended to respond to some of these key challenges, in particular for the smart factory application domain. Complementarily, data and knowledge storage and processing are also in the scope of vf-OS. This article introduces the semantic management component of vf-OS, which aims to analyze the interrelations among stored entities, as well as to define the closeness among them to generate meaningful suggestions, which can be later used by other subsystems or operators in a user-friendly way. The semantic managing system makes use of non relational approaches, namely a graph database, which enables data to be represented as graphs for further semantic querying. The developed prototype and an illustrative application case are also presented. View Full-Text
Keywords: cyber-physical systems; Industry 4.0; semantic management; vf-OS; collaborative environment cyber-physical systems; Industry 4.0; semantic management; vf-OS; collaborative environment
►▼ Show Figures 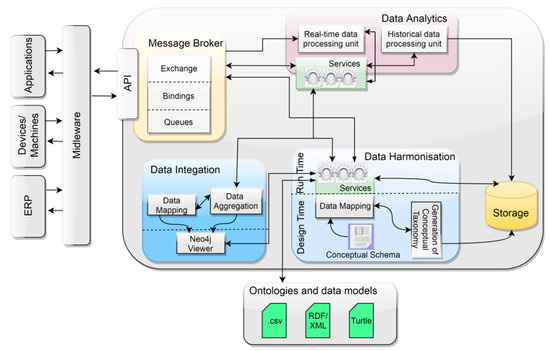