Palladium Nanocatalysts on Hydroxyapatite: Green Oxidation of Alcohols and Reduction of Nitroarenes in Water
Previous Article in Special Issue

Construction processes are intrinsically labor-intensive and accompanied by a high risk of accidents, and thus would benefit from the introduction of automated solutions. The construction industry, however, lags behind other fields in implementing such automation. Encouragingly, an additive construction method intended for concrete structures has recently been developed and applied to small building projects, such as pedestrian bridges [1,2,3]. Cementitious concrete is one of the most widely used construction materials worldwide, and is mostly in the form of ready-mixed concrete. Cementitious concrete placement, however, typically requires a formwork. Formwork installation costs a great deal in terms of material, human labor, and equipment resources. Also, the construction process is inevitably long term, due to the labor intensity of formwork installation and removal. In addition, the waste produced by formworks may have a negative impact on the environment [4].
The additive construction method was introduced to address these chronic issues associated with concrete work. This process is a computer-controlled construction technology that is used to build structures by layering extruded cementitious concrete without a formwork [5]. Also known as 3D concrete printing (3DCP), this process was first successfully applied in the construction industry by Khoshnevis [6], who developed a contour crafting (CC) method in which a fresh mixture is first extruded in a layer, and then additional layers are added on top. This free-form construction process is possible because the method does not require formwork to construct the cement concrete structure [7].
Compared to conventional construction technologies, 3DCP is commonly viewed as a sustainable design solution that offers almost unlimited possibilities for implementing geometrically complex designs. The technology is advantageous in various ways, such as in reducing construction cost and time, minimizing environmental degradation. The technology can also be used to streamline environmentally friendly construction processes, reduce industrial waste, and decrease energy consumption resulting from producing the raw materials used in formwork [8].
The 3DCP process consists of three components: a concrete printer, 3D modeling software, and printing material. The procedure draws from three specialized areas, including the mechanical, 3D design, and concrete materials fields [9]. Printing materials comprise the primary concern of the present study, especially cementitious mixtures. In recent relevant research, the most frequently examined materials for 3DCP contained Portland cement, sand, fly ash, and silica fume as base materials, along with small amounts of additives such as superplasticizers and viscosity-modifying agents [4,10,11,12,13]. Comparatively speaking, the information available on specific additive construction methods using redispersible ethylene-vinyl acetate (EVA) powder is very limited, even though EVA provides excellent adhesive strength and dynamic cracking resistance [14].
In a previous study conducted by the author, EVA-modified cementitious mortars were produced with various EVA/cement ratios. Then, the properties of fresh EVA-modified cementitious mixtures intended for use in additive construction via extrusion were experimentally investigated [15]. It was clear from this earlier work that EVA-modified cementitious mortars are applicable to the 3DCP process. However, it is still unknown whether or not three-dimensional printable EVA-modified cementitious mortars would be sufficiently stable after the 3DCP process. Thus, in the present study, three-dimensional printable EVA-modified cementitious mortars were experimentally investigated with regard to various properties associated with dimensional stability, such as elasticity and drying and thermal shrinkage. This work provides fundamental research data that will assist in the adoption of EVA-modified cementitious mortars for additive construction applications.

2. Summary of the Author’s Previous Research

The author, together with collaborators, studied the properties of fresh EVA-modified cementitious mortars as possible materials for use in additive construction [15]. EVA is easier to handle than polymer in a liquid form (i.e., latex or emulsion types), especially when producing mixtures onsite. This is because EVA comes in a powder form. Also, a premixed package that is ready to use onsite can be produced in the factory. Hence, EVA was selected as the object of this series of studies. The main results obtained are as follows.
Determining the optimal flow of EVA-modified cementitious mixtures is of the utmost importance for determining the optimum mix ratio. In the previous study, the author employed a trial-and-error procedure to investigate the ideal flow that would meet all buildability requirements. The flow of each EVA-modified cementitious mixture was tested at 5% intervals ranging from 50% to 75%, in order to determine the optimum state. Through this trial-and-error process, the optimal flow was determined to be 65%, as shown in Figure 1 and Figure 2. This flow is considerably lower than the 110% ± 5% level, which is the standard flow range applied when producing specimens for compressive strength testing under American Society for Testing and Materials (ASTM) C109/C109M-02: Testing Method for Compressive Strength of Hydraulic Cement Mortar [16].

Vebe time, compacting factor, slump, and flow test methods are all flowability test methods. Among these, the flow test method is preferable if the workability of the mixture to be tested is to be very high [17]. The results of the flow test conducted for this study showed that the flow increased when the EVA/cement ratio was increased, as shown in Figure 3. This means that the level of the flow loss decreased when the EVA/cement ratio was increased. This result was quite favorable because it indicated that flowability could be secured. Also, the test results showed that the flow consistency improved due to a dispersing effect of the surfactants in the polymers. This effect originated from the ball-bearing action of the polymer particles and entrained air when the EVA powder (which was re-dispersible) was dispersed in the water as the mixture was produced [18].
Open time is the minimum amount of time that a material can be used without a loss of performance. In 3DCP, open time starts at the beginning of extrusion and ends at the time at which there is no more extrusion due to decreased flowability. Hence, open time is the best way to show changes in a mixture’s workability over time. Open time can be determined by plotting horizontal lines, as shown in Figure 3. In Figure 3, (1) is the reference point at a 65% flow, and (2) is the reference point at a 50% flow, indicating that the mixture can no longer be extruded through the 3DCP process. According to the test results, a longer open time was secured when the EVA/cement ratio was increased. These results demonstrate that the time identified was sufficient to complete the 3DCP process. This extended open time originated from a delay in the initial setting. In other words, the initial hydration reaction of the cement was inhibited by the formation of a polymer film [19].

The materials used were the same as those employed in the previous study. Ordinary Portland cement, silica sand, fly ash, silica fume, superplasticizer, and viscosity modifying agent were used. Ordinary Portland cement was used as the main binder, fly ash was employed to improve flowability and to inhibit the heat of hydration in the early hydration stage. Also, silica fume was employed to improve the strength.
The characteristics of the materials used in this study are shown in Table 1, Table 2, Table 3, Table 4, Table 5 and Table 6. The EVA used as a modifier was a white powder. Its product data and chemical constitution are presented in Table 7 and Figure 5, respectively.

Three test specimens were produced for each EVA/cement ratio (i.e., test variable). Among each set of three test results produced for each EVA/cement ratio, the middle value was selected because all of the results appeared continuously. Casting the specimens with mortar directly extruded into the formwork created many voids, resulting in significant data errors. Hence, ASTM C109/C109M-02: Standard Test Method for Compressive Strength of Hydraulic Cement Mortars [16] was applied to produce the specimens. These specimens were cured at a temperature of 23 ± 2 °C and a relative humidity of 65% ± 5%. Also, the cylindrical specimens used for the compressive stress–strain tests were ground for planeness before the tests were conducted.

The modulus of elasticity was measured with respect to ASTM C 469M-14: Standard Test Method for Static Modulus of Elasticity and Poisson’s Ratio of Concrete in Compression [20]. Cylindrical specimens (50 mm in diameter, 100 mm long) were employed in the tests. Loads were applied via the load-controlled method and the rate of application of compressive stress was 0.25 MPa/s. The elastic modulus equation applied in the present study is shown in Equation (1), and the input data were extracted from compressive stress–strain curves. The strain was measured using an electric resistance-type strain gauge and data logger (Tokyo Sokki, TDS-602). A schematic of the system is presented in Figure 6. where E is the chord modulus of elasticity (MPa), S1 is the stress corresponding to a longitudinal strain of 0.00005 (MPa), S2 is the stress corresponding to 40% of the ultimate load (MPa), and ε2 is the longitudinal strain produced by stress S2.

Drying shrinkage tests were carried out with respect to ASTM C596-01: Standard Test Method for Drying Shrinkage of Mortar Containing Hydraulic Cement [21], using an environmental chamber held at a temperature of 23 ± 2 °C and relative humidity of 65% ± 5%. The specimen dimensions were 70 mm × 70 mm × 320 mm. The longitudinal strain was measured at the center of the cross-section using an embedded-type strain gauge (Tokyo Sokki, PMFL-series) and data logger (Tokyo Sokki, TDS-602) since placement. After 24 h curing in the molds with an air-tight plastic sheet placed on the top surface, the specimens were demolded for external drying; the shrinkage up to the first 24 h was also monitored to measure autogenous shrinkage. The procedure for installing the strain gauge is described in Figure 7.

Thermal expansion tests were carried out with respect to ASTM C531-18: Standard Test Method for Linear Shrinkage and Coefficient of Thermal Expansion of Chemical Resistance Mortars, Grouts, Monolitic Surfacings, and Polymer Concretes [22]. The temperature was increased from 25 °C to 80 °C once the thermal equilibrium was achieved throughout the specimen. The specimen dimensions and procedure for instrumentation were the same as in the drying shrinkage tests, shown in Figure 7. To determine the true thermal strain, thermal calibration was performed.

4.1. Stress–Strain Relationship and Modulus of Elasticity

The author is very grateful to former collaborators Kwan-Kyu Kim and Hee Jun Lee from Korea Conformity Laboratories and Kangwon National University for the assistance in conducting the experiment.

The author declares no conflicts interest. 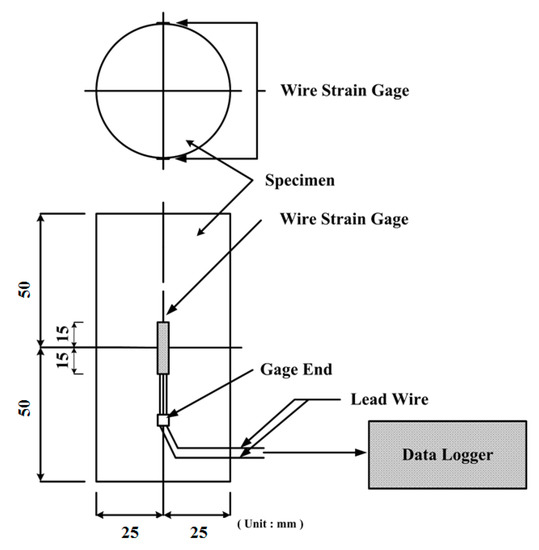 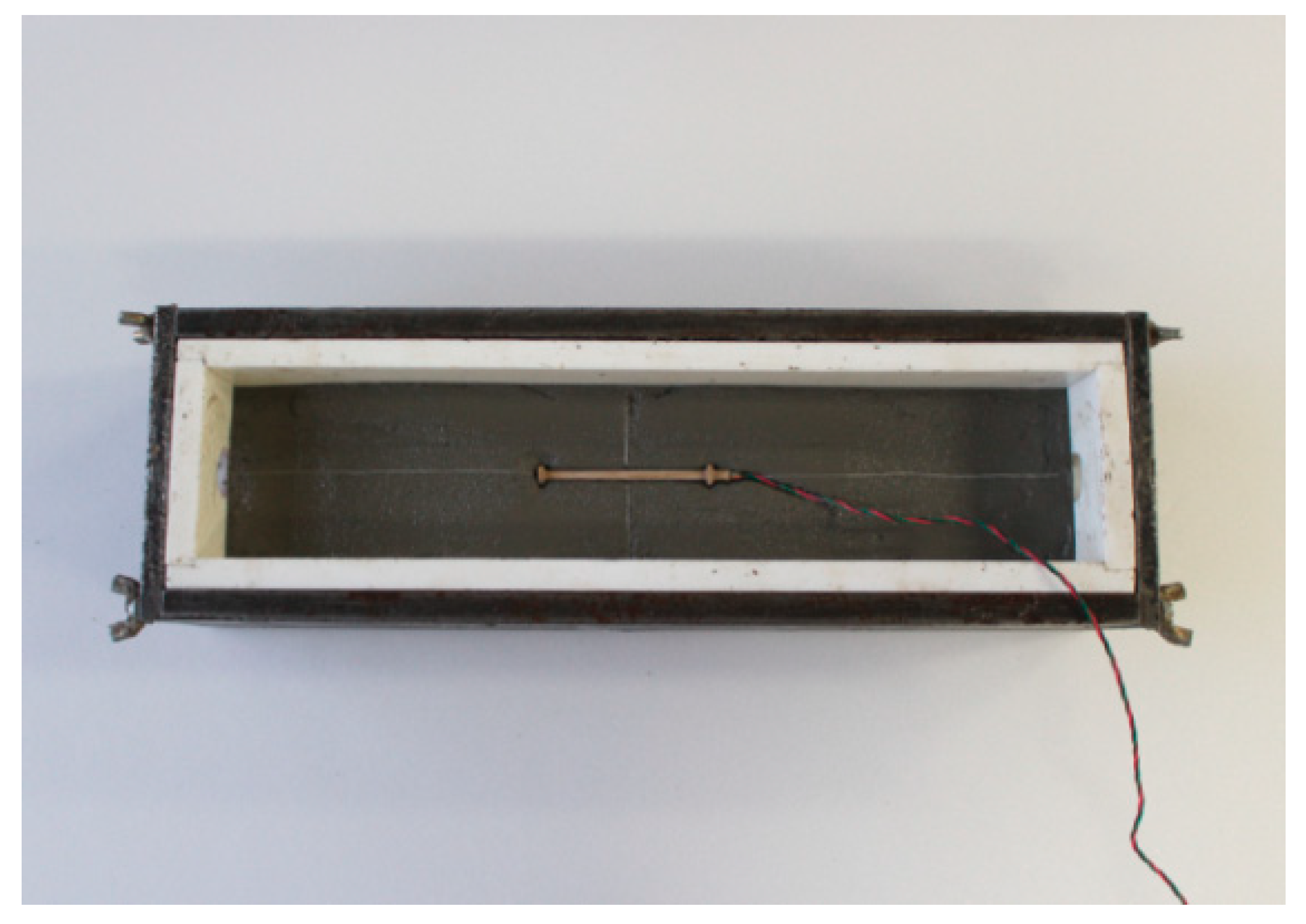 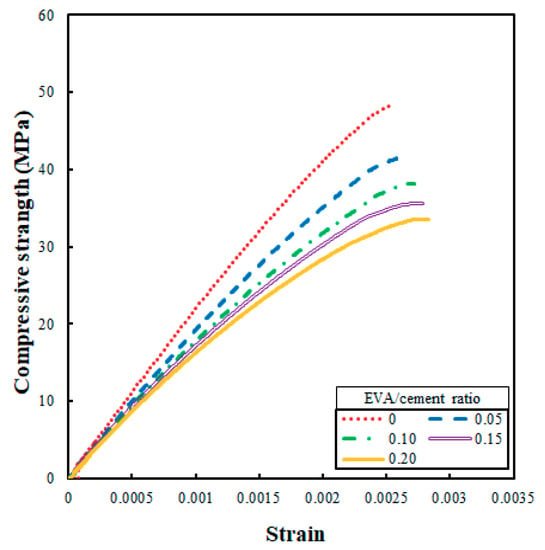 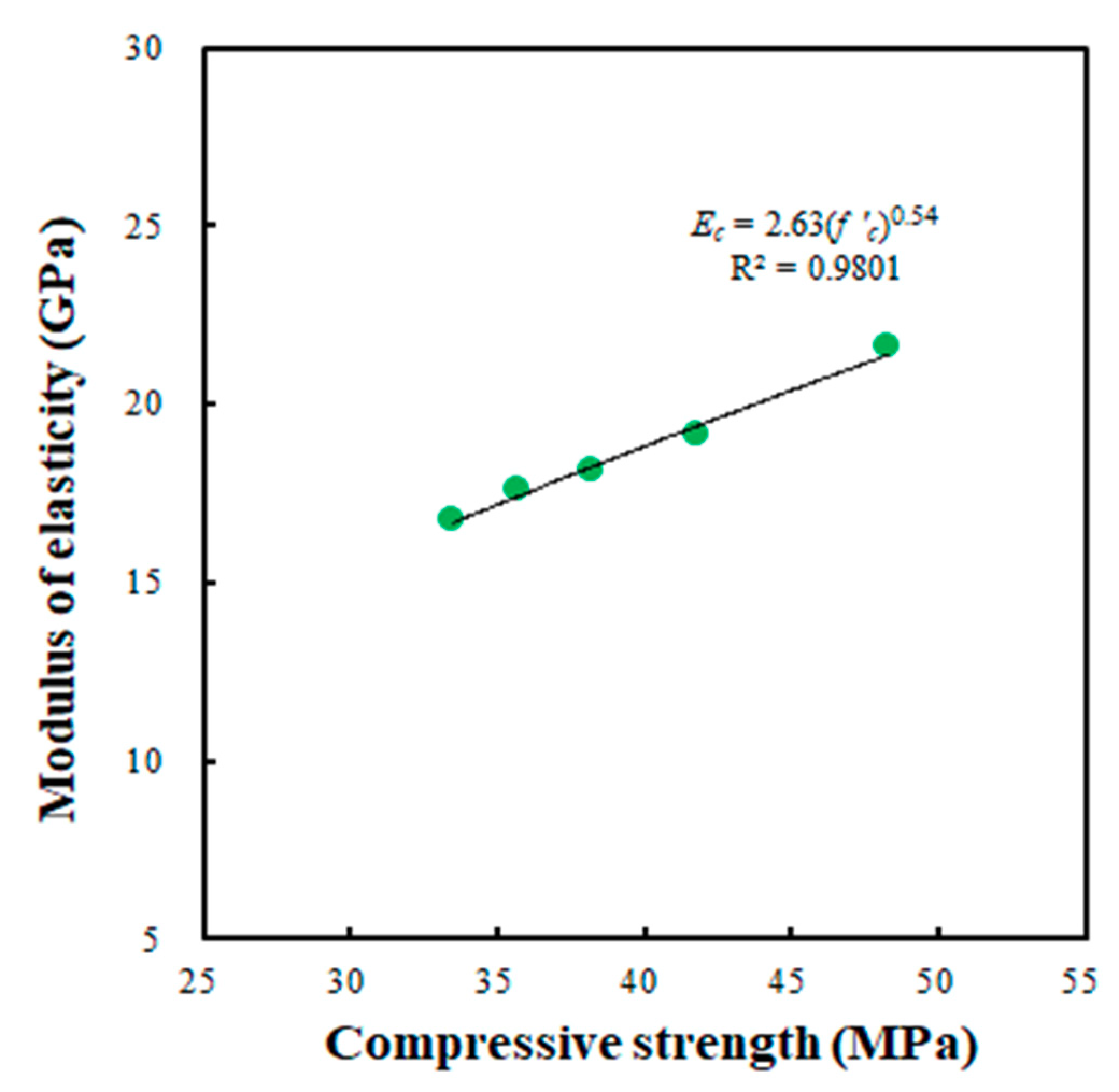 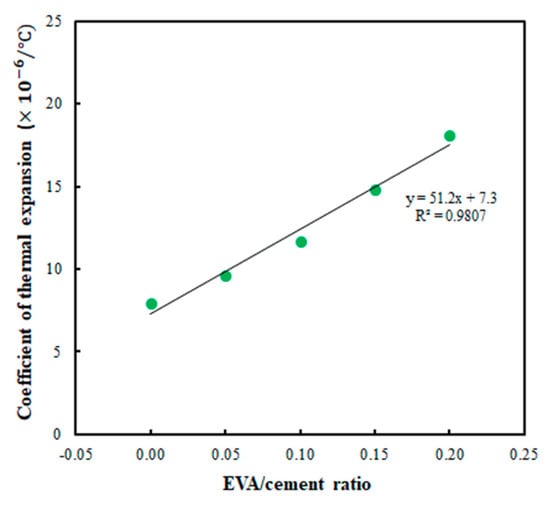 Table 8. Mix proportions of EVA-modified cementitious mortars (kg/m3).
Table 8. Mix proportions of EVA-modified cementitious mortars (kg/m3).
© 2019 by the author. Licensee MDPI, Basel, Switzerland. This article is an open access article distributed under the terms and conditions of the Creative Commons Attribution (CC BY) license (http://creativecommons.org/licenses/by/4.0/).
We use cookies on our website to ensure you get the best experience. Read more about our cookies here.
Accept
We have just recently launched a new version of our website. Help us to further improve by taking part in this short 5 minute survey here. here.
Never show this again