Perspectives in Liquid-Crystal-Aided Nanotechnology and Nanoscience

2. Modification of Physical Properties of LC Materials by Nanodopants

4. LC-Aided-Assembly and Self-Assembly of Nanomaterials

With increasingly improved medical techniques, it is expected that people will live longer. However, the current circumstances are not that promising. Due to the emerging problem of a “graying society” as well as the rapid spread of “illnesses of affluence,” chronic conditions such as overweight, hypertension, heart disease, diabetes, etc. are still severely threatening people’s health. Therefore, the advancement of more compelling techniques for immune detection of different kinds of disease biomarkers is necessary. LCs, which are susceptible to weak external stimuli, such as chemistry, solvent vapour, humidity or surface forces, have received increased attention for use in biological sensing since Abbott and his co-workers initiated the research field of using LC materials as sensing elements for detecting biomolecules [426]. The key idea of this study is using a nematic LC film with a specific alignment, either homogeneous or homeotropic, at an interface with an aqueous phase. Under polarizing optical microscopy, the LCs will show a particular texture. By introducing some “impurity” molecules into the aqueous phase, the alignment of the LC molecules at the interface will be altered due to the binding between the biomolecules and the doped impurity, thus leading to a texture transition (Figure 17). This transition is easily seen by the naked eye.
Such LC-based biosensors can localize biomolecules to the micrometre scale and the procedure can be executed under ambient light even without an external electric power source. All these advantages lend LC-based biosensors great potential for the next generation of high-sensitivity, low-cost and label-free bioassays. Up to now, various investigations of LC-based biosensors have been reported [427,428,429,430,431,432]. Very recently, Lee et al. reported a label-free protein (bovine serum albumin, BSA) quantitative detection by a dual-frequency LC (DFLC)-based biosensor [433]. The spectra of the dielectric properties of DFLC in the presence of BSA at varied concentrations were measured and analysed. They demonstrated that the difference in dielectric properties between the low- and high-frequency regimes was related to the concentration of BSA, which permitted a quantitative measurement of the BSA concentration.
The simplicity and versatility of LC-based biosensors and their sensitivity is restricted by the size and amount of biomolecules, which may restrict their applications in the bioassay range of low concentrations and trace molecules. It is thus significant to seek signal-enhancement strategies for LC-based sensors to circumvent the problem. Several studies have demonstrated that the disruption of the LC orientation can be enhanced by introducing nanoparticles, thus leading to an amplified optical signal [434,435,436,437,438,439,440] (Figure 18a,b). A recent study by Wei et al. demonstrated a nickel nanoparticle-assisted LC cell system that can be used to visualized the enzymatic activities between cholylglycine hydrolase (CGH) and cholylglycine (CG). The trace doping of nickel nanoparticles induced a uniform homeotropic LC alignment that could be disturbed by introducing CG to the binding-immobilized CGH surface. Such a system had a detection limit at the “10 pM” level, and could quantitatively define a working range from 0.1 nM to 1 μM [439]. The investigation by Kim et al. reported a different biosensor based on self-reporting and self-regulating LCs (Figure 18c,d). In this interesting work, the authors showed that a range of stimuli, including temperature, mechanical shear as well as cationic amphiphiles, can induce a continuous or transient release of microcargo (micro-particles or -droplets) that initially is trapped within the LC matrix. By pre-programming through an interplay of elasticity, electrical double layers, buoyancy and shear forces in diverse geometries, the LC matrixes could self-report and self-regulate their chemical response to targeted chemical, physical and biological events in particular ways. These LC materials can detect the weak mechanical shear stress generated by motile bacteria and then respond in a self-regulated manner via a feedback loop in order to release the minimum amount of biocidal agent required to cause bacterial cell death [441].

As one of the key features providing biological systems with unique physical and chemical properties, the self-assembly of biological materials, such as amphiphilic lipids, has been the focus of an increasing number of studies. Lyotropic LC droplets with diameters in the range of 100 nm, usually referred to as cubosomes and hexosomes, are potential candidates for constructing novel matrices mimicking biological systems in the formation of new nanoparticle carriers for delivering drugs and nutrition. These self-assembled nanostructures are spontaneously formed by biocompatible amphiphilic lipids, such as phospholipids, monoglycerides, glycolipids and urea-based lipids, mainly in water, and contained in a thin shell of amphiphilic block co-polymer (Figure 19).
Unlike traditional liposomes, which can only load a hydrophilic drug cargo and release it to the target immediately once the lipid membrane is broken, these LC nanoparticles have cores with equal amounts of polar and non-polar regimes, and thus can carry either hydrophilic or hydrophobic cargo, or even both simultaneously. At the same time, the interior drugs are protected from chemical and enzymatic degradation during the passage through the digestive system to the site of release, leading to a sustained release over time [15]. Due to such a slow release, the drugs are inclined to accumulate as much as possible in sickness-related tissues or cells to generate a maximal effect and reduce the negative effects on human bodies such as the toxicity of the drugs, making these LC colloidal nanoparticles particularly interesting in medical treatments [443,444]. Solid lipid nanoparticles (SLNs) have also attracted great attention as cosmetic and pharmaceutical formulations [445]. Due to their relatively small particle size but large surface area, SLNs possess very strong adhesive characteristics. This can induce film formation on the human skin, which may be helpful to keep the skin moist and even restore the previously damaged protective lipid film on the body through occlusion. Incorporation of active ingredients into a solid lipid matrix can provide protection against hydrolytic degradation, allowing drug release at a controlled rate. This implies either a transient or a continuous drug release, depending on the particle size and polymorphic transitions of the lipid matrix [446]. Continuous release is critical for active ingredients that may irritate the body if the concentration is too high or when a prolonged period of drug transport time is desired, whereas transient release will be helpful to improve the penetration of drugs. In addition to LC phases and solid lipids, a large variety of materials can be fabricated into drug-carrier nanoparticles. For instance, both biodegradable and non-biodegradable polymers have been used as drug carrier materials [447].

In this paper, we summarized the influence of nanoparticle doping on the electro-optical and other physical properties, of liquid crystals, including molecule alignment, viscosity, clearing point, or elastic constants, just to name a few of the properties introduced. Various kinds of nanodopants, such as ferroelectric nanoparticles, noble metallic nanoparticles, semiconductor nanoparticles and carbon nanoparticles, have been presented to induce modifications of the physical properties of LCs. However, these studies create an inconsistent picture of the beneficial effects of nanoparticles on the physical properties of LC hosts. This may be attributed to the effect of different nanoparticles’ size, shape, dispersibility and functionalization. To thoroughly understand the influence of nanoparticle doping on the physical properties of LCs, further systematic investigations are required. We further demonstrated the exciting photonic functionalities, including SPR effect, photothermal effect and lasing, of LC–nanoparticle composites. The intrinsic optical properties of nanoparticles can be effectively modified by a LC medium, leading to a variety of multifunctional photonic applications.
Various nanoparticle mesostructures, obtained either within distorted areas of LCs or topological defects, were discussed. The self-organization-assisted nanoparticle assembly within the disclination lines will effectively eliminate high-energy volume areas and reduce the elastic-free energy density of the LC system. Such an effect can even lead to a stabilization of the 3D blue phase defect lattice.
Additionally, we demonstrated the self-assembly of nanoparticles into lyotropic LC phases. Colloidal suspensions of anisotropic particles, including rods, tubes, disks, flexible chains and wires, can self-organize from the isotropic disordered to the nematic ordered phase as the concentration exceeds a critical value according to Onsager’s model. These lyotropic LC materials have intriguing physical properties and can be applied to various functional devices.
Finally, we briefly introduce the practical applications of LC–nanoparticle composites in biological systems. The aspects of biological sensors and drug delivery systems are of particular interest, and it is anticipated that this area of novel liquid crystal research will attract much interest in the liquid crystal community and soft matter community in particular.

Y.S. conceived and wrote the manuscript, and prepared the figures and reproduction permissions. I.D. helped with discussing and writing the manuscript.

Y.S. would like to thank the China Scholarship Council (CSC). 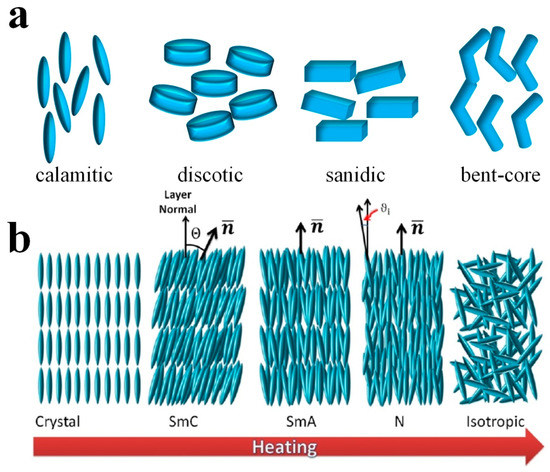 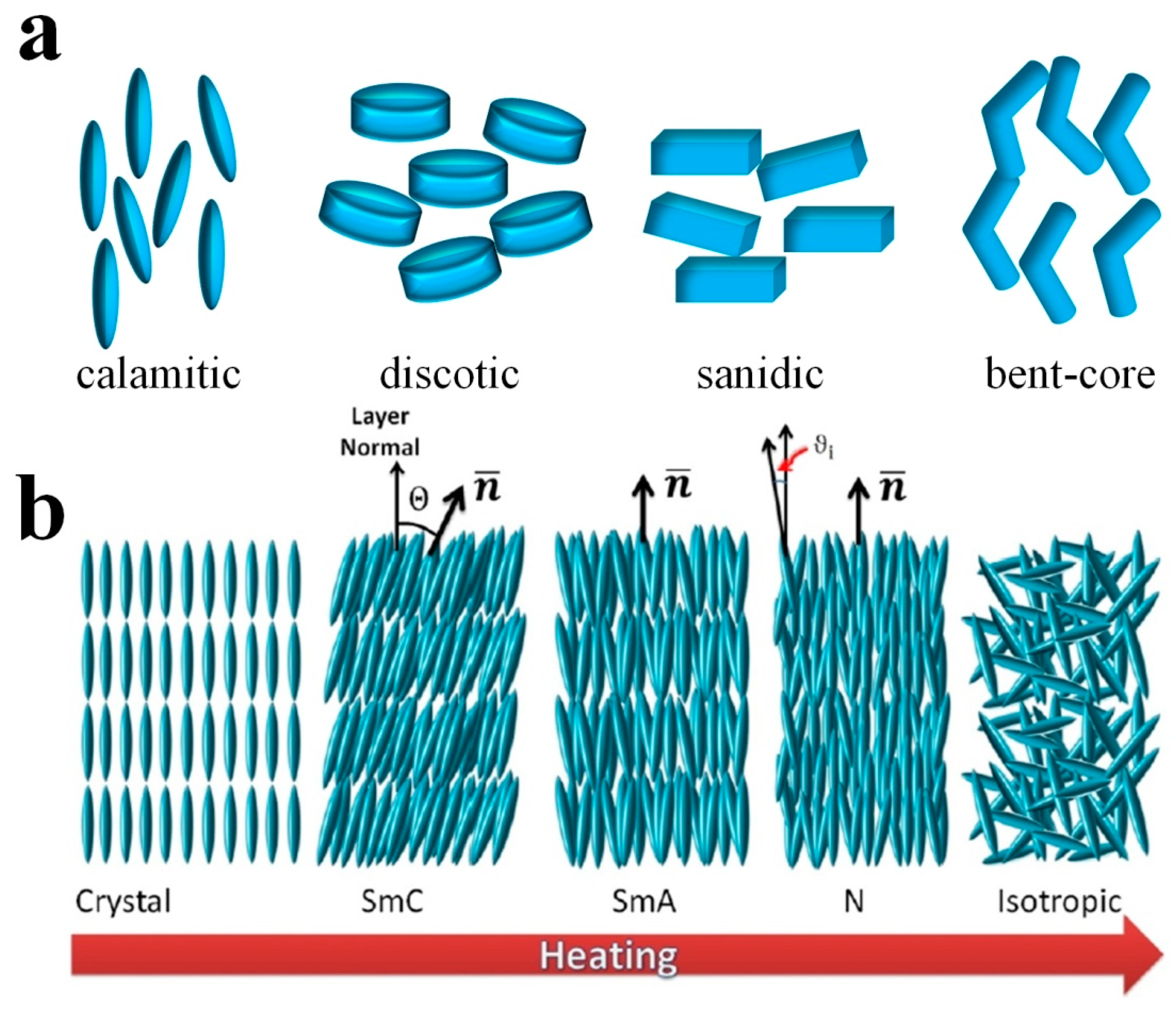 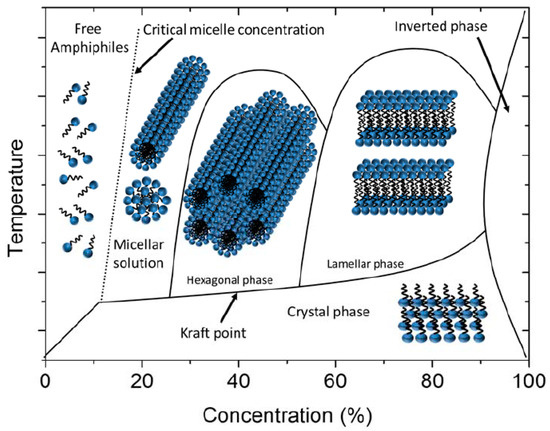 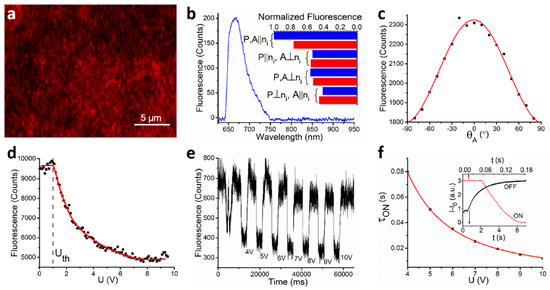 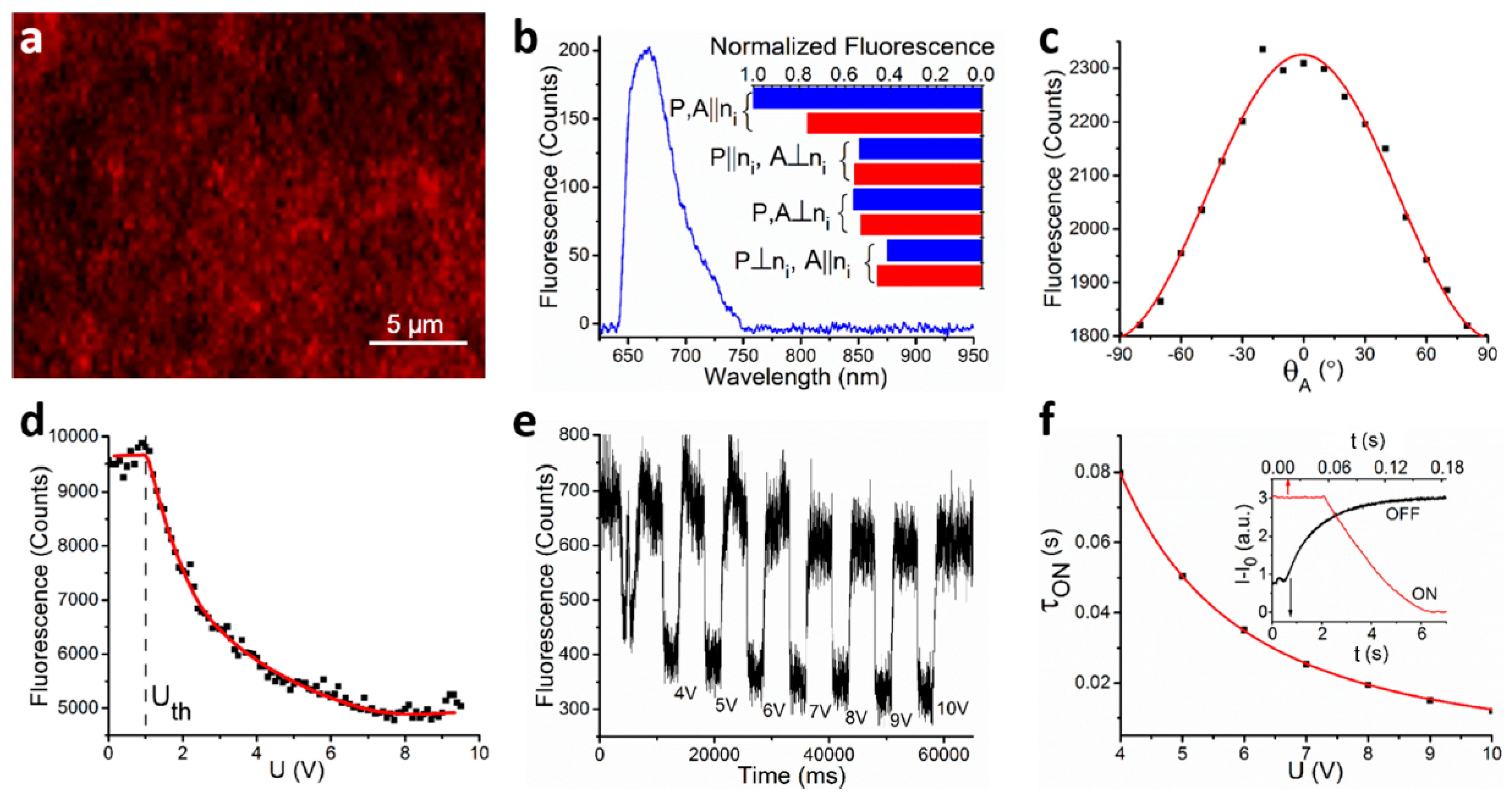 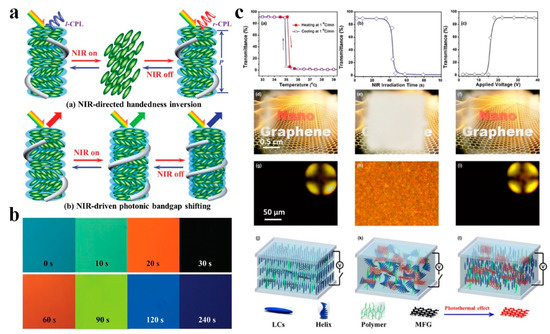 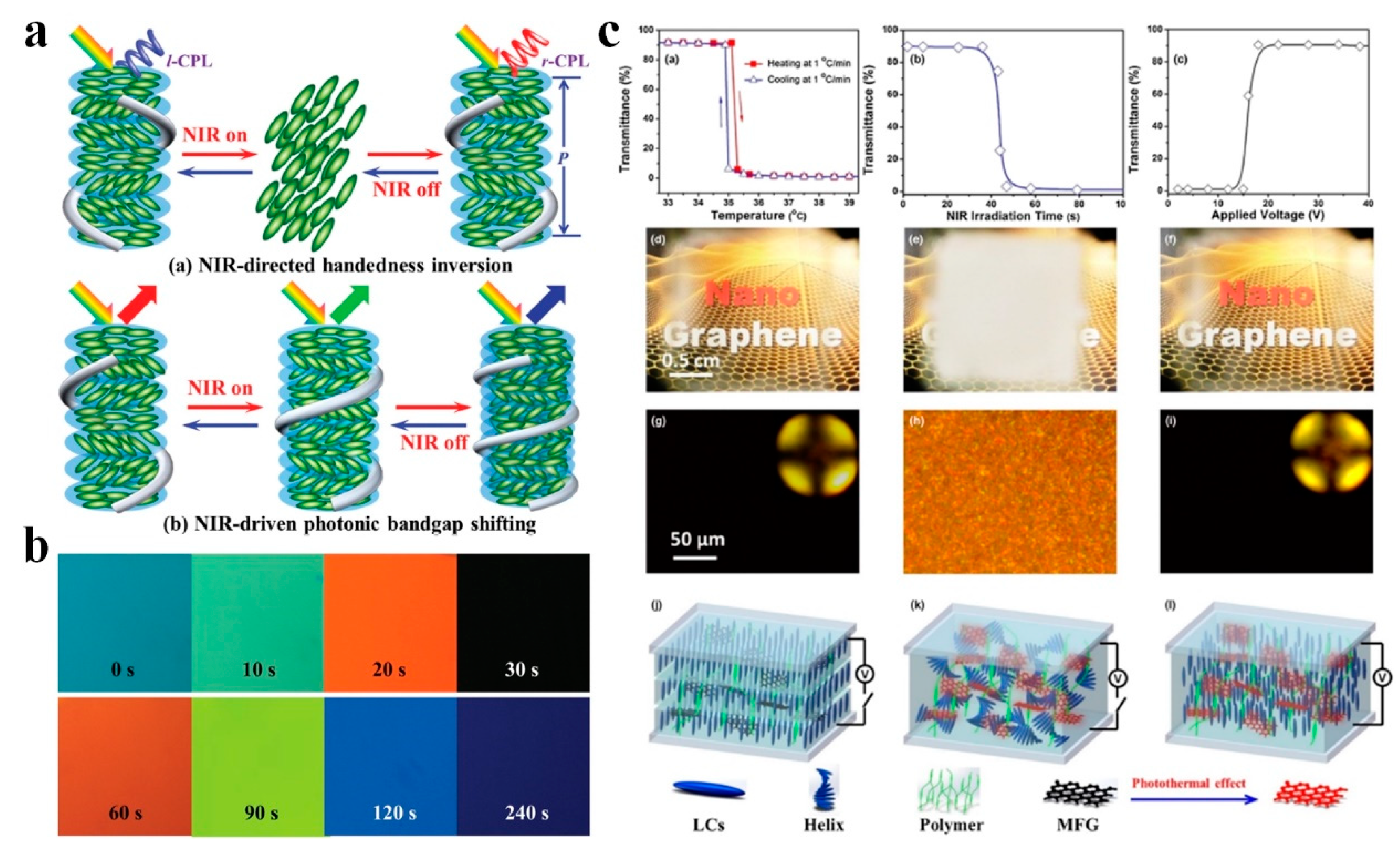 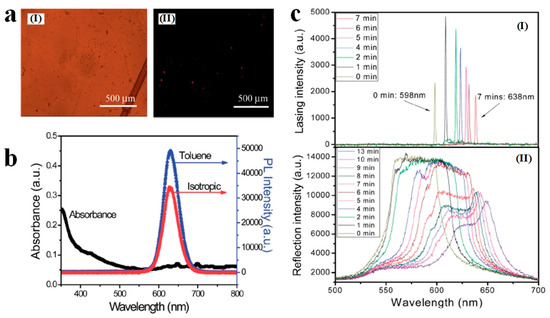 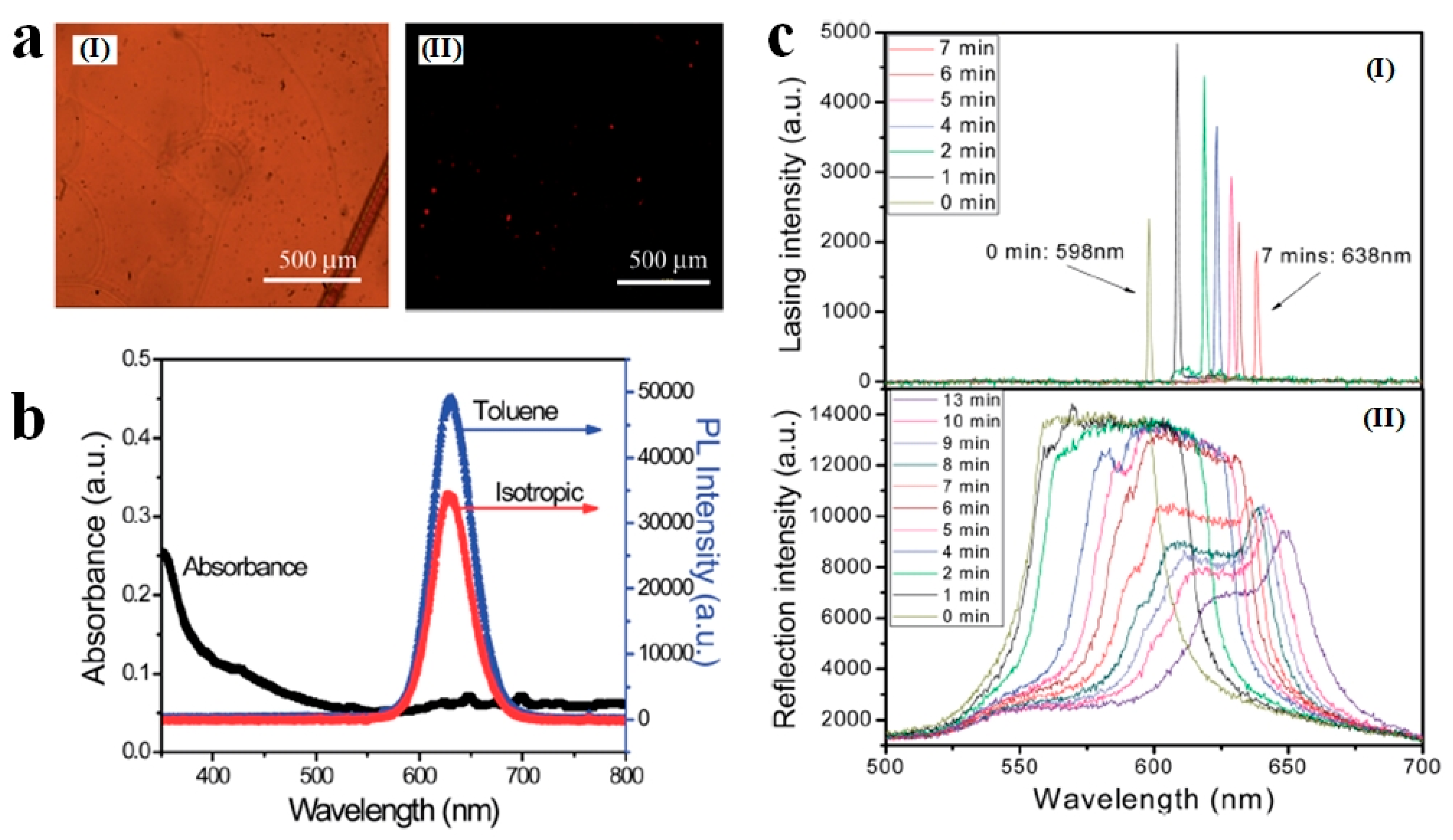 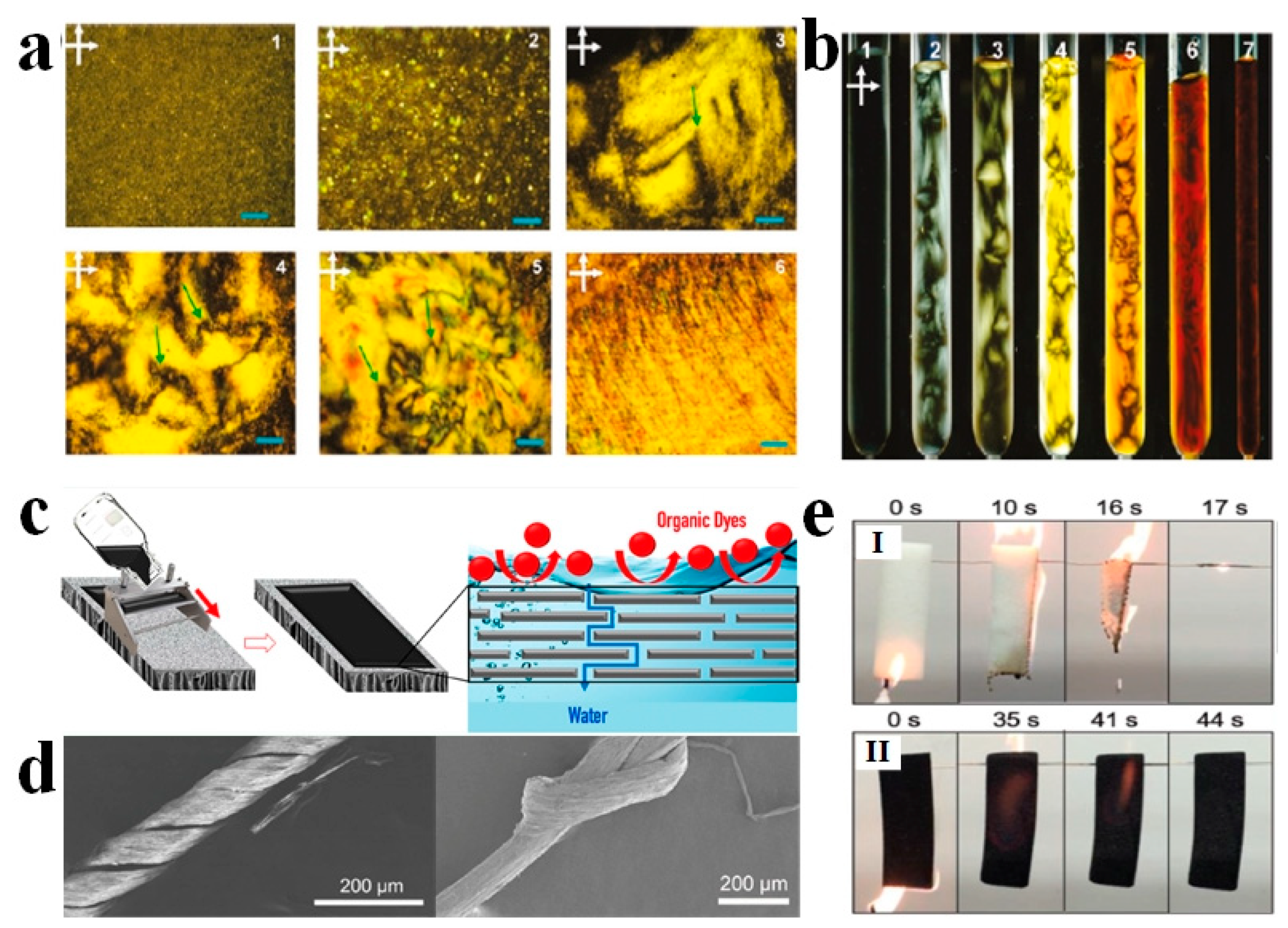 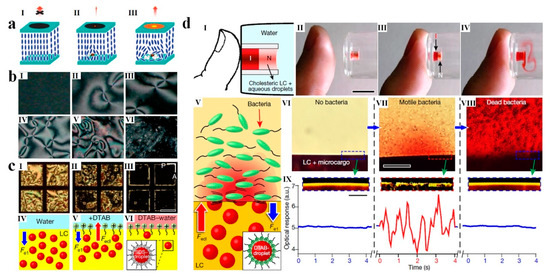 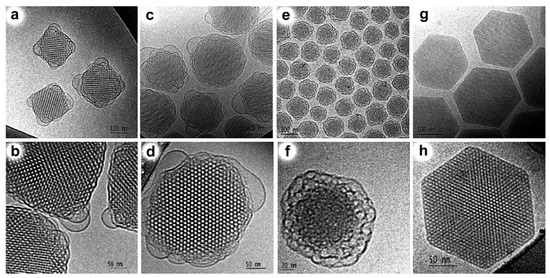 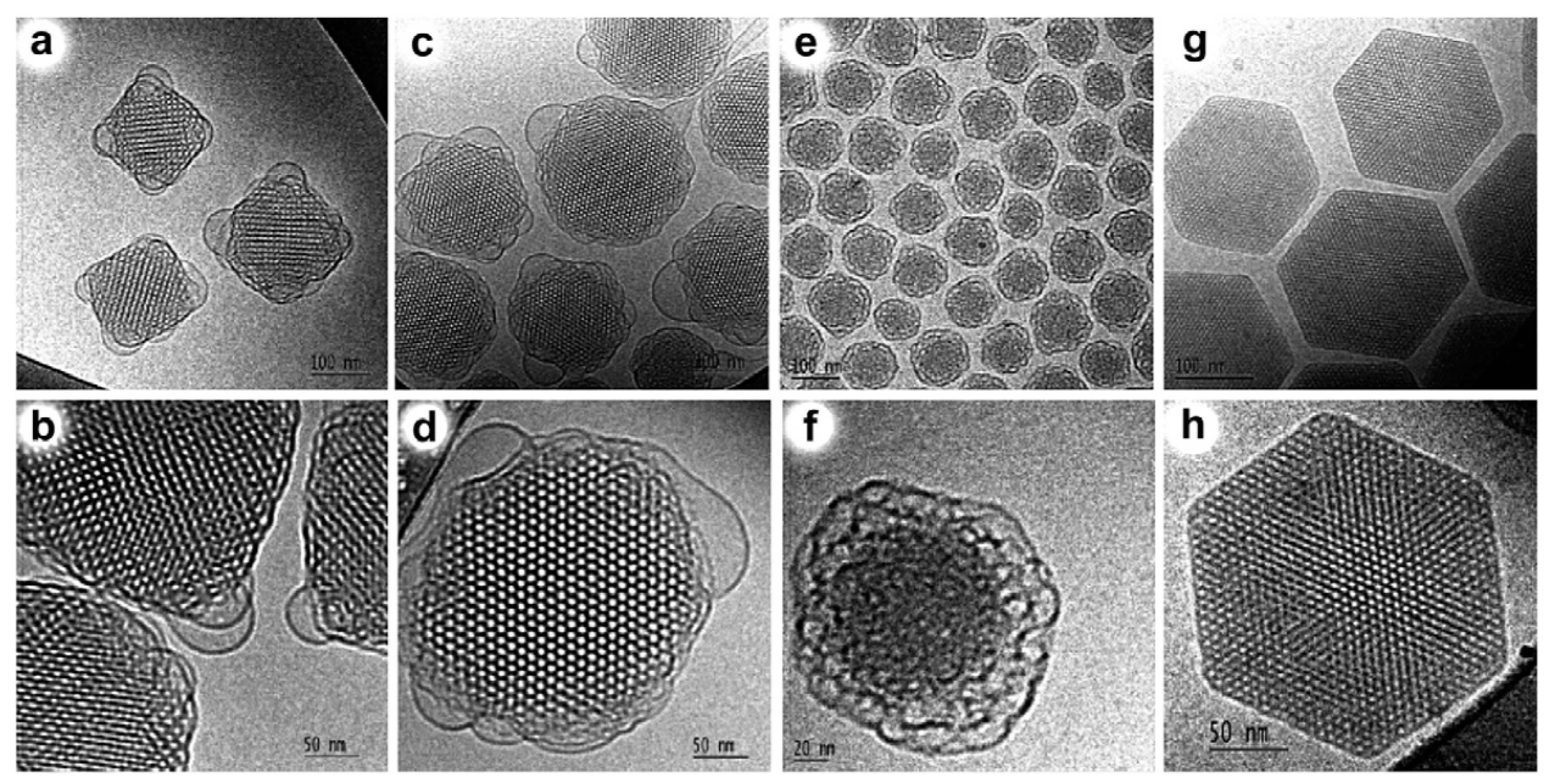