On the Properties of WC/SiC Multilayers

Multilayers are “artificial crystals” that can be designed and optimized for specific X-ray optical applications. They are often used when reflectivity, bandwidth, operating angle or some other property has to be optimized beyond the range afforded by natural crystal optics. X-rays interact very weakly with materials, so the scattering efficiency of most structures is very low except under specific circumstances such as those giving rise to constructive interference. This is the case for multilayer films with a period d comparable to the wavelength, λ, of X-rays scattering by an angle 2θ that satisfies Bragg’s condition of λ = 2d sin θ.
Advances in thin film technology including interface engineering, novel materials and material combinations enabled the manufacture of high quality multilayer structures for X-ray applications [1]. In this paper, we explore the properties of the tungsten carbide/silicon carbide (WC/SiC) multilayer system, which has remarkably low interfacial roughness and can form nanometer or even sub-nanometer period multilayers [2,3]. Originally this material pair was investigated as a potential coating for hard X-ray telescopes, which require ultra-thin periods. Here we are particularly interested in other applications such as multilayer-based gratings and multilayer Laue lenses (MLLs) [4].
A MLL [5] is a zone plate or a variable-period transmission grating that diffracts X-rays to a common focus. The resolution of the lens, which is inversely proportional to its numerical aperture (NA), is proportional to the smallest zone width. Hence, multilayers that can form sharp and smooth interfaces at nanometer and sub-nanometer layer thicknesses are of high interest for these novel optics. A MLL is prepared by sputtering a multilayer on a flat substrate, which is then sliced in a direction perpendicular to the layers to create a block of a desired depth, and which is typically several microns thick for hard X-ray lenses. The multilayer periods follow the Fresnel zone plate law [6]:
rn = (nλf + n2λ2/4)1/2,
where n is an integer, λ is the wavelength and f is the focal length and whereby the bi-layer spacing varies inversely with the square root of the layer number. To take advantage of smooth Si wafer substrates (surface roughness of 0.1–0.2 nm) the MLL deposition starts with the thinnest and ends with the thickest period. Unlike a zone plate, a MLL focuses X-rays only in one direction so two MLLs with slightly different focal lengths are needed to produce a focused spot, analogous to two crossed cylindrical lenses. Usually these two MLLs are produced from multilayers made in two separate deposition runs. The depositions can take several days or even longer to prepare multilayers with a total thickness exceeding 100 μm. This requires extreme stability and reproducibility of the sputter deposition process. Of course, due to sputter target consumption, the sputter rate changes over time, which has to be taken into account as well.
Since MLLs consist of layers spanning over a wide range of thicknesses it is of interest to know how the material properties of WC and SiC change as a function of layer thickness. For example, an abrupt amorphous-to-crystalline transition first observed in Mo layers at 2 nm [7] was also noticed in W layers [8]. This transition caused a phase error [9] in a high numerical aperture wedged MLL [10] fabricated from a W/SiC multilayer. It has been shown that presence of carbon delays this transition. For example, in Mo, where this transition occurs at 2.0 nm, it is shifted to 2.6 nm when Mo is in the vicinity of carbon such as in Mo/B4C/Si multilayers [11]. Replacing pure metal with its carbide is another way to prevent nucleation of crystals. In the aforementioned case we replaced W with WC. The new WC/SiC multilayer had no crystalline layers in the whole range of layer thicknesses (3.86 to 21.70 nm) used in these MLLs [8]. A pair of MLLs prepared from these materials was used to demonstrate imaging at 16.3 keV with sub-10 nm focused beam with over 60% diffraction efficiency [8]. In general, high-NA MLLs consist of many thousands of bilayers. For example, the two aforementioned MLLs consist of 5100 and 3326 bilayers. The high NA and high efficiency make such MLLs ideally suited for focusing highly coherent X-ray beams from synchrotrons or X-ray Free Electron Lasers (XFELs). Based on our experience with intense synchrotron beams WC/SiC-based MLLs maintain performance over long periods of time. However, under XFELs beam these lenses would be subjected to more extreme X-ray intensities and potentially damaging conditions. Hence, knowledge of the thermal stability of these MLLs is required to help select materials and design lenses to be used at such sources.
Typically, only materials with low atomic number (Z), low density, high melting point and high thermal stability are considered for XFEL optical coatings and elements. For example, diamond-based Fresnel zone plates were used to successfully focus a hard X-ray FEL beam [12]. However, in XFEL experiments, where the damage of single films [13] and multilayers [14] consisting of high Z elements were studied, higher than expected damage thresholds in grazing incidence geometries were observed. Thus, it may be possible to use MLLs consisting of WC/SiC multilayers with XFEL beams. To the best of our knowledge no thermal stability data were reported for WC/SiC multilayers, and W/SiC systems were only explored at a temperature range below 300 °C [15]. Here we report on WC/SiC and W/SiC multilayers, in particular the study of their properties (interface roughness, microstructure, chemical composition, stoichiometry and stress) as a function of multilayer period. Their stability as a function of temperature and annealing time is investigated as well.

All samples used in this study were prepared in our lab using a magnetron sputtering system with four 7.6 cm diameter magnetrons. W/SiC and WC/SiC multilayers were deposited on super-polished Si wafers using ultra-high purity Kr (99.999%) gas at 0.2 Pa. Depositions were performed at constant powers of 100 W (W target), 100 W (WC target) and 220 W (SiC target). Substrates, which were mounted on a platter, spun at 100 rpm during the deposition. Layer thickness and uniformity was achieved by controlling the platter velocity. Several multilayers of both material pairs (W/SiC and WC/SiC) with different periods ranging from 3.8 nm to 28 nm were prepared and then stored in a dry N2 environment (Table 1).
Thermal annealing was performed in a cold wall, high-temperature vacuum (10−7 Pa) furnace with programmed heating and cooling cycles (HSD Engineering Inc., Oakland, CA, USA). Samples were annealed at temperatures from 100 °C to 900 °C. A heating rate of 6.7 °C/min was used to reach the targeted temperature which was controlled within ±2 °C. The listed annealing times refer to the time at the final temperature and do not include the heating and cooling cycle. However, the measurements with different experimental techniques listed below were preformed after each listed annealing temperature cycle, at room temperature. The system was cooled down without any active cooling system until it reached 50 °C at which point the furnace was vented with dry N2.
Small Angle X-Ray Diffraction (SAXRD) and High Angle X-Ray Diffraction (HAXRD) measurements were performed with X’Pert PRO MRD (Panalytical, The Netherlands) equipped with a PIXcel detector, a high-resolution goniometer and a Ge (220) asymmetric four-crystal incidence beam monochromator tuned to Cu Kα radiation (0.15418 nm). SAXRD scans between 0.1°–7° were collected with 0.002° steps. We used the IMD [16] software package to fit the data. HAXRD scans between 30°–80° (90°) were collected to monitor changes in the microstructure of the multilayers.
A Multiple Beam Optical Sensor Ultra-Scan stress system (k-Space Associates, Inc., Dexter, MI, USA) was used to monitor changes in the curvature of the samples before and after each annealing cycle. A two-dimensional (2D) curvature of the sample was mapped with a laser array and subtracted from the sample’s initial curvature. Changes in the beam spacing are related to the stress-induced curvature via Stoney’s equation [17] in which stress is normalized to the multilayer’s total thickness.
Atomic Force Microscopy (AFM) images were obtained on bare Si substrates, and multilayer-coated W/SiC and WC/SiC samples (before and after annealing) with a Dimension Icon (Bruker, Karlsruhe, Germany) microscope. This AFM is equipped with an acoustic hood and vibration isolation table with noise floor of less than 0.03 nm RMS. The probe tips (Si doped with Sb) had a tip radius of 8 nm and a resonance frequency of 75 kHz. Atomic force micrographs across 1 μm × 1 μm areas (512 × 512 pixels) were collected in a tapping mode at a 1 Hz scan rate and processed using the Bruker NanoScope Analysis software. These measurements give multilayers’ surface high spatial frequency roughness, which is referred as “Roughness” in the tables below.
Rutherford Backscattering (RBS) analysis (Evans Analytical Group, San Diego, CA, USA) was used to obtain quantitative depth profiles of Si, C and W, and the stoichiometry of SiC and WC layers. Due to the limited depth resolution of the RBS method, samples had to consist of much thicker SiC and WC layers than used in multilayers listed in Table 1. Consequently, samples for RBS analysis consisted of only one pair of SiC and WC layers, each 40 nm thick. After deposition the sample was cut in half. One half was annealed at 700 °C for 24 h while the other was kept as a control. Both samples were exposed to 2.275 MeV He++ ion beam at normal incidence angle and RBS spectra were collected with a normal angle detector at 160° and a grazing (movable) detector at ~100°.
Samples for Transmission Electron Microscopy (TEM) were prepared using in situ FIB lift-out technique on an FEI Dual Beam FIB/SEM (Evans Analytical Group, San Diego, CA, USA). TEM images were obtained with an FEI Tecnai TF-20 FEG/TEM operated at 200 kV in bright-field (BF), dark-field (DF) and high-resolution (HR) TEM mode.

Layers of W and Si create structures of very high contrast in electron density, making them attractive for applications at photon energies above 10 keV. Previous studies showed that replacing tungsten with tungsten carbide and silicon with silicon carbide further improves the quality of layer interfaces, which in turn allows for fabrication of ultra-short period multilayer coatings pushing the operative working range to photon energies higher than 200 keV [2,3,15]. Building on this previous knowledge the WC/SiC multilayer pair was successfully used to prepare the highest numerical aperture and highest efficiency multilayer Laue lenses so far [8], which enabled focusing of 16.3 keV X-rays to a sub-10 nm beam spot and demonstrated potential for fast imaging.
In order to assess their thermal stability and potential use with intense XFEL beams we carried out a study on multilayer structures of different periods. Thermal annealing usually leads to inter-diffusion and compound formation at interfaces. In WC/SiC multilayers, both layers are already deposited as compounds and based on the results presented here the multilayers are very stable in period and interface roughness up to 700 °C. However, stress changes are observed at temperatures of 100 °C and higher. Thus, for applications using high X-ray intensities that would cause the temperature of the structure to exceed 100 °C, one could “cure” the multilayer at high temperature to make it stable in stress as well. Above 700 °C substantial changes in interface roughness and/or interface width of WC/SiC multilayers start taking place. These cause a decrease in the intensity of the Bragg peaks and a change in the Bragg peak ratios that could be explained by a redistribution of carbon and a change in the density of the WC and SiC layers. MLLs based on WC/SiC can be considered extremely stable under synchrotron beams. The use of such MLLs to focus XFEL beams remains an open question that calls for further experimental study.

We greatly appreciate technical assistance from Sabrina Bolmer and Sven Korseck. Funding for this project was provided by the Helmholtz Association through program-oriented funds. 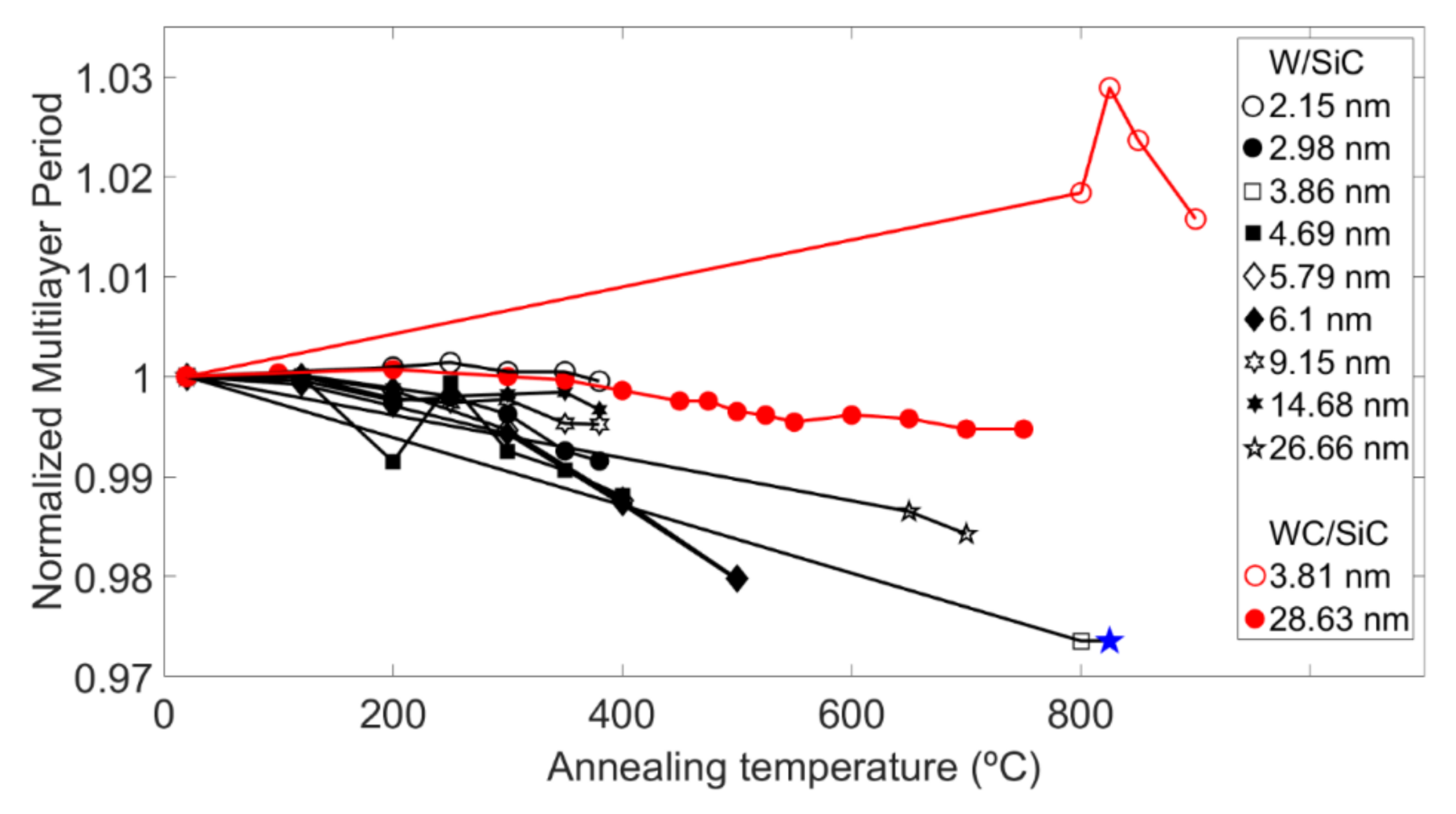 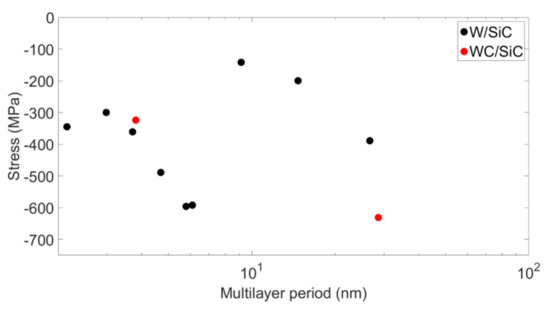 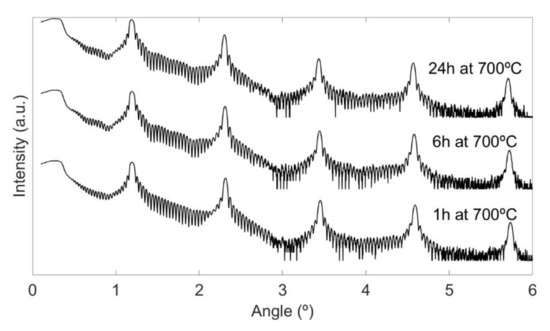 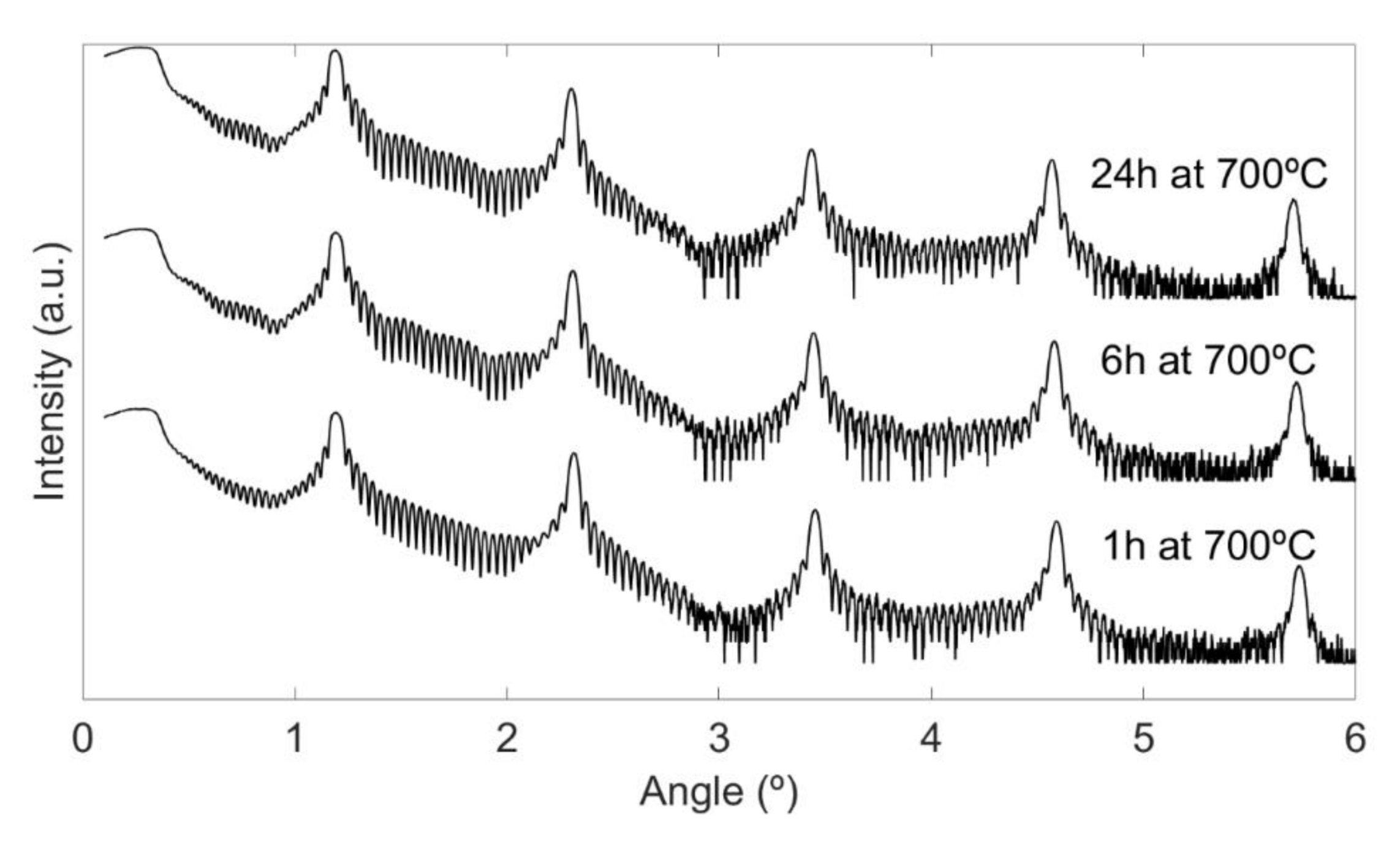 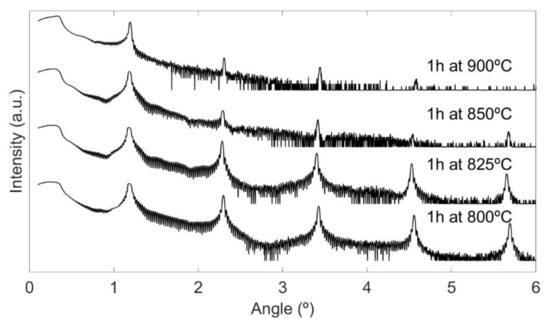 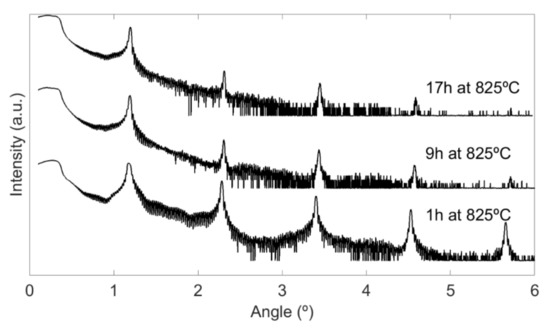 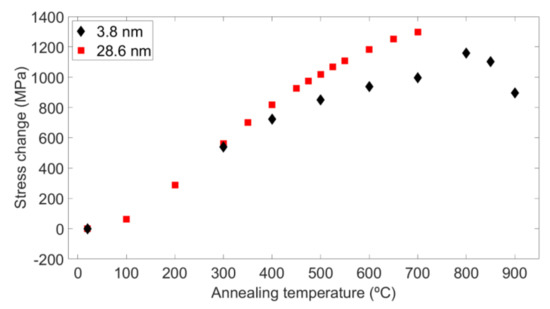 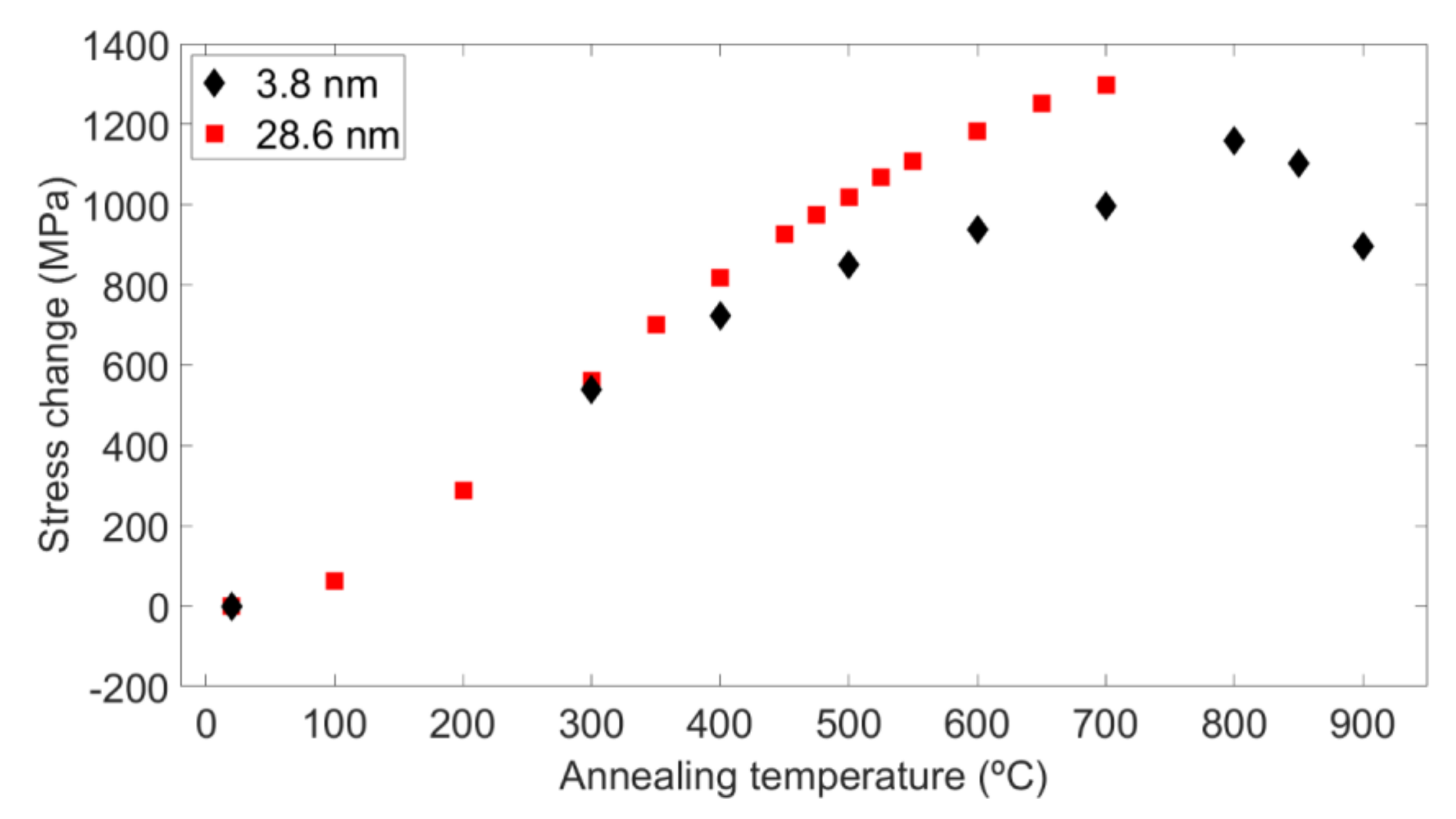 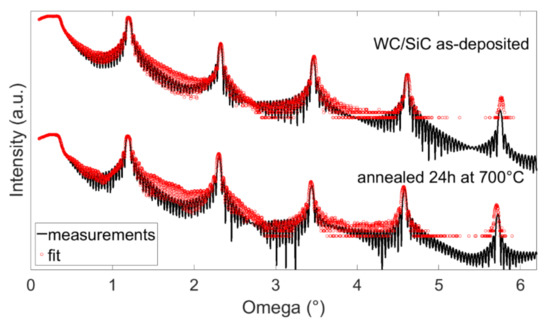 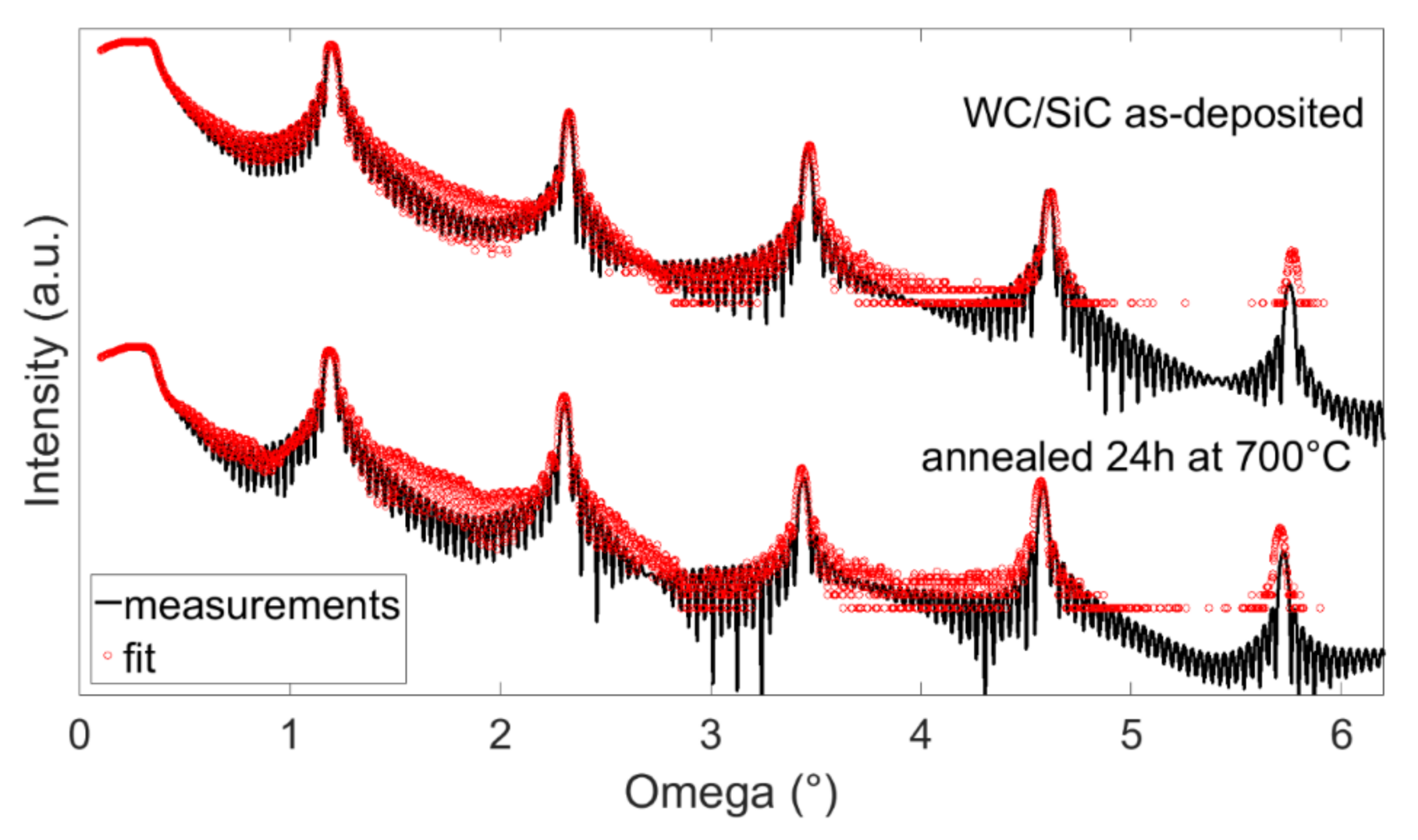 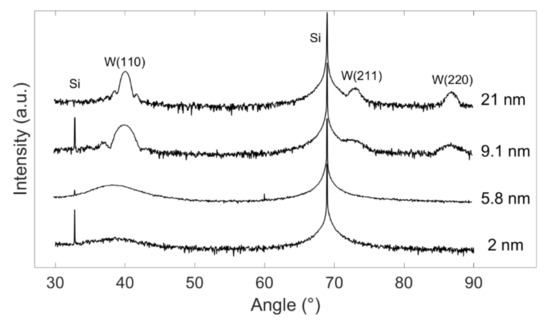 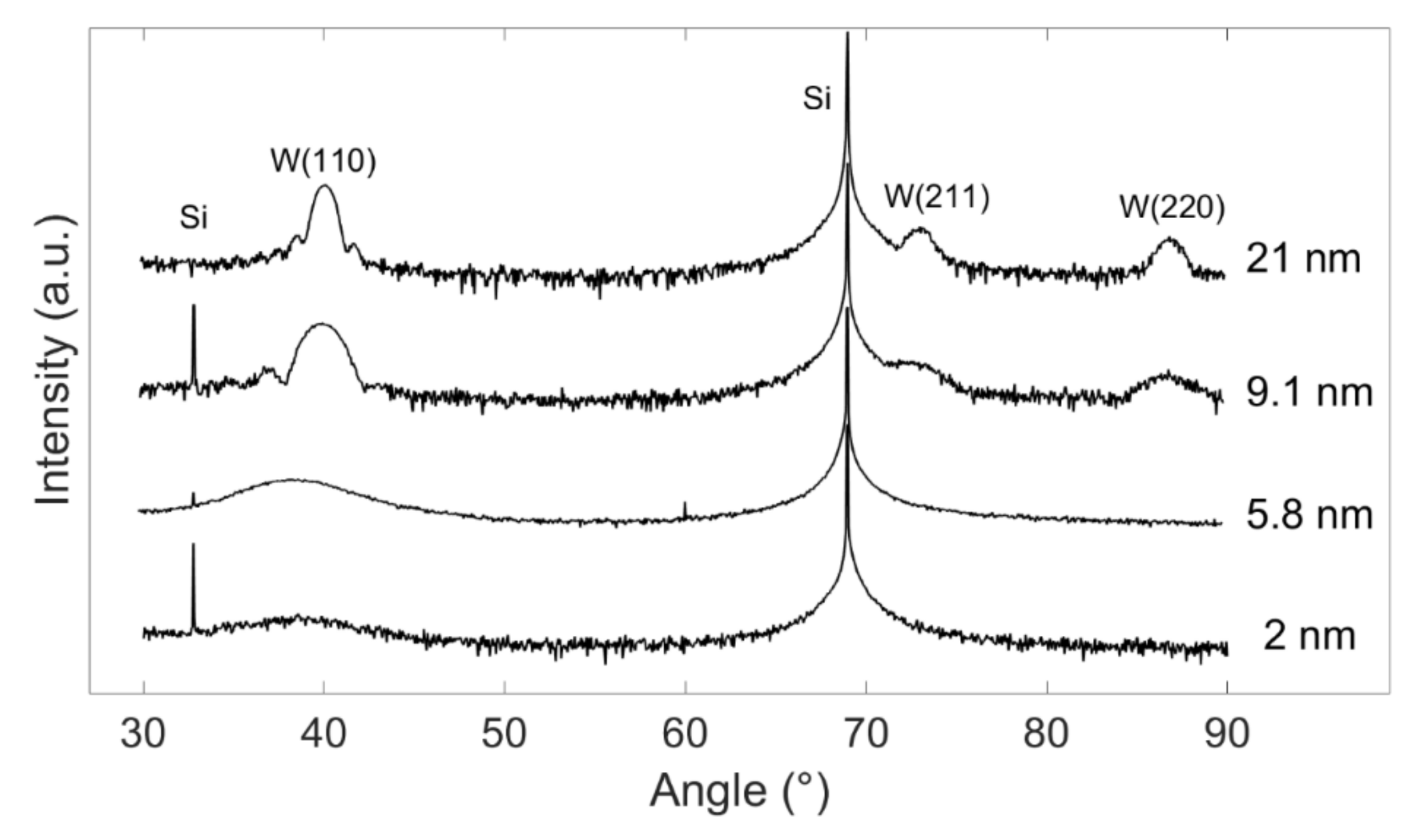 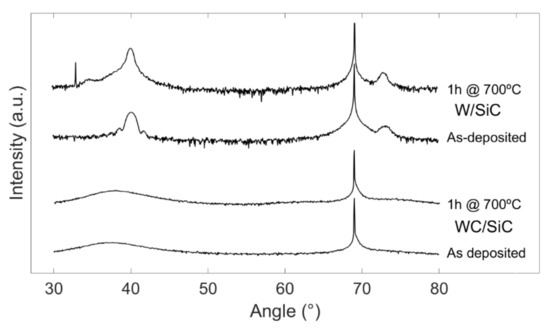 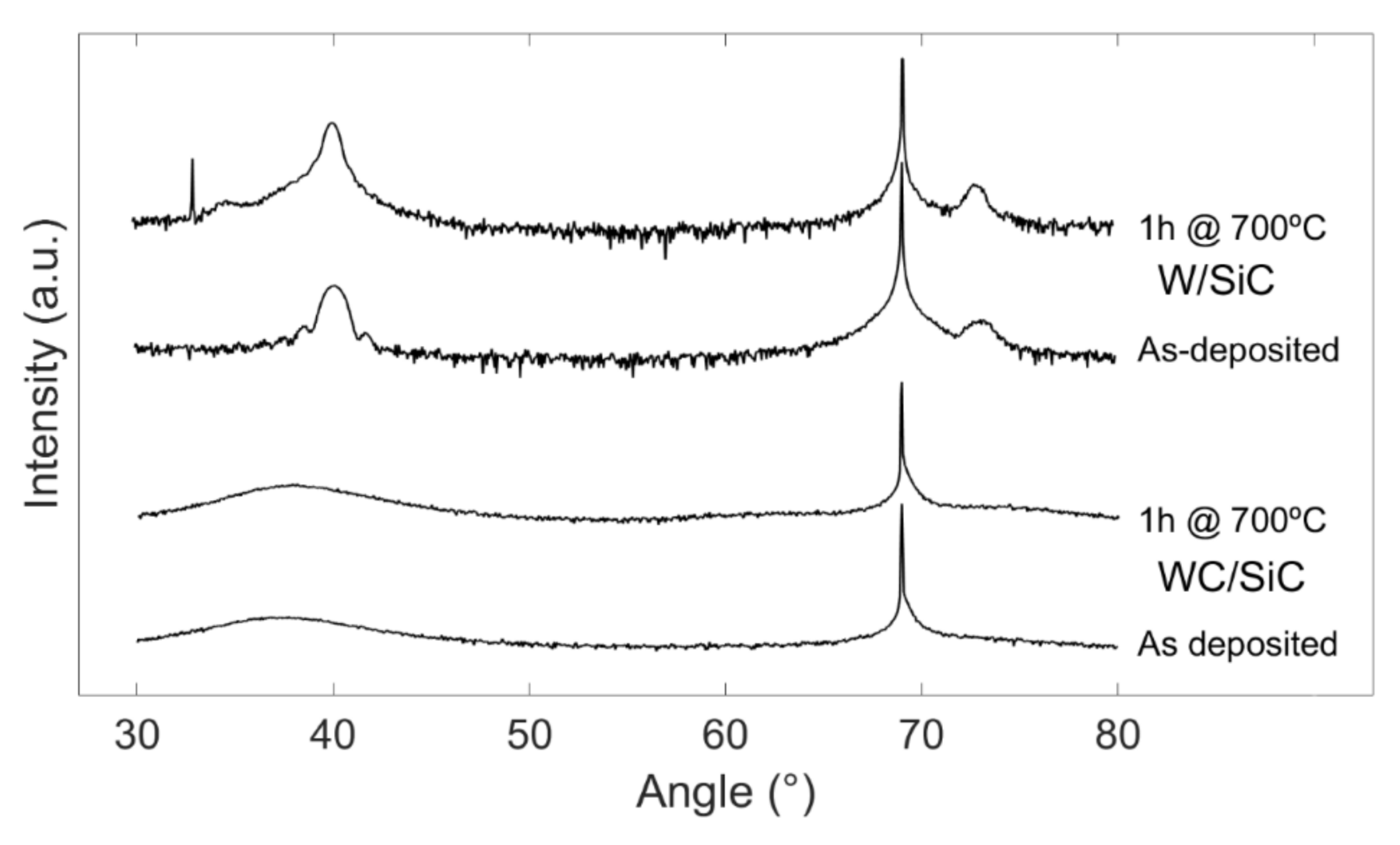 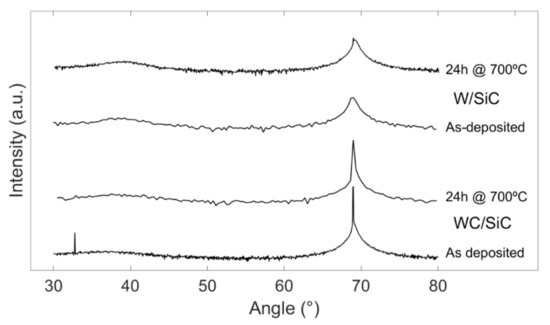 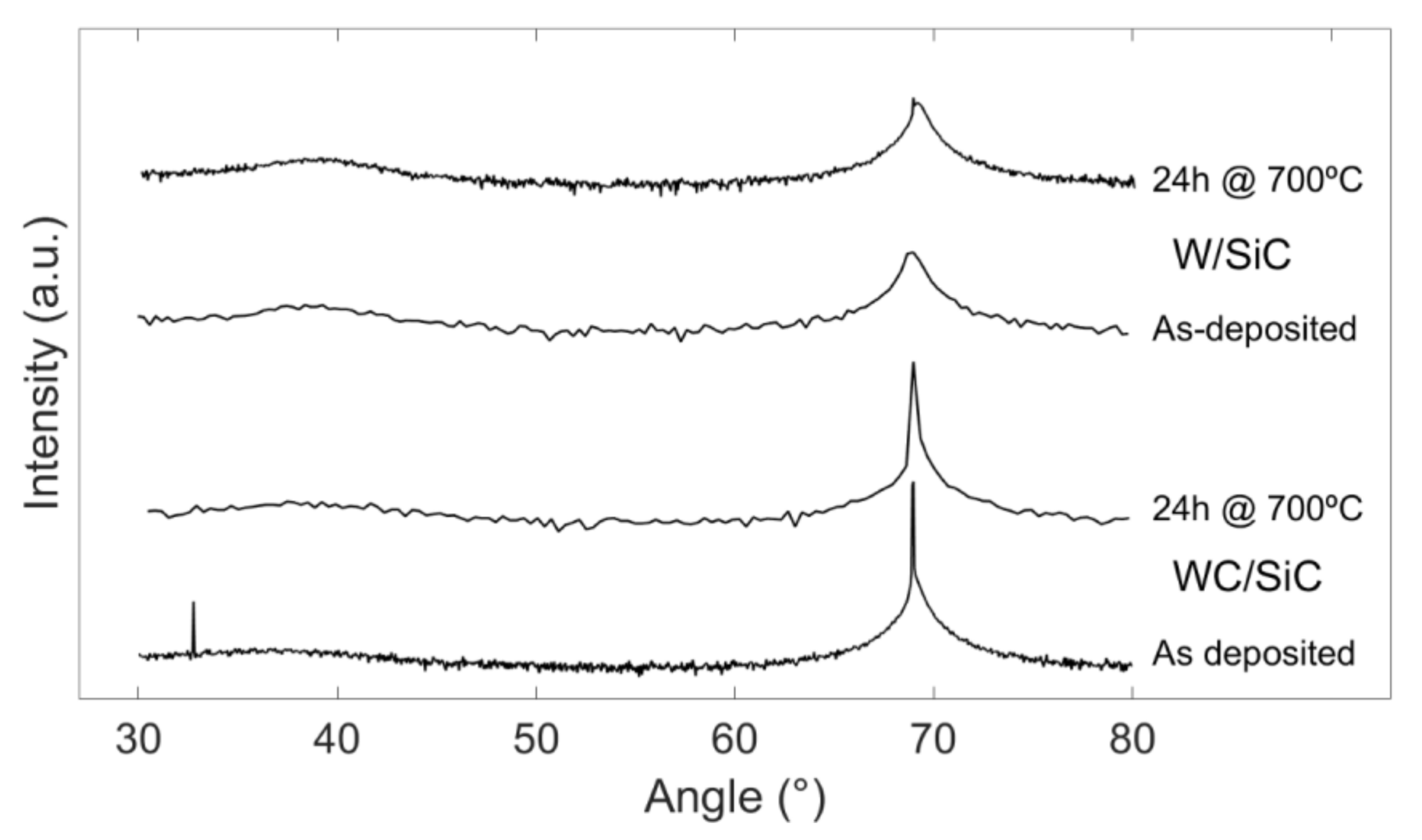 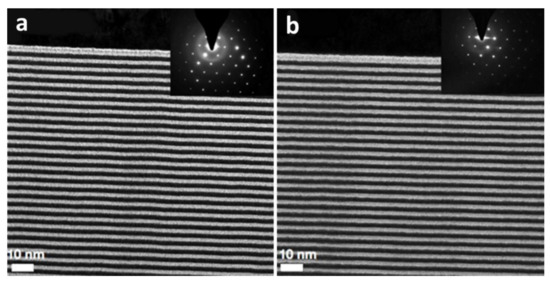 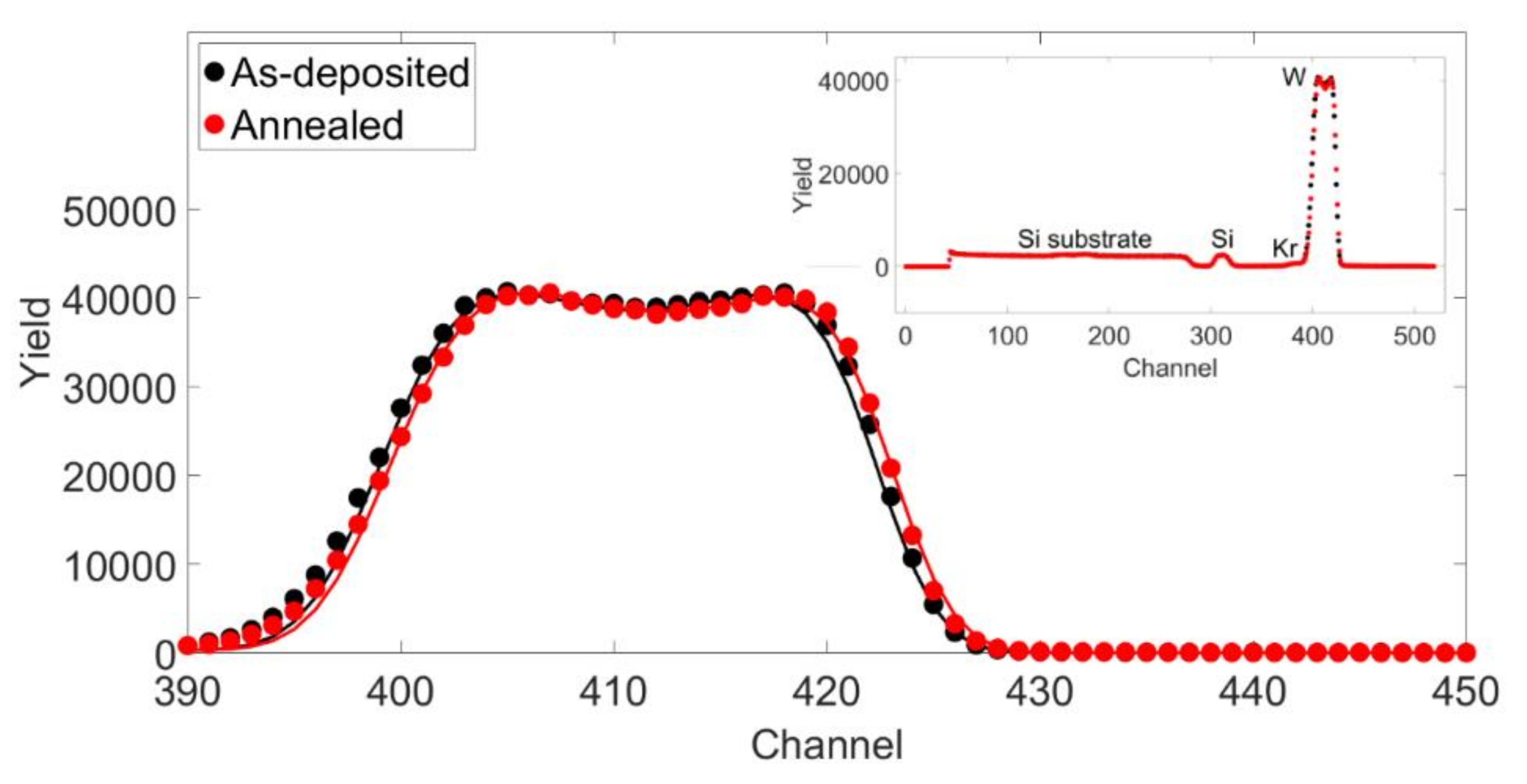