This paper introduces a tunable metamaterial absorber (MA) based on polymer network liquid crystal (PNLC) in the terahertz (THz) frequency band. Under the optimal polymerization condition, through electrical control of the orientation of the PNLC embedded in the frequency selective surface, the resonant frequency of the absorber can be tuned from 416.5 to 405.0 GHz, corresponding to fractional frequency bandwidth of 2.8%. The experimental results show that the proposed MA based on the PNLC offers an adjustment time of 10 ms and recovery time of 85 ms, which is significantly faster than the tunable metamaterial devices based on conventional nematic liquid crystal (LC).
Keywords: polymer network; absorber; liquid crystal; response time; terahertz polymer network; absorber; liquid crystal; response time; terahertz

Over the past few years, realization of telecommunication, imaging, sensing, and biomedical instruments and devices in the THz regime of the electromagnetic spectrum have attracted a great deal of research attention. This is due to the prominent potential of the THz frequency regime in the realization of highly efficient and ultra-broadband wireless communication systems [1,2,3]. A variety of THz devices have been recently emerged, in which the THz absorbers exert an important role in the THz systems, including the sensors, detectors and imaging instruments [4,5].
Metamaterials are widely known due to their unique physical properties not readily observed in natural materials [6]. They are artificially composited to affect the energy of the electromagnetic radiation to achieve abnormal properties such as negative permittivity and negative permeability [7,8]. Ever since Landy et al. presented the design for an absorbing metamaterial with near unity absorbance in 2008 [9], the metamaterial absorbers (MAs) have attracted an extensive research attention. Afterwards, various MAs were designed to fulfill different demands. Zhu et al. demonstrated an ultra-broadband, polarization-insensitive, and wide-angle MA for THz regime [10]. Shen et al. fabricated a MA that had three distinctive absorption peaks at 0.5, 1.03, and 1.71 THz with absorption rates of 96.4%, 96.3%, and 96.7%, respectively [11]. However, most of them could only operate at a single frequency or in a limited range of frequencies. To overcome this issue, the tunable absorbers were presented by researchers [12,13]. Shrekenhamer et al. put forward the electronically-tunable MA by incorporation of LC into strategic locations within the metamaterial unit cell [14]. Then, various tunable MAs based on LC, such as single-band MA [6], triple-band MA [15], and polarization-dependent MA [16], have been reported.
LC, as a tunable material, is generally known that the rotation of the nematic LC embedded in the absorber can be guided by the bias voltage, resulting in the shift of the resonant frequency [17]. However, the response time of the LC-based devices is quite slow, which hinders their potential applications. The response time of the nematic LC depends on several factors, such as the cell gap, viscoelastic coefficient, and applied voltage [18]. The rotation time can be greatly cut down by applying a large bias voltage. However, the recovery time after removing the bias voltage may be diminished by the larger restoring elastic torque. Then, the free recovery time may be reduced by introducing the polymer network liquid crystal (PNLC) [19].
In this paper, we present a tunable MA based on the PNLC in terahertz band. Compared to the previously reported LC-based Mas, the metal ground plane is replaced by a transparent indium-tin-oxide (ITO) film so that the UV light can be transmitted through the ground electrode plate to polymerize the internal network. The experimental results show that the PNLC-based MA not only provides wideband tunability but also greatly accelerates the response time.

The design of the MA begins with the frequency selective surface (FSS), which is a two-dimensional periodic metal patch array on the dielectric surface and exhibits obvious band-pass or band-stop filtering characteristics when interacting with electromagnetic waves. The common basic units of FSS are dipoles, crosses, square rings, etc. In this paper, the circular patch array is adopted and fabricated by lithography and etching. Figure 1 shows the fabricated patch array.
The PNLC (also known as anisotropic LC gel) has been extensively studied in the field of electrically tuned scattering devices [20]. In this paper, the mass ratio of 95% LC host SLC103014-200 (S200) (Shi jiazhuang Chenzhi Yonghua Display Material Co., Ltd., Shi jiazhuang, China) is first mixed with a mass ratio of 5% photoreactive difunctional monomer RM257 (Jiangsu Hecheng Advanced Materials Co., Ltd., Nanjing, China) and a small amount of photoinitiator Benzoin Methyl Ether (TOKYO CHEMICAL INDUSTRY CO., LTD., Tokyo, Japan). Then, the photopolymerization precursor is filled into the LC cell. After this, a UV curing process is performed to induce the crosslinking of the polymer network [21]. Figure 2 sketches a schematic diagram of the PNLC manufacturing process.
Figure 3 presents the structure of the PNLC-based MA. This device is composed of a patterned copper layer (FSS) and an ITO layer spaced apart by PNLC. The top copper layer is geometrically patterned in order to strongly couple to a uniform incident electric field and serves as a top electrode. By pairing the top layer with an ITO plane, it serves not only as a bottom electrode but also as a metal ground. Besides, the inner surfaces of the copper layer and the ITO layer are coated by the polyimide (PI) alignment layers to leave the orientation of the LC molecules parallel to the surface of the electrode without the bias voltage. When the driving voltage is applied, the alignment of the liquid crystal molecules is parallel to the excitation electric field.
The resonant structure may be considered as a circular patch, with high aspect ratios. According to the antenna theory, the resonant mode within the structure is a cavity mode [22]. The orientation of the LC molecules may be redirected by an external electrical field excited by a bias voltage between the top metal pattern layer and the ITO ground. As a result, the permittivity of the LC layer continuously varies with the change of the bias voltage. Specially, when the LC molecules turn to the direction perpendicular to the surface of the electrode, permittivity reaches its peak value with the saturation state. Therefore, the LC permittivity may be electronically controlled between these two states. The resonant frequency of a MA depends on the dielectric permittivity of the LC layer so that it may be shifted by changing the bias voltage.

A tunable MA based on the polymer network liquid crystal is presented in this paper. Compared with the conventional tunable nematic LC-based absorbers, the PNLC-based absorber offers a faster response speed. In addition, by increasing the exposure time of the PNLC, the response time may be further reduced until the photopolymerization precursor is completely reacted. The proposed structure is expected to find many applications in tunable THz devices such as fast-response phase shifters and sensors.

This research was funded by National Natural Science Foundation of China (Grant No. 61871171, 51607050) and Chongqing Research Program of Basic Research and Frontier Technology (Grant No. cstc2018jcyjAX0291). 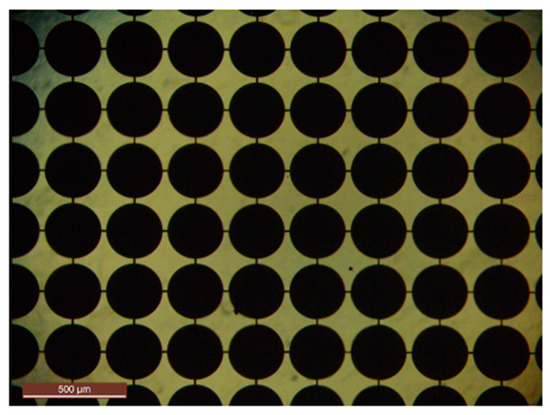 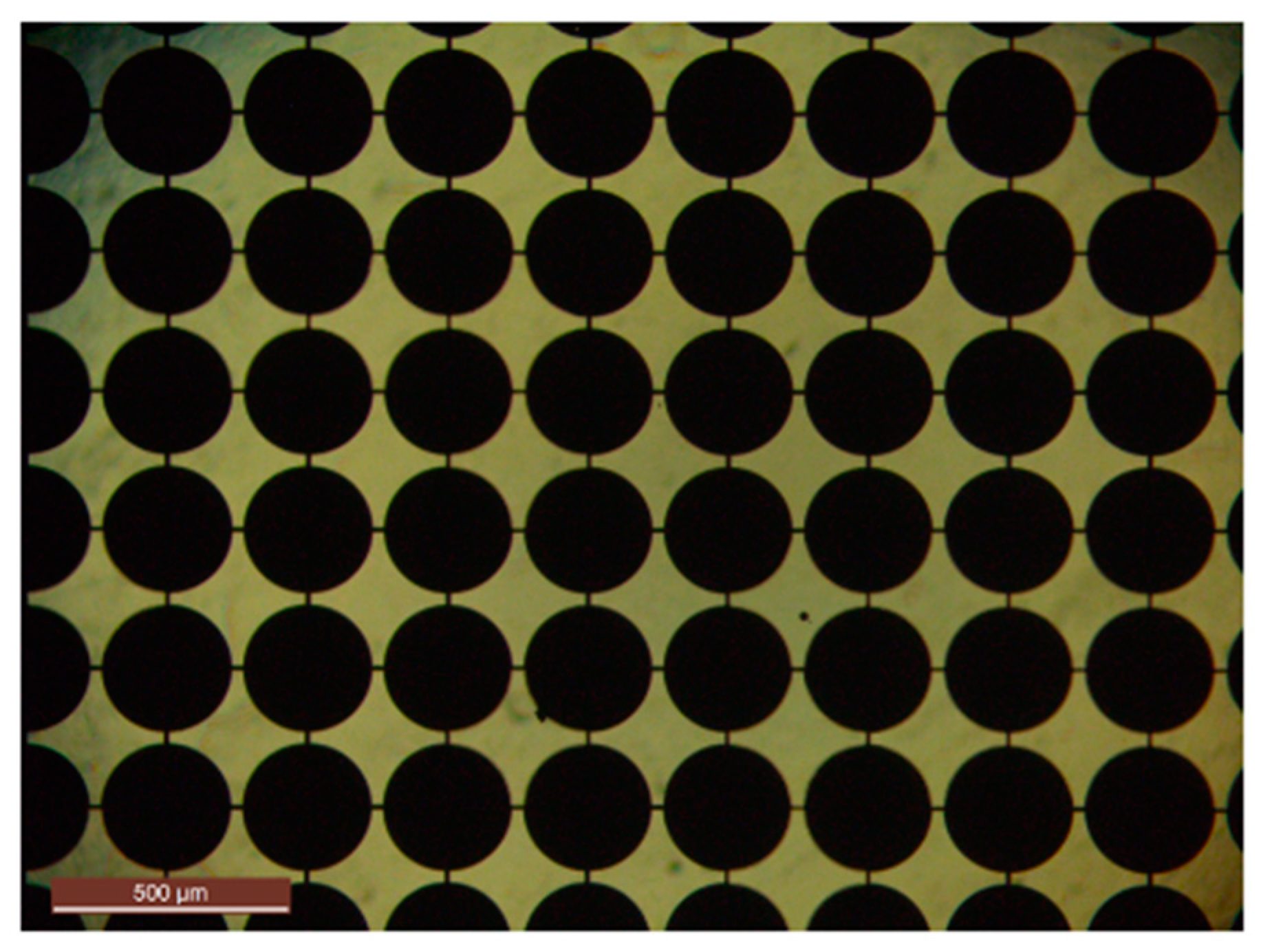 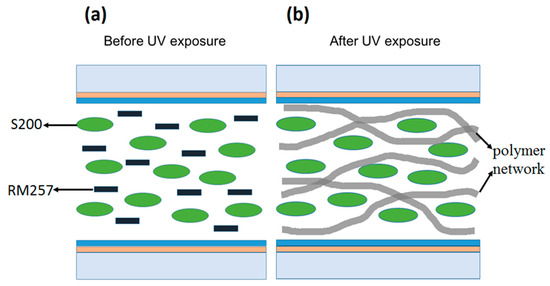 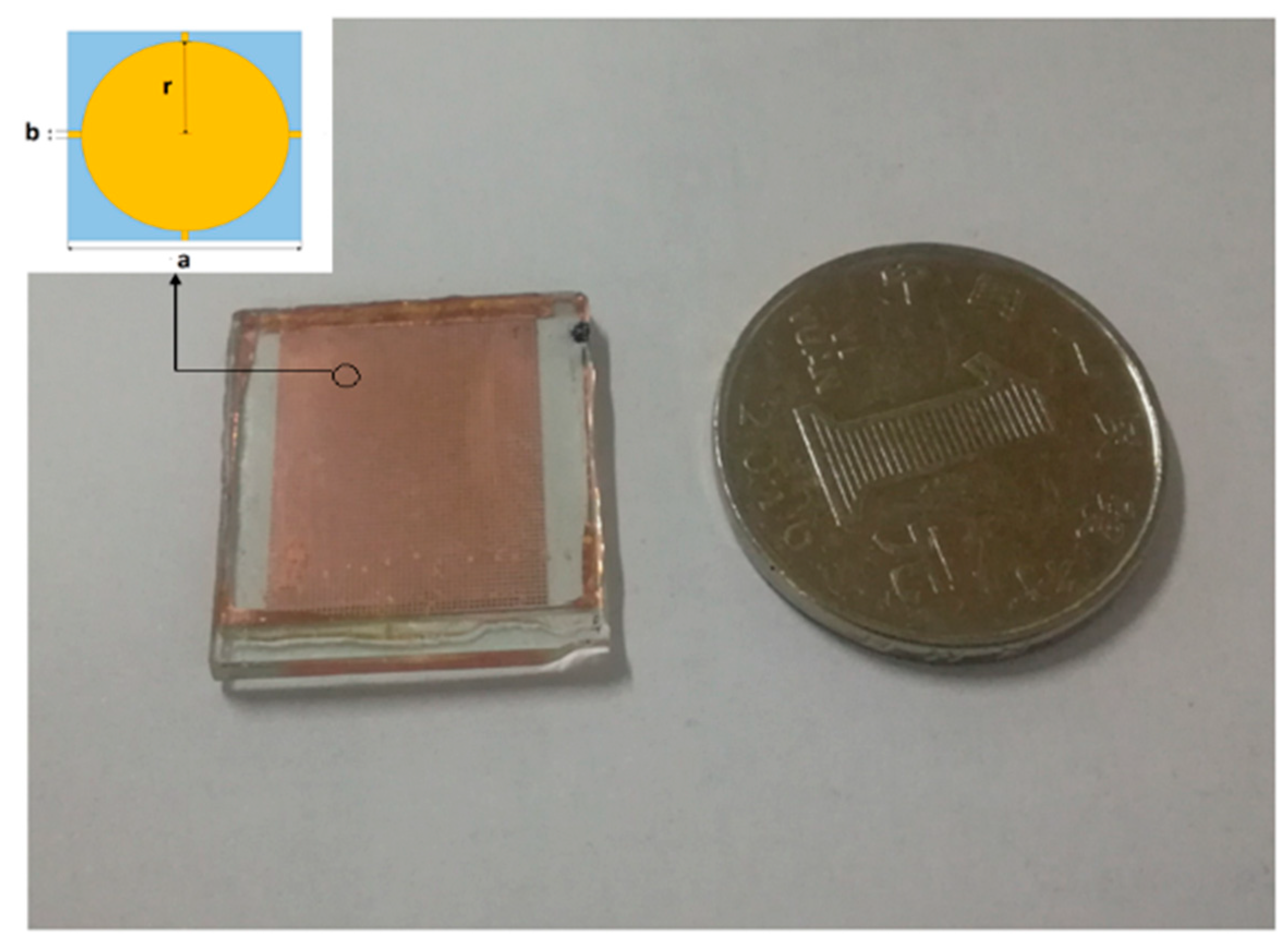 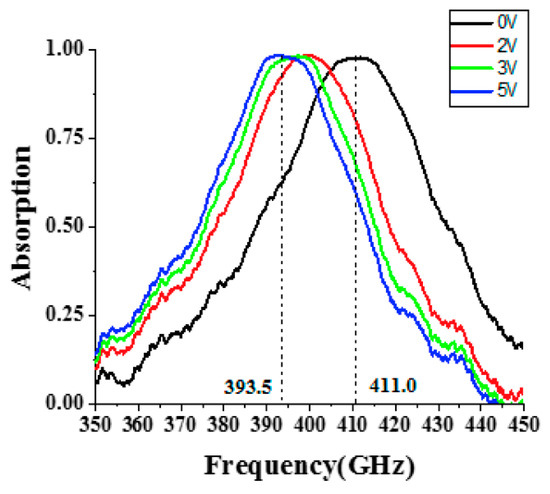 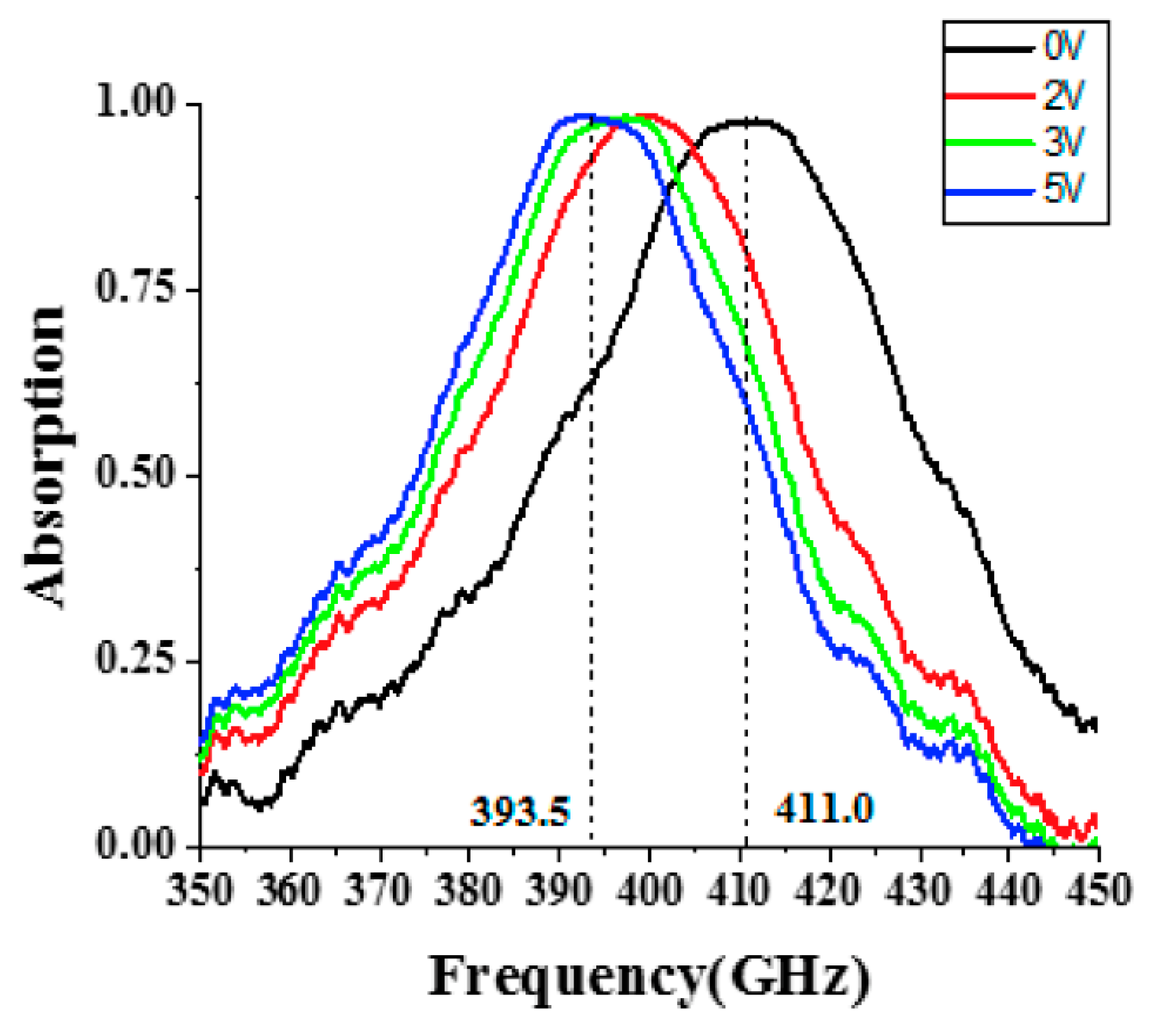 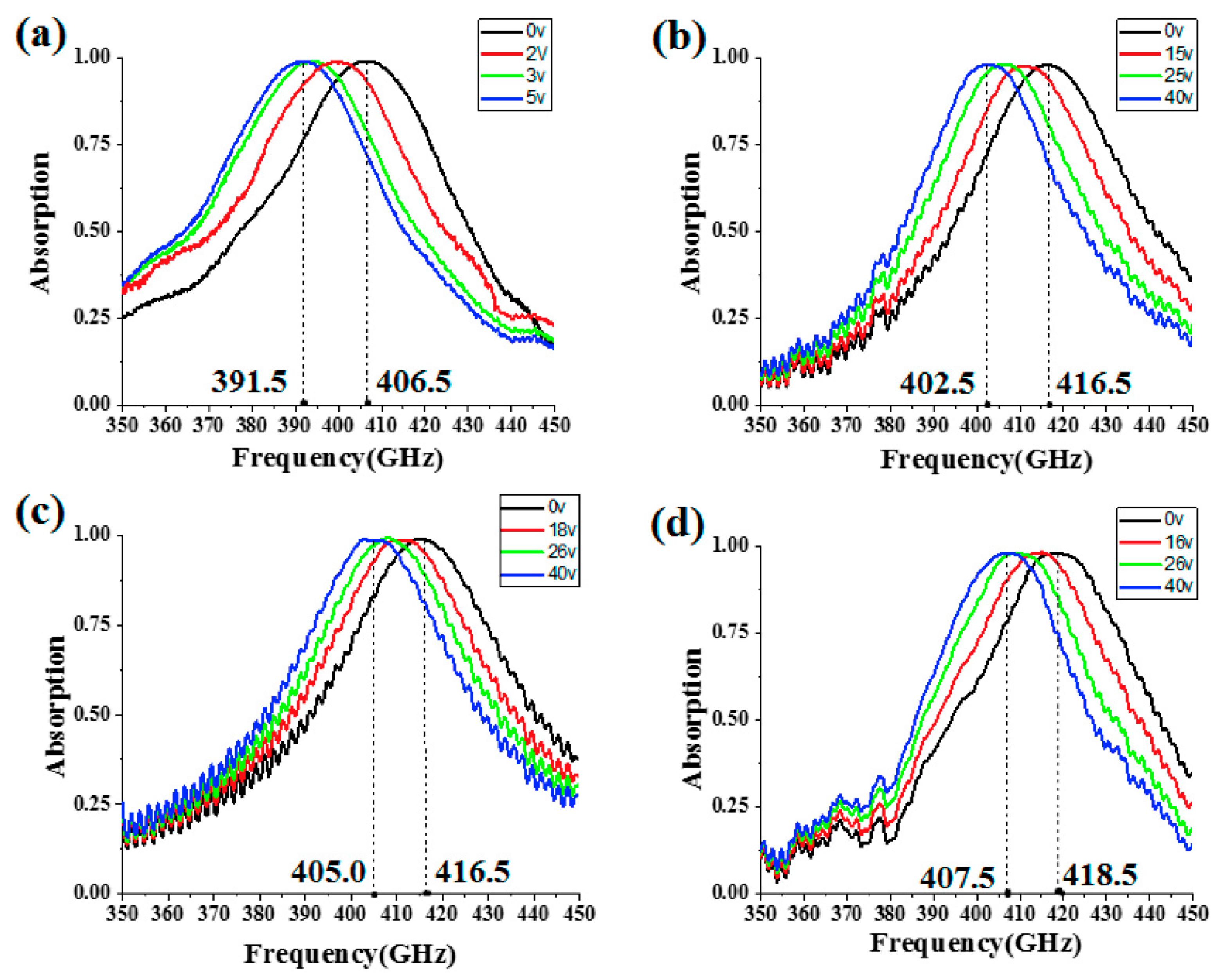 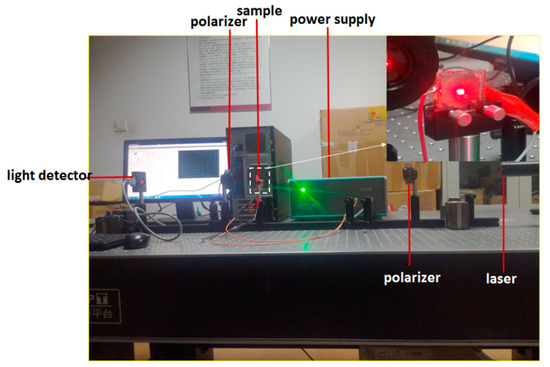 Table 1. Results of measured response time of MAs.
Table 1. Results of measured response time of MAs.
© 2018 by the authors. Licensee MDPI, Basel, Switzerland. This article is an open access article distributed under the terms and conditions of the Creative Commons Attribution (CC BY) license (http://creativecommons.org/licenses/by/4.0/).
We use cookies on our website to ensure you get the best experience. Read more about our cookies here.
Accept
We have just recently launched a new version of our website. Help us to further improve by taking part in this short 5 minute survey here. here.
Never show this again