In this paper, we propose a tunable dielectric metamaterial absorber in the terahertz (THz) range. The absorber is composed of a silicon pillar array embedded in a liquid crystal (LC) layer, which is sandwiched by two graphene electrodes. By way of varying the applied bias, the LC orientation can be continuously tuned. At a saturated bias, all LCs are vertically driven, and an absorption peak of 0.86 is achieved at 0.79 THz. When the bias is turned off, the same LCs are horizontally aligned, and the absorption peak degenerates into two smaller ones. A 47% modulation depth at 0.79 THz is obtained via numerical simulation with experimental feasibility considered. Such an active THz dielectric absorber may be utilized as part of various active THz apparatuses in THz imaging, sensing, switching, and filtering.
Keywords: dielectric absorber; liquid crystal; metamaterial; tunable; terahertz dielectric absorber; liquid crystal; metamaterial; tunable; terahertz

Terahertz (THz) waves, the last exploited part in the electromagnetic spectrum, have great potential in security screening [1], biological detection [2], and wireless communication [3]. Among various THz devices, an absorber that can efficiently capture wave energy is of vital importance. Metamaterial absorbers (MMAs) have drawn particular attention due to its capability of arbitrary frequency and amplitude modulation via freely designing their geometry [4]. After Tao et al. presented the first THz metallic MMA in 2008 [5], a tremendous amount of research on MMAs have been performed [6]. Integrated with functional materials including phase-change media [7], semiconductors [8], graphene [9], and liquid crystals (LCs) [10,11], MMAs exhibit tunable electromagnetic responses. The metals used in traditional metallic MMAs are often the highest electrically conductive materials in order to achieve high-Q resonance in MMAs. High electrical conductivity leads to high thermal conductivity and subsequently high ohmic loss. For applications where thermal properties are vital—e.g., THz imaging, sensing, and filtering—metal-free devices are preferred. To address this issue, Liu et al. developed a dielectric THz absorber based on hybrid dielectric waveguide resonances [12] and achieved an absorption of 97.5%. The functionality of this absorber is static. To further exploit dielectric MMAs with dynamic functions is meaningful.
LC presents excellent electro-optic tunability thanks to its broadband large birefringence and external field responsibility. Through spatially controlling the tilt or azimuthal directors of LC, the dynamic phase or geometric phase of THz wave can be freely manipulated [13,14]. However, these components all require a large LC thickness to accumulate sufficient phase retardation, leading to a slow response and high operating voltage. Recently, on the basis of the distinct influence on the resonance of metamaterials of surrounding LC refractive index change, various active THz metadevices have been demonstrated, such as active filters [15,16], polarization converters [17], and phase shifters [18]. Here, both the cell gap and the operating voltage are drastically decreased. Through precisely designing the geometry of metadevices and optimizing the matching between the refractive index change of LC and electromagnetic resonant boundary condition, a dynamic tuning with large modulation depth can be reached.
Here, we propose a tunable THz dielectric MMA, which is composed of a silicon pillar array embedded in an LC layer driven by graphene electrodes. The function of this absorber relies on the overlapping between electric and magnetic dipole resonances of the silicon pillar array. We precisely set the radius of the pillar to satisfy the boundary condition at the bias saturated state, thus it behaves as a perfect absorber. While turning off the bias, the overlapped resonances are broken due to the refractive index change of LC. As a result, the absorption peak is split and its amplitude drops to half of the original one.

In summary, we introduced an active THz absorber composed of a silicon pillar array integrated with LC. Through spatially reorienting the LC directors with bias, its absorption peak degenerated into two small peaks, and the absorption at the resonance frequency half reduced. The proposed design adds a new candidate beyond traditional broadband and frequency tuning absorbers. The switchable absorption will benefit various applications such as energy harvesting and spatial light modulations. Also, the polarization sensitivity of the proposed device may have potential in polarization detectors. This work may supply a practical approach for active THz metadevice fabrication and may further inspire various advanced THz apparatuses in sensing, switching, imaging, and filtering.

S.Z. conceived the idea of tunable metamaterial absorber and performed the numerical simulations; Z.S. and R.K. analyzed the simulations and modified the article; S.G. and W.H. supervised the whole work.

This research was supported by the National Key Research and Development Program of China (2017YFA0303700), the National Natural Science Foundation of China (NSFC) (Nos. 61575093, 61490714, and 61435008), the Distinguished Young Scholars Fund of Jiangsu Province (BK20180004), the Fundamental Research Funds for the Central Universities, and Jiangsu Donghai Silicon Industry Science and Technology Innovation Center. 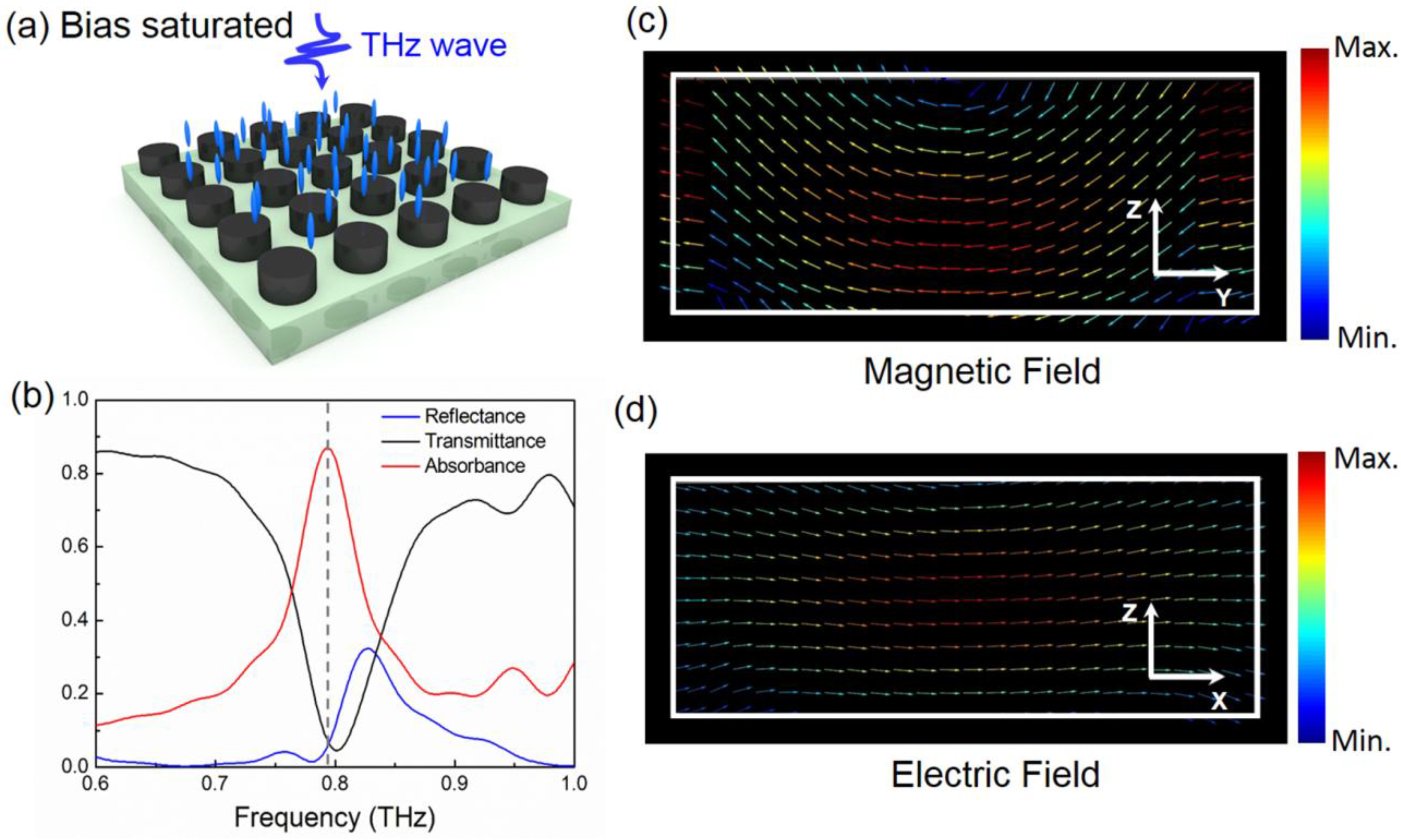