Since its discovery, the process of high-order harmonic (HH) generation in gas has been at the center of experimental and theoretical investigations for studies of electronic structure and ultrafast dynamics of atoms, molecules and condensed matters [1]. Moreover, the radiation generated with the scheme of the HHs using few-optical-cycles laser pulses is at present the central tool for the investigation of matter with attosecond resolution [2]. HH generation occurs when an electron, liberated from an atom or molecule by an intense ultrashort laser fields, gains energy from the field and recombines with the parent ion [3]. The HH spectrum is described as a sequence of peaks corresponding to the odd harmonics of the fundamental laser wavelength with an intensity distribution characterized by a plateau spanning into extreme-ultraviolet (XUV) and soft X-rays whose extension is related to the pulse intensity. Thus, HH radiation can be used to perform a large variety of time-resolved experiments without the need for big facilities like synchrotrons or free-electron lasers.
The selection of a single harmonic from consecutive multiple harmonics is required for many spectroscopic applications. Various methods are used, such as multilayer mirrors [4], selected enhancement by laser pulse shaping [5], zone-plate monochromators [6], gratings at grazing incidence [7].
In particular, the use of gratings to realize monochromatic beamlines with ultrafast time response is well established not only for HHs [8], but also for intense free-electron laser pulses [9]. Gratings give broad tunability, covering the whole XUV spectral region, and high spectral selectivity. Different configurations have been already realized: single-stage grating monochromators with high efficiency and response in the few tens of femtoseconds time-scale [10,11,12] and double-stage reflective-grating monochromators with ultrafast response below ten femtoseconds [13,14,15,16]. In the first case, when using a single grating, a residual pulse-front tilt due to diffraction has to be accepted at the output of the monochromator. It can be minimized by choosing a suitable geometry to obtain temporal responses in the range of few tens of femtoseconds [17]. In the second case, two consecutive gratings are employed: the first one performs the spectral selection on an intermediate slit while the second one corrects for the pulse-front tilt introduced by the diffraction.
In this paper, the temporal response of double-grating monochromators is analyzed considering two effects on the ultrafast pulse given by the configuration. The first effect is the compensation of the pulse-front tilt, i.e., all the rays emitted by the source in different directions at the same wavelength have to travel the same optical path. Ideally the compensation is perfect for a double-grating configuration, although aberrations may give a residual distortion of the pulse-front. The second effect is the group delay (GD) introduced by the two gratings, i.e., different wavelengths within the bandwidth transmitted by the slit travel different paths. Similarly to grating pulse shapers for optical laser pulses, the pair of gratings in the time-delay-compensating configuration can be considered as a XUV pulse shaper, capable to introduce a controllable GD. The methodology to calculate the GD introduced by the double-grating configuration is presented in Section 2. In terms of temporal response, the best operative condition for a monochromator is found when the GD and the Fourier limit for the given bandwidth are almost equivalent. For a narrower bandwidth, the GD decreases but the Fourier limit increases, giving a longer temporal response. For a broader bandwidth, the Fourier limit decreases but the GD increases, giving again a longer temporal response. Some practical design examples are provided to show the design rules and the expected performances.

Low-resolution monochromators are typically used with HHs when the monochromator is required to select a single harmonic within a broad plateau and behaves as a tunable broad-band filter. The bandwidth transmitted by the slit has to be narrow enough to resolve two adjacent harmonics, that are separated by 2λ0/[n(n + 2)], where λ0 is the laser wavelength that is used to generate HHs and n is an odd integer (A single laser wavelength is assumed to be used to generate HHs, therefore only odd harmonics are generated.). Indeed, the output bandwidth is limited by the source itself and not by the monochromator. Comparing Equations (1) and (2), the GD results negligible with respect to the Fourier limit for: where Δλ is the bandwidth of the pulse.
The calculations for typical parameters of low-resolution TDC monochromators are resumed in Figure 3. Two sets of gratings are used to span the 12–75 nm interval (i.e., harmonics H65-H11 of 800-nm Ti:Sa laser). XUV Fourier-limited 10 fs Gaussian pulses are assumed at the generation, of which the wavelength bandwidth is plotted in Figure 3a. The corresponding energy bandwidth is ΔE ≈ 180 meV. The bandwidth transmitted by the slit is also shown in Figure 3a: it is lower than the separation between consecutive harmonics, as requested for the selection of a single harmonic. The pulse-front tilt given by the first grating stage is plotted in Figure 3b for 4-mrad XUV divergence, that is a typical divergence for HHs generated by laser pulses in the millijoule range. The tilt is in the range 15–50 fs, therefore the original 10-fs pulse is stretched in time by the first grating. If monochromatic Fourier-limited pulses are requested at the output of the monochromator, a second grating stage is needed. The residual pulse-front distortion after the pulse-front tilt correction made by the second grating has been simulated through a ray-tracing procedure. For the parameters here assumed, it is lower than 0.5 fs within the whole interval of operation, therefore totally negligible. The GD and the GDD are plotted in Figure 3c,d for 10-fs Fourier-limited pulses. The GDD is below 10 fs2 and the GD is definitely lower than the Fourier limit, confirming that the TDC monochromator, when used as a broad-band filter, does not sensibly alter the duration of the pulse.

In case of high resolution, the output bandwidth is limited by the monochromator and not by the intrinsic bandwidth of the single harmonic. Once the slit aperture W is fixed, the bandwidth transmitted through the slit is:
In terms of temporal response, the best trade-off is found when the GD and the Fourier limit are almost equivalent. For a narrower bandwidth, the GD decreases but the Fourier limit increases. For a broader bandwidth, the Fourier limit decreases but the GD increases. The condition GD = Fourier is obtained combining Equations (1), (2) and (5) and, for Gaussian pulses, is expressed by:
Aim of the optical design is to find the parameters that fulfill Equation (6) to find the best trade-off between energy and temporal resolution.
A test case is here discussed for sub-150 meV energy bandwidth and sub-50 fs temporal response in the 20–120 nm (62–10 eV) interval, that are typical values required for ultrafast photoelectron spectroscopy. The requirements are resumed in Table 1. A set of parameters, in terms of groove density and lengths of the arms, is also listed in Table 1.
The performances, in terms of energy bandwidth and temporal response, are resumed in Figure 4. The slit width calculated by Equation (6) is shown in Figure 4a. It is the width giving an output bandwidth in which the GD is equal to the Fourier limit. The slit aperture is in the range 75–160 μm, that is a typical interval for practical operations. The corresponding bandwidth is shown in Figure 4b. By choosing the appropriate grating, the bandwidth is anyway below 100 meV for wavelengths longer than 32 nm. For shorter wavelengths, the bandwidth increases up to 150 meV at 25 nm. The pulse-front tilt given by the first grating stage is plotted in Figure 4c for 4-mrad XUV divergence. The tilt is definitely above 100 fs in the full range of operation. After the second grating, the residual pulse-front distortion, as simulated through a ray-tracing procedure, is lower than 2 fs within the whole interval of operation, i.e., fully negligible. The corresponding Fourier limit and GD are shown in Figure 4d,e and are in the range 10–30 fs in the whole interval of operation. The GDD is definitely higher than the low-resolution case, typically of the order of 100 fs2. The GD can be reduced if the grating-to-mirror distance p is kept higher, that is, for a lower q–p value, at the expense of a larger size of the monochromator. In this case, the use of a second grating stage increases the temporal resolution by almost one order of magnitude when compared to a monochromator with a single grating for the same output bandwidth.

The temporal response of double-grating monochromators has been analyzed, in particular the group delay introduced by the two gratings within the bandwidth, i.e., different wavelengths travel different paths. The analysis has been focused on monochromators for high-order laser harmonics. Two operative conditions have been described: (1) the low-resolution configuration, when the monochromator is used as a broadband filter and the output bandwidth is limited by the source itself, i.e., by the intrinsic bandwidth of a single harmonic; (2) the high-resolution configuration, when the monochromator aims to a bandwidth narrower than that of the single harmonic. In the first case the group delay is typically negligible, being in the sub- or few-femtoseconds time scale, well beyond the Fourier limit. In the second case, the group delay is comparable to the Fourier limit and is the main factor limiting the temporal response of the monochromator. The best operative condition, in terms of temporal response, is found when the group delay and the Fourier limit for the given bandwidth are almost equivalent. Obviously, the final operative conditions depend on the users’ requirements that can be fulfilled by a suitable trade-off between energy and time resolution.

The results presented in the paper have been partially funded by Extreme Light Infrastructures (ELI) funds of the Italian Ministry for Education, University and Research. 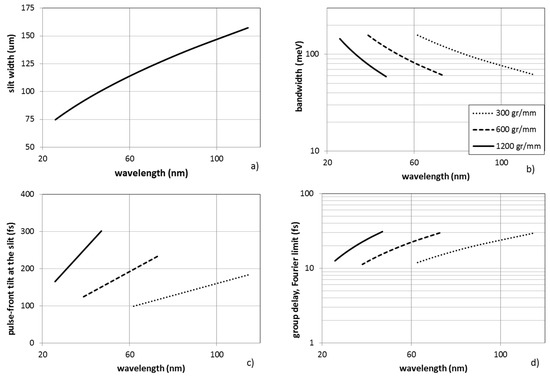