Numerical Investigation of Heat-Insulating Layers in a Cold Region Tunnel, Taking into Account Airflow and Heat Transfer
Next Article in Special Issue

Probing Physics in Vacuum Using an X-ray Free-Electron Laser, a High-Power Laser, and a High-Field Magnet

:
Molecules often fragment after photoionization in the gas phase. Usually, this process can only be investigated spectroscopically as long as there exists electron correlation between the photofragments. Important parameters, like their kinetic energy after separation, cannot be investigated. We are reporting on a femtosecond time-resolved Auger electron spectroscopy study concerning the photofragmentation dynamics of thymine. We observe the appearance of clearly distinguishable signatures from thymine′s neutral photofragment isocyanic acid. Furthermore, we observe a time-dependent shift of its spectrum, which we can attribute to the influence of the charged fragment on the Auger electron. This allows us to map our time-dependent dataset onto the fragmentation coordinate. The time dependence of the shift supports efficient transformation of the excess energy gained from photoionization into kinetic energy of the fragments. Our method is broadly applicable to the investigation of photofragmentation processes.
Keywords:
ultrafast dynamics; Auger electron spectroscopy; photofragmentation; photochemistry

The time-resolved fragmentation experiments on thymine were performed at the AMO (Atomic, Molecular and Optical physics) instrument of the LCLS (Linac Coherent Light Source) free electron laser. The instrument and some of its science are described in detail in [30,31]. Details of the setup we used for this particular experiment can be found in [17,32]. A sketch of the most important parts is given in Figure 2a. In short, thymine powder was evaporated in an oven at 140 °C with an outlet to the interaction region in the form of a heated capillary, thus forming an effusive jet in the collection volume of a magnetic bottle electron spectrometer.
A first UV pulse (hv = 4.65 eV, 70 fs duration) triggered the fragmentation process via resonance-enhanced three-photon ionization. A time-delayed free electron laser (FEL) soft X-ray pulse (hv = 570 eV, 70 fs duration) was used to create an oxygen core hole in the photoionized molecules. Auger electrons from O 1s core holes were detected with the magnetic bottle spectrometer as a function of time delay between UV excitation and X-ray probe pulses.
The time resolution of the experiment is about 330 fs, which is dominated by the jitter between the optical excitation and the FEL probe pulses. This is much larger than the time resolution observed in our study of the non-adiabatic dynamics in the neutral excited states of thymine [17], since we had not implemented the single shot optical X-ray cross-correlator [33] to compensate for the jitter between optical and FEL pulses in the data analysis for the fragmentation study reported here.
The steady state experiments on isolated HNCO were performed at the high-resolution photoelectron spectroscopy instrument of the PLEIADES beamline at the synchrotron SOLEIL [34]. A schematic overview is given in Figure 2b. Synchrotron light at a photon energy of hv = 570 eV and a bandwidth of 750 meV ionized the HNCO molecules contained in a differentially-pumped sample cell with entrance and exit windows for the synchrotron beam. The emitted O 1s Auger electrons in the direction of the light polarization were dispersed by a hemispherical analyzer. The monochromator, as well as the hemispherical analyzer were calibrated by measuring the photoabsorption and Auger spectra of CO2.
The isocyanic acid target was prepared according to the method described in [35]. After synthesis, the molecular sample was stored at liquid nitrogen temperatures to avoid polymerization. The vapor pressure at around −40 °C was sufficient to obtain the necessary molecular density inside the gas cell attached to the hemispherical analyzer.
The O1s core decay spectrum of HNCO has been calculated using the second-order Algebraic Diagrammatic Construction (ADC(2)), which is a well-established Green′s function-based direct method to compute double ionization and Auger spectra [36,37] in combination with a cc-pVDZ basis [38]. The details of the simulation are described in [17].

We conclude by pointing out the unique long-range sensitivity of Auger electron spectroscopy to the presence of charged particles, which allows one to map time-dependent signatures of fragments onto a dissociation coordinate. The important observable, the spectral shift with respect to field-free Auger decay, can be easily interpreted based on a Coulomb potential without recourse to more complicated theory. In principle, any probe process generating and detecting charged particles is sensitive to the Coulomb potential of a nearby charged fragment. However, the sensitivity is strongly reduced in the case of ion detection due to their orders of magnitude larger masses. Valence electron spectroscopy should, in principle, show the same effect. However, due to strong vibrational substructure in valence photoelectron spectra, the effect would be difficult to observe, Auger electron spectroscopy on the other hand has the dynamic range to observe both the signatures of the molecular ground state and of the fragmentation process. Moreover, due to the strong difference in DOFS, it provides distinct signatures of fragment generation. Future experiments are planned to exploit this powerful X-ray induced Auger electron technique.

This work was supported by the AMOS program within the Chemical Sciences, Geosciences, and Biosciences Division of the Office of Basic Energy Sciences, Office of Science, U.S. Department of Energy. Parts of this research were carried out at the Linac Coherent Light Source (LCLS) at the SLAC National Accelerator Laboratory. LCLS is an Office of Science User Facility operated for the U.S. Department of Energy Office of Science by Stanford University. Parts of this research were carried out at the PLEIADES beamline, Soleil Synchrotron, France. MG acknowledges funding via the Office of Science Early Career Research Program through the Office of Basic Energy Sciences, U.S. Department of Energy and NB under grant no. DE-SC0012376. MG is funded by a Lichtenberg Professorship from the Volkswagen foundation. IF acknowledges DFG, Project FI 575/7-3 for funding. TJAW thanks the German National Academy of Sciences Leopoldina for a fellowship (Grant No. LPDS2013-14). R.F. acknowledges funding from the Swedish Research Council (VR), the Göran Gustafsson Foundation and the Knut and Alice Wallenberg Foundation, Sweden. We thank S. Miyabe, A. Aguilar, J. C. Castagna, L. Fang, J. M. Glownia, B. Murphy, A. Natan, T. Osipov, V. S. Petrovic, S. Schorb, T. Schultz, L. S. Spector, M. Swiggers, I. Tenney, S. Wang, and J. L. White for contributions to the thymine experimental data. 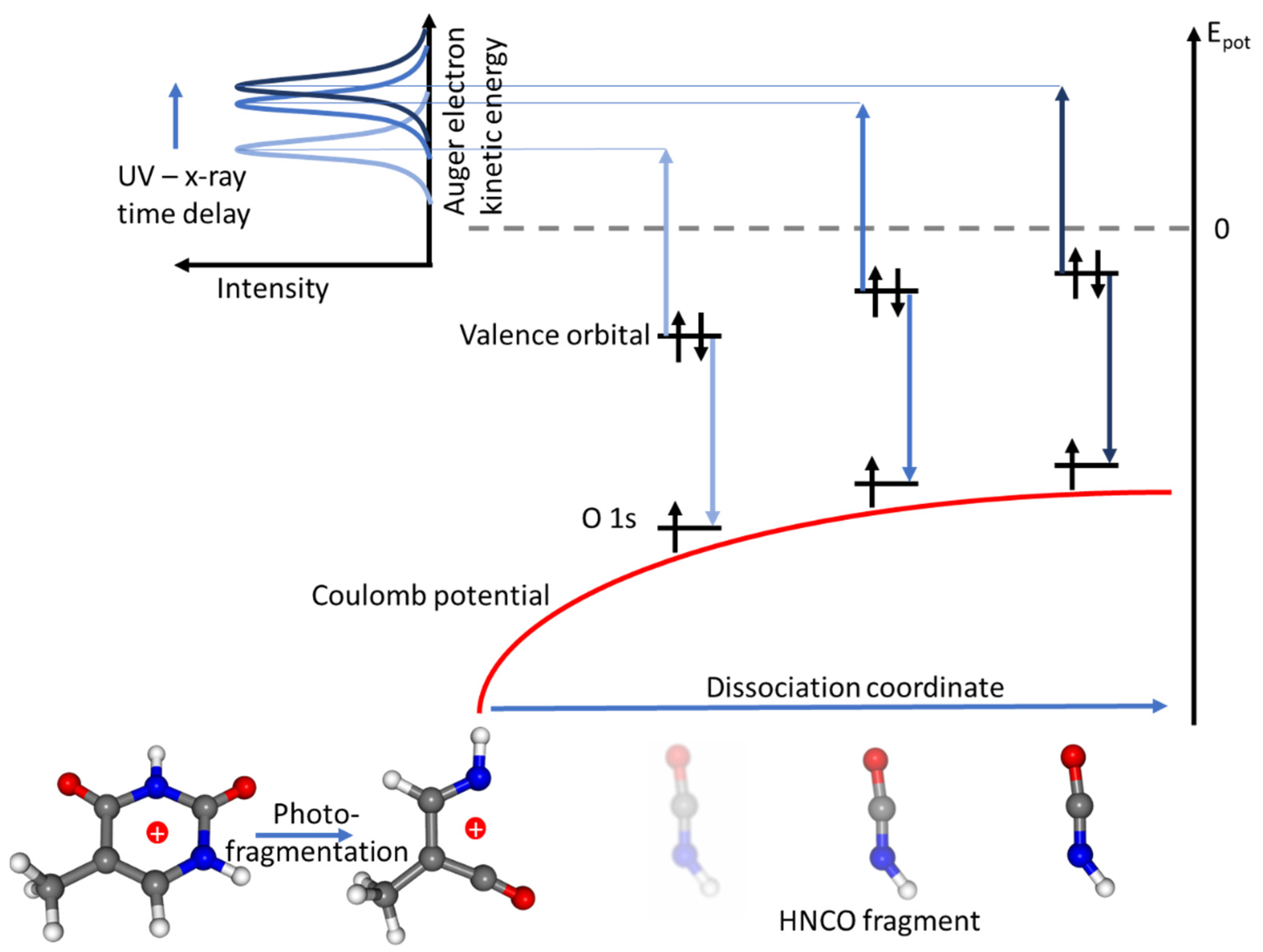 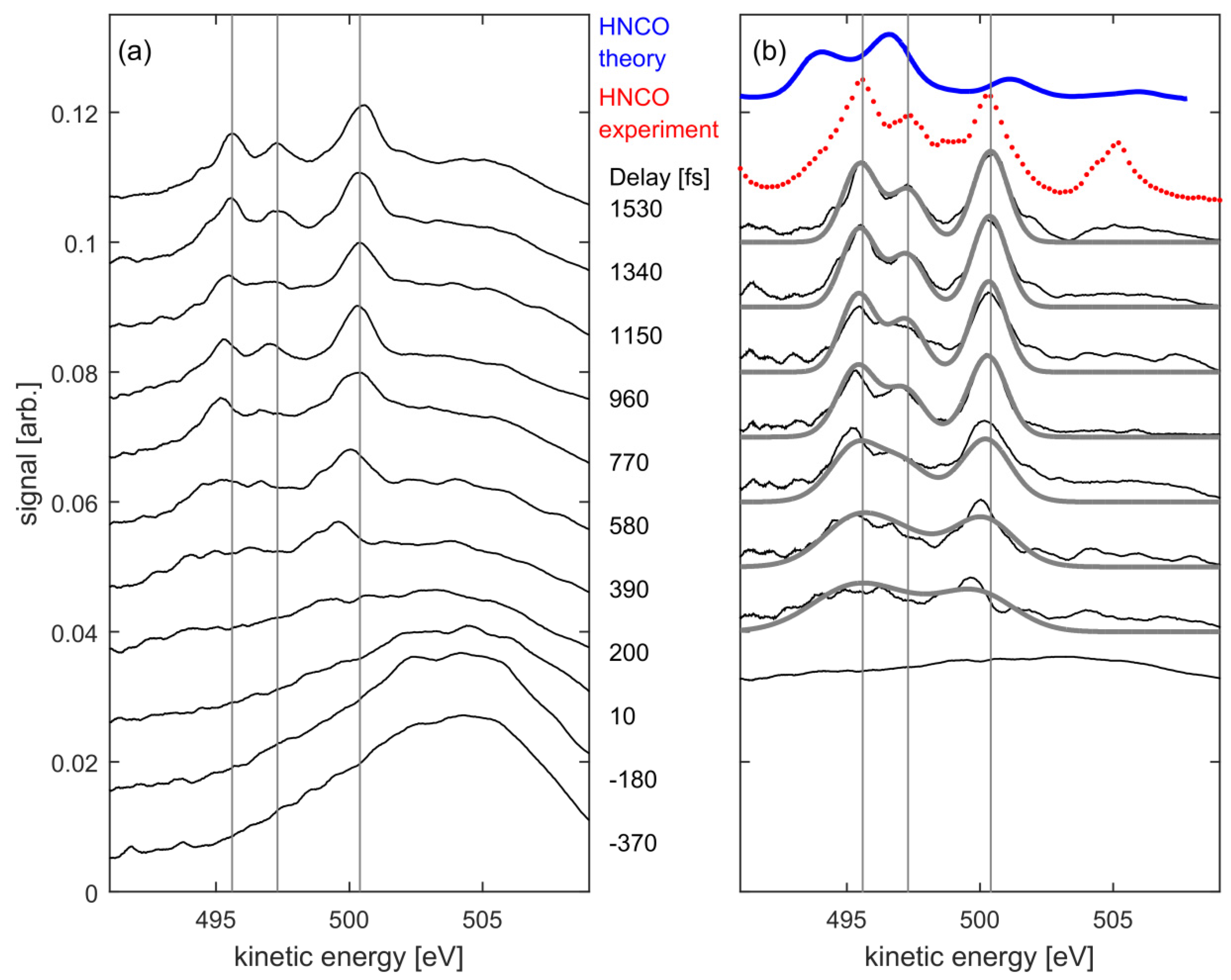