Sensing Performance of a Vibrotactile Glove for Deaf-Blind People

Gyroscopes have been used in previous studies to measure the peak angular velocity of the shoe or foot in the frontal plane (evVel). However, it is not clear whether different test conditions (footwear hardness or locomotion speed) can influence the accuracy of evVel. The purpose of the present study was to compare the accuracy of gyroscopes and electrogoniometers when measuring evVel and the time until evVel (t_evVel) in 12 different conditions using a single axis gyroscope attached to the heel cap. Twenty-four recreational runners were instructed to walk and run on a 15-m indoor track at four locomotion speeds (1.5, 2.5, and 3.5 m/s, and individual running speed) and in three footwear conditions (low to high hardness). The gyroscope data and electrogoniometer data were sampled at a rate of 1000 Hz. Comparisons between both measurement devices showed small mean differences up to 49.8 ± 46.9 deg/s for evVel and up to 5.3 ± 3.5 ms for t_evVel. Furthermore, strong relationships between gyroscope and electrogoniometer data were found for evVel as well as for t_evVel for all conditions. It can be concluded that gyroscopes can be used to accurately determine evVel and t_evVel under a variety of conditions. View Full-Text
Keywords: peak eversion velocity; gyroscope; electrogoniometer; running speed; footwear; material characteristics peak eversion velocity; gyroscope; electrogoniometer; running speed; footwear; material characteristics
►▼ Show Figures 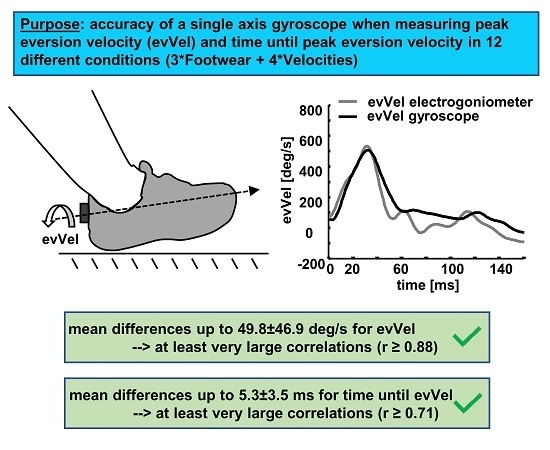