Four Channel 6.5 kV, 65 A, 100 ns–100 µs Generator with Advanced Control of Pulse and Burst Protocols for Biomedical and Biotechnological Applications

Cold atmospheric plasma (CAP) has become a promising tool for modern medicine. With its recent applications in oncology, regenerative medicine, and immunotherapy, CAP can be used for a myriad of different clinical treatments. When using CAP specifically for the treatment of tumors, it is known to elicit an oxidative response within malignant cancer cells, inducing cell cycle arrest and apoptosis. In this study, data of intracellular reactive oxygen species (ROS), caspase activity, Ki-67 expression, and cell cycle activity in the G1 phase were acquired to determine the causal relationships these intermediates have with cell proliferation and death after Canady Helios Cold Plasma (CHCP) treatment. The data were derived from four different subtypes of breast cancer cell lines: BT-474, MCF-7, MDA-MB-231, and SK-BR-3. Data transformation techniques were conducted on the time-series data for the input into the causal model code. The models were created on the basis of Granger causality principles. Our results demonstrated that there was a Granger causal relationship among all potentially causal variables (ROS, caspase, Ki-67, and G1 activity) and cell proliferation after 5 min CHCP treatment; however, not all variables were causal for the 3 min models. This same pattern did not exist for cell death models, which tested all potentially causal variables (ROS, Ki-67, and G1 activity) vs. caspase activity. All models were validated through a variety of statistical tests and forecasting accuracy metrics. A pseudo data set with defined causal links was also created to test R’s ability in picking up known causal relationships. These models, while nonexhaustive, elucidated the effects cold plasma has on cell activity regulators. Research in causal modeling is needed to help verify the exact mechanism of cold plasma for the ultimate optimization of its application in the treatment of cancers. View Full-Text
Keywords: cold atmospheric plasma (CAP); reactive oxygen species (ROS); caspase; Ki-67; cell cycle; Granger causality cold atmospheric plasma (CAP); reactive oxygen species (ROS); caspase; Ki-67; cell cycle; Granger causality
►▼ Show Figures 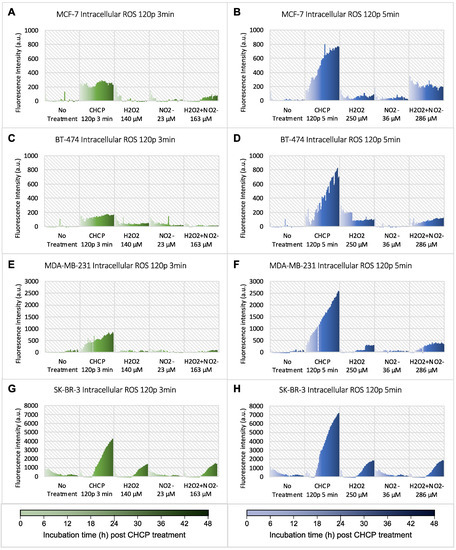