Classification of Malicious URLs by CNN Model Based on Genetic Algorithm

In this paper, the URL was analyzed and processed. Firstly, the data were preprocessed. By observing the content contained in the URL and comparing the malicious URL with the benign URL, the initial feature data set was obtained. In order to further improve the efficiency of data processing, the feature vector is reduced by the feature extraction method of the genetic algorithm.
Genetic Algorithm (GA) is a computer simulation study of biological systems. It is a stochastic global search and optimization method that imitates the mechanism of natural evolution. Its essence is an efficient global search method with parallel ability, which can search the whole solution quickly without falling into the trap of local optimum. At the same time, the genetic algorithm does not have the limitation of derivation and function continuity. The probabilistic optimization method can automatically obtain and guide the optimized search space, adaptively adjust the search direction, and does not need to determine the rules.
The feature extraction process of the genetic algorithm is shown in Figure 1. Firstly, the features were encoded and the population was initialized, and the fitness of the individuals corresponding to each chromosome was evaluated. Following the principle that the greater the fitness, the greater the probability of being selected, two individuals were selected from the population as parents, and the crossover operation was performed to generate offspring, and then the chromosomes of the offspring were mutated. Repeat the above steps until a new population is generated.

The result of feature selection based on a genetic algorithm mainly depends on the definition of the fitness function. This paper uses the accuracy of support vector machine (SVM) classification as the fitness function. The selected features are directly classified by the support vector machine algorithm, and the accuracy rate is obtained. The accuracy rate is used to determine whether it is the optimal feature. The support vector machine is based on the principle of structural risk minimization, which has strong generalization ability and global optimality. Let be the vector of the sample after mapping, and divide the hyperplane into Equation (1).
In Equation (1), is the weight vector and is the offset. Transform the problem into a quadratic programming problem, where , is a relaxation variable, and the data can be correctly classified when ; when , data are misclassified. , is the penalty parameter. The dual form of the problem is,
Here, is the Lagrange multiplier and is the target value. According to the KKT condition in optimization theory, only a small number of sample values are not zero. Solving nonlinear transformation needs to define kernel function. In this paper, the Gaussian kernel is used: where is the kernel parameter. When the value is too large or too small, it will produce too-small or too-large training errors. Finally, the accuracy of the classification results as a fitness function.

The function of crossover is to inherit the excellent genes of the parent population to the filial generation to ensure the search ability and stability of the genetic algorithm. The crossover operator used in this paper is a single-point crossover. Two chromosomes are selected, and the genetic genes of the two parts are segmented and exchanged at random positions to obtain two different offspring chromosomes.
As shown in Figure 2, P1 and P2 on the left represent two individuals of the parent. A point is randomly selected from the two parent chromosomes (the part indicated by the arrow in the figure) as a crossover breakpoint, and the part after the point is exchanged to obtain two different offspring chromosomes C1 and C2, on the right side of the figure.
The mutation is to change the genetic gene on the chromosome by random selection and flips the gene in the individual. If the gene is 0, the mutation is 1; if the gene is 1, the variation is 0.

When the operation reaches the maximum number of iterations, or the fitness of the current population reaches 0.999, the algorithm terminates.

The software and hardware equipment and tools used in the experiment are shown in Table 1.

This paper uses this model to identify malicious URLs. The URL data set needs to contain benign URLs and malicious URLs. The data used in this paper are the required URL obtained by the Python crawler. PhishTank obtains 29,873 malicious URL data. PhishTank contains a large number of suspicious phishing websites, forming a database of phishing websites. Therefore, this paper selects these data as a malicious URL data set. Alexa obtains 29,700 benign URL data. Alexa is a traffic statistics website. The website ranked according to the current traffic has relatively high security. Therefore, this paper selects the URL on the ranking as a benign URL data set.
Table 2 is a partial table of the obtained original data set, where id is the number of each url, url represents a malicious URL or a benign URL, the flag represents an identifier of url type, the flag is p indicates that the url is a malicious url, flag is n indicates that the url is a benign url.
By analyzing the characters contained in the URL, the URL data are preprocessed by observing the type and number of characters contained in the benign URL and the malicious URL, and 34 features are selected as the initial feature vector of the URL, denoted by F1 = {f1,f2,…,f34}.

Repeat the selection, crossover, and mutation operations of the new generation population, and set the number of iterations to 100. The algorithm is terminated when the maximum number of iterations is reached, and the result of the last generation is the result of feature extraction. In this paper, several experimental tests were carried out, and finally, 20 features with high accuracy were obtained. Table 3 is the data set of 20 features obtained after feature extraction. When the flag is 0, it represents a benign URL, and when the flag is 1, it represents a malicious URL.
The experimental results show that a total of 20 features are selected as F2 = {f1, f2, f3,..., f20}, including the number of reserved characters, the number of other characters, the number of numbers, the maximum length of continuous letters, the maximum length of continuous numbers, the quantitative relationship between ‘?’ and ‘=’, the quantitative relationship between ‘=’ and ‘&’, the total length of the domain name, the domain name series, the longest string length of the domain name, the number of numbers in the domain name, whether the path contains the domain name, the path series, the ratio of the longest path to the path length, whether the file name contains more than two levels of extensions, the maximum length of the sub-path, the conversion frequency of numbers and letters in the URL, the proportion of vowel–consonant characters in the URL, the proportion of number characters in the domain name to the domain name, and whether the top-level domain name is five domain names. Figure 3 shows the optimal fitness value of each generation selected during the evolution process. Through 100 iterations, the final fitness of the new generation population reached 0.91.
The genetic algorithm can quickly reach more than 90% of the optimal solution and global search capability, and parameter setting is relatively easy. Compared with the traditional method of feature extraction, it avoids easy to fall into the local optimum and solves the defect of not finding the optimal global solution.

In order to improve the accuracy of malicious URL recognition, this paper proposes a model of a convolutional neural network based on a genetic algorithm. Firstly, this paper extracts the grammatical features, structural features, and probabilistic features in the URL text by comparing the malicious URL with the benign URL, reduces the dimension of the features by genetic algorithm to obtain the final 20 vectors, and then uses the convolutional neural network to classify and identify the 20 features. Finally, compared with the traditional machine learning algorithm, the recognition rate of malicious URL detection is improved. The experimental results show that the accuracy of the model in malicious URL classification is 93.99%, which achieves the expected classification effect.
In malicious URL detection, the model proposed in this paper has a better effect than directly detecting the entire URL text content by extracting insignificant features in the URL. Second, the genetic algorithm is used to reduce the dimension of the extracted features, and the redundant features are removed to reduce the computational overhead. Third, when using the advantages of convolutional neural networks, the classification effect is better while sharing parameters in the convolutional layer, reducing the use of parameters.
However, there are still some limitations in the experiment. The genetic algorithm can obtain the global optimal feature subset and effectively improve the accuracy of malicious URL recognition. However, there are many parameters used in the calculation process; the calculation amount is large, and the experiment takes a long time. This model cannot detect targets in real time. Therefore, in order to solve these problems, our further research work is to optimize the model around how to reduce the feature vector space while reducing the time complexity and exploring the method of detecting malicious URLs in real time. 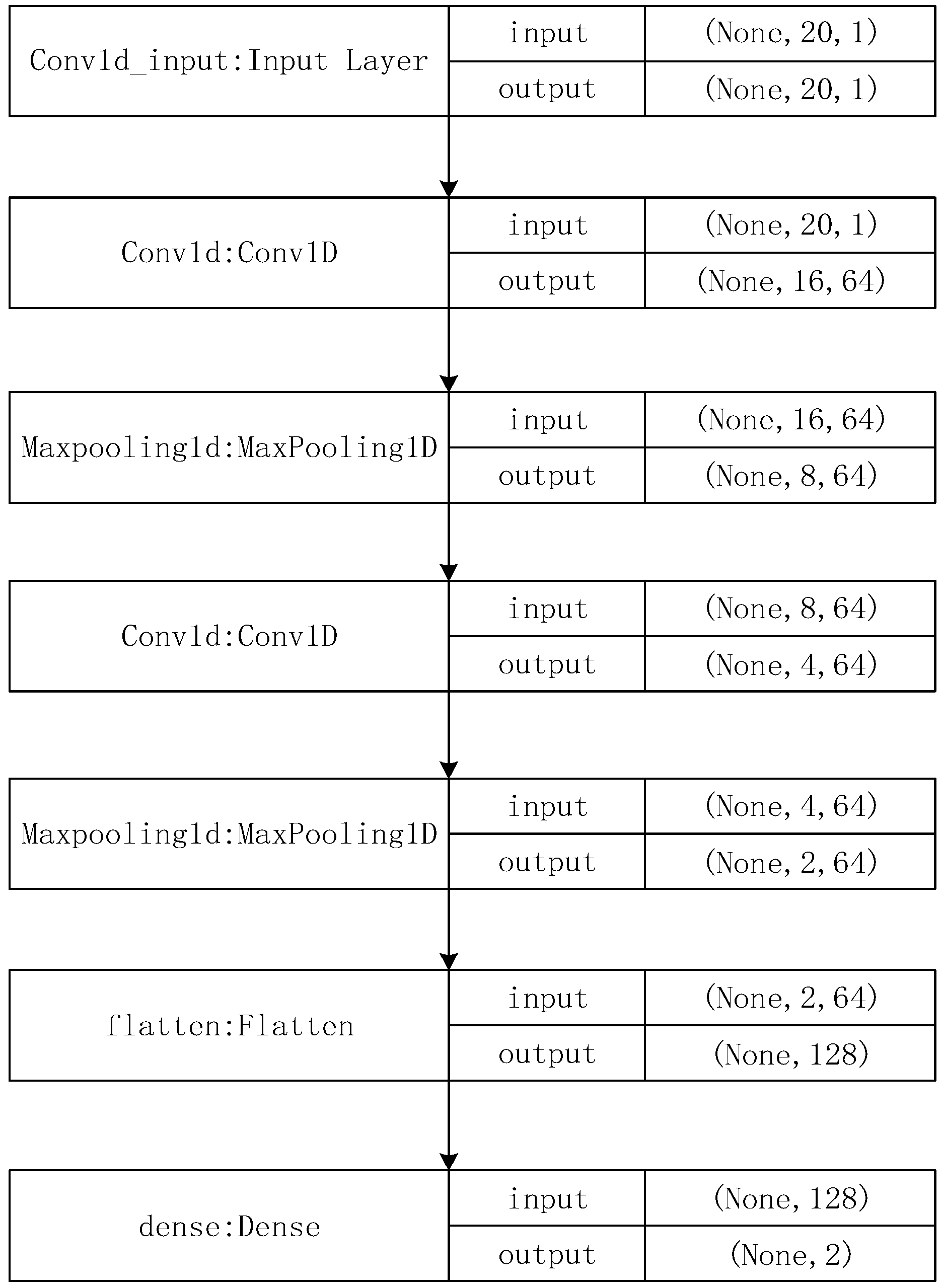 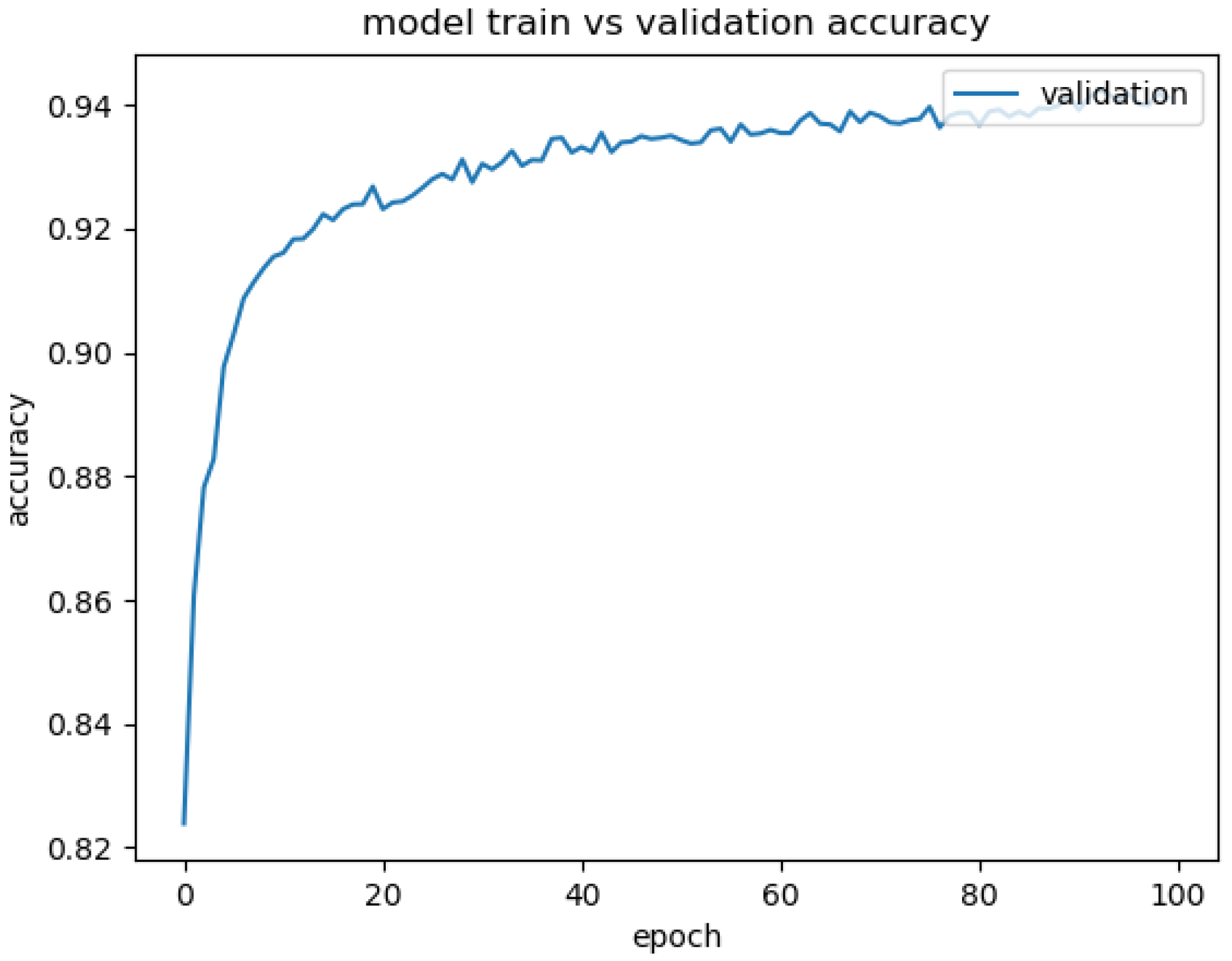