Visual Attention Software: A New Tool for Understanding the “Subliminal” Experience of the Built Environment
Previous Article in Journal

This section gives an overview of previous research that is closely related to ours. This includes the work done related to human performance in latent fingerprint minutiae extraction and matching, as well as the work related to the performance of fingerprint matching algorithms when the input is modified or distorted.

2.1. Research on the Performance of Experts in Latent Fingerprint Analysis

In this section, we present an analysis on the performance of fingerprint identification systems in the presence of different distortions.
Studying the impact of fingerprint variations on fingerprint identification has attracted some attention in the last two decades, including position variability [35] and other distortions [10].
The most up-to-date and comprehensive work in this regard may be Grosz et al. [37], who performed a white-box evaluation of three fingerprint matchers so as to assess how different perturbations in fingerprints affect the matchers’ scores. Of these algorithms, one, called SourceAFIS, was open-source and the other two were unnamed, minutiae-based commercial-off-the-shelf (COTS) matchers. Authors evaluated the robustness of these matchers against controlled perturbations of the fingerprints, specifically perturbations of minutiae sets. The fingerprint dataset used in this experimentation consists of fingerprint impressions, synthetically generated through SFinGe [38]. It is composed of different “master” fingerprints, each of which was used to generate two different impressions. For performance evaluation, Grosz et al. also generated a ground-truth minutiae set for each fingerprint.
Authors ran experiments where fingerprint impressions involved the following perturbations: (i) moving and rotating minutiae; (ii) adding spurious minutiae and removing ground-truth minutiae; (iii) considering a non-linear distortion of the minutiae sets; and (iv) combining the displacement and rotation of minutiae with the addition of spurious minutiae and removal of ground truth minutiae. The first two perturbations were generated by using a multivariate Gaussian Distribution model, which had parameters the researchers considered to model real possible perturbations. The non-linear perturbations were generated by using a non-linear distortion model learned from distorted fingerprints. Using these distortions, the authors performed two different experiments: (a) an analysis of uncertainty resulting from realistic amounts of perturbation and distortion; and (b) an evaluation of the recognition performance of each minutia-based matcher on increasing levels of perturbation and distortion.
To perform the uncertainty analysis, Grosz et al. generated 100 perturbations per perturbation type, per generated fingerprint. They obtained similarity scores and used them to calculate a global uncertainty score relating to each perturbation type. When performing the second experiment, the authors increased the perturbation parameters throughout eight iterations. The results of this experiment are reported as true acceptance rate at a fixed false acceptance rate of . They also calculated impostor scores for each perturbation type, on each iteration. The authors found out that the non-linear distortion is the perturbation that reduced the mean of the similarity scores the greatest, followed by the combined perturbation, and after that, the removal of ground truth minutiae. The experiments suggested that the fingerprint identification algorithms are robust to elevate percentages of missing minutiae. The large number of minutiae in these experiments allows to maintain a competitive identification performance after missing minutiae.

This section describes the database used and its characteristics. After, the two tested matching algorithms are presented. Finally, our experimental setup is presented.
We used the database NIST SD27 [23], which is a public database widely used in latent fingerprint studies [13,39]. NIST SD27 contains images of 258 latent crime scene fingerprints with their manually marked minutiae, as well as their matched tenprint impressions with their extracted minutiae. The average number of minutiae in latent fingerprint images in NIST SD27 is 20, while the average number of minutiae in the corresponding impressions is 106.
Additionally, for some experiments, we used the NIST SD4 [40] as a background database. This database contains images of 2000 rolled fingerprints.
For determining the impact of our study on fingerprint identification, we used two matching algorithms that have demonstrated highly competitive performance in latent fingerprint identification:
We used CMC [42] curves as an evaluation measure adopting the norm ISO/IEC 19795-1, which indicates that CMC curves should be used for closed-set identification. As numerical measures of the CMC curve, we use from Rank-1 to Rank-100 identification rates. Notice that these ranks quantify the ratio of correct identifications in the first place and among the 100 first ranks, respectively, returned by an identification algorithm.
Our protocol consisted of three sets of experiments in which we removed minutiae from fingerprints and evaluated the impact of such minutiae removal on the two selected matching algorithms plus a final prediction experiment:
It is important to highlight that, for all experiments, the minutiae were not removed from fingerprints if a fingerprint was to be left with less than six minutiae, based on what INTERPOL recommends as a minimum for an AFIS [43].

5. Evaluating the Impact of Minutiae Errors

6. Predicting the Impact of Minutiae Errors

In the previous section, we showed that removing minutiae can decrease or increase the score of fingerprint matching algorithms. If we could automatically predict the impact of the minutiae in the score before performing latent fingerprint identification, we could: (1) help the forensics experts to improve their minutiae labeling process to maximize the probability that they find minutiae that lead to successful latent fingerprint identification [16], and (2) improve automated algorithms for latent fingerprint processing and recognition using quality-based processing [44] and quality-based information fusion [45,46,47]. With these goals in mind, we developed a framework to determine if it is possible to predict if a given minutia will have a positive or negative effect on the score of fingerprint matching. Thus, we could develop tools for forensics examiners to automatically classify regions by its impact on the performance of the identification algorithm, or quality-based algorithms for latent fingerprint processing [45,46].
This framework was created by using the results of removing every possible combination of one minutia from a fingerprint, as described in the previous section for the DMC matcher. We created features based on the location of each minutia and the distances of neighboring minutiae. We designed two different types of features: (1) the first type counts the number of minutiae in a radius neighboring the specified minutia, and (2) the second type is the distance from the specified minutia to the n closest minutia. Finally, the class values positive and negative were used for minutiae that, after being removed, increased or decreased the matching score, respectively. In the end, each datum point in the created dataset has the following information:
In total, this dataset has 12 features and a class feature. It contains 5215 instances, of which 1991 are positive examples (minutiae that increase the matching score when removed) and 3224 are negative examples (minutiae that lower the matching score when removed).
We tested eight different supervised classifiers. We selected popular classifiers of different types to get varied results. For each algorithm, we did five-fold distribution balanced stratified cross-validation [48], which is used for imbalanced class problems. We evaluated each algorithm with the area under the receiver operating characteristic curve (AUC) [49]. The AUC is calculated as: where TPR is true positive rate and FPR is false positive rate.
The eight supervised classifiers that we used were:
Figure 11 shows a bar graph comparing the average AUC of each supervised classifier when using five-fold distribution balanced stratified cross-validation. From Figure 11, we can see that PBC4cip [50] has the best performance with an AUC of , closely followed by FLDA and Random Forest [51]. The accuracy is still low, but these results suggest the existence of certain information that can be exploited to predict if a minutia will increase or decrease the matching score of a fingerprint with a better than random AUC.
These results open a new research line related to creating automatic algorithms that help forensics experts to improve the minutiae labeling process in latent fingerprints.

Aiming to develop automatic methods that can help latent fingerprint examiners make better decisions and can enable quality-based fingerprint processing, we carried out a study of how minutiae errors can affect the identification of latent fingerprints. Both human experts [28] and automatic algorithms [13] commit errors when labeling latent fingerprint minutiae. There is some knowledge already in the literature about the source and factors that originate those errors in both cases: human experts [26,27,28] and algorithms [13,21], but there is a lack of understanding of how those errors impact fingerprint identification systems. The present work is a step forward in understanding the impact of those minutiae errors.
From our experimental results, we can conclude that missing even one minutia from a fingerprint can have a very high negative impact on identification performance. In addition, some minutiae are more important than others to identify a latent fingerprint correctly. We also conclude that a result in the first places of the rank could be demoted to the last places of the rank when two or more minutiae (labeled as “lower” class) are removed. This fact of varying minutiae utility, or minutiae quality in terms of biometric utility [18], can enable specific processing for different minutiae [13] in quality-based conditional processing [44] or quality-based information fusion schemes [45,46,47].
In future work, we plan to deepen our study on what features make a minutia or a minutiae combination more important for identification performance. In addition, ongoing work is around determining critical areas of a latent fingerprint image in which missing a minutia could make the matching algorithms fail to identify a fingerprint correctly. 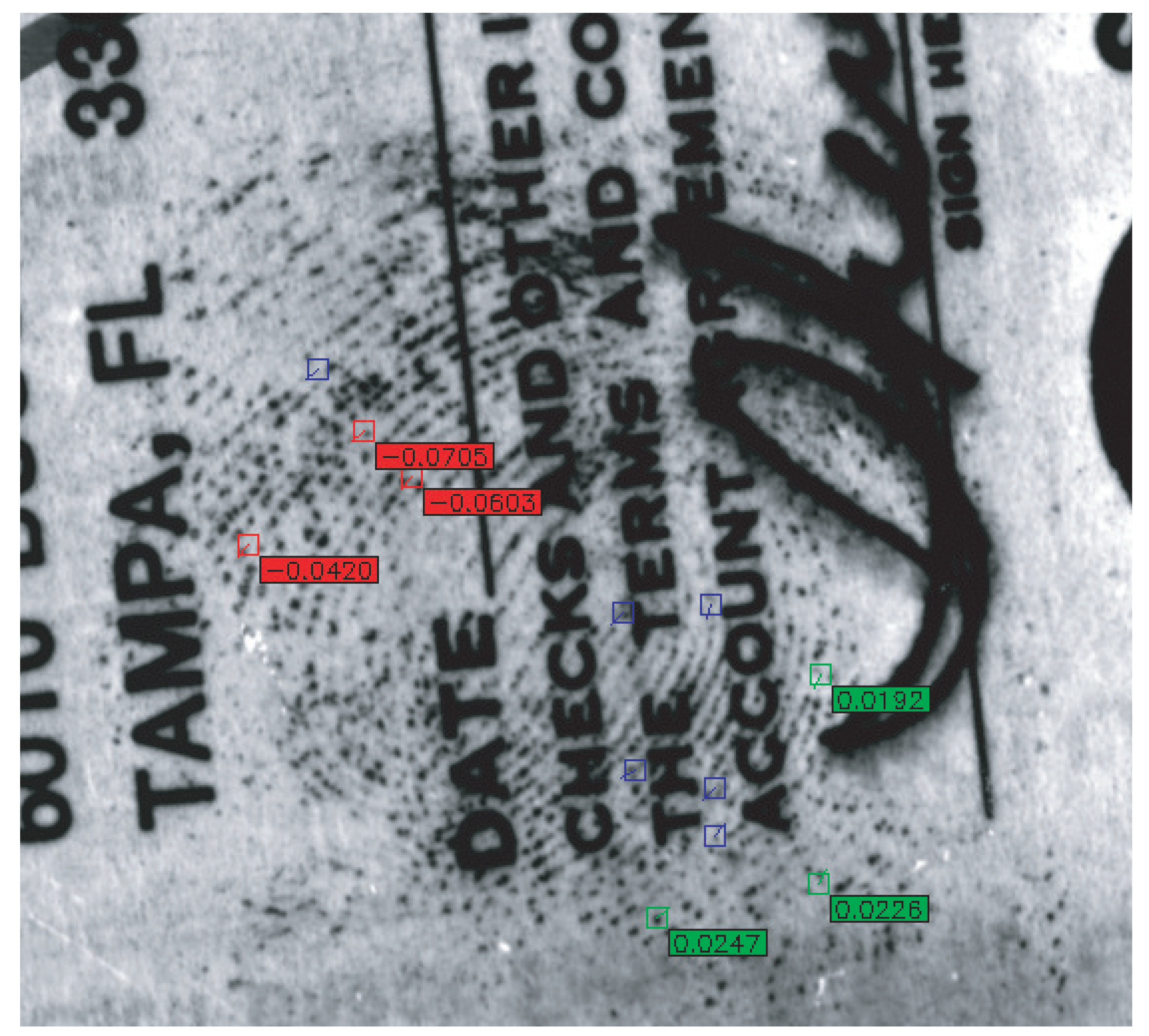 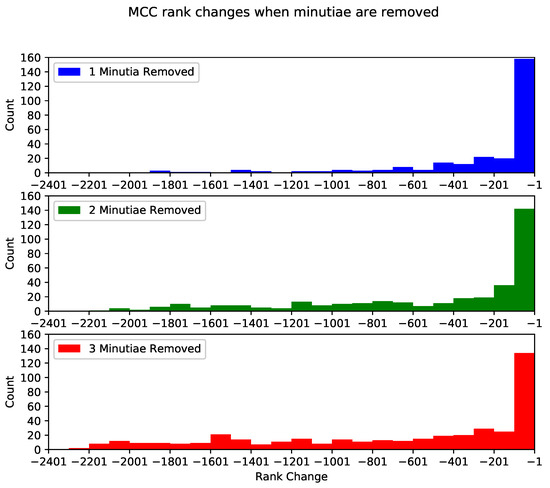 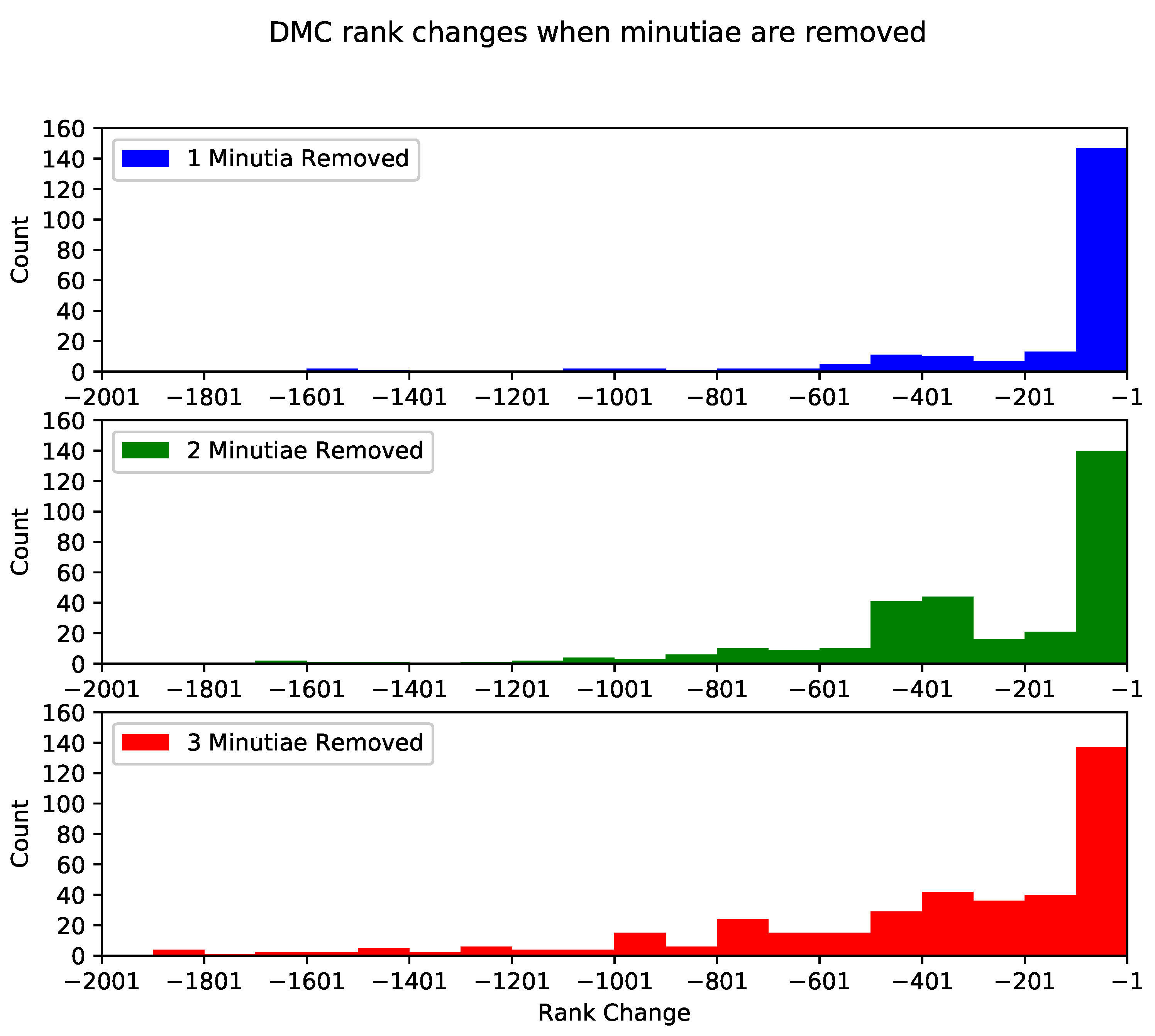 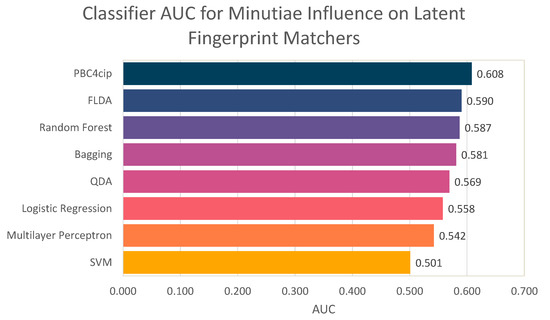 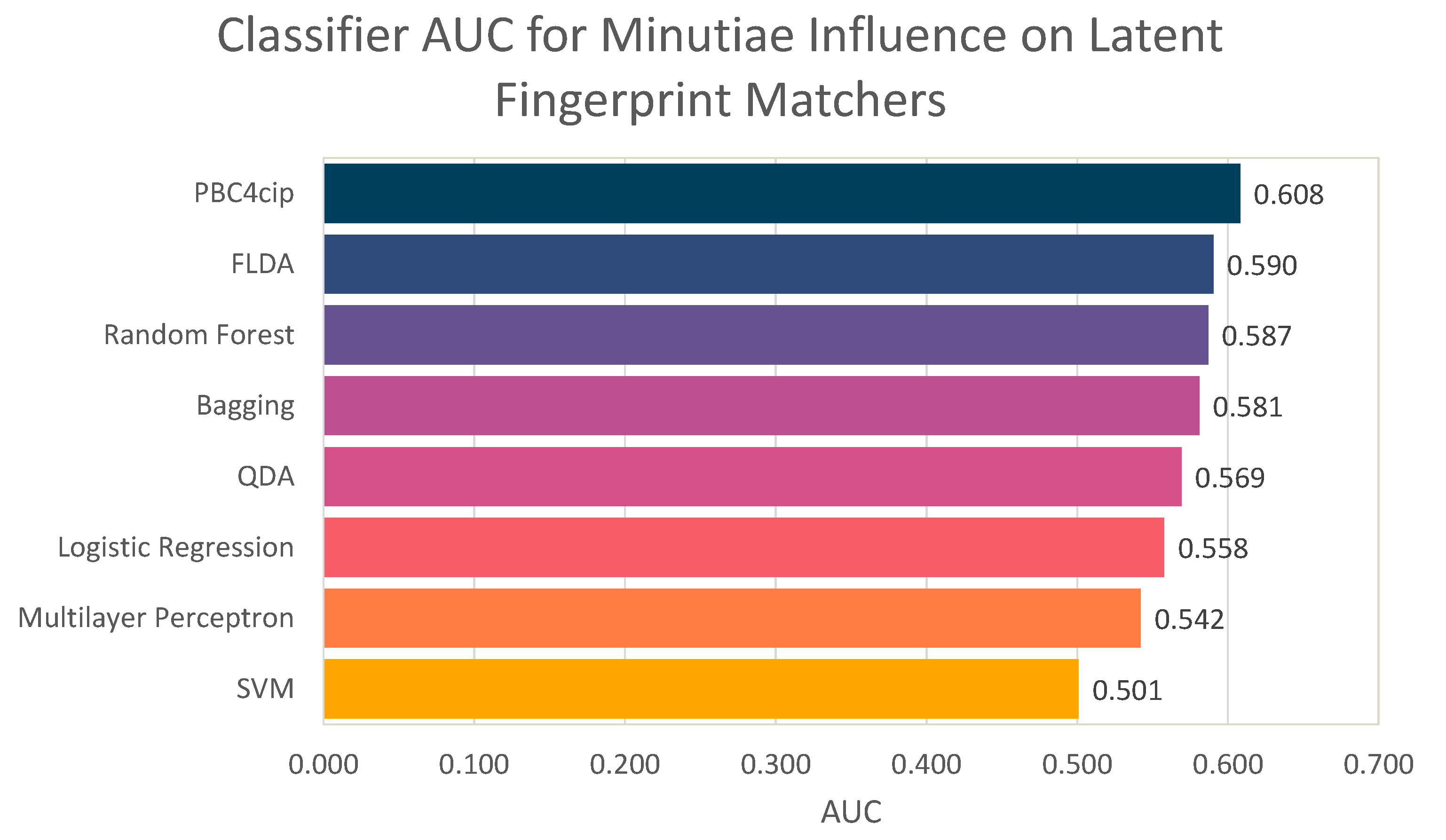