Could Gnomoniopsis castaneae Be Used as a Biological Control Agent against Insect Pests?
Previous Article in Journal

Spodoptera frugiperda is a widely distributed insect pest that causes major economic losses in various crops, particularly maize. On the other hand, Beauveria bassiana is an entomopathogenic fungus that establishes symbiotic associations with many plants and contributes to tolerance against biotic and abiotic stresses. In the present work, in laboratory experiments, the effects of the B. bassiana strain GHA, in addition to a native strain (PTG4), delivered via seed treatment in maize seedlings, were evaluated on S. frugiperda growth, development, and mortality. We inoculated maize seeds with 1 × 106B. bassiana blastospores; then these seeds were germinated and grown to seedlings under growth chamber conditions. Third-instar S. frugiperda larvae were allowed to feed on B. bassiana-treated and -untreated (negative control) seedlings until reaching the sixth instar and transferred to an artificial diet until reaching adult stage. Results showed that larvae feeding on B. bassiana strain PTG4-treated plants prolonged their larval stage. Furthermore, feeding on plants treated with B. bassiana strains yielded fewer S. frugiperda male moths compared with feeding with the untreated control plants. Under field conditions, 1 × 106 (first trial) and 1 × 108 (second trial) of B. bassiana (GHA strain) blastospores were used for corn seed inoculation. In the first field trial, there were a higher number of larvae in the negative control plants compared to those in the plants treated with B. bassiana. No larvae were found in negative control and B. bassiana-treated plants in the second field trial. In conclusion, seed treatment with B. bassiana in maize reduced S. frugiperda infestation of maize plants in field trials. S. frugiperda development was also affected in laboratory trials. View Full-Text
Keywords: Beauveria bassiana; biological control; entomopathogenic fungi; Spodoptera frugiperda; Zea mays Beauveria bassiana; biological control; entomopathogenic fungi; Spodoptera frugiperda; Zea mays
►▼ Show Figures 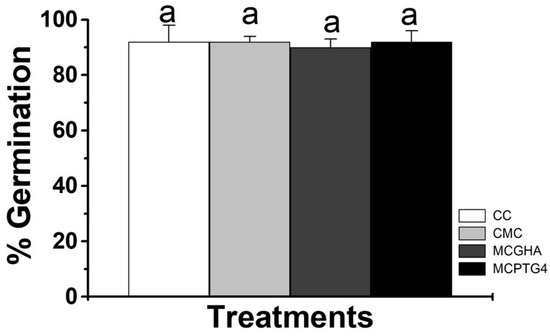