In a triple-hole system comprising a primary hole and two sister holes, when the sister holes are positioned slightly downstream of the main hole under steady flow conditions, their jets generate an anti-counter-rotating vortex pair. Vortex interactions between the jets increase the effectiveness of adiabatic film cooling. In this study, a series of large-eddy simulations were conducted to understand how pulsations in the main flow affect film cooling in a triple hole. To understand the effects of pulsations on film cooling performance is important for better cooling design of the gas turbine engines. The numerical simulations were carried out on a flat plate geometry with a triple cylindrical hole system at 35° injection angle. The pulsations were approximately sinusoidal, and their effect on film cooling was investigated at several frequencies (2, 16, and 32 Hz) and Strouhal numbers (Sr = 0.1005, 0.8043, and 1.6085) at an average blowing ratio of 0.5. The results for the triple-hole system were compared with those for a single hole for the same amount of cooling air and the same cross-sectional area of the holes. Increasing the Strouhal number of the main flow decreased η in both systems. However, at each Strouhal number, η was higher in the triple hole. Furthermore, the triple-hole system was found to be better for film cooling than a single-hole system for higher values of the pulsation Strouhal number. Contours of time-averaged film cooling effectiveness and dimensionless temperature, instantaneous film cooling effectiveness contours on a test plate, mean velocity magnitude contours in the hole, and Q-contours for the triple holes under the application of pulsations to the flow were investigated. View Full-Text
Keywords: large-eddy simulation; turbine blade cooling system; adiabatic film cooling effectiveness; bulk flow pulsation; triple cooling hole configuration large-eddy simulation; turbine blade cooling system; adiabatic film cooling effectiveness; bulk flow pulsation; triple cooling hole configuration
►▼ Show Figures 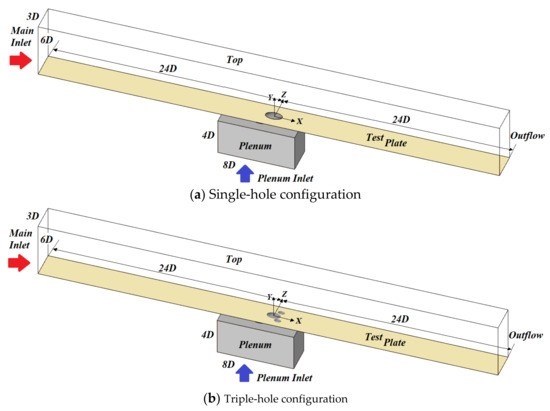