Figure 2 illustrates the geological conditions along the tunnel route, wherein Bukit Timah granite from fresh weathering grade G(I) to residual soil G(VI), a mixed face of soil and rock, and alluvial deposits of the Kallang formation exist. The Bukit Timah granite was generally composed of granitic rocks and various minority lithologies, including dolerite, diorite, basalt, dacite, and rhyolite. The depth of the tunnel alignment varied from 32.5 to 65 m. The tunnel centreline level was up to 62 to 65 m below ground level. The water table along the tunnel route was generally less than 5 m below ground level, indicating that the water pressure at tunnel level was very high, typically above 4 bar and exceeding 6 bar along some alignment sections. Table 1 lists a summary of the geomechanical characteristics of the Bukit Timah granite located at the project site. The weathering classification of the Bukit Timah granite, in accordance with BS 5930 [14], is shown in Table 2.
A 5.29 km long, single-tube tunnel was excavated using two slurry shield TBMs 6.9 m in diameter. A slurry shield TBM can be used to control and prevent the inflow of groundwater through the excavation face when appropriate pressure is applied. The slurry shield TBM was equipped with a 19 inch disc cutter, and equipped with a total of 48 cutter rings and a cutter spacing of 85 mm. Table 3 lists the TBM specifications, and Figure 3 shows photographs of the TBMs used for the project. The degree of disc cutter wear was measured during the cutterhead intervention. A total of 126 cutterhead interventions were conducted for TBM No. 1, which was used to excavate 2.64 km. For TBM No. 2, which was used to excavate 2.65 km, 125 cutterhead interventions were carried out. Figure 4 shows the measurement of disc cutter wear during the cutterhead interventions. The degree of wear was measured using a special ruler.
The disc cutter configurations of the cutterhead are depicted in Figure 5. Disc cutters C1–C8 were double-disc cutters mounted at the central area of the cutterhead, and the others were single-disc cutters. Disc cutters No. 14–No. 36, called face cutters, were mounted at the cutterhead face. Disc cutters No. 1–No. 13, called transition cutters, were installed at the edge of the cutterhead, located at the curved portion of the cutterhead. Disc cutters G1 and G2 are gage cutters and were mounted at the same radius of the cutterhead. Disc cutters OC1 and OC2 are over cutters and were installed at the outermost portion of the cutterhead. The over cutters were mainly used for excavation at the tightly curved radius sections to negotiate the planned alignment. The theoretical wear limit of the 19 inch disc cutter was 30 mm. In the project, the allowable wear limit was set to 15 mm for centre, gage, and over cutters, and 25 mm for the face and transition cutters.
A carbon steel pipe with a diameter, length, and thickness of 20.32 cm, 6 m, and 13 mm, respectively, was used as the slurry discharge pipe at the project site. The thickness of the pipes was measured every week using an ultrasonic thickness gauge at the base where the maximum wear occurred. The pipes were rotated by approximately 120° once the residual thickness of the pipe reached 6 mm to maximize the life cycle of the pipes; otherwise, the pipes were replaced. Measurements were recorded at three locations, i.e., at the front, middle, and rear of each pipe, based on the direction of the excavation. Figure 6 shows a site where the pipe thickness was measured and the location of the pipe measurement.
The slurry bentonite density ranged from 1.04 to 1.27 ton/m3 with an average value of 1.16 ton/m3, and the discharged material density varied from 1.14 to 1.29 ton/m3 with an average of 1.23 ton/m3.

The slurry discharge pipes were rotated or installed while the pipe thickness remained at an average of 6.2 mm based on the recorded data. The pipe installation or rotation periods lasted for 115 days on average.
The daily wear rate of the slurry discharge pipes was 0.055 ± 0.048 mm/day on average, ranging from a minimum value of 0.011 mm/day to a maximum value of 0.243 mm/day. The wear rate per excavated distance had an average value of 0.017 ± 0.016 mm/m, with minimum and maximum values of 0.002 and 0.087 mm/m, respectively.
Table 5 lists the average values of the wear rate per excavated distance for the slurry discharge pipes with respect to the weathering grade of the Bukit Timah granite. The wear rates in weathering grades G(I) to G(IV) of Bukit Timah granite were similar. The wear rates for weathering grade G(V) of Bukit Timah granite, which was entirely weathered, and those for the mixed zone were 1.5 times higher than those for weathering grades G(I) to G(IV) of Bukit Timah granite. As can be observed in Figure 6b, the thickness measurement was recorded at three locations: front, middle, and rear of each pipe. The average wear rate per excavation distance at each location was 0.017, 0.016, and 0.018 mm/m, for the front, middle, and rear, respectively. The difference in the wear rate with respect to measurement position within the same pipe was negligible.
Figure 10 shows the wear rate per excavated distance according to the position of the ring where the pipe thickness was measured. As the TBM was used to install the rings after excavation, increasing the ring number suggests that the rings are closer to the TBM. As shown in Figure 10, the wear rate closer to the TBM was generally higher. This higher wear rate indicates that rock chips (muck) became worn out as the moving path of the muck (including the rock chips) was greater, and the wear near the end of the pipe was less affected.

4.3. Relationship between the Wear Coefficient of Disc Cutters and the Wear Rate of Slurry Discharge Pipes

Writing—Original Draft Preparation, T.Y.K.; Writing—Review and Editing, S.S.L. All authors have read and agreed to the published version of the manuscript.

The research fund of Hanyang University (HY-201700000002431) supported this study, and the authors greatly appreciate the financial support.

The authors declare no conflict of interest. The funders had no role in the design of the study; in the collection, analyses, or interpretation of the data; in the writing of the manuscript; or in the decision to publish the results. 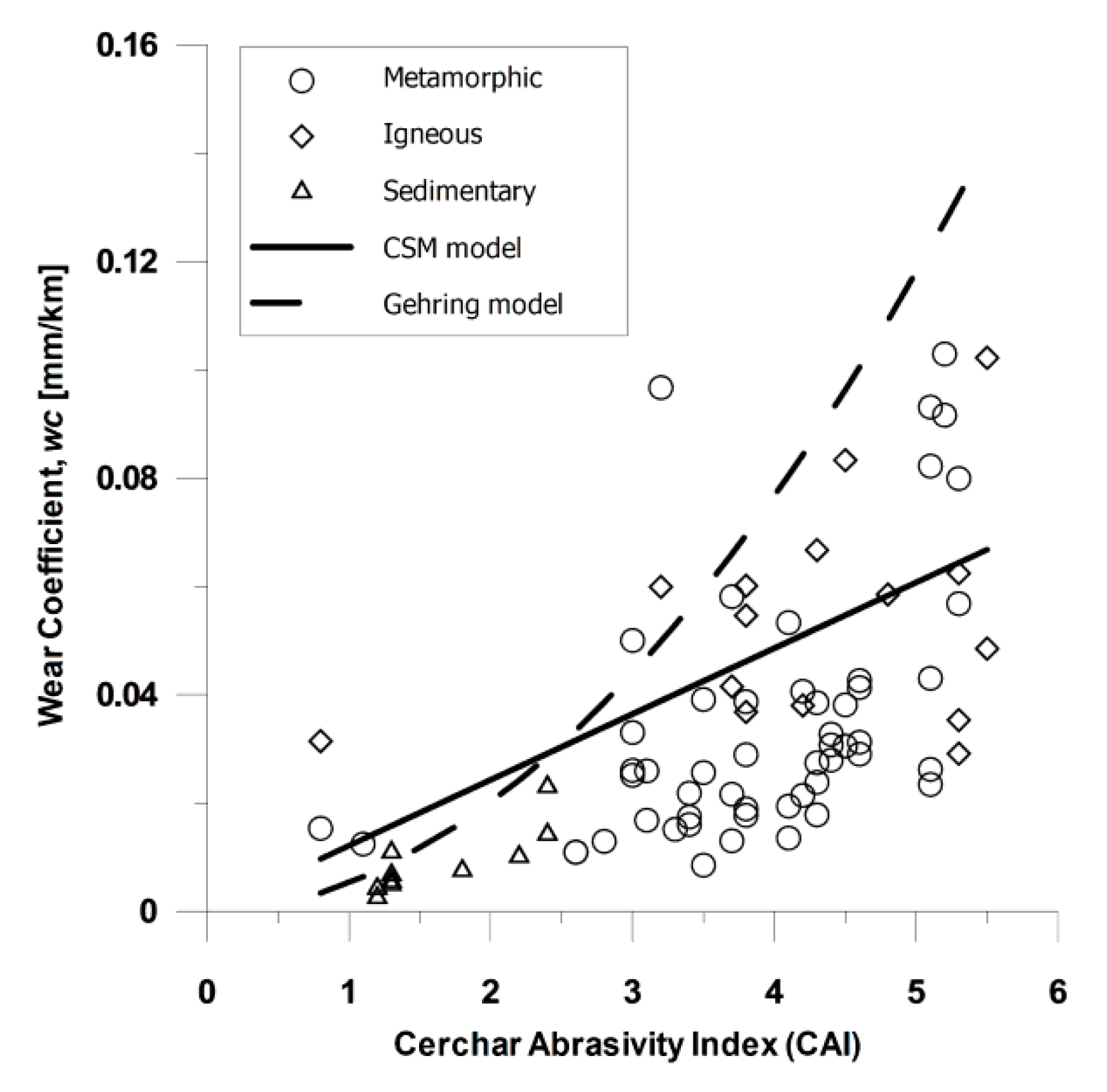 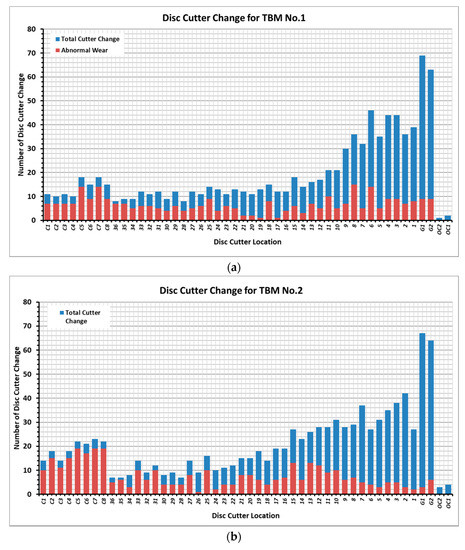 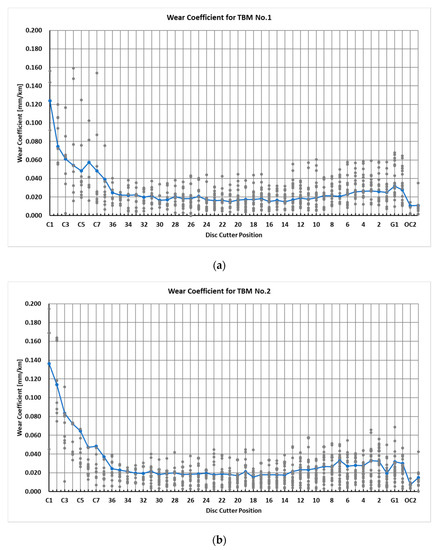 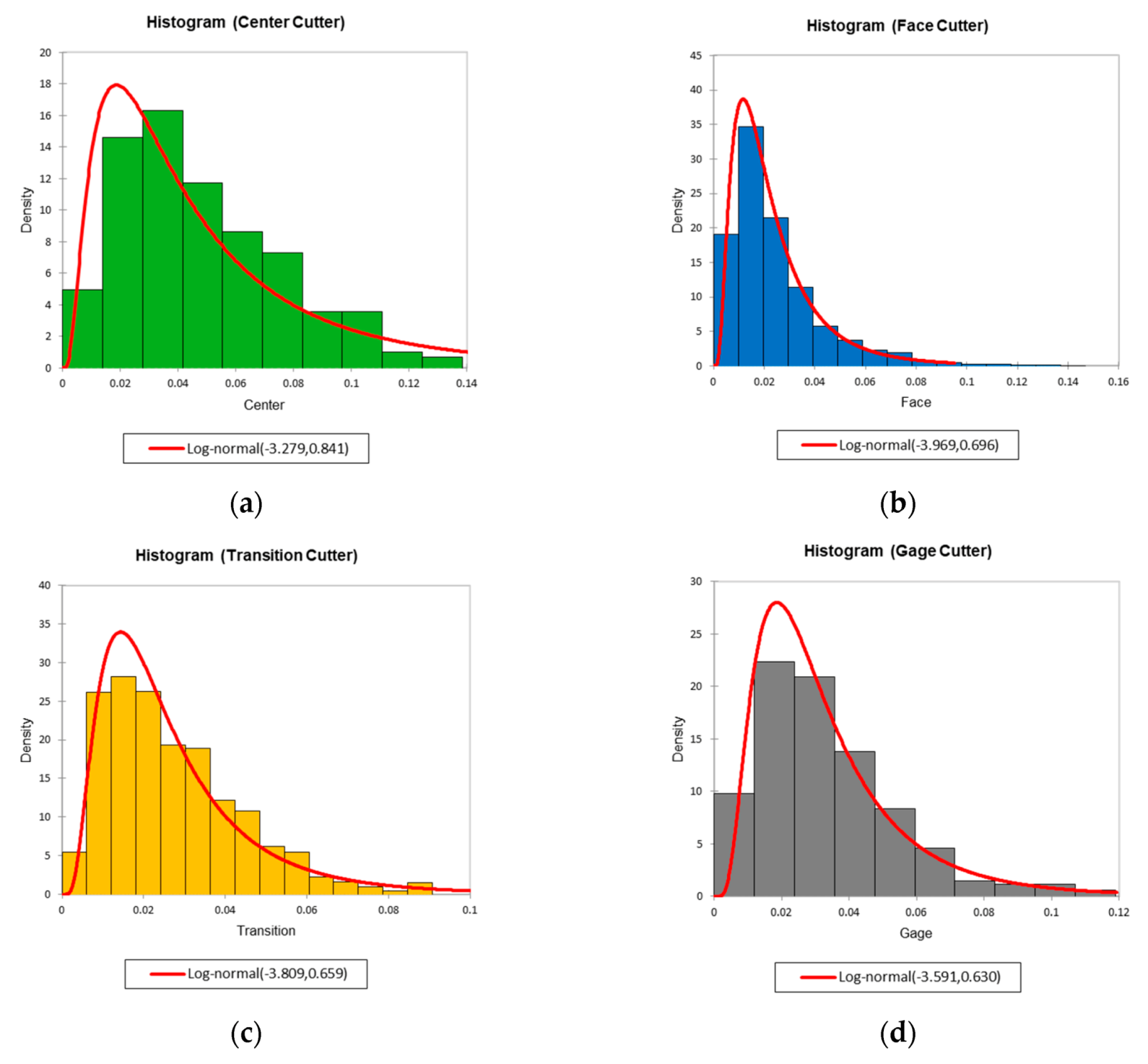 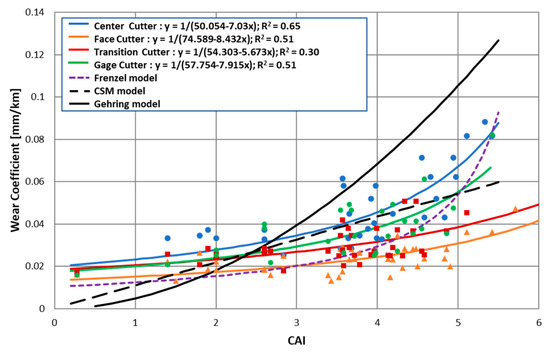 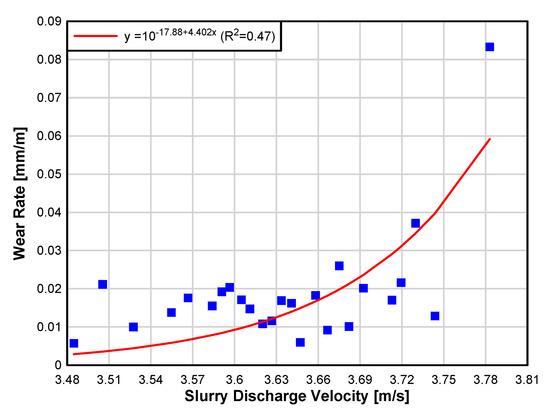