During the construction of the Sichuan–Tibet highway, many roadbed slopes were constructed via excavation and dumping. Several backfill slopes slide along the original surface of the Sichuan–Tibet Highway in the southwest Sichuan province of China. This area is mainly characterized by Silurian strata, comprising medium-thick-layered limestone intercalated with mudstone [1]. Anti-slide piles are used in this bedrock to maintain landslide stability [2]. The pile heads often undergo lateral displacement [3,4]. If the pile head deformation is too large, cracks form in the landslide body behind the pile, which provide a channel for surface water infiltration and increase the risk of landslides [5,6].
Many recent studies have investigated the mechanism of pile deformation. In foundation engineering, the deformation behavior of piles is related to the section shape and slenderness ratio of piles [6]. In landslide prevention and control projects, anti-slide piles play an important role and coordinate deformation with the surrounding soil to improve stability of the entire slope [7,8,9,10,11]. The deformation of the pile head in a slope is related to the slope angle [12,13]. The excavation and increasing driving force of landslides behind piles will lead to pile deformation and even pile damage [14,15,16]. The deflection of the pile head is affected by the lateral load pattern, and the rectangular lateral load pattern has a greater influence on the deflection of the pile head than the trapezoidal load pattern [17,18]. When the driving force of the landslide, stratum properties, and relative stiffness of the pile are determined, the embedded depth of the anti-slide pile will directly affect the internal force and displacement of the piles [19,20].
The effective embedded length of anti-slide piles used for reinforcing slopes is analyzed via numerical simulations, theoretical calculations and experimental modeling. Poulos [21] presented an approach for the design of piles to reinforce slopes. Guo and Qin [22] and Qin and Guo [23] conducted experimental investigation into the response of vertically loaded free head single piles subjected to lateral soil movement. Cai and Ugai [24] adopted an analytical method for calculating the response of flexible piles under the laterally linear movement of the sliding layer in landslides. Wei and Cheng [25] adopted strength reduction to study the reinforcement of a row of piles on a slope. Wei et al. [26] studied the way in which expansive power and embedded pile length affected the deformation of the pile in an expansive soil region. Yang et al. [27] studied the effect of the embedded pile length on the factors of safety and pile behavior. Liu and Liu [28] and Li et al. [29] investigated the effects of pile spacing and pile-head conditions on the critical pile length. As observed, the critical pile length increases with decreasing pile spacing. Bakri et al. [30] studied the minimum socketed length in the upper-middle region of the slope, the factor of safety remaining constant. Li et al. [31] and Zhou et al. [32] studied the mechanism of pile deformation in multilayered bedrock.
The above researchers have studied the mechanism of pile deformation with a single rock layer and investigated the influence of pile length on slope stability with a multilayered stratum. However, in backfill landslides with multilayer bedrock, studies on large horizontal displacements of piles after the implementation of anti-slide piles are limited. Such excessive displacements will affect the stability of the landslide. Hence, the interaction mechanism between the deformation behavior of anti-slide piles in multilayered bedrock, and the corresponding approaches to alleviate this deformation are crucial. Using the case of the Zhenzilin landslide in Luding county located at southwest of the Sichuan province in China, the objective of this study is to investigate possible factors influencing the pile deformation. Additionally, the study proposes a method for ascertaining the reasonable buried length of anti-slide piles to control pile-head deformation in backfill landslides. The factors affecting the reasonable embedded length of anti-slide piles, pile deformation, and internal forces have been accounted for via detailed analysis.

2.1. Geological Background of the Zhenzilin landslide

The Zhenzilin landslide occurred on July 23, 1998, in Luding county located at southwest of the Sichuan province of China. The incident occurred 800 m away from the west exit of the Erlangshan tunnel—a project concerning the construction of the Sichuan–Tibet highway [1]. The coordinates of the landslide location are 29.841397° N latitude and 102.264781° E longitude. It is about 172 km away from Chengdu. The Sichuan–Tibet Highway (G318 Road) passes in front of the landslide. There were about 50 officers and soldiers living in the landslide area. The toll station of Erlangshan Highway is threatened by the landslide (see Figure 1). The front edge of the landslide is eroded by water from the Heping river.
The Zhenzilin landslide is approximately 390 m long and 210 m wide, and the average thickness of the sliding body is 25 m. The landslide area is approximately 9.87 km2 and its volume is 2.1 million m3 (see Figure 2a). The main sliding direction of the sliding body is 187°. The Zhenzilin landslide is a landfill slope [2]. The landslide material mainly comprises artificial fill from the Erlangshan Tunnel construction. Silurian strata are the main characteristics of this area with the interbedding of limestone and mudstone. The tendency of limestone and mudstone is 40° and the dip angle is 55°.

Electronic Total Station displacement monitoring and site investigation were conducted to further study the deformation behavior of anti-slide piles. Several obvious cracks were discovered at the back edges of anti-slide piles during our site investigation of the Zhenzilin landslide. The widest crack was approximately 13 cm (see Figure 3), which is consistent with the monitoring results of the pile head by the Electronic Total Station. The cracks in the landslide body would provide channels for surface water seeping into the ground [5], which would weaken the strength of mudstone below the slip surface and increase the landslide risk. Consequently, the causes of the deformation of the anti-slide pile require further study to guide the design of anti-slide piles in similar bedrock areas.
Following the landslide treatment, the highway toll station and four-story dormitories were built on the landslide. According to the load design code, an extra 50-kN/m load was imposed on the anti-slide piles.

2.4. Laboratory Test of Sandstone and Mudstone

A site investigation area (H) located at the rear edge of the Zhenzilin landslide with a steep cliff in the Silurian strata was studied. To further study the physical and mechanical properties of bedrock, some rock samples were obtained and tested in the laboratory (see Figure 4). The experimental results pertaining to geotechnical parameters are listed in Table 1. Rocks at the investigation site in this study show similar characteristics to those of the Zhenzilin landslide bedrock.
Laboratory compressive strength tests were conducted to determine the modulus of subgrade reaction of the bedrock. The compressive strength test device system was developed based on the rock test code of highway engineering [34,35]. The results of the laboratory compressive test show that the compressive strengths of the moderately weathered mudstone and weathered limestone were 12.4 MPa and 38.59 MPa, respectively. The corresponding modulus of subgrade reaction were 1 × 105 kN/m3 and 3.4 × 105 kN/m3, according to a study on the design of an anti-slide pile [36].

3.1. Methods for Anti-Slide Pile Calculations in Two Bedrocks with Different Strengths below the Slip Surface

3.2. Calculation Method for an Anti-Slide Pile above the Slip Surface

3.3. Validation of the Calculation Method for the Zhenzilin landslide

The behavior of the anti-slide piles to increase landslide stability is affected by many factors. The first layer rock under the sliding surface is affected by the overlying layer conditions of the landslide [5]. The thickness of the first weak rock is one of the main factors influencing pile head deformation. The modulus of subgrade reaction of the first weak bedrock also affects the deformation of anti-slide piles. Therefore, these factors should be analyzed for controlling the deformation of anti-slide piles set in multilayer strata. The calculation model of anti-slide piles is established in Figure 5a. This calculation model simplifies the thrust of the landslide into a triangular load acting on the pile above the sliding surface, and the pile behind the sliding surface set into rock layers of different strengths.
The basic parameters of the pile in the calculation were the same as those of the A-type pile in the Zhenzilin landslide. The length of the A-type pile was approximately 23.5 m, with the cross-sectional (from A to A′) width (b) of 2 m and the cross-sectional height (a) of 3 m. The driving force of the Zhenzilin landslide (p) was 1550 kN/m in the cross-section from A to A′. The thicknesses of the second hard rock (Δy2) was 7.5 m. The modulus of subgrade reaction of the second hard rock (k2) was 1.7 × 105 kPa/m. The thickness of the first weak rock (Δy1) were varied as 0.5, 1, 1.5, 2, and 2.5 m, and the corresponding embedded lengths of a pile (h) were 8, 8.5, 9, 9.5, and 10 m; the corresponding modulus of subgrade reaction of the upper weak bedrock (k1) were 0.7 × 105, 1.0 × 105, and 1.3 × 105 kPa/m. All factors influencing the parameters are listed in Table 2.

4.2. Effect of Thickness of First Weak Bedrock on the Displacement and Internal Force of the Piles

The thicknesses of the first weak rock (Δy1) were 0.5, 1, 1.5, 2, and 2.5 m, and the corresponding thicknesses of the second hard bedrock (Δy2) were 8, 7.5, 7, 6.5, and 6 m, while maintaining the slide layer depth at 15 m and pile embedded length of 8.5 m in the calculation. Other parameters are shown in Table 2. Using the above approach, shear force, bending moment, and the displacement of a pile were determined and plotted in Figure 7.
With the embedded length of the anti-slide pile maintained at 8.5 m, the horizontal displacement of the pile head increases with the increase of the thickness of the first layer of weak rock below the sliding surface. The pile exhibits a combined flexural and rotational deflection shape with the pile toe kicking out. Two local maximum shear forces were noted at the slip surface and in the embedded bedrock. Similar behavior was obtained in experimental study of piles subjected to soil movement [22,23]. They are called the maximum positive shear force and maximum negative shear force in the following discussion. As expected, the maximum positive shear force of the pile remains unchanged at the slip surface, however, the maximum negative shear forces increase with increasing thickness of the first weak bedrock. The bending moment of the pile increases first and then decreases. The depth at which the maximum bending moment takes place is approximately 2 m below the slip surface. The behavior of the pile will be discussed further later.

4.3. Effect of the Modulus of Subgrade Reaction for the First Weak Bedrock on the Reasonable Embedded Length

5.1. Effect of the thickness of Lower Bedrock on the Deformation and Internal Forces of the Pile

5.2. Effect of Subgrade Reaction Modulus of First Weak Bedrock on the Deformation and Internal Forces of Pile

5.3. Effect of The Embedded Length on the Deformation and Internal Forces of the Pile

All authors thank the anonymous reviewers and the editor for the constructive comments on the earlier version of the manuscript. 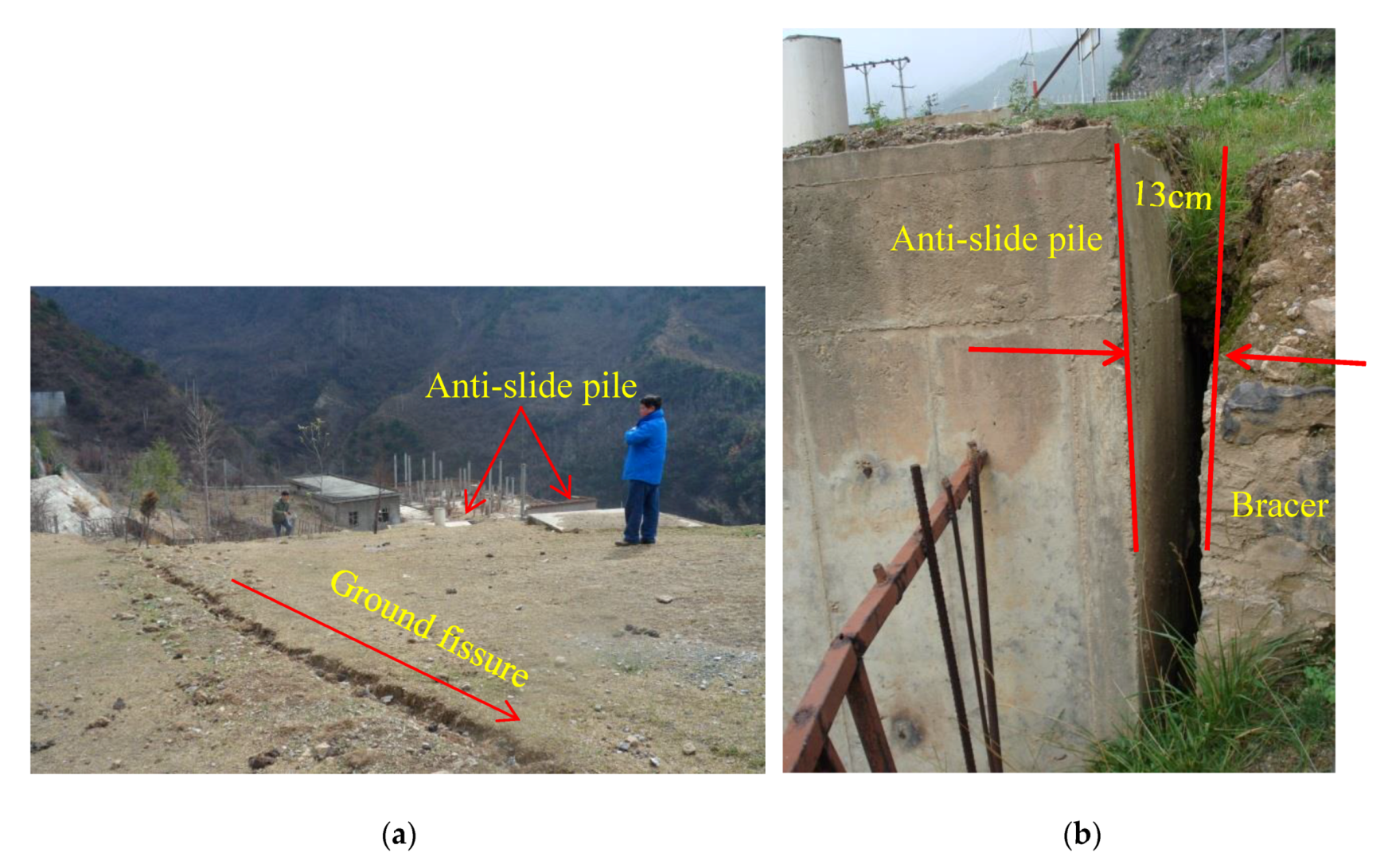 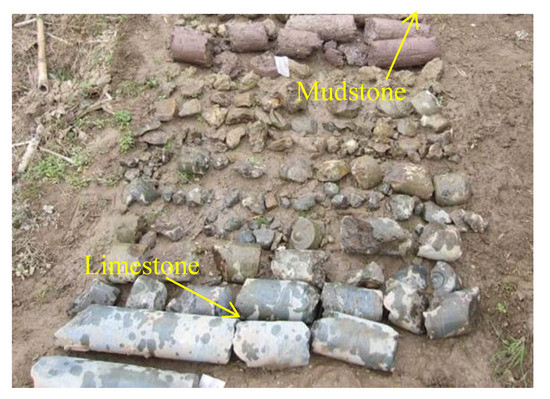 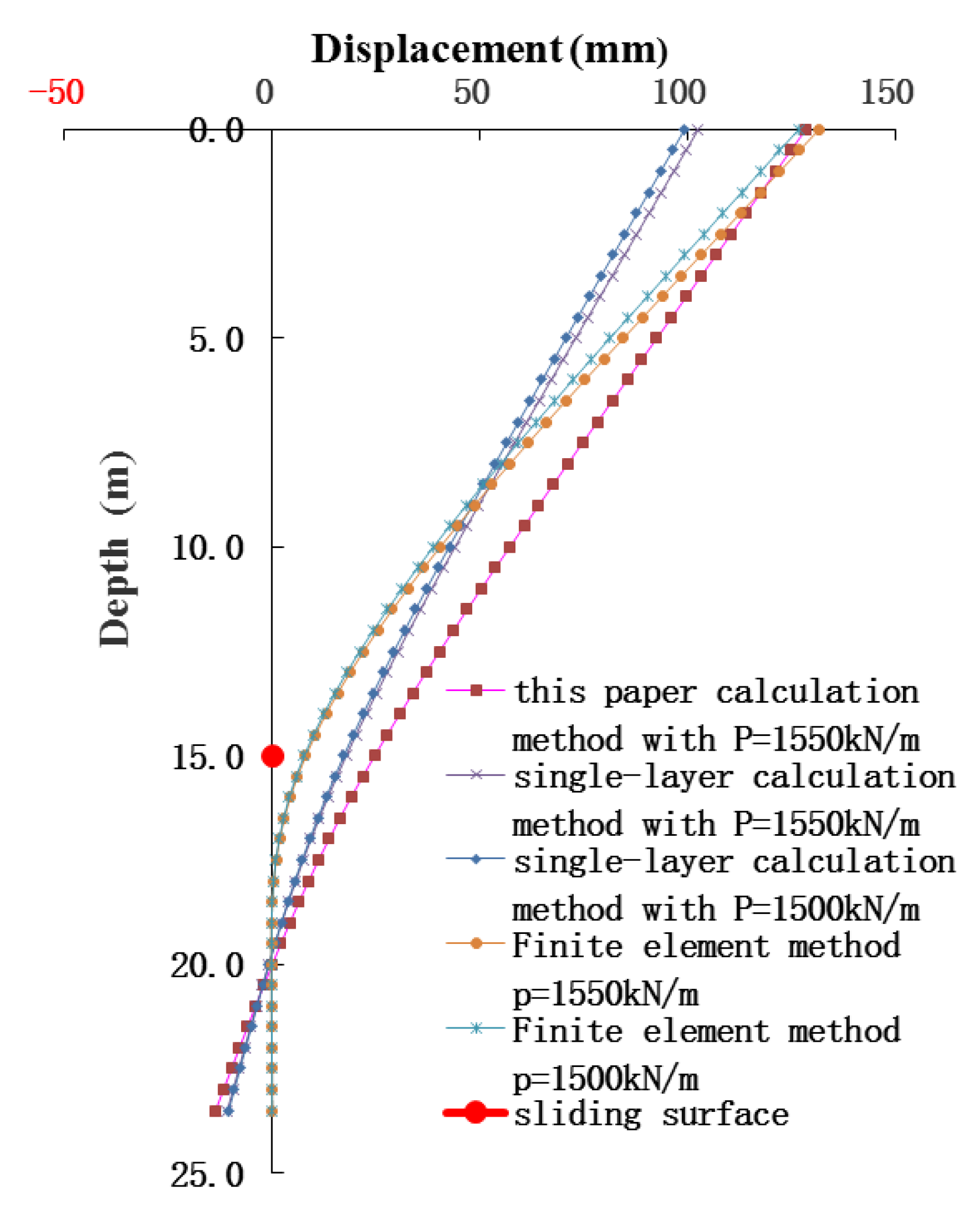 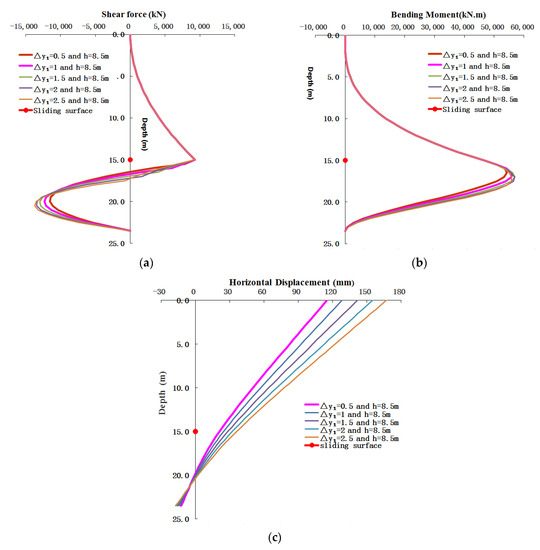 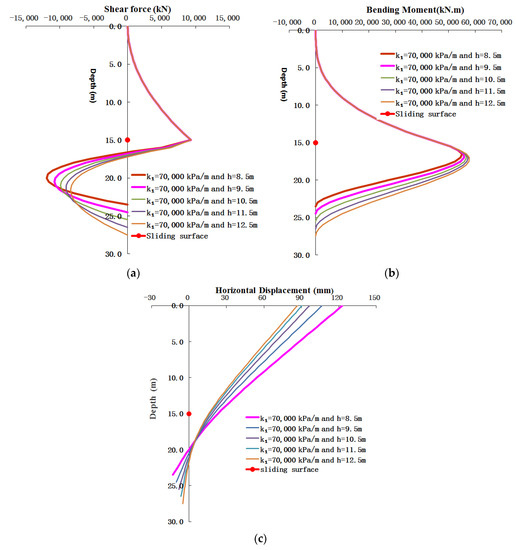