The electromagnetic spectrum includes the frequency range (spectrum) of electromagnetic radiation and its corresponding wavelength and energy. Due to the unique properties of different frequency ranges of the electromagnetic spectrum, a series of functional devices working in each frequency rang have been proposed. Here, we propose a periodic subwavelength hoof-shaped structure array, which contains a variety of geometric configurations, including U-shaped and rectangle structures. The results show that the enhanced optical transmission (EOT) effect of the surface plasmon excited by the hoof-shaped structure is highly sensitive to the polarization of the incident light, which leads to the peak’s location shift and the amplitude intensity variety of transmission peaks of U-shaped structure in the case of coupling based on the surface plasmon of rectangle structure. In addition, take advantage of the EOT effect realized in the periodic hoof-shaped structure array, we propose a multifunctional plasmon optical device in the infrared range. By adjusting the polarization angle of the incident light, the functions of the optical splitter in the near-infrared range and the optical switch in the mid-infrared range are realized. Moreover, with the changes of the polarization angle, different proportions of optical intensities split are realized. The device has theoretically confirmed the feasibility of designing multifunctional integrated devices through a hoof-shaped-based metamaterial nanostructure, which provides a broad prospect for the extensive use of multiple physical mechanisms in the future to achieve numerous functions in simple nanostructures.
Keywords: plasmonic optical device; enhanced optical transmission; interaction between light and metallic film; coupled mode theory plasmonic optical device; enhanced optical transmission; interaction between light and metallic film; coupled mode theory

Surface plasmons (SP) include surface plasmon polaritons (SPPs) and local surface plasmons (LSP), which are surface electromagnetic waves formed by the collective oscillation of free electrons in a metal and the incident light field [1,2,3]. In recent years, the enhanced optical transmission (EOT) effect brought by metal-based surface plasmons has been applied in different wavelengths, including visible light, near-infrared and infrared ranges. Correspondingly, a large number of micro/nano structures have been proposed, such as: circle holes [4], stripe grating hole [5], single/double aperture hole [6], composite structure [7], cross-shaped hole [8], triangular hole [9]; Also, a large number of devices and applications have been constructed, for example: A absorber device that realizes broadband multifunctional properties by introducing vanadium dioxide into a metamaterial [10]; A filter device that realizes multiple channels working simultaneously by changing the number of concentric apertures [11]; A color sensor was realized using interference effects in the metal-insulator-metal Fabry-Perot (FP) cavity of polydimethylsiloxane (PDMS) as the dielectric layer [12]; The function of displaying different colors in the visible light range is realized by changing the material characteristics and the geometric parameters of the structure, in order to achieve the application of the structure color [13,14,15,16,17,18,19]. However, the devices proposed by researchers have the defects of single function, complex structure and expensive materials; they cannot achieve better performance when the devices are integrated.
In this paper, the photoelectric effect of the polarization direction of the incident light on the periodic hoof-shaped subwavelength structure array is studied by numerical simulation. The results show that as the polarization angle of incident light changes, the transmission peak splits in the near-infrared range, and a new transmission peak appears in the mid-infrared range. By comparing the EOT phenomenon of three structures, it is found that in the hoof-shaped structure, the LSP resonance modes excited by the U-shaped and rectangle portions, respectively, are different from those when they exist alone.
Finally, we propose a multifunctional device work on different wave ranges with adjustable performance. By changing the polarization angle of the incident light, a mid-infrared range plasmonic optical switch with a contrast ratio exceeding 13.2 dB can be realized. Not only that, the device implements a plasmonic optical splitter in the near-infrared range, which can achieve optical splitting functions with different intensities.

Figure 1 is a cross-sectional diagram of periodic hoof-shaped structure arrays and a unit cross-sectional diagram, where the gray part is quartz substrate and the blue part is silver (Ag). Px and Py present the arrays periods along X and Y axes, respectively. The silver film thickness is 50 nm, which is placed on a quartz substrate with a thickness of 225 nm. The incident light (Gauss light source), the center wavelength is 1550 nm and the pulse width is 5 fs, is incident perpendicularly from one side of the substrate. Based on the 3D-FDTD method, we use MATLAB software to simulate the propagation of light in periodic subwavelength metal holes [20,21]. In order to ensure the accuracy of simulation, we set the step size in X, Y, Z direction to 5 nm. The EOT of subwavelength hole arrays in metal film can be characterized by the transmittance T as following [22]: T = Pout(λ)/Pin(λ), where Pin(out) is power flux through the metal film.

Based on the polarization sensitivity that causes the transmission peak to split in the near-infrared range, we constructed a plasmonic optical splitter in the near-infrared range with parameters shown in Figure 1b. As shown in Figure 2b, we deem that the center wavelengths of two different transmission peaks in the near-infrared range of the plasmonic optical splitter (PO splitter) are the working wavelengths of the corresponding channels of the PO splitter. At the same time, the intensity splitting ratio (ISR) as a performance index to quantitatively describe the spectroscopic effect of the PO splitter can be defined as [34]: where the Tmax represents the EOT peak at the central wavelength when the PO splitter is in working state and subscripts 1 and 2 are the channels of PO splitter 1 and 2, respectively.
As shown in Figure 6, we change the angle θ of the incident light. The parameters are as follows: the polarization angle θ is 0, 10, 20, 30, 40, 50, 60, 70, 80 and 90; other parameters remain unchanged. In this figure, the green dot patterns are the transmittance of channel 1, which decrease with the augment of angle θ; The red dot patterns are the transmittance of channel 2, which increase with the augment of angle θ. Obviously, the transmittance of the two channels is almost equal at θ is 40. That is to say, the average intensity can be achieved. More important, the POS (splitter) can achieve the controllable function of the device by changing the angle θ to control the transmittance of two channels. 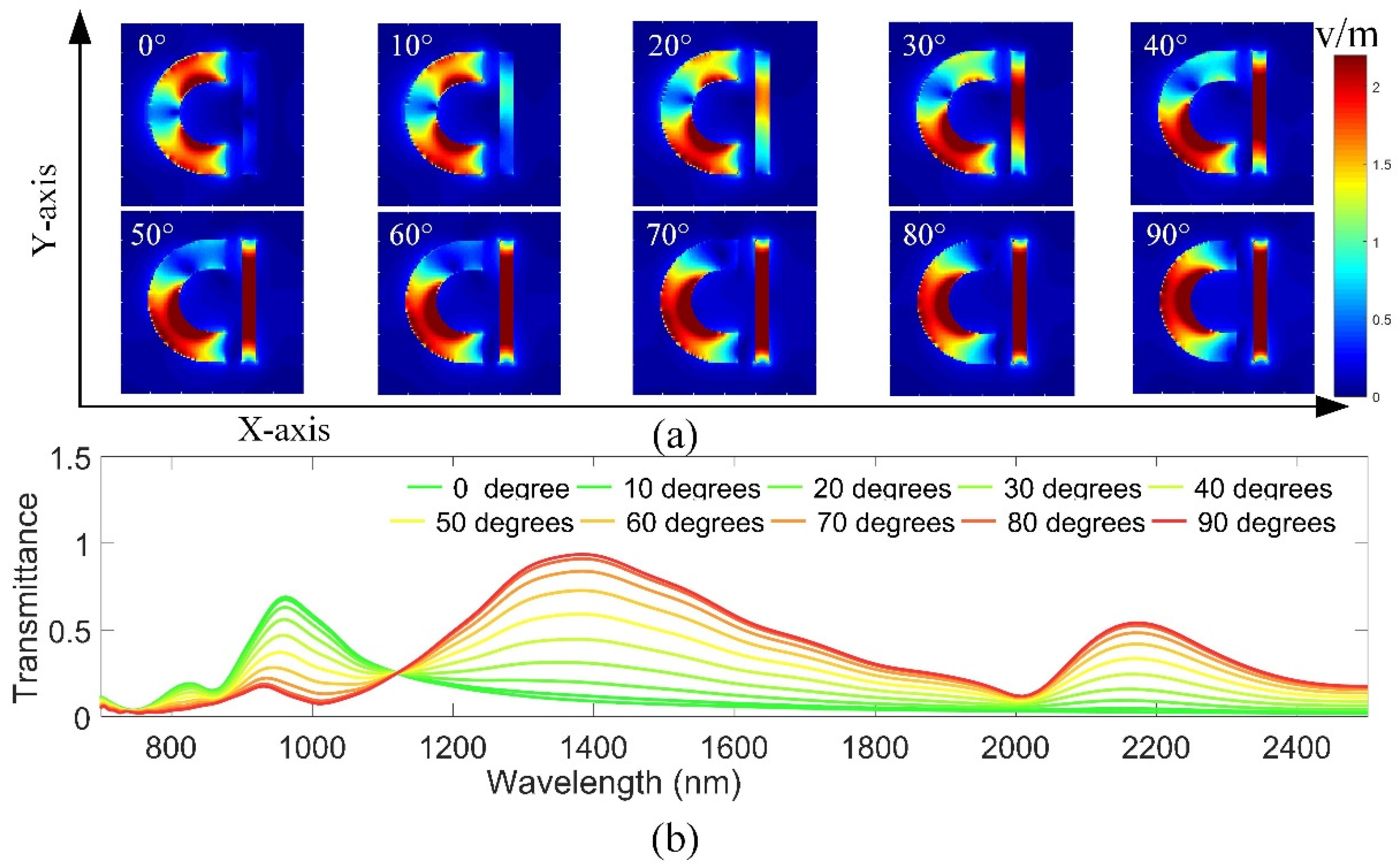