Roughly 65% of the African continent is classified as savanna. Such regions are of critical importance given their high levels of biological productivity, role in the carbon cycle, structural differences, and support of large human populations. Across southern Africa there are 79 national parks within savanna landscapes. Understanding trends and factors of vegetation health in these parks is critical for proper management and sustainability. This research strives to understand factors and trends in vegetation health from 2000 to 2016 in and around the 79 national parks across southern Africa. A backward stepwise regression was used to understand the factors (e.g., precipitation, population density, and presence of transfrontier conservation areas) affecting the normalized difference vegetation index (NDVI) during the 21st century. There was a statistically significant positive (p < 0.05) relationship between mean annual precipitation and NDVI, and a significant negative relationship between population density and NDVI. To monitor vegetation trends in and around the parks, directional persistence, a seasonal NDVI time series-based trend analysis, was used. Directional persistence is the net accumulation of directional change in NDVI over time in a given period relative to a fixed benchmarked period. Parks and buffer zones across size classes were compared to examine differences in vegetation health. There was an overwhelmingly positive trend throughout. Additionally, national parks, overall, had higher amounts of positive persistence and lower amounts of negative persistence than the surrounding buffer zones. Having higher positive persistence inside of parks indicates that they are functioning favorably relative to the buffer zones in terms of vegetation resilience. This is an important finding for park managers and conservation overall in Southern Africa. View Full-Text
Keywords: remote sensing; vegetation dynamics; savanna landscapes; national parks; conservation remote sensing; vegetation dynamics; savanna landscapes; national parks; conservation
►▼ Show Figures 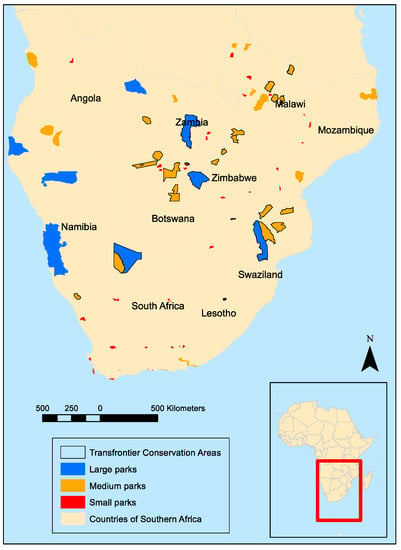