Smallholder farmers in semi-arid areas depend on both cropping and livestock as the main sources of livelihoods. Rangeland productivity varies on both spatial and temporal scales and provides the major source of feed for livestock. Rangeland productivity is expected to decline with climate change thereby reducing livestock feed availability and consequently livelihoods that depend on livestock. This study was carried out to assess the impacts of climate change on rangeland productivity and consequently livestock population dynamics using a 30-year simulation modeling approach. The climate scenarios used in the simulations are built from the localized predictions by General Circulation Models (GCMs). The primary climate variables under consideration are rainfall (+/−7% change), carbon dioxide (CO2 up to 650 ppm) and temperature (+4 °C change). This was done by applying the SAVANNA ecosystem model which simulates rangeland processes and demographic responses of herbivores on a temporal and spatial scale using a weekly internal time step and monthly spatial and temporal outputs. The results show that rainfall levels of less than 600 mm/year have the largest negative effect on herbaceous biomass production. The amount of biomass from the woody layer does not change much during the year. The carbon dioxide (CO2) effects are more influential on the tree and shrub layers (C3 plants) than the herbaceous layer (C4 grasses). The CO2 effect was more dominant than the effects of rainfall and temperature. In the baseline simulations, the shrub plant layer increased significantly over 30 years while there is a three-fold increase in the woody plant layer (trees and shrubs) where biomass increased from a 1980 production to that of 2010. The biomass of the herbaceous layer was stable over the historical period (1980 to 2010) with values fluctuating between 200 and 400 g/m2. Grass green biomass has a variable distribution where most production occurred in the fields and cleared areas while lower levels of production were found in the forested areas. The spatial distribution of shrub green biomass was less directly linked to yearly rainfall. Shrub biomass was mostly found in forested areas, and it showed a steady increase in production. Cattle, donkey, and goat populations rose slowly from 1980 but the rise was disrupted by a dry period during the late 1980s to the early 1990s causing a decline in all populations primarily due to grass unavailability. The populations of cattle goats and donkeys started to rise again from 1995 onwards due to improvements in rainfall. Cattle and donkey populations were rising faster than that of goats while sheep population was not changing much for most of the simulation period, otherwise they declined significantly during the drought of 2002. Similar changes in simulated grass biomass (g/m2) were observed in almost all climate scenarios, except for the peak and low years. The livestock population simulation showed few variations in livestock population under all scenarios. The main conclusion from the study is that CO2 effects on rangeland productivity are much more dominant than the localized effects of rainfall and temperature. This has implications of favoring the growth of the tree and shrub layers over herbaceous layer, which meant that in the long run, the species that are able to use tree and shrub layers may be kept as a livelihood source as they will have a feed source. View Full-Text
Keywords: climate change; SAVANNA; simulation; scenarios; livestock; rangeland productivity; CO2 effects climate change; SAVANNA; simulation; scenarios; livestock; rangeland productivity; CO2 effects
►▼ Show Figures 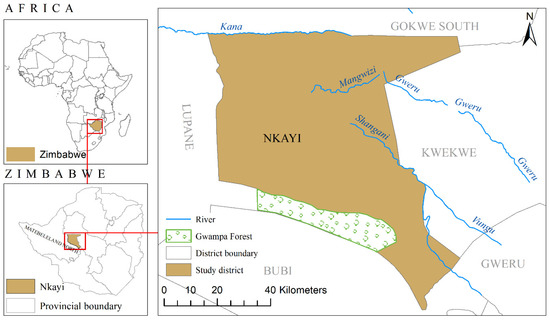