2.1. Configuration of the Birdcage RF Coil

The line diagram of a conventional N-segments birdcage RF coil structure and the block diagram for its equivalent circuit model are shown in the Figure 1.
A conventional birdcage RF is a three-dimensional cylindrical structure which is composed of N (even) number of segments which are connected to each other and are precisely arranged in the axial and azimuthal plans as shown in Figure 1a. The axial element of a segment is known as leg (or rung) which is connected to the conductor segments known as end-ring on both sides in the azimuthal planes. Each segment of a birdcage RF coil contains identical legs with impedance Zl and identical end-rings with impedance Zer as shown in Figure 1b. The impedances Zl and Zer are composed of inductive and capacitive elements with negligible resistance (practically less than 1 ohm). The inductive elements of a segment can be the cylindrical wires or the rectangular conductors (of finite thickness or thin foils). These are arranged in the axial and azimuthal planes. The capacitive elements in a segment are the lumped capacitors (with non-magnetic characteristics) which can be inserted in its leg or/and end-rings. Based on the capacitor position in a segment, three configurations of the birdcage RF coil can be realized. These are known as low pass (LP), high pass (HP), and band pass (BP) [14]. A single segment of each configuration is shown in Figure 2.
Due to circular ladder structure with multiple cascaded identical segments, there does exist multiple resonance frequencies (some time referred as resonance modes) simultaneously in a conventional birdcage RF coil. The total number of these resonance frequencies mainly depend upon the number of legs (N), the inductances of leg (L1) and end-ring segment (L2), and the lumped capacitance in the leg (C1) and in the end-ring segment (C2). The first generalized analytic solution to determine the m possible resonance frequency modes (fm) of an N leg birdcage RF coil was developed by Hayes C.E. in 1985 with the aid of its equivalent circuit analysis is given in Equation (1) [14].
The above equation is although for a band pass configuration which however can be converted for low pass and high pass configurations by removing the terms containing C1 and C2 respectively. The numerical values of all possible resonance frequency modes of a birdcage coil obtained using Equation (1) are approximate as the terms L1 and L2 in Equation (1) represents the self-inductances of leg and end-ring segments. A more accurate but rather complex solution was provided by Jiaming J. in 1991 who also included the mutual inductance effect in the calculations of L1 and L2 [23].

3. Design and Analysis of the Birdcage RF Coil

3.1. Design Based on Analytical Solution

Birdcage RF coils are designed in various sizes with respect to their length and diameter in according with the specified applications. The main tasks in the designing of a birdcage RF coil is the choice of coil configurations, number of legs, dimensions of legs and end-ring segments, lumped capacitance, and port impedance matching at desired resonance frequency. Legs and end-ring segments conductors are the sources of inductance in the birdcage coil. Their count and dimensions are the controlling factors of the magnetic field homogeneity as well as SAR inside the coil. While on the other hand, the lumped capacitors are responsible for producing the resonance at required radio frequency without effecting the magnetic field distribution. A balance between the conductor size and lumped capacitance value is quite necessary for an appropriate design of the birdcage RF coil. In order to validate the proposed analytical technique, we designed the low pass, high pass and band pass configurations of the linearly polarized birdcage RF coil for 1H NMR imaging in small volume applications at 1.5 T and 3 T MRI systems as shown in Figure 7.
The designed birdcage RF coils are linearly polarized having 8 legs and 2 end-rings which are made of 35 µm thick and 5 mm wide rectangular copper strips etched on a flexible FR4 substrate (εr = 4.4) of 0.2 mm thickness. A 2 mm gap is created in the respective conductor segments of the legs and/or end-rings for SMT lumped capacitors. Total length of a single leg of the birdcage RF coil including capacitor gap is 162 mm. In order to keep the permanent 3D symmetry, the birdcage conductor pattern etched flexible FR4 was further attached on a solid acryl (εr = 3.2) cylinder of 5 mm thickness and 40 mm internal diameter. The length and diameter of the coil along with the dimension of the legs and end-rings segments are assumed to be constant for all three configurations of the 1.5 T and 3 T birdcage RF coils.
The self-inductance (referred as calculated inductance Lcal in this paper) of the leg and end-rings segments which is constant for all designed coils is determined using Equation (6). However, in the actual scenario there also exist very strong mutual inductance between the parallel conductor segments of the birdcage RF coil which affects the self-inductances of the coil. The self-inductance of the leg and end-ring segment which includes the effect of mutual-inductance was computed using the methods described by the birdcage builder [25]. This self-inductance is referred as effective inductance Leff in this paper. For the given dimensions of the birdcage RF coil the inductance Lcal and Leff for the leg and end-ring segment respectively are given in the Table 1 below.
These calculated and effective inductance values were further used to compute the lumped capacitances required in the legs and/or end-rings for all three configurations of the birdcage RF coil at the desired frequencies of 63.8 MHz and 127.7 MHz (for 1.5 T and 3 T MRI systems respectively) by using the Equations (7)–(9). In order to prove the validity of the proposed method, we also computed the lumped capacitances for all three configurations by using the conventional method described by Equation (1), 2D circuit simulation and 3D electromagnetic simulation. The actual values of the lumped capacitance used in the implementation of the prototypes of low pass, high pass and band pass configurations of 1.5 T and 3 T birdcage RF coils were also measured. A comparison among lumped capacitor values determined through different techniques for 1.5 T and 3 T birdcage coils are given below in the Table 2 and Table 3 respectively.
The comparison provided in above Table 2 and Table 3 concludes that the numerical technique does only provide an approximate value of the lumped capacitor which is quite close to the actual value that is deployed in the prototype implementation. The measured capacitance value for the desired dominant resonance frequency is obtained by slightly tuning the numerically obtained capacitance. It is evident from the information provided in Table 2 and Table 3 that in comparison to the conventional methods, the effective lumped capacitance obtained through the proposed method exhibits least numerical error and requires lesser tuning to meet the desired resonance condition. Furthermore, the proposed analytic method described in this paper is quite simple and it does not require the hit and try method for capacitance computation which is commonly adopted in conventioanl 3D EM simulations. The results obtained through such analytical technique can directly be used in the coil implementation engineering which also includes the impedance matching operation at the desired resonance frequency.

The proposed analytical solution given in Section 1 does also provide the information about the resonance frequency modes for all three configurations (low pass, high pass and band pass) of the birdcage RF coil by plotting its input impedance ZER_p against frequency. We assumed the case where the receiver port is connected across the half end-ring segment and then determined the resonance frequencies spectrum of all three coil configurations using Equation (21). The effective inductance values of the leg and end-ring segments along with their corresponding effective capacitance values (with respect to the coil configuration) were used to compute the impedances Zl and Zer. A comparison between the input impedance obtained though the analytical solution proposed in this paper and the input impedance plot obtained through 2D circuit simulation with effective inductance and their corresponding capacitance values in ANSYS [26] for each configuration of 1.5 T and 3 T birdcage RF coils are given in the Figure 8 below.

It can be observed in all cases of Figure 8 that the pattern of variations in the input impedance (at the dominant resonance mode as well as the higher order resonance modes) provided by the proposed analytical solution does perfectly coincide with the one which was obtained using conventional 2D circuit simulation technique. The numerical values of the input impedance Zin at the desired resonance frequency is further used to design the impedance matching circuit which serves as an interface between the RF coil and receiver circuit. A conventional “L-matching” network with lumped (series) inductance and (parallel) capacitance can be used to accomplish this task. The input impedance Zin serves as the load impedance which is used to obtain the required values of the lumped components of the impedance matching network connected between the desired segment (end-ring in this case) of the birdcage RF coil and the 50 ohm port of the receiver. The numerical values of the input impedance ZER_p as obtained via proposed analytical solution along with the corresponding values of the lumped components of the matching circuit for all configurations of the designed 1.5 T and 3 T birdcage RF coils are provided in the Table 4.
The reflection coefficient S11 which is a core parameter to explains the impedance matching of an RF circuit can easily be determined with the help of input impedance by using the following Equation (23).
A comparison between the reflection coefficients obtained by using the proposed analytical solution in the absence as well as presence of the impedance matching circuit for all configurations of the implemented 1.5 T and 3 T birdcage RF coils is provided in Figure 9.

Homogeneity of the magnetic field at the desired dominant resonance frequency (63.8 MHz for 1.5 T and 127.7 MHz for 3 T) everywhere inside the designed birdcage coils using the proposed analytical solution can be observed via 3D electromagnetic simulation. The simulation models of the birdcage RF coils were created in according with the dimensional information provided in Section 3.1 using 3D electromagnetic simulation software ANSYS HFSS [26]. The magnetic field distribution inside the coil under no load conditions (assuming air inside the coil) as determined in the transverse plans at different positions for each coil configuration is shown in Figure 10 below.
It can be observed in Figure 10 above that each coil configuration causes quite homogeneous magnetic field distribution at the dominant resonance frequency while the bandpass configuration produces rather strong magnetic field than others for both 1.5 T and 3 T cases.

S.F.A. and H.D.K. conceived the idea, developed the analytical solution and carried out simulations. Y.C.K. designed the coils completed the experiments. B.-J.Y. developed the programming code for the implementation of the proposed analytical solution. H.D.K. analyzed the data and S.F.A. wrote the paper. All authors have read and agreed to the published version of the manuscript.

This research was financially supported by the Ministry of Trade, Industry, and Energy (MOTIE), Korea, under the “Regional industry based organization support program” (reference number R0004072) and the BK21 Plus project funded by the Ministry of Education (21A20131600011). 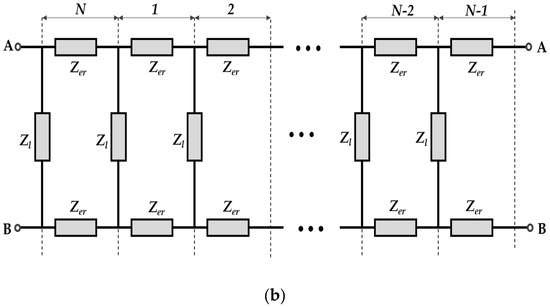 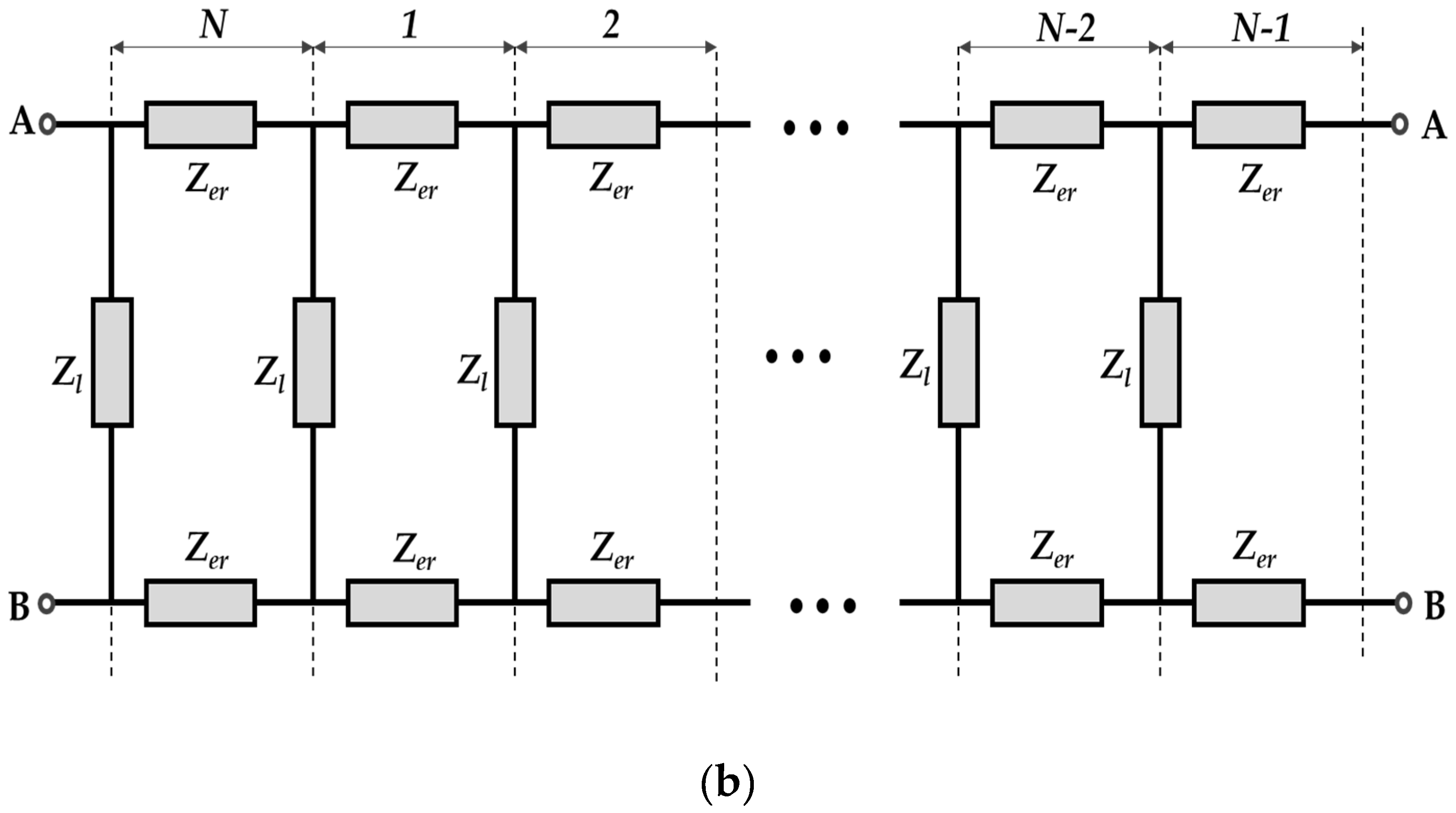 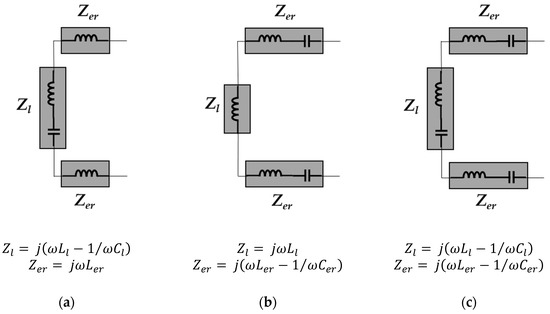 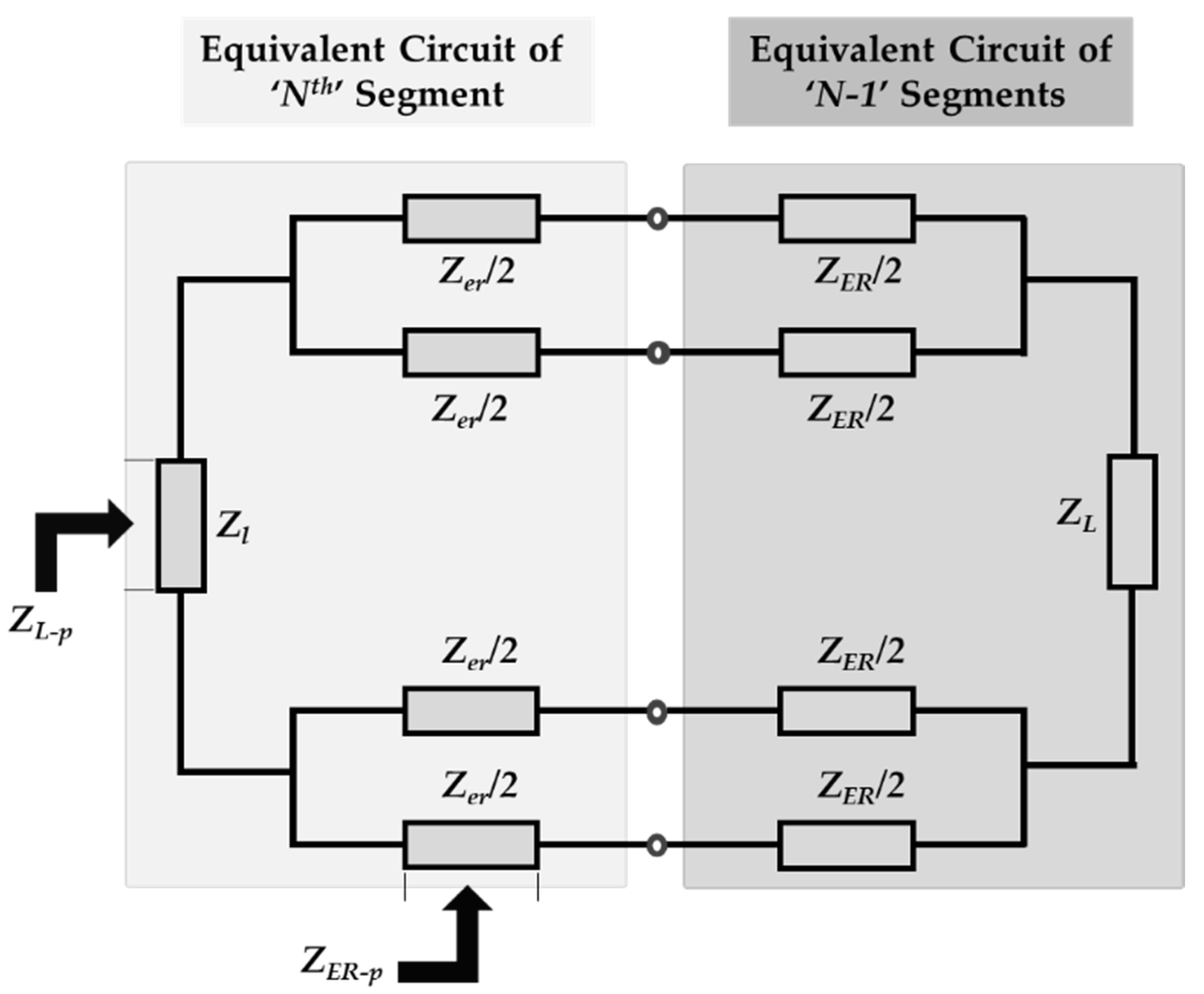 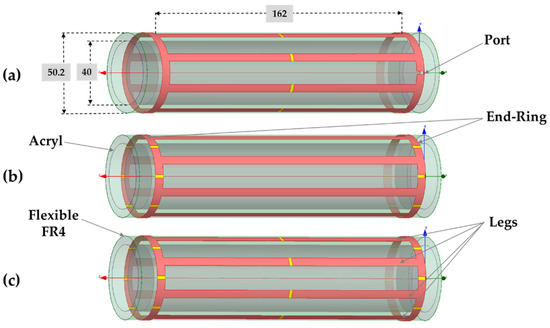 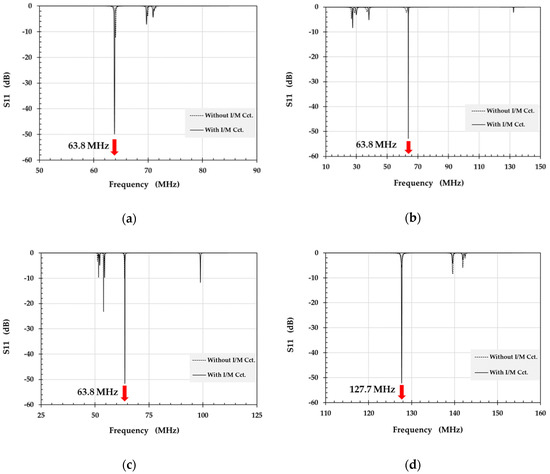 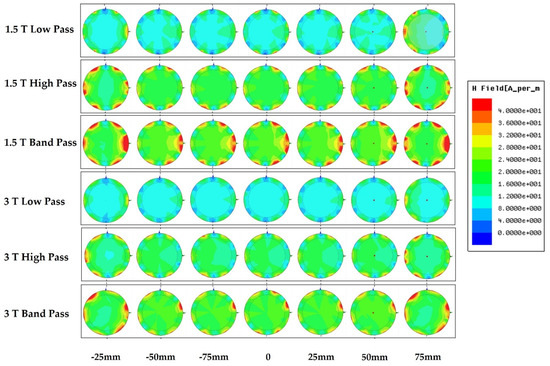 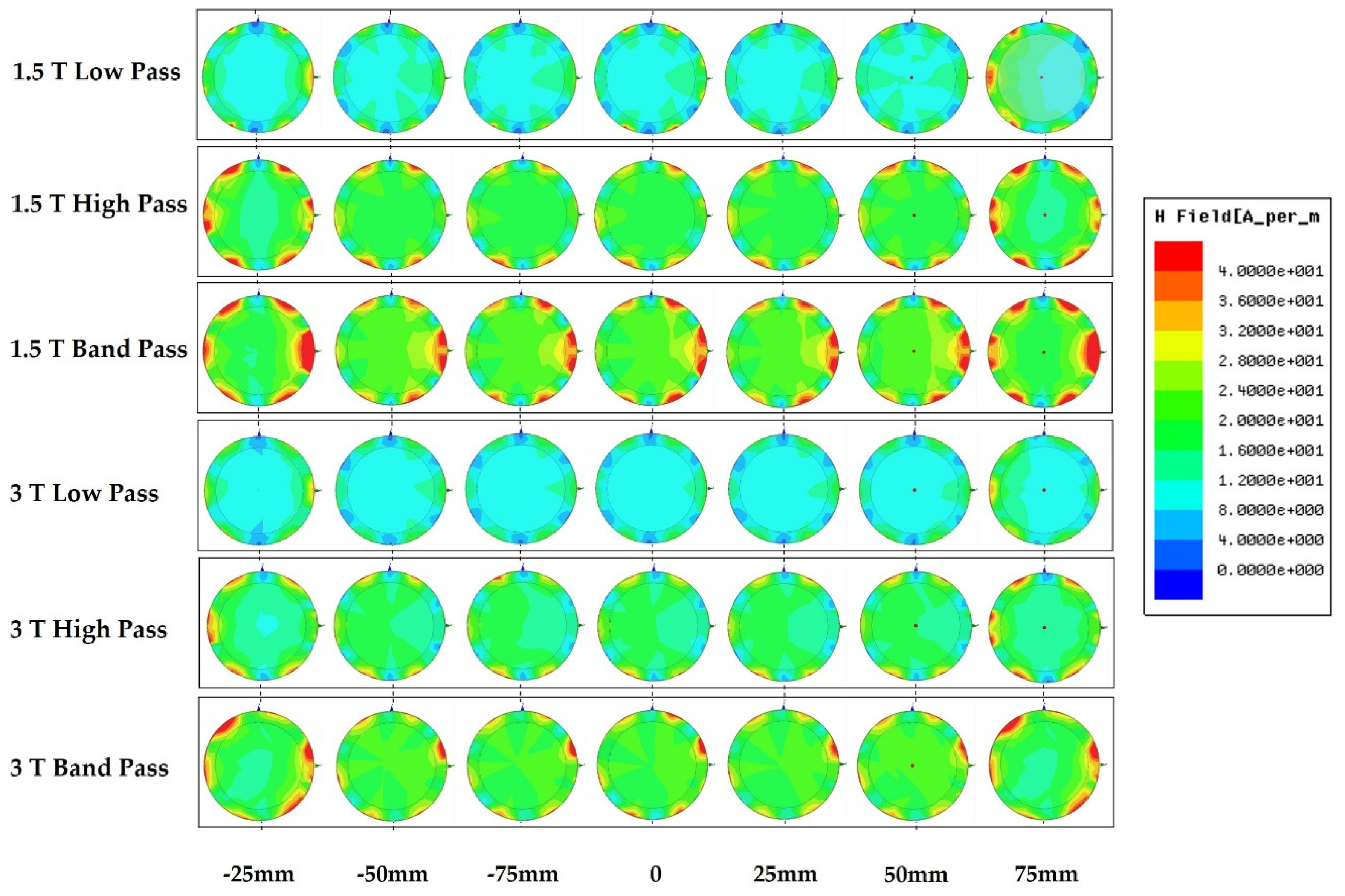