Accurate generative chatbots are usually trained on large datasets of question–answer pairs. Despite such datasets not existing for some languages, it does not reduce the need for companies to have chatbot technology in their websites. However, companies usually own small domain-specific datasets (at least in the form of an FAQ) about their products, services, or used technologies. In this research, we seek effective solutions to create generative seq2seq-based chatbots from very small data. Since experiments are carried out in English and morphologically complex Lithuanian languages, we have an opportunity to compare results for languages with very different characteristics. We experimentally explore three encoder–decoder LSTM-based approaches (simple LSTM, stacked LSTM, and BiLSTM), three word embedding types (one-hot encoding, fastText, and BERT embeddings), and five encoder–decoder architectures based on different encoder and decoder vectorization units. Furthermore, all offered approaches are applied to the pre-processed datasets with removed and separated punctuation. The experimental investigation revealed the advantages of the stacked LSTM and BiLSTM encoder architectures and BERT embedding vectorization (especially for the encoder). The best achieved BLUE on English/Lithuanian datasets with removed and separated punctuation was ~0.513/~0.505 and ~0.488/~0.439, respectively. Better results were achieved with the English language, because generating different inflection forms for the morphologically complex Lithuanian is a harder task. The BLUE scores fell into the range defining the quality of the generated answers as good or very good for both languages. This research was performed with very small datasets having little variety in covered topics, which makes this research not only more difficult, but also more interesting. Moreover, to our knowledge, it is the first attempt to train generative chatbots for a morphologically complex language.
Keywords: generative chatbot; encoder–decoder architecture; LSTM; BiLSTM; fastText and BERT word embeddings generative chatbot; encoder–decoder architecture; LSTM; BiLSTM; fastText and BERT word embeddings

Modern society is not imaginable without personal virtual assistants and conversational chatbots such as, e.g., Siri, Alexa, Google assistant, Cortana; they are completely changing our communication habits and interactions with technology. Intelligent chatbots are fast and can substitute some human functions; however, artificial intelligence (AI) and natural language processing (NLP) technologies are still limited with respect to replacing humans completely.
The first chatbot ELIZA [1] invented in 1966 was based on keyword recognition in the text and acted more as a psychotherapist. ELIZA did not answer questions; it asked questions instead, and these questions were based on the keywords in human responses. Currently, there exist different types of chatbots according to communication channels (voice-enabled or text-based), knowledge domain (closed, general, or open domain), provided service (interpersonal or intrapersonal), used learning methods (rule-based, retrieval-based, or machine learning-based), and provided answers (extracted or generated answers).
Chatbot features such as its appearance/design or friendly human-like behavior are important, but not as important as adequate reactions to human requests and correct fluent answers. Therefore, a focus of our research is on natural language understanding (NLU) (responsible for comprehension of user questions) and natural language generation (NLG) (responsible for producing answers in the natural language) modules. Accurate generative-based chatbots are trained on large datasets; unfortunately, such datasets are not available for some languages. Despite this, companies/institutions often own small question–answer datasets (at least in the form of frequently asked questions (FAQs)) and want to have chatbot technology on their websites.
In this research, we explore seq2seq-based deep learning (DL) architecture solutions by training generative chatbots on extremely small datasets. Furthermore, our experiments are performed with two languages: English and morphologically complex Lithuanian. The generative chatbot creation task for the Lithuanian language is more challenging due to the following language characteristics: high inflection, almost twice larger vocabulary (compared to English), rich word-derivation system, and relatively free word-order in a sentence.

Experiments with generative chatbots were performed using a small domain-specific manually created dataset, having 567 QA pairs. This dataset contains real questions/answers about the company Tilde’s (https://tilde.lt/) products, prices, supported languages, and used technologies. The dataset is available in two versions: English (EN) and Lithuanian (LT) (statistics about these datasets can be found in Table 1). Questions and answers in English are manually translated from Lithuanian.
The datasets for both languages were pre-processed using the following steps:

The seq2seq framework introduced by Google was initially applied to NMT tasks [13,25]. Later, in the field of NLP, seq2seq models were also used for text summarization [26], parsing [27], or generative chatbots (as presented in Section 2). These models can address the challenge of a variable input and output length.
Formally, the seq2seq task can be described as follows: let (x1, x2, …, xn) be an input (question) sequence and (y1, y2, …, ym) be an output (answer) sequence, not necessarily of the same length (n ≠ m). The architecture of seq2seq models contains two base components (see Figure 1): (1) anencoder, responsible for encoding the input (x1, x2, …, xn) into an intermediate representation hn(Q) (which is the last hidden state of the encoder), and (2) a decoder, responsible for decoding the intermediate representation hn(Q) = h0(A) into the output (y1, y2, …, ym). The conditional probability for (x1, x2, …, xn) to generate (y1, y2, …, ym) is presented in Equation (1).
Thus, the main goal of the task is to maximize the conditional probability max(p(y1, y2, …, ym|x1, x2, …, xn)) that, for (x1, x2, …, xn), the most probable sequence (y1, y2, …, ym) would be found.
More precisely, the encoder–decoder architecture is composed of several layers: (1) an encoder embedding layer, converting the input sequence into word embeddings: (x1, x2, …, xn) → (x1′, x2′, …, xn′); (2) an encoder recurrent-based layer; (3) a decoder embedding layer, converting the output sequence into the word embeddings: (y1, y2, …, ym) → (y1′, y2′, …, ym′); (4) a decoder recurrent-based layer; (5) a decoder output layer generating the conditional probability ot = p(yt|hn(Q), y1, …, yt−1) for yt from the hidden state ht(A) at each time step t. Virtual words <bos> and <eos> represent the beginning and the end of the answer, respectively; the generation of the answer is terminated after generation of <eos>.
In the encoder and decoder layers, we use the recurrent-based approach (suitable for processing sequential data, i.e., text), but not the simple recurrent neural network (RNN), because it suffers from the vanishing gradient problem and, therefore, is not suitable for longer sequences. Instead of RNN, we employ long short-term memory (LSTM) (introduced in Reference [28]) and bidirectional LSTM (introduced in Reference [29]) architectures, both having long memory. LSTM runs the input forward and, therefore, preserves information from the past, whereas bidirectional LSTM can run the input in two ways, forward and backward, thus preserving information both from the past and from the future in any hidden state. Both encoder and decoder are jointly trained; errors are backpropagated through the entire model and weights are adjusted. The encoder–decoder weights are adjusted in 200 epochs with the batch size equal to 5.
Three different seq2seq architectures (in Figure 2, Figure 3 and Figure 4) explored in our experiments were implemented with the functional API using Tensorflow [30] (the python library used for dataflow and machine learning) with Keras [31] (the python library for deep learning). Used architectures were plotted with the plot_model function in Keras.
All seq2seq architectures were applied on top of word embeddings. In our experiments, we used the following types:
Different vectorization types were tested in the following encoder–decoder units:

In this research, we presented the first generative chatbot results obtained on very small domain-specific datasets for English and morphologically complex Lithuanian languages.
We investigated different encoder–decoder architectures (with LSTM, stacked LSTM, and BiLSTM), different embedding types (one-hot, fastText, and BERT), different vectorization types in different encoder and decoder units, and different punctuation treatment (its removal or separation).
The best BLUE values on the English/Lithuanian datasets with removed and separated punctuation were ~0.513/~0.505 and ~0.488/~0.439, respectively. This research revealed that more complex architectures (based on the stacked LSTM and BiLSTM encoders) are more accurate compared to simple LSTM. It also demonstrates the advantages of BERT embeddings. Despite BLUE values for the Lithuanian language being a bit lower, compared to English, the results are good enough to be applied in practice. This research is important and interesting because (1) generative chatbots are trained on very small domain-specific data, and (2) it reports the first generative chatbot results for a morphologically complex language.
Despite the search for effective solutions on small datasets being much more challenging, in future research, we are planning to augment our datasets with newly covered topics, to experiment with different seq2seq architectures by tuning their hyper-parameters. 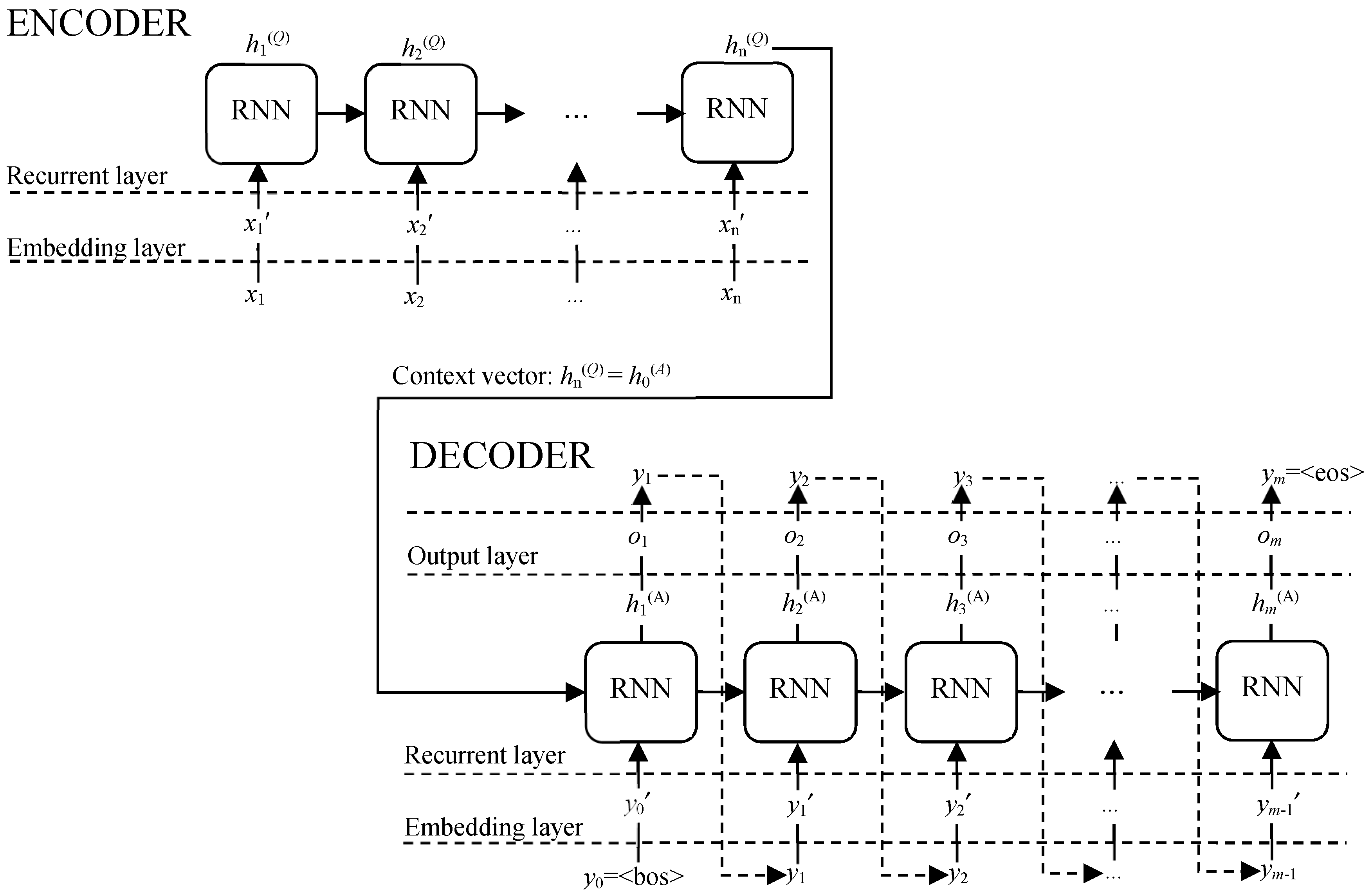 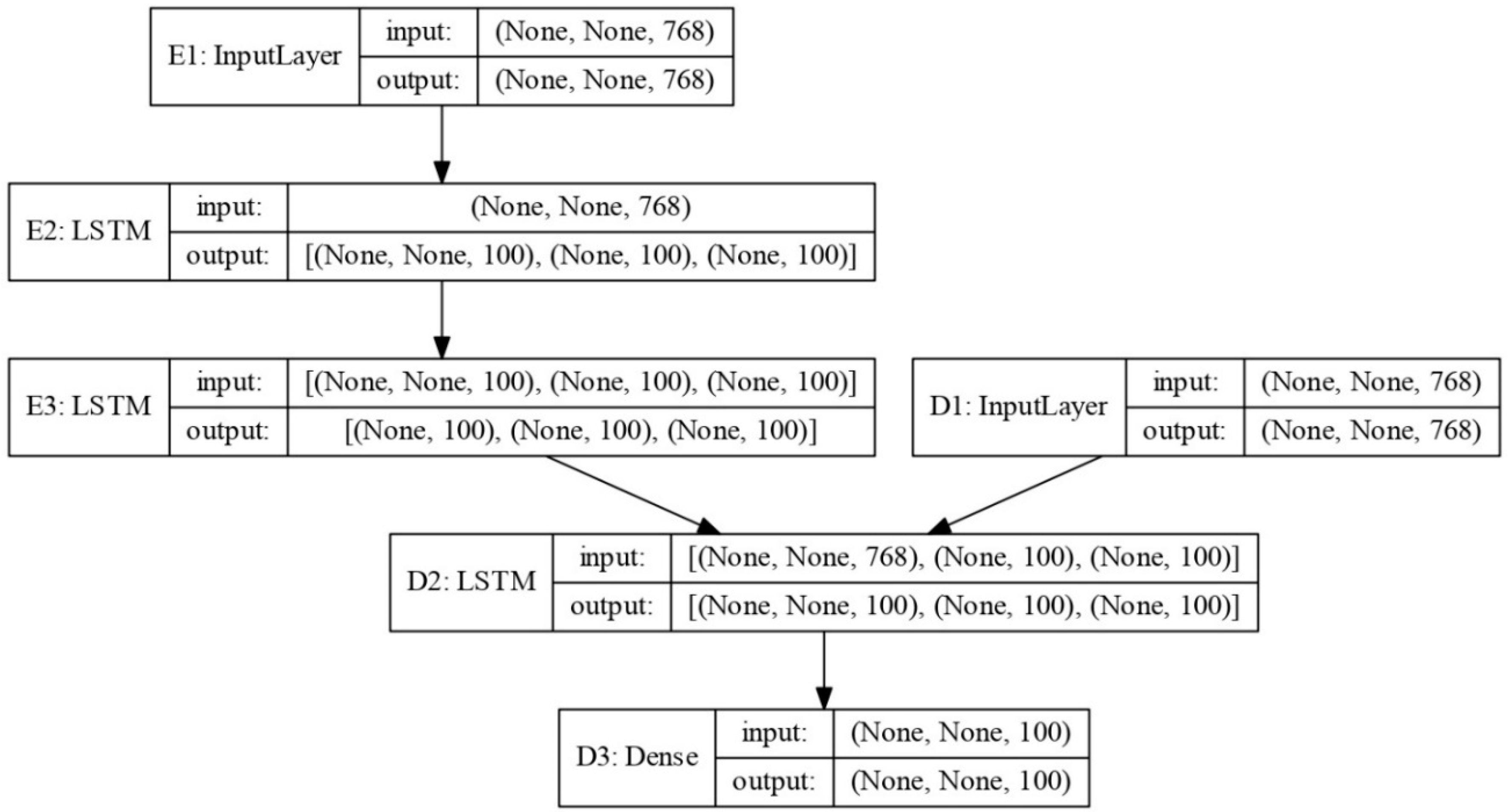 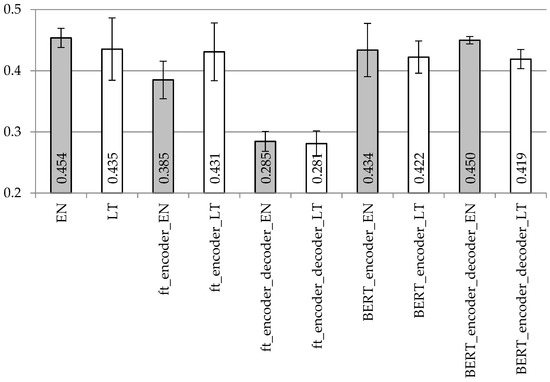 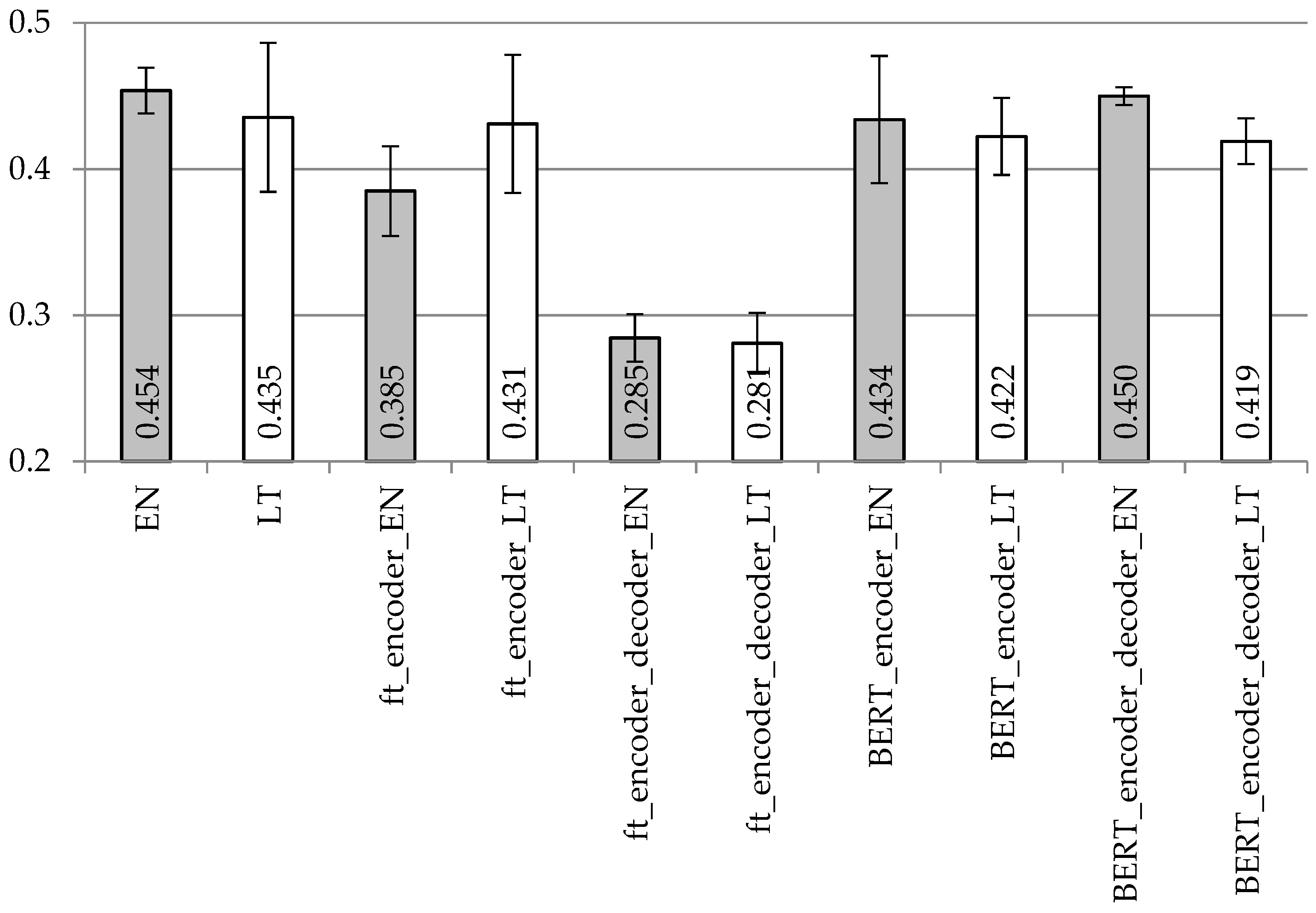 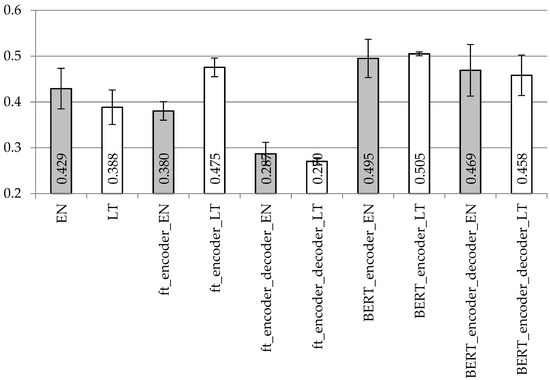 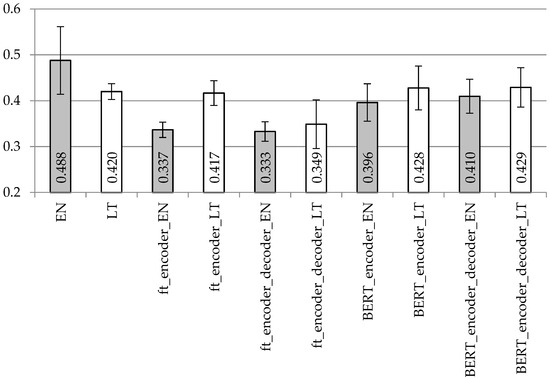 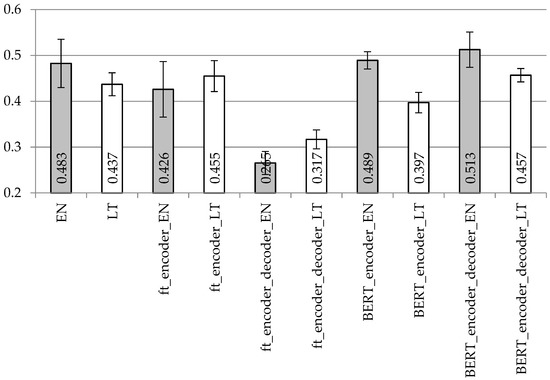 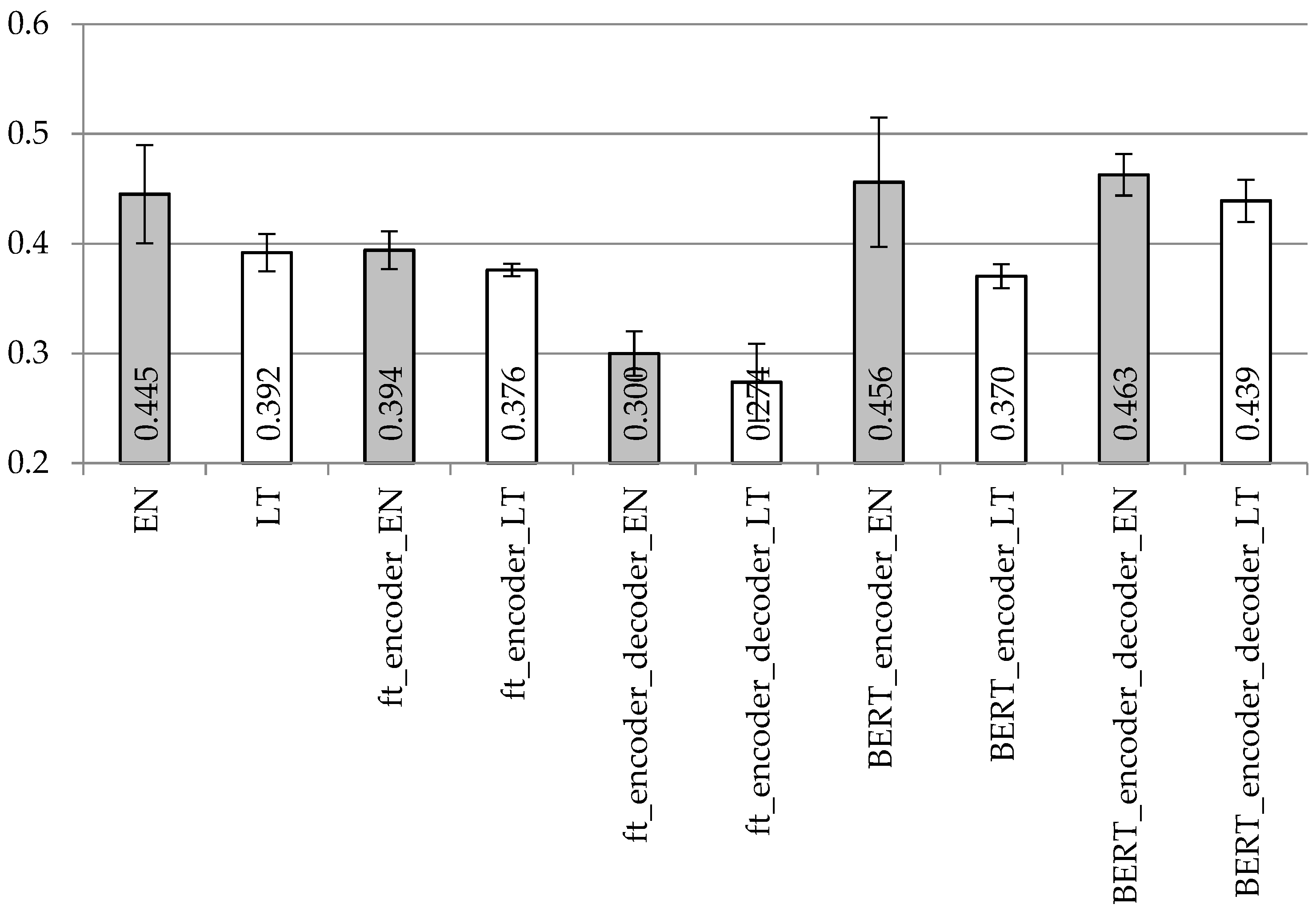