An Adaptive Bayesian Melding Method for Reliability Evaluation Via Limited Failure Data: An Application to the Servo Turret
Previous Article in Journal

Reducing the crack width is a vital feature for protecting rebars from corrosion. In this investigation, the impact of steel fibres (SFs) on the cracking of recycled coarse aggregate reinforced concrete (RCARC) beams was investigated. Twenty-seven reinforced concrete (RC) experimental samples (150 mm × 200 mm × 1500 mm) were manufactured. Shear rebars were considered with different spacings. Specimens were tested under a four-point flexural setup. Recycled coarse aggregate (RCA) from a destroyed building was employed at 0%, 50% and 100% by weight. SFs were added at three contents (0%, 1% and 2%) in order to reduce the crack width. The mid-span load–displacement relationship and the crack propagation and width were measured during the tests. Therefore, this study intended to assess the impact of utilising RCA and natural coarse aggregate on cracks’ spacing and propagation in RC beams when SFs were employed. The obtained outcomes were compared with the requirements of CSA S474, NS 3473E, EC2-04, CEB-FIP and ACI 224R-01. It was found that enough shear rebars should be provided through the beams to control the crack width and propagation, but that SFs enhanced the bending performance of RCARC with no shear rebars.
Keywords: crack width; flexural behaviour; recycled aggregate; reinforced concrete beams; steel fibres crack width; flexural behaviour; recycled aggregate; reinforced concrete beams; steel fibres

A short-term literature review indicated that many types of studies have been done to evaluate the crack spacing and width in RC beams. According to previous studies, crack spacing is slightly reduced by increasing the SF content. Alternatively, SFs can enhance the bending and shear behaviour of concrete beams [58,59,60] but the impact of RCA on the flexural and shear crack width and propagation has not been studied. Therefore, in this study, the influence of RCA and SF on the compressive and tensile strength of concrete was evaluated because the compressive and tensile strengths of concrete influence the flexural and shear strength of RC beams. This issue could also be observed in models proposed by several standards. Then, the influence of SFs on the crack spacing of RC beams manufactured using different values of RCA and NCA, as well as of the shear rebar’s spacing, was analysed. The main objective was to control the cracking and their propagation in RC beams when RCA was used, which is an important factor in the failure mode of RC beams and the corrosion potential of rebars. After the evaluation of cracking and their width in experimental specimens, the results were compared with those from numerical models proposed by several standards to show the ability of codes to predict crack widths when RCA and SFs are used.

As discussed above, the crack spacing and propagation in SF RCARC beams was investigated. In this section, the properties of materials’ and specimens’ characteristics are described briefly.
The NCA was characterised according to the Chaboki et al. investigation [58]. In this research, RCA and NCA were used in specimens. The RCA came from demolished buildings and RCA was incorporated at 0%, 50% and 100% by weight. The used NCA and RCA are demonstrated in Figure 5 and Figure 6, correspondingly. Additionally, the grading graph of the aggregates is demonstrated in Figure 7. The characteristics of the aggregates were determined and are shown in Table 1.
Cement was mixed with the RCA, NCA and SFs, and then a solution of water and high-performance super-plasticiser was added to the mix until the SFs were uniformly distributed in the concrete mixture. The SFs were used at 0%, 1% and 2% (by volume). In addition, the NCA was substituted by RCA at 0%, 50% and 100% by mass. The concrete mix design properties and the compression and tension strengths for the various concrete mixes are specified in Table 2.
In Table 2, SF and RCA in the denomination of the mixes indicate the SF and RCA contents, e.g. 1SF-50RCA means 1% SFs by volume and 50% RCA by mass. Rebars with diameters of 20 mm, 10 mm and 8 mm were employed as tensile, compressive and shear rebars, correspondingly. The rebars were investigated in the direct tension setup and their specifications are shown in Table 3. To make the mixes, SFs with two bent ends were used. The tensile strength, modulus of elasticity and failure strain of the SFs were 200 GPa, 2 GPa and 3%, correspondingly. It should be stated that the length and equivalent diameter of the SFs were respectively 60 mm and 0.9 ± 0.03 mm, as shown in Figure 8.
In this study, a total of 27 RC beams with a 200 mm height, 150 mm width and 1500 mm span were produced using diverse SF and RCA contents. Shear rebars were spaced at 100 mm and 200 mm and without rebars. Three of these laboratory samples were selected as the control samples with no SFs or RCA. The geometrical characteristics and arrangements of the rebars are shown in Figure 9.

After 28 days, the specimens were tested using a four-point bending setup. The beams were supported by round bars and two concentrated line loads, as shown in Figure 10a.
The test was carried out under displacement control circumstances and the stopping condition was set to be the failure of the specimens. The deflection of the beam was documented at each load step using Linear variable differential transformers (LVDTs). Furthermore, to measure the strain–stress performance of the cylindrical specimens, a laser strain gauge device was used, as shown in Figure 10b. It should be stated that the friction in this setup was automatically neglected by using the laser strain gauge. Conversely, to measure the crack widths in the beams, a mechanical calliper with an accuracy of 0.01 mm was used and the crack widths were recorded at each loading step. In addition, to measure the crack widths, a crack camera was used.

Since the compression and tension strengths of concrete determine the bending performance of concrete beams and their cracking, the impact of the SF and RCA contents on the concrete compression capability was studied. The results are represented in Figure 11. According to this figure, the cracking occurred only in the concrete surface when SFs were added and the specimen did not collapse, which became more perceptible when 2% SFs were added. The lack of concrete tensile strength led to collapsing of the specimen and the cores of the specimens were broken. Hence, by adding SFs, a resistant core of concrete specimens prevented it from collapse, and only the specimens’ surface was cracked and detached. This issue resulted from the bridging role of SFs that kept the particles close together and increased the tensile strength of the concrete. Alternatively, due to RCA’s higher and more angled specific surface compared to NCA, they were better impregnated with cement paste, which prevented the complete disintegration of the sample. Hence, the incorporation both SFs and RCA increased the adhesion between the cement paste and the aggregates and fibres. Therefore, more force was needed to separate the particles from each other and break than the unreinforced concrete, which improved the behaviour of the concrete.
The tensile behaviour of the concrete specimens with RCA and SFs was also studied. In order to investigate the failure of specimens under the Brazilian test (splitting tensile strength), the results are presented in Figure 12. According to this figure, a specimen with no SFs was divided into two parts. However, the addition of SFs prevented the two parts from separating when it failed due to the bridging role of the fibres in the concrete paste. Furthermore, using RCA weakened the tensile strength of the specimen, which could be compensated for by adding SFs. Hence, RCA could be used as a replacement for NCA when SFs were used, with no considerable reduction in the tensile strength.
To evaluate the compressive and tensile behaviour of the unreinforced concrete in detail, the stress–strain performance of the specimens produced using different RCA and SF contents were studied. Figure 13 shows the stress–strain curves of the tested specimens.
Each stress–strain curve was obtained by averaging the stress–strain outcomes of three specimens. These relationships were determined using uniaxial compression tests. Using SFs led to an increased strain, which increased the deformation of the concrete and reduced the crack widths, but it did not have an impact on the maximum stress. Therefore, the strain was significantly improved when 2% SFs were used and the concrete beams could be deformed more without a sudden collapse with the use of SFs. Contrariwise, raising the RCA content reduced the maximum strain but the maximum stress increased. The maximum stress and strain increased when both RCA and SFs were used. Therefore, NCA could be replaced by RCA when SFs were used with no reduction in the tensile performance of the concrete. Furthermore, trend lines with high R2 values were determined in order to predict the stress and strain of the RCARC. As per Figure 13, the maximum error between the experimental outcomes and presented formulas was 6%, which indicates a high accuracy. Table 4 presents the obtained formulas for different specimens.

5. Flexural Capacity and the Load–Displacement Relationship

In this research, the impact of SFs on the cracking in RCARC beams was evaluated. The research involved tests on 27 RC beams. In the specimens, SFs were mixed at different contents (0%, 1% and 2%). In the tests, the mid-span load–displacement relationship and the crack propagation and widths were measured. The obtained laboratory results were also compared with the proposed equations of CSA S474 (2004), NS 3473E (2003), EC2-04 (2004), CEB-FIP (2010) and ACI 224R-14 (2014). According to the achieved outcomes, the following conclusions could be drawn:

The authors wish to thank the CERIS (Civil Engineering Research and Innovation for Sustainability) research centre and the FCT (Foundation for Science and Technology). 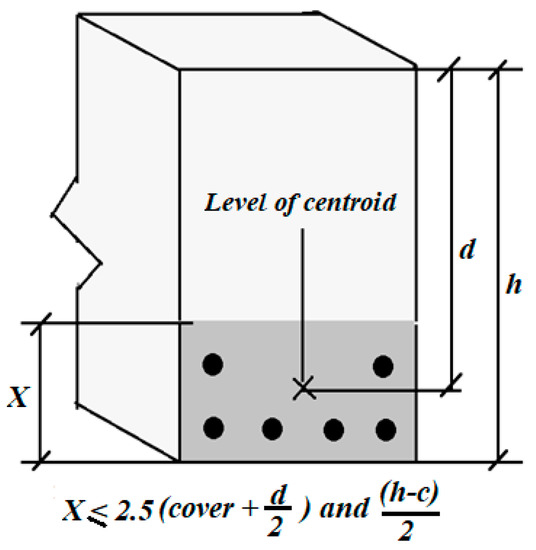 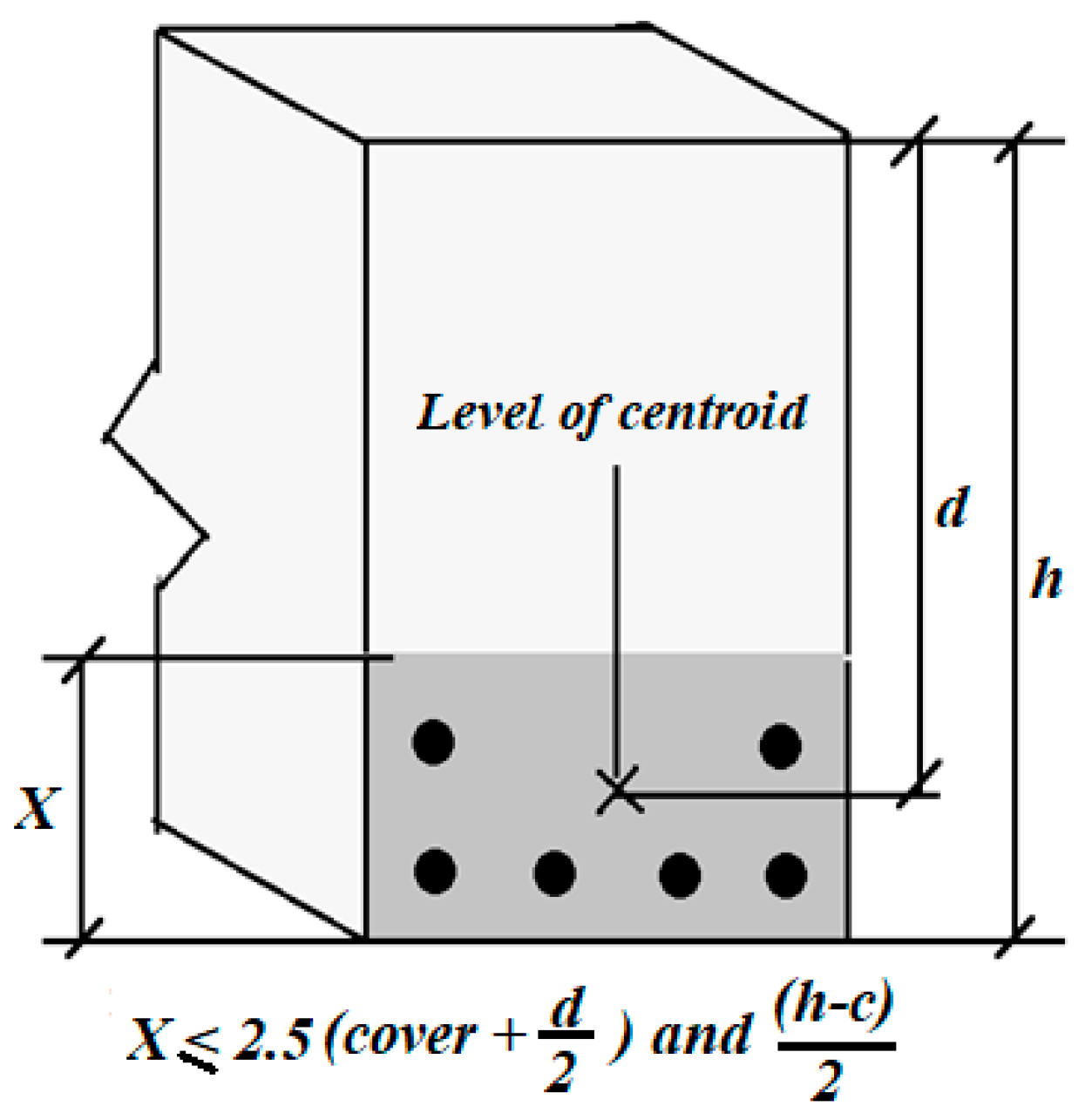 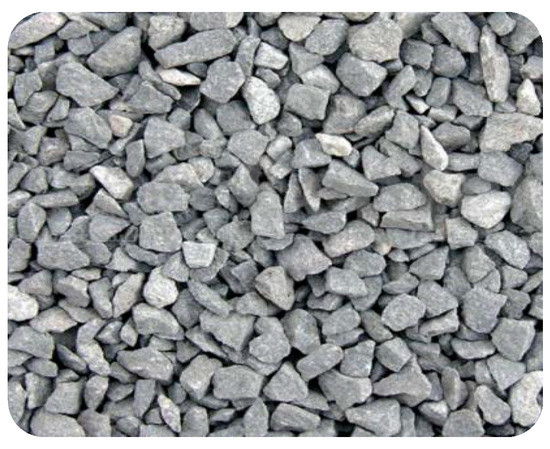 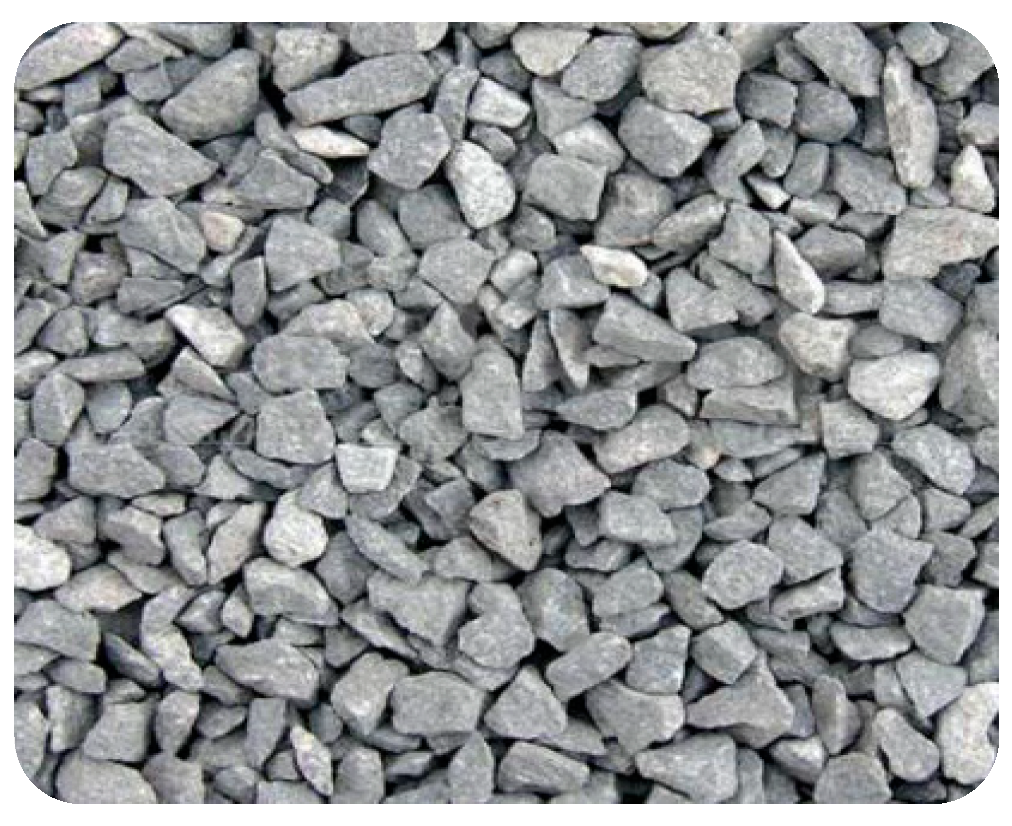 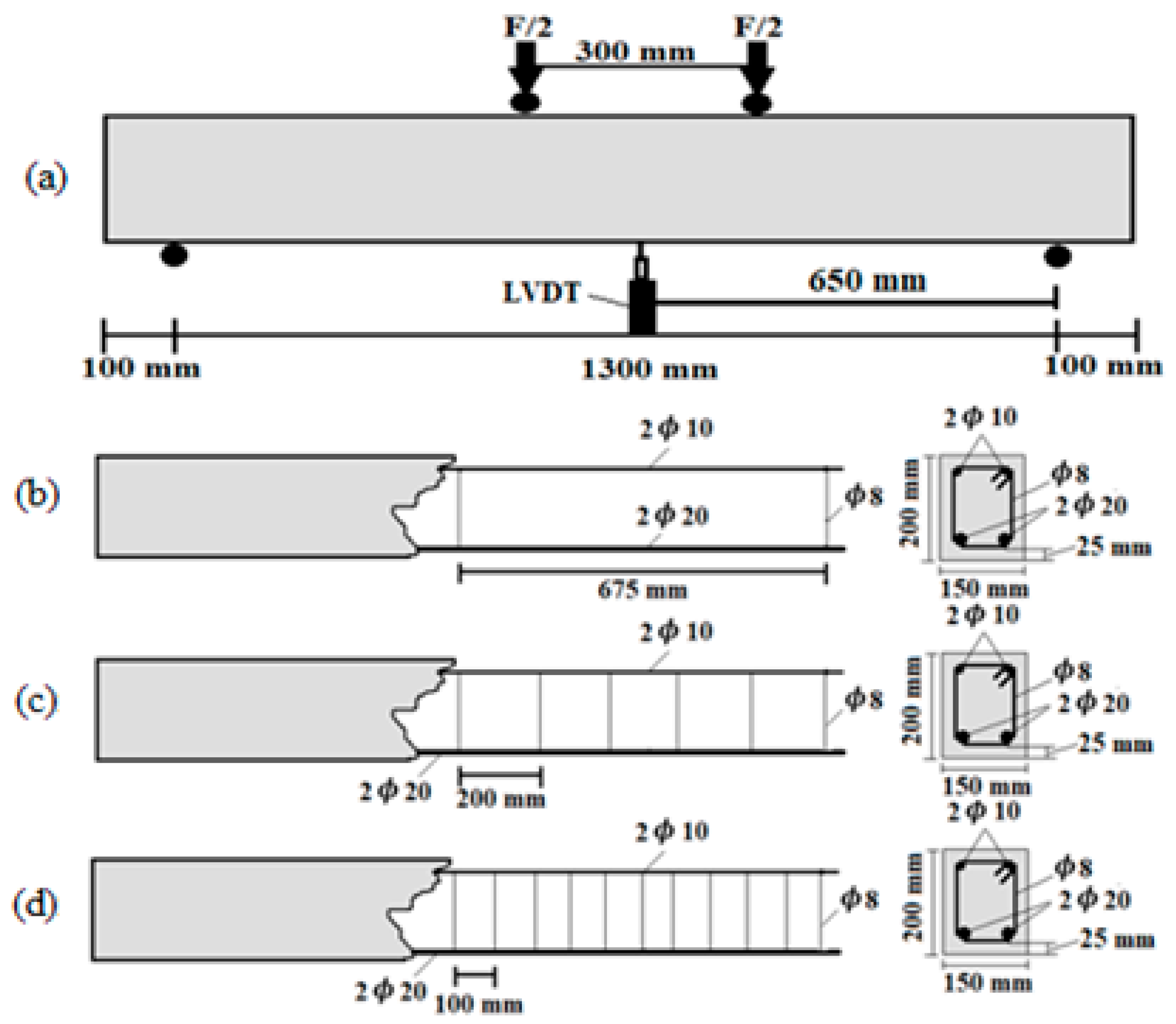 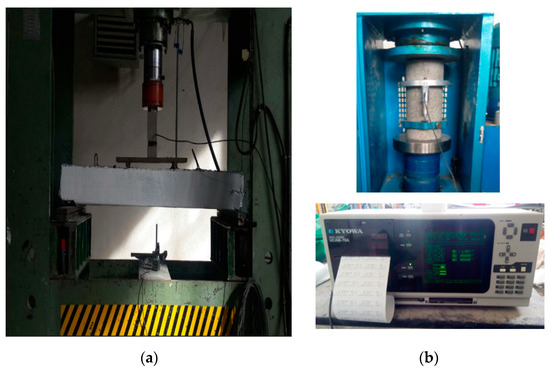 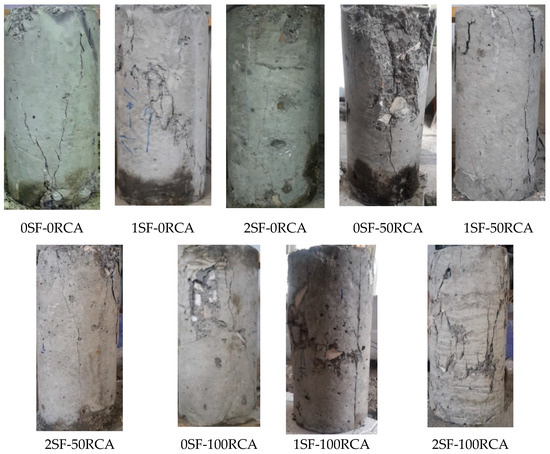 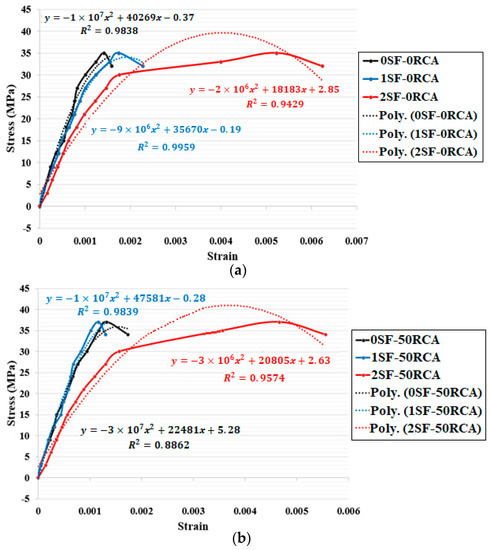 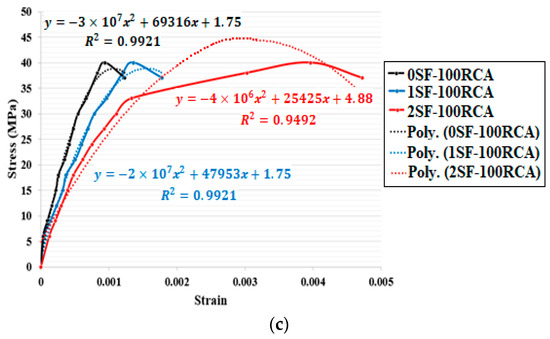 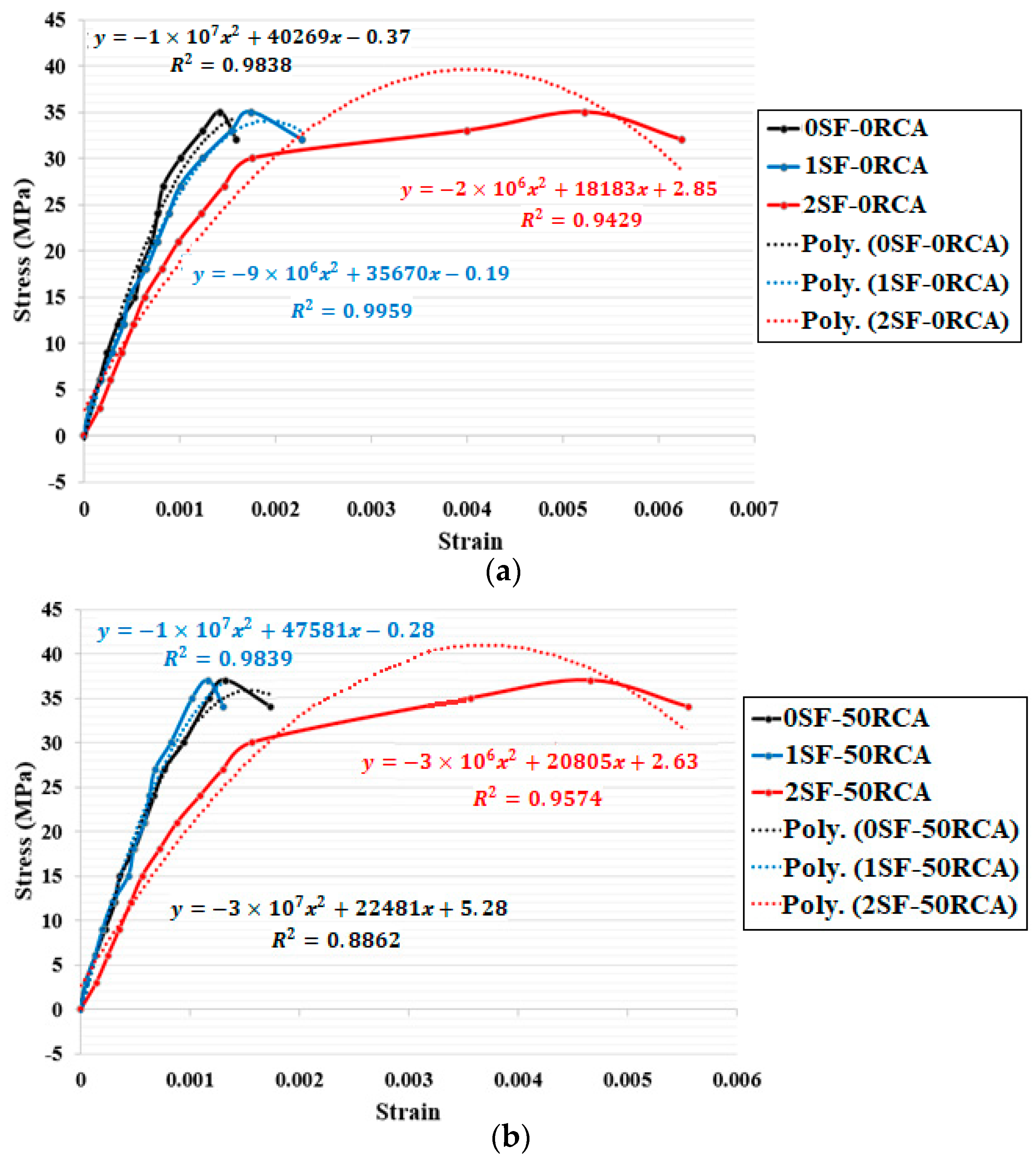 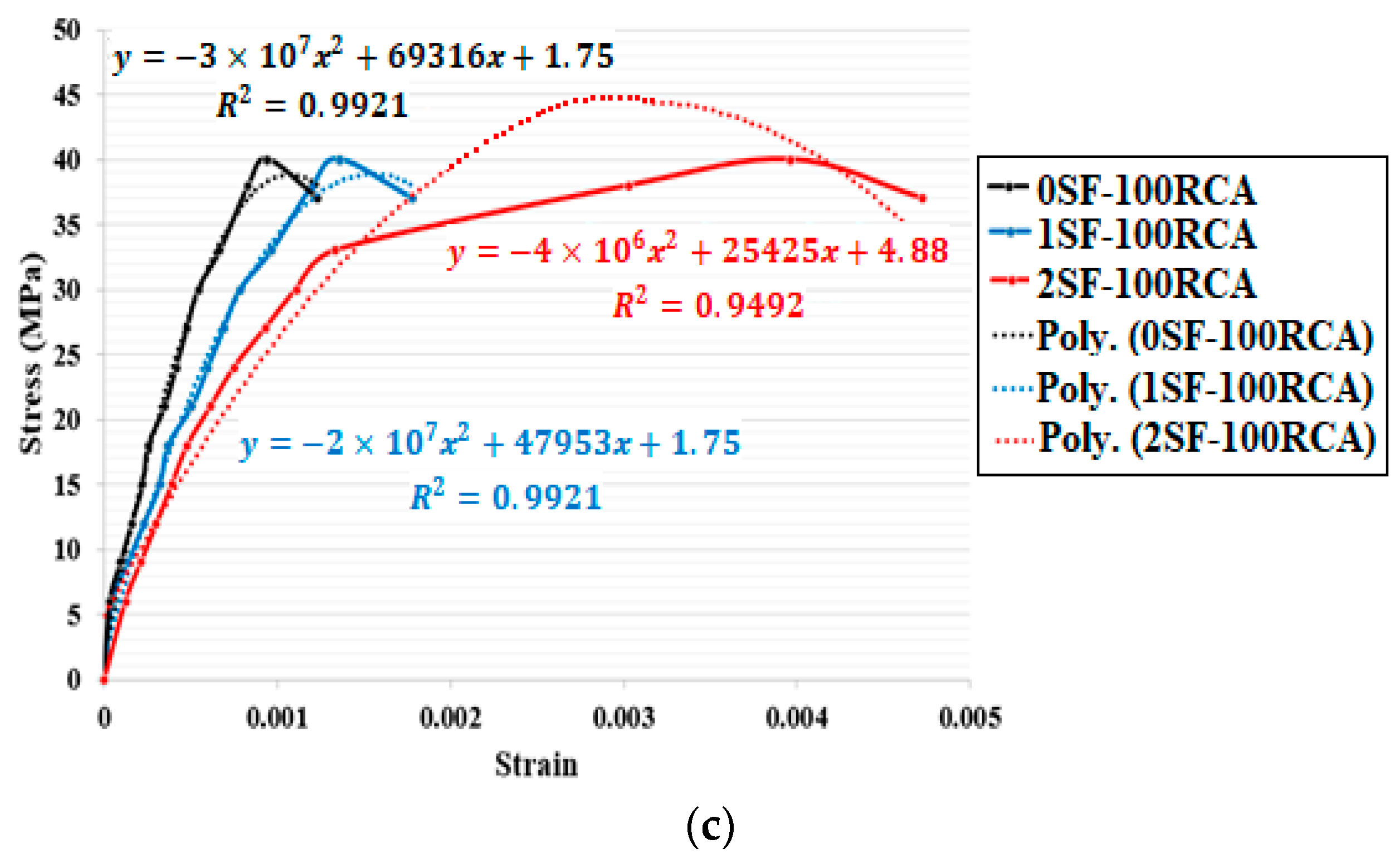 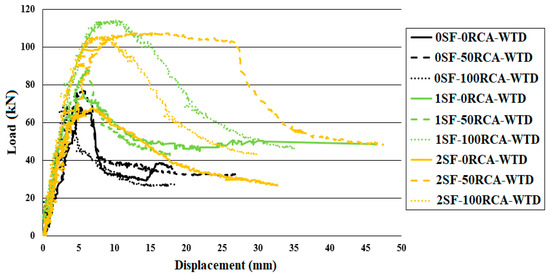 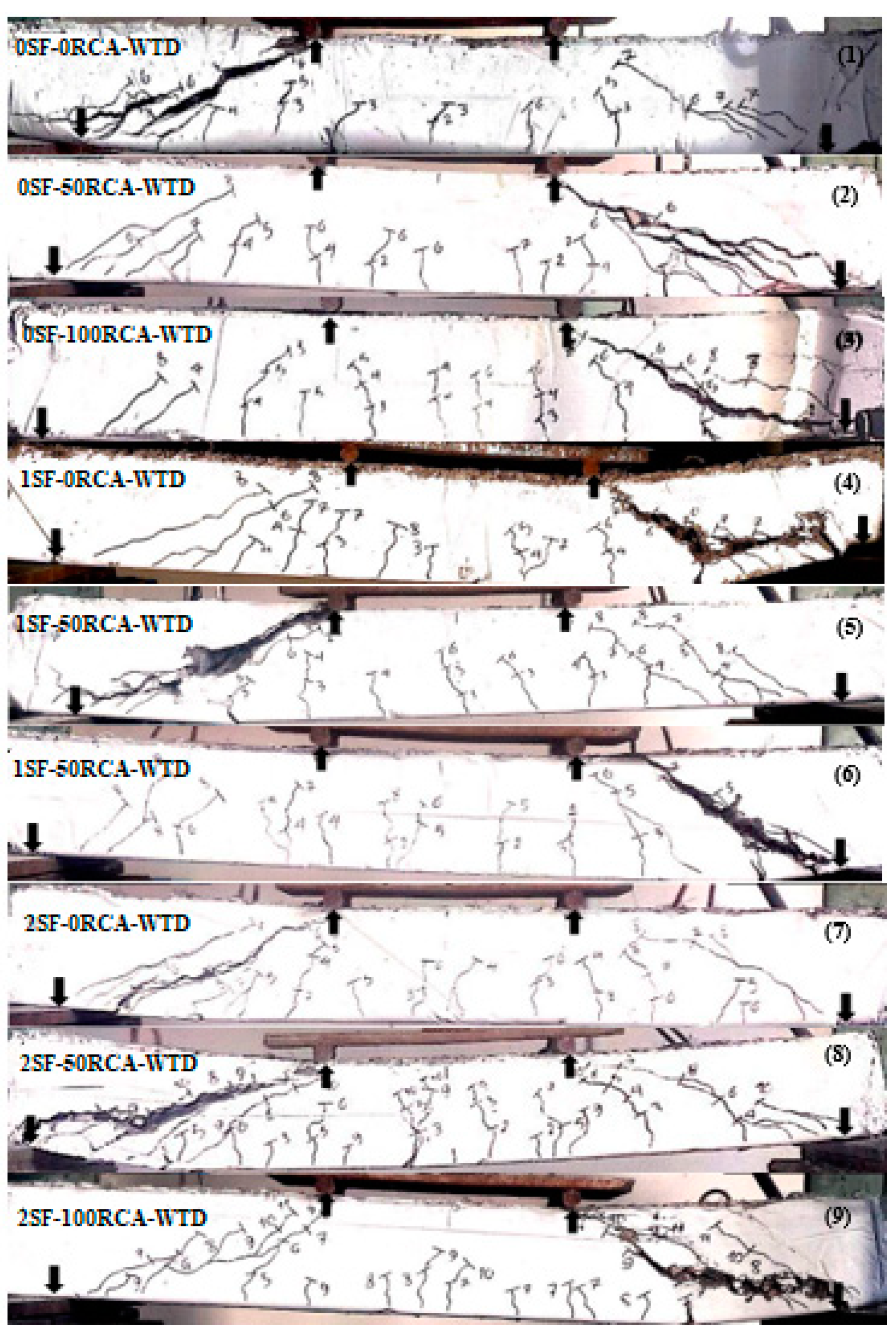 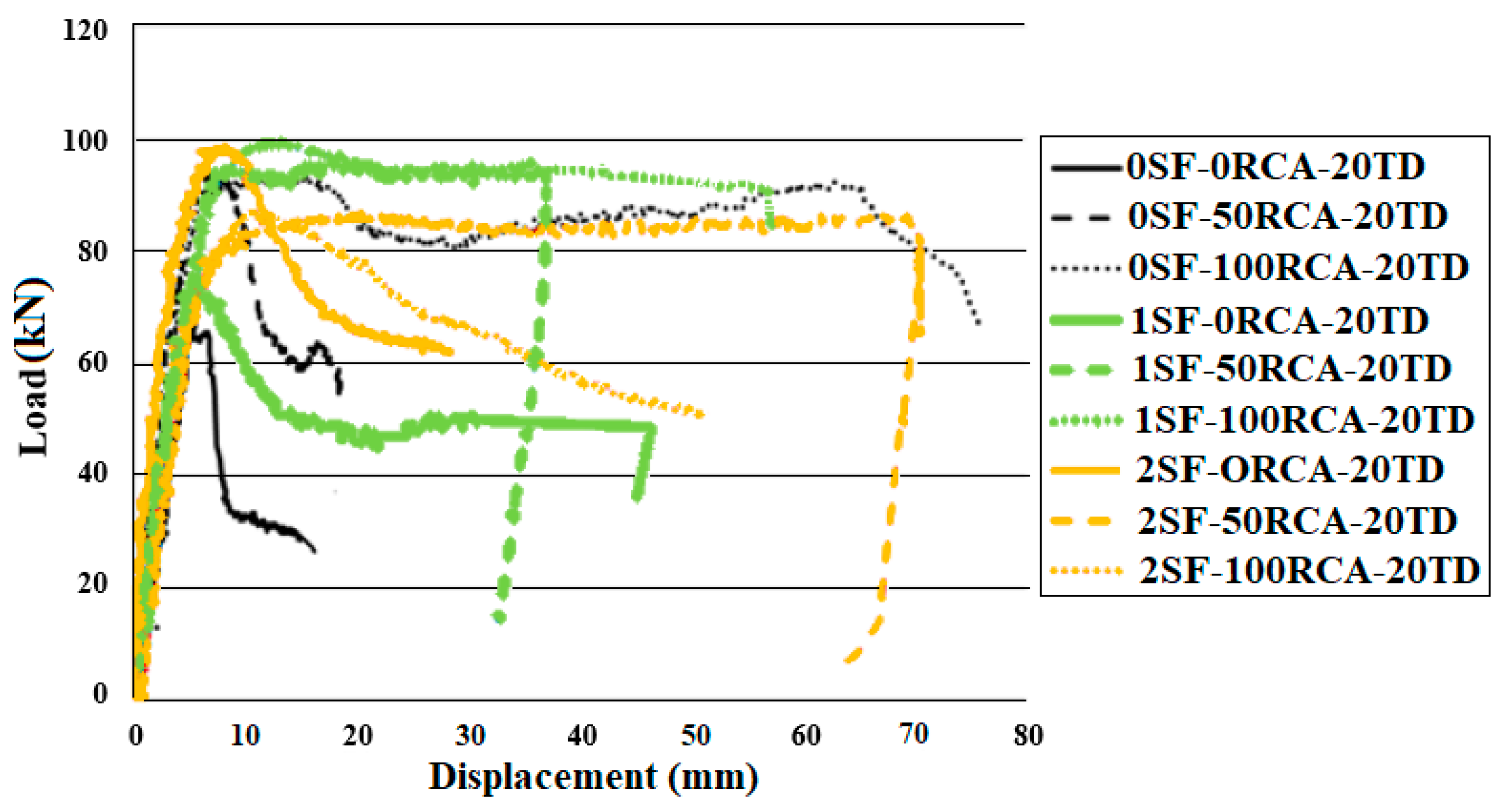 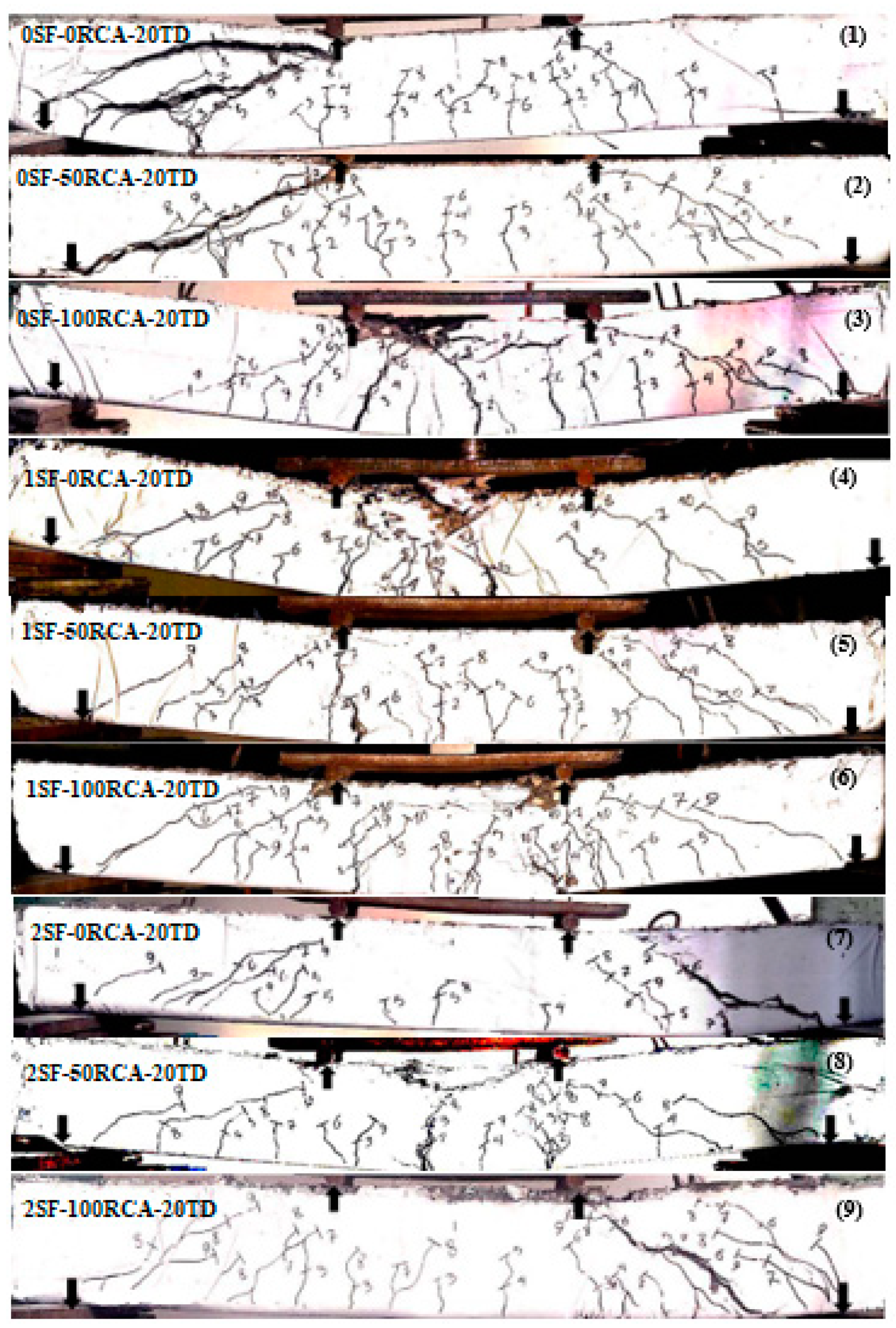 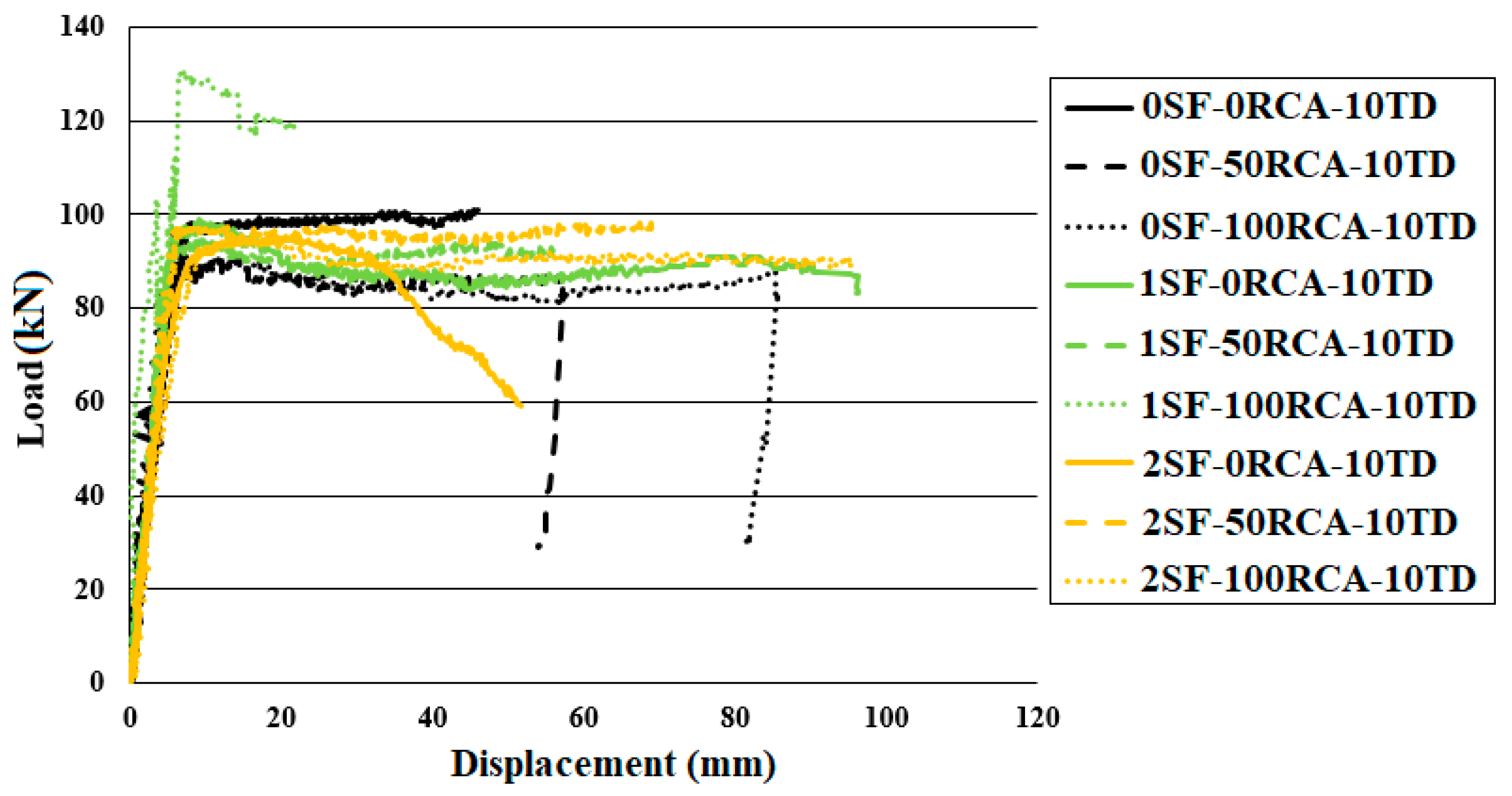 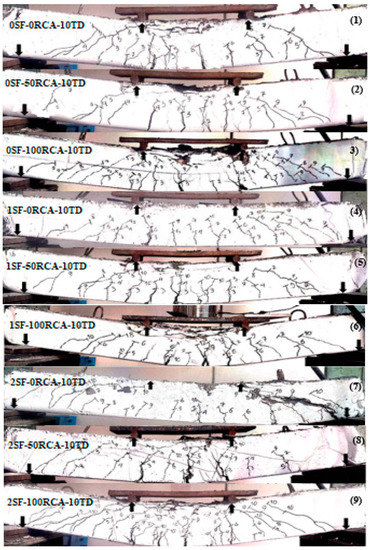 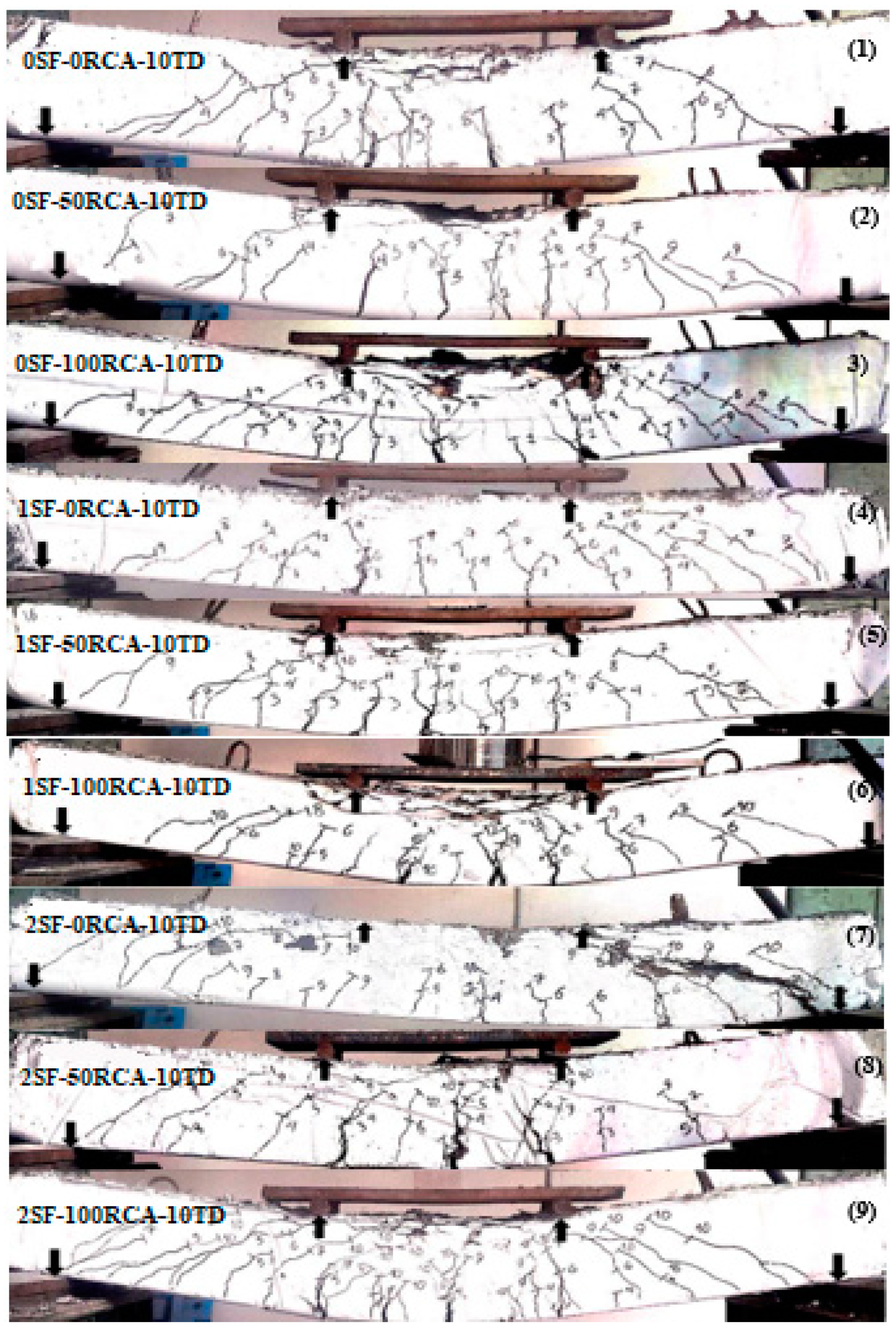 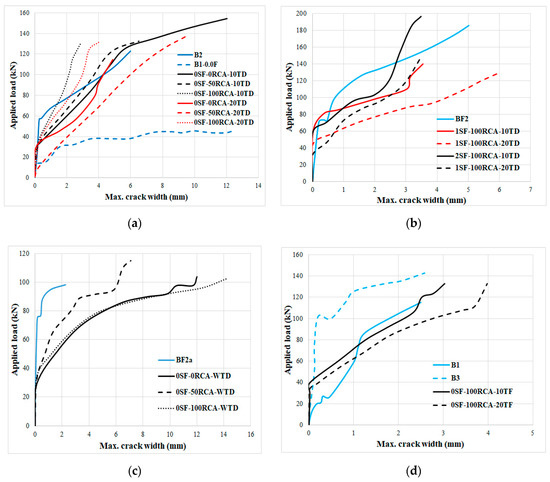 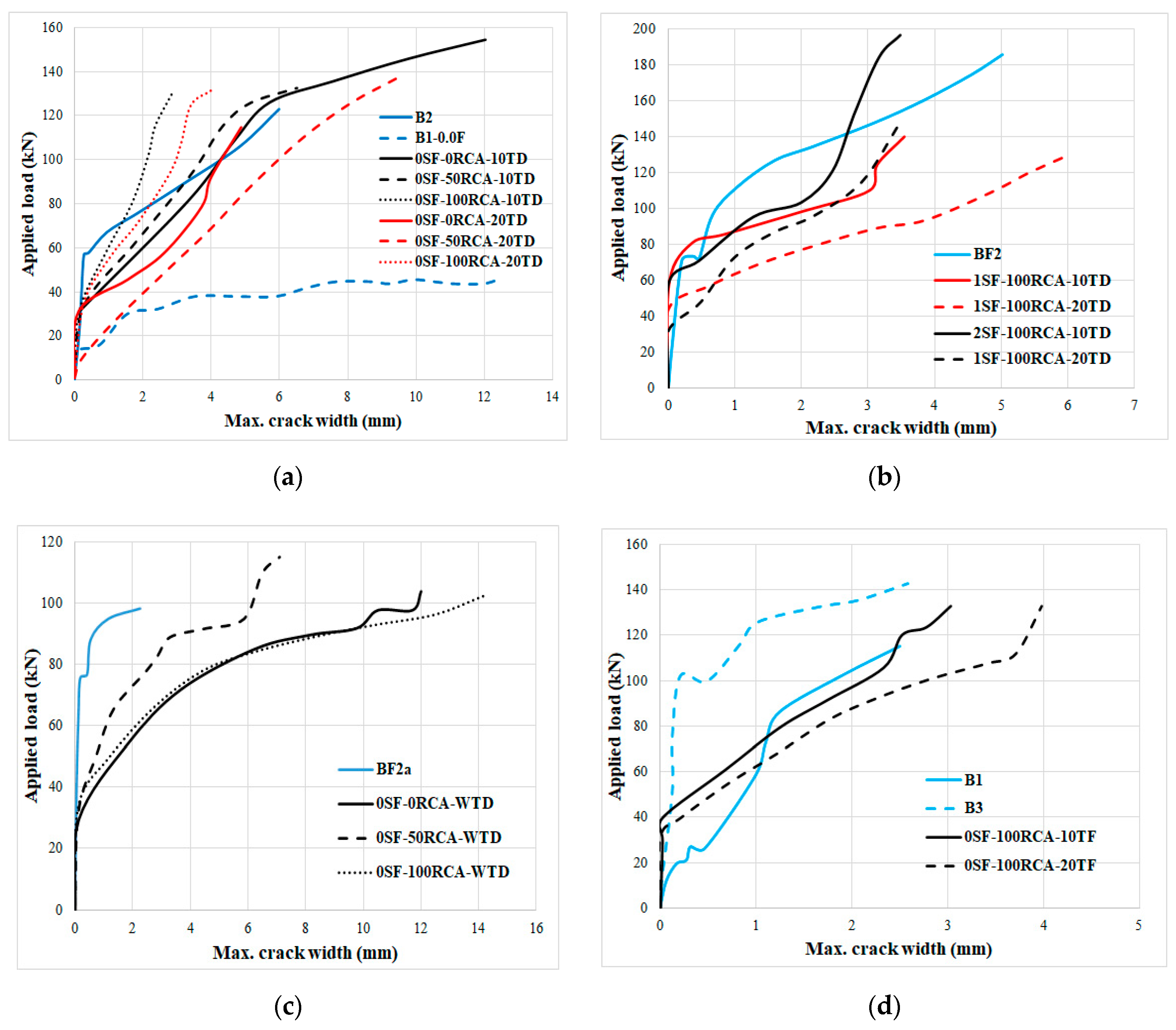 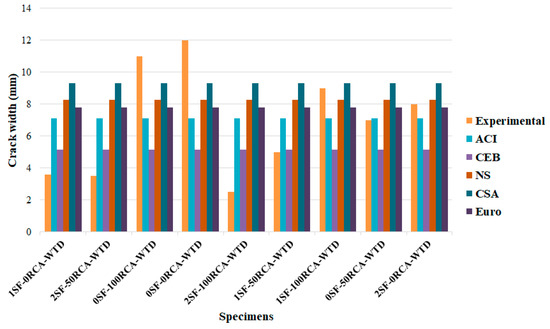 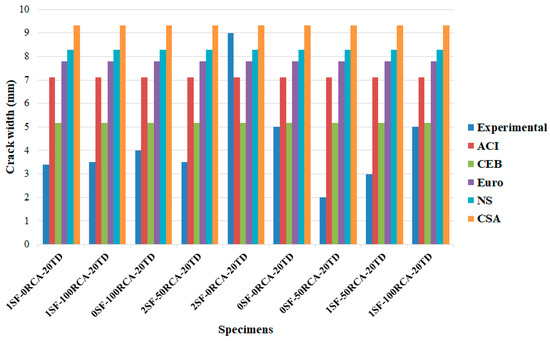 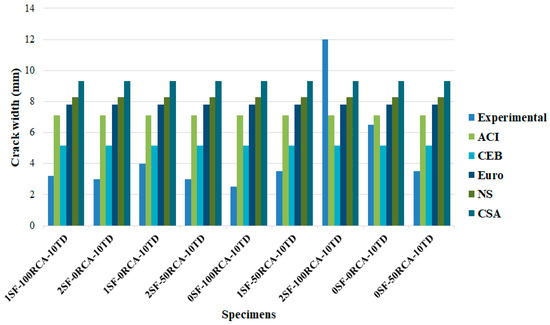 Table 2. Concrete mixes’ compositions and strengths.
Table 2. Concrete mixes’ compositions and strengths.
NFA: natural fine aggregates, SFs: steel fibres. The number before SF refers to the percentage by volume of steel fibres, while the number before the RCA refers to the percentage of recycled coarse aggregate by mass.