Ankle foot orthosis (AFO) is widely used to prevent foot drop and improve walking ability for individuals with cerebral palsy and stroke. However, traditional anterior AFO (TAAFO) could only last within months because the bilateral neck of TAAFO was easy to break. Currently, a 3D-printing technique is used to develop assistive devices for rehabilitation. The study aimed to implement the finite element (FE) method to revise the 3D printed AAFO (3DP-AAFO) and evaluate its strength. A 3.2 mm-thickness for the TAAFOs and 3DP-AAFOs were fabricated, respectively. The stiffness of TAAFO and 3DP-AAFO were tested by a material machine and compared to the FE model. In the FE analysis, the thickness of AAFO model was increased at the neck to enhance its strength. A plantarflexion and dorsiflexion moment were respectively subjected to 3DP-AAFO models to undergo stress analysis. Under the mechanical test, the 3DP-AAFO (K = 1.09 Nm/degree) was 7.8 times stiffer than the traditional AAFO (K = 0.14 Nm/degree). The FE results showed that thickening the 3DP-AAFO on the neck up to 4.7 mm could moderate stress concentration and increase the stiffness of the 3DP-AAFO. Therefore, the study concluded that the 3DP-AAFO was stiffer than the traditional AAFO. Increasing the appropriate thickness around neck of 3DP-AAFO could avoid neck fracture as much as possible. View Full-Text
Keywords: anterior ankle foot orthosis; 3D printing; mechanical test; finite element analysis; biomechanics anterior ankle foot orthosis; 3D printing; mechanical test; finite element analysis; biomechanics
►▼ Show Figures 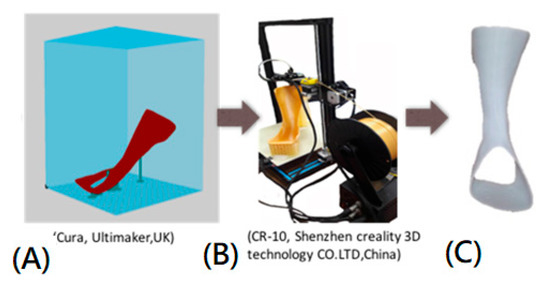