Carbon Mineralization in a Soil Amended with Sewage Sludge-Derived Biochar

Biochar is a carbon-rich organic material, obtained by the thermochemical conversion of biomass in an oxygen-limited environment, used as a soil amendment to stimulate soil fertility and improve soil quality. There is a clear need in developing countries for access to low cost, low technology options for biochar production, for example, top-lit updraft (TLUD) stoves, which are popular and spread worldwide. However, TLUD biochars are inevitably very variable in their properties for a variety of reasons. We present laboratory triplicate tests carried out on TLUD biochars obtained from waste pinewood and a Guadua bamboo. Analyzed properties include specific surface area (A-BET), porosity, skeletal density, hydrophobicity, proximal and elemental composition, cation exchange capacity (CEC), relative liming capacity and pH. SEM images of the bamboo and wood biochars are compared. The biochars were mixed with composted human excreta at 5% and 10% biochar content, and available water content (AWC) was analyzed. Operating temperatures in the TLUD were recorded, showing different behaviors among the feedstocks during the process. Differences in operating temperatures during charring of the bamboo samples seem to have led to differences in A-BET, hydrophobicity and CEC, following unprecedented trends. For the mixtures of the biochars with compost, at 5% biochar no significant differences were observed for AWC. However, in the 10% biochar mixtures, bamboo biochar showed an unexpectedly high AWC. Overall, variations of chemical and physical properties between bamboo biochars were greater, while pinewood biochars showed similar properties, consistent with more homogeneous charring temperatures. View Full-Text
Keywords: top-lit updraft; TLUD; charring temperature; cation exchange capacity; available water content; biochar top-lit updraft; TLUD; charring temperature; cation exchange capacity; available water content; biochar
►▼ Show Figures 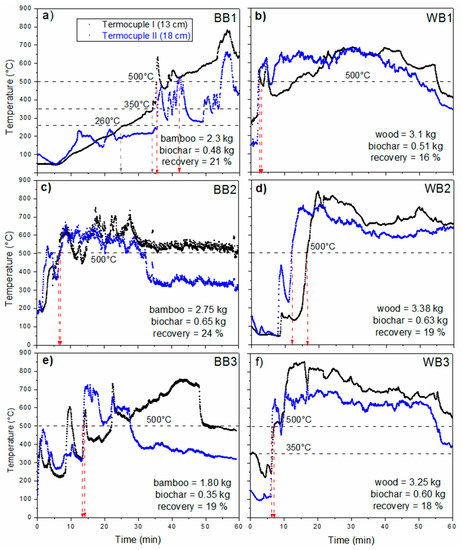