Stearic Acid, Beeswax and Carnauba Wax as Green Raw Materials for the Loading of Carvacrol into Nanostructured Lipid Carriers

The use of lipid nanoparticles as drug delivery systems has been growing over recent decades. Their biodegradable and biocompatible profile, capacity to prevent chemical degradation of loaded drugs/actives and controlled release for several administration routes are some of their advantages. Lipid nanoparticles are of particular interest for the loading of lipophilic compounds, as happens with essential oils. Several interesting properties, e.g., anti-microbial, antitumoral and antioxidant activities, are attributed to carvacrol, a monoterpenoid phenol present in the composition of essential oils of several species, including Origanum vulgare, Thymus vulgaris, Nigellasativa and Origanum majorana. As these essential oils have been proposed as the liquid lipid in the composition of nanostructured lipid carriers (NLCs), we aimed at evaluating the influence of carvacrol on the crystallinity profile of solid lipids commonly in use in the production of NLCs. Different ratios of solid lipid (stearic acid, beeswax or carnauba wax) and carvacrol were prepared, which were then subjected to thermal treatment to mimic the production of NLCs. The obtained binary mixtures were then characterized by thermogravimetry (TG), differential scanning calorimetry (DSC), small angle X-ray scattering (SAXS) and polarized light microscopy (PLM). The increased concentration of monoterpenoid in the mixtures resulted in an increase in the mass loss recorded by TG, together with a shift of the melting point recorded by DSC to lower temperatures, and the decrease in the enthalpy in comparison to the bulk solid lipids. The miscibility of carvacrol with the melted solid lipids was also confirmed by DSC in the tested concentration range. The increase in carvacrol content in the mixtures resulted in a decrease in the crystallinity of the solid bulks, as shown by SAXS and PLM. The decrease in the crystallinity of lipid matrices is postulated as an advantage to increase the loading capacity of these carriers. Carvacrol may thus be further exploited as liquid lipid in the composition of green NLCs for a range of pharmaceutical applications. View Full-Text
Keywords: carvacrol; stearic acid; beeswax; carnauba wax; nanostructured lipid carriers; crystallinity carvacrol; stearic acid; beeswax; carnauba wax; nanostructured lipid carriers; crystallinity
►▼ Show Figures 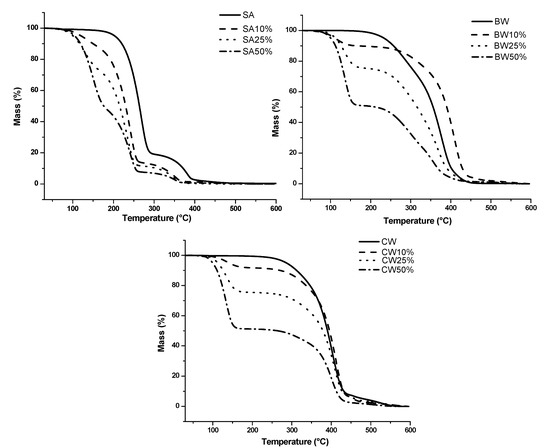