SARS-CoV-2 propagation in the world has led to rapid growth and an acceleration in the discoveries and publications of various interests. The main focus of a consistent number of studies has been the role of angiotensin-converting enzyme 2 (ACE2) in binding the virus and its role in expression of the inflammatory response after transmission. ACE2 is an enzyme involved in the renin–angiotensin system (RAS), whose key role is to regulate and counter angiotensin-converting enzyme (ACE), reducing the amount of angiotensin II and increasing angiotensin 1–7 (Ang1–7), making it a promising drug target for treating cardiovascular diseases. The classical RAS axis, formed by ACE, angiotensin II (Ang II), and angiotensin receptor type 1 (AT1), activates several cell functions and molecular signalling pathways related to tissue injury and inflammation. In contrast, the RAS axis composed of ACE2, Ang1–7, and Mas receptor (MasR) exerts the opposite effect concerning the inflammatory response and tissue fibrosis. Recent studies have shown the presence of the RAS system in periodontal sites where osteoblasts, fibroblasts, and osteoclasts are involved in bone remodelling, suggesting that the role of ACE2 might have a fundamental function in the under- or overexpression of cytokines such as interleukin-6 (IL-6), interleukin-7 (IL-7), tumour necrosis factor alpha (TNF-α), interleukin-2 (IL-2), interleukin-1 beta (IL-1β), monocyte chemoattractant protein-1 (MCP-1), and transforming growth factor-beta (TGF-β), associated with a periodontal disorder, mainly during coinfection with SARS-CoV-2, where ACE2 is underexpressed and cannot form the ACE2–Ang1–7–MasR axis. This renders the patient unresponsive to an inflammatory process, facilitating periodontal loss. View Full-Text
Keywords: periodontitis; COVID-19; ACE2; cytokines; inflammation periodontitis; COVID-19; ACE2; cytokines; inflammation
►▼ Show Figures 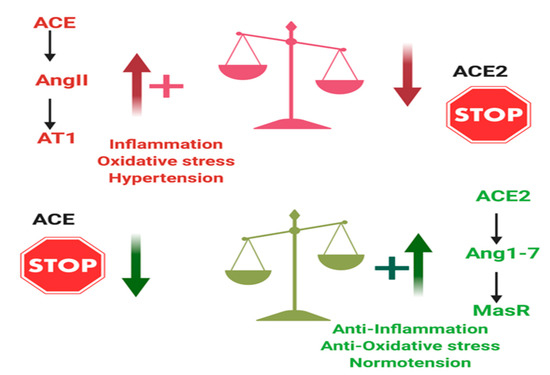