Aim: This study aimed to assess the action of a chlorhexidine-based brush-on gel application in the treatment of plaque-related gingivitis. Methods: The enrollment involved consecutive patients diagnosed with plaque-induced gingivitis. Each participant’s full mouth plaque score and gingival index were recorded at the first appointment (t0) and at follow ups after 1 week (t1), 2 weeks (t2) and 3 weeks (t4). All patients were randomly sorted into two groups: A study group, who was given instruction to brush their gums daily with a chlorhexidine gel, and a control group who received a placebo gel. The two groups’ data at baseline were compared using a chi-square test, while the t-Student and Mann–Whitney tests were employed to analyze the index’s trends, both separately and compared. Results: In total, 30 patients were enrolled, 15 referring to the study group and 15 to the control group. The study group had an 87% decrease in their plaque score and an 84% decrease in their gingival index (p < 0.05). The control group displayed a reduction in plaque score and gingival index of 74% and 84%, respectively (p < 0.05). The plaque score decreased statistically more significantly in the study group than in the control group. Conclusion: Topical employment of a chlorhexidine-containing brush-on gel appears to be a useful home tool in the treatment of plaque-induced gingivitis, associated with professional debridement. View Full-Text
Keywords: gingivitis; chlorhexidine; oral hygiene; topical gel gingivitis; chlorhexidine; oral hygiene; topical gel
►▼ Show Figures 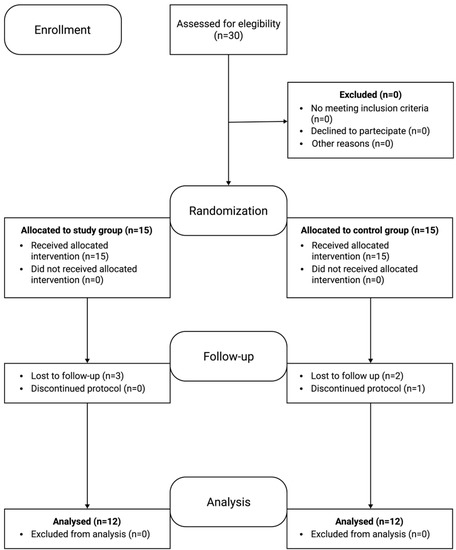