Multiphysics problems represent an open issue in numerical modeling. Electromagnetic launchers represent typical examples that require a strongly coupled magnetoquasistatic and mechanical approach. This is mainly due to the high velocities which make comparable the electrical and the mechanical response times. The analysis of interacting devices (e.g., a rail launcher and its feeding generator) adds further complexity, since in this context the substitution of one device with an electric circuit does not guarantee the accuracy of the analysis. A simultaneous full 3D electromechanical analysis of the interacting devices is often required. In this paper a numerical 3D analysis of a full launch system, composed by an air-core compulsator which feeds an electromagnetic rail launcher, is presented. The analysis has been performed by using a dedicated, in-house developed research code, named “EN4EM” (Equivalent Network for Electromagnetic Modeling). This code is able to take into account all the relevant electromechanical quantities and phenomena (i.e., eddy currents, velocity skin effect, sliding contacts) in both the devices. A weakly coupled analysis, based on the use of a zero-dimensional model of the launcher (i.e., a single loop electrical equivalent circuit), has been also performed. Its results, compared with those by the simultaneous 3D analysis of interacting devices, show an over-estimate of about 10–15% of the muzzle speed of the armature.
Keywords: air-core pulsed alternator; electromagnetic rail launcher; coupled analysis; computational electromagnetics; integral formulations air-core pulsed alternator; electromagnetic rail launcher; coupled analysis; computational electromagnetics; integral formulations

4.1. Description of the Devices

Figure 8 shows a snapshot of the graphical interface of EN4EM showing a 3D view of the whole system taken at the instant of firing. Figure 9 focuses on the discretization of the rail launchers; for the sake of readability, only a limited number of the branches used to model the sliding contacts (i.e., those related to elements in effective contact) are shown.
The details of the geometries of both the devices are reported in Table 2. The compulsator is a two-poles, single-phase machine. The stationary exciting coils have 25 turns each; they are fed with a direct current of 36 kA, capable to produce a magnetic flux density of 3T in correspondence of the armature coils. The discontinuous stationary shield is aluminum made. The axial length of the compulsator is 50 cm. The two armature coils are copper made, series connected and constituted of four turns each. They are positioned on the rotor. All the active components (field coils, armature coils, and shield) span an angle of 150°.
The snapshots of the 3D views of the active parts of the compulsator are shown in Figure 10. The whole device is built by arranging two items of each of the shown components according to the layout in Figure 3b.
At the instant of firing the magnetic axis of the field and of the armature coils are aligned, while the center of the shield is rotated (with respect to the scheme shown in Figure 3 of 60° in the direction of the motion of the rotor [29]. The launcher has copper rectangular rails and a C-shaped armature. The oblique side of the armature forms an angle of 45° with the direction of the rails as shown in Figure 9.
In the light of the discussion in Section 2, the numerical model is able to take into account the relevant components and phenomena in both the compulsator and the rail.
In particular, for the air-core compulsator: (1) the complex armature winding scheme; (2) the presence of excitation/control circuits; (3) the eddy currents in all the conducting parts of the machine (the shield, the shaft, and so forth); (4) the compensating windings of different shapes and arrangements (aluminum sheet, single shorted turns, and so forth.); (5) real winding turns connections; (6) end-turn effects; (7) relative angular velocity between conductors [29]. For the rail launcher: (8) the sliding contacts and the related the velocity skin effect; (9) the current distribution in the solid armature and in the rails [20].
Finally, the numerical formulation can model centrifugal forces and vibrations acting on the shaft of the compulsator due to electric and mechanical unbalances or to misalignments of the shaft from its centered position, as well as the full 3D electromechanical transient behavior of the machine during the real operating conditions.

The use of lumped equivalent circuits in modeling the coupled electro-mechanical behavior of a rail launcher and its feeding compulsator may produce results whose accuracy is not always satisfactory. The causes are due to the presence of eddy currents in the compensation shield of the compulsator and in the uneven current distribution in the rails and in the armature of the launcher. Coupled 3D electro-mechanical analysis is needed if accurate results are required. The paper has compared the results by the strong and the weak interaction analysis by the research code EN4EM. The availability of such a numerical tool could represent a valuable resource in the design of the launcher and of its feeding compulsator since it allows to determine the more important parameters of the launch.
In particular, it will be possible to prepare a look-up table to arrange the operative parameters of the compulsator (e.g., the excitation current, the initial speed of the rotor, its angular position at the instant of firing) to achieve a designed muzzle speed on a given payload.

The authors would like to thank the NVIDIA’s Academic Research Team for the donation of two NVIDIA Tesla K20c GPUs that have been extensively exploited for the simulations. 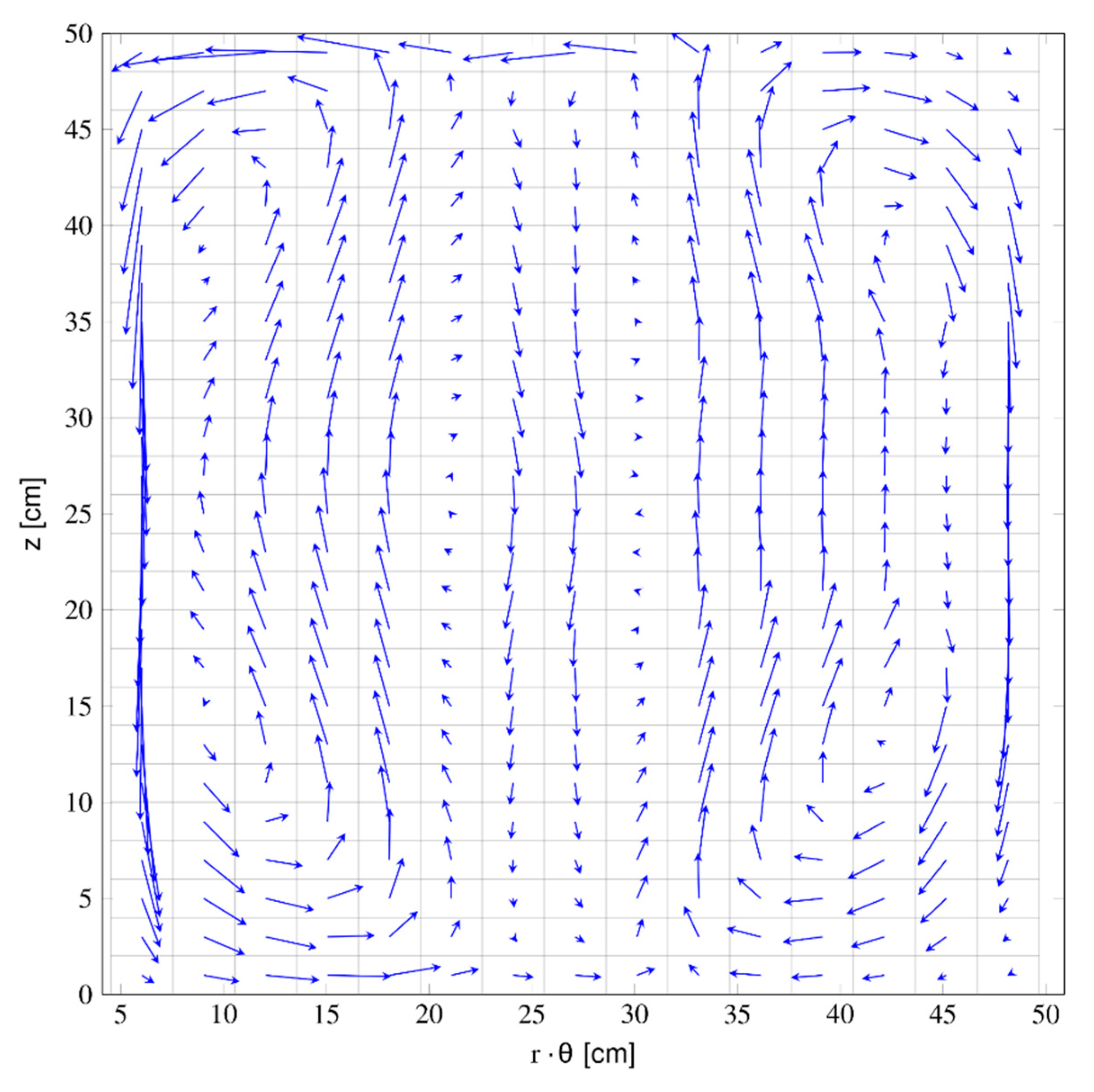 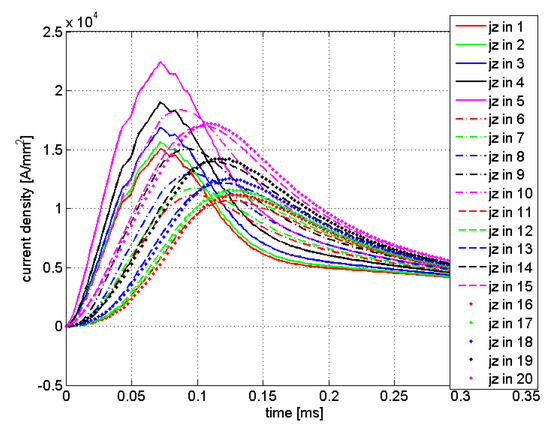 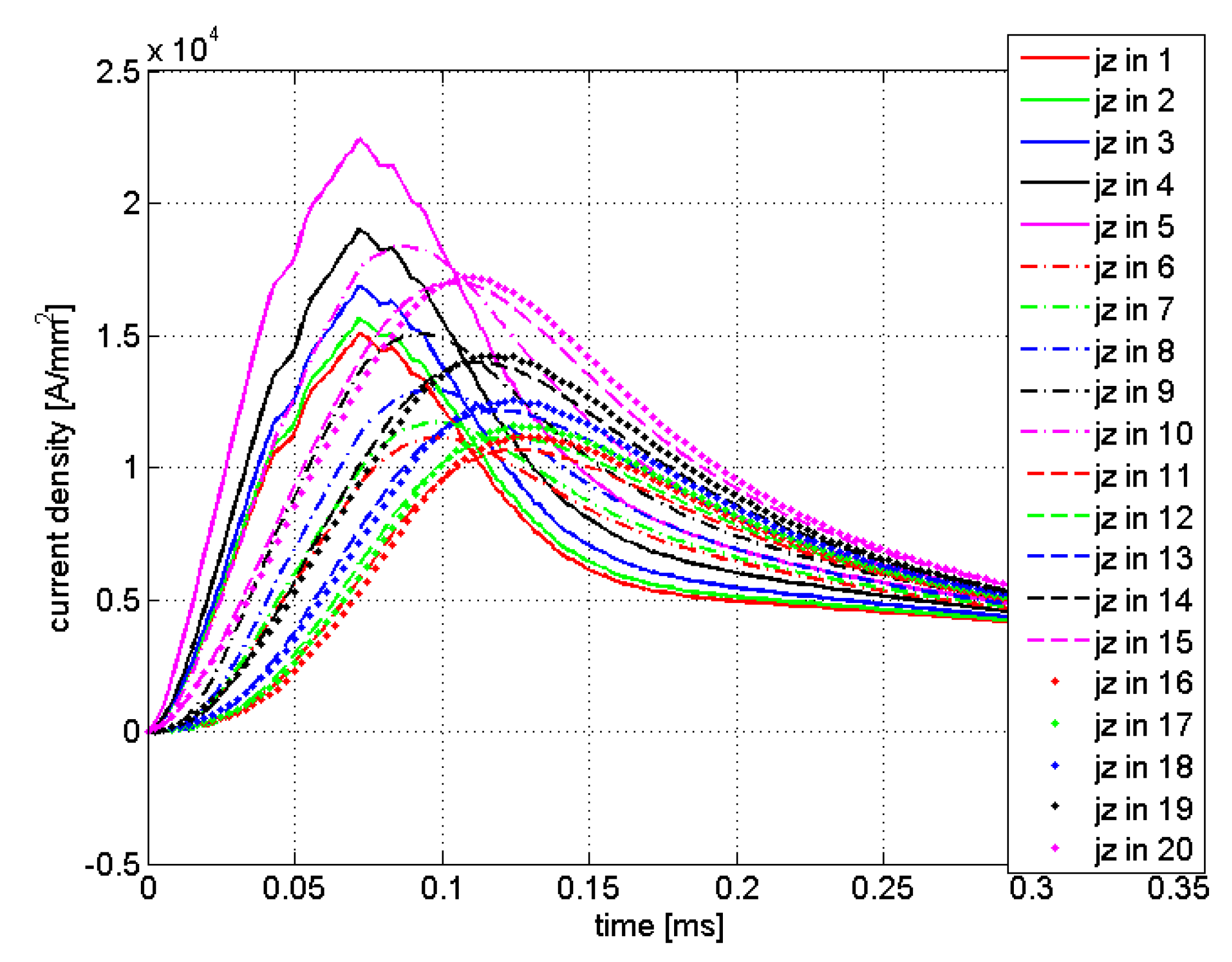 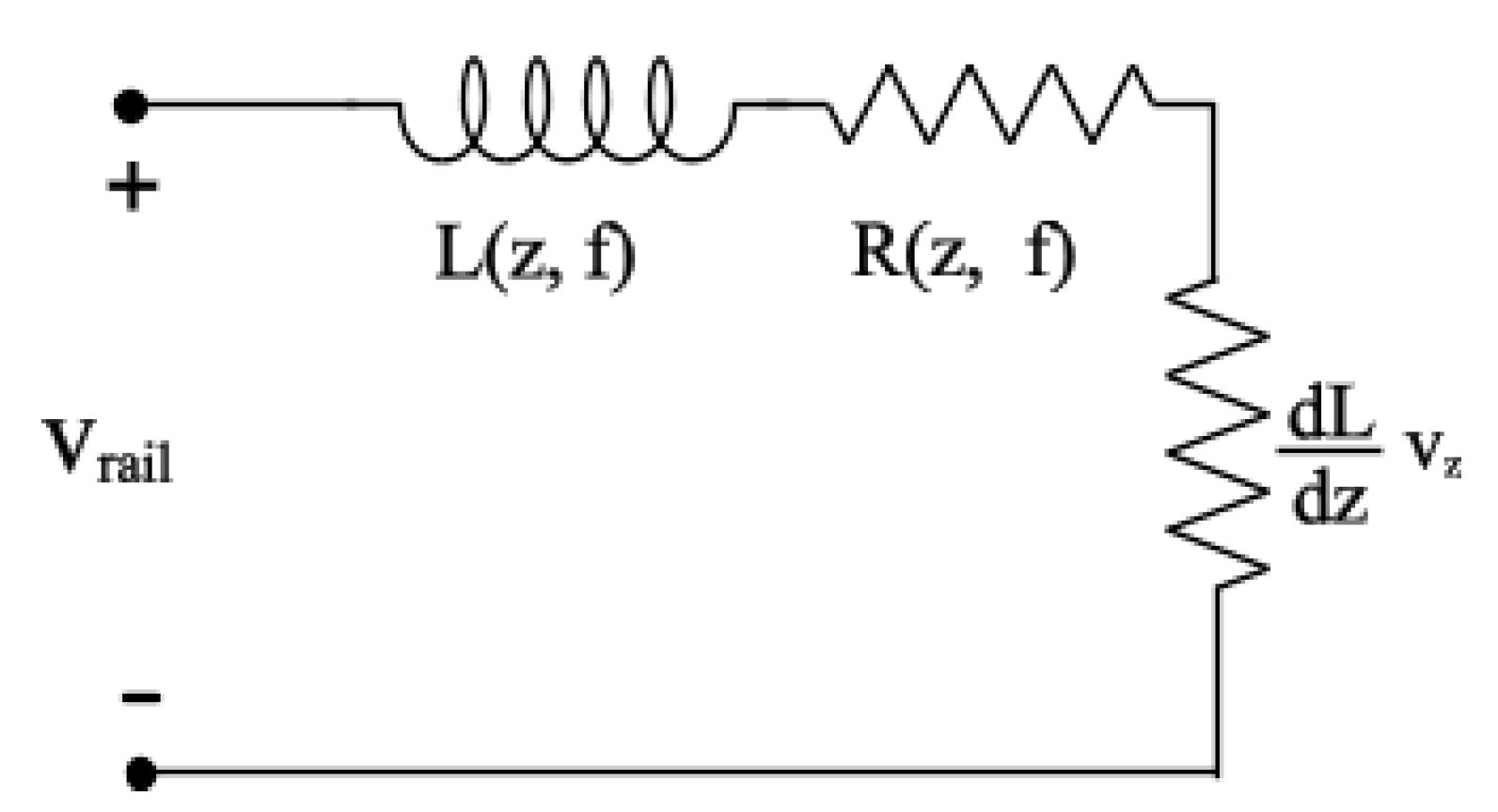 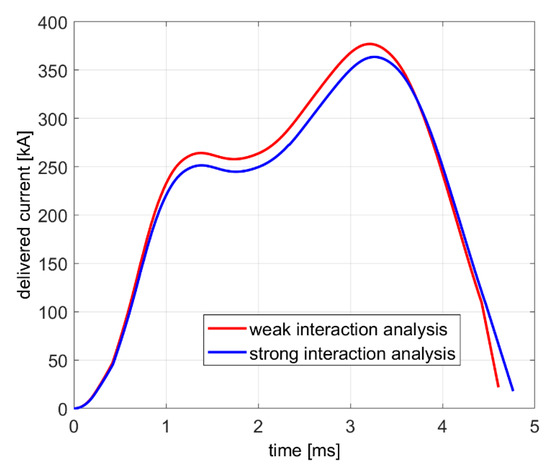 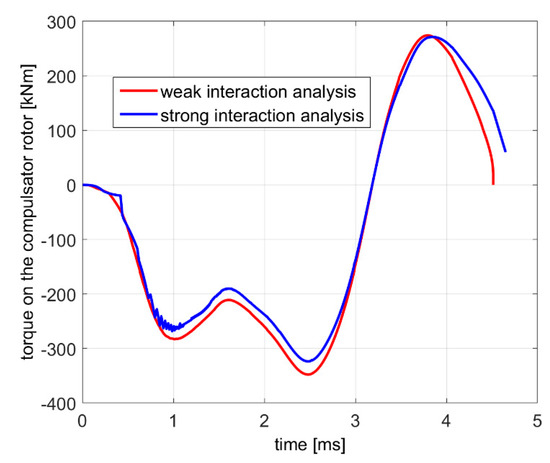 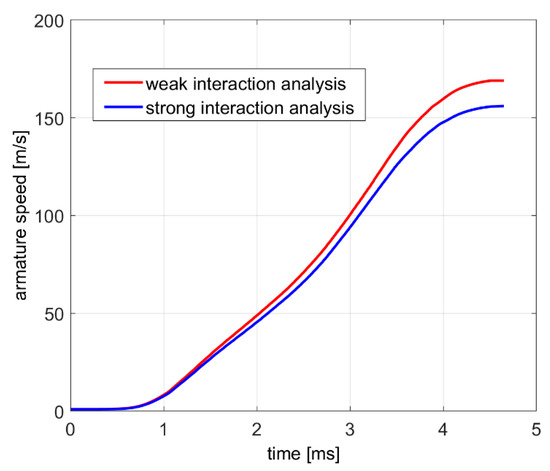 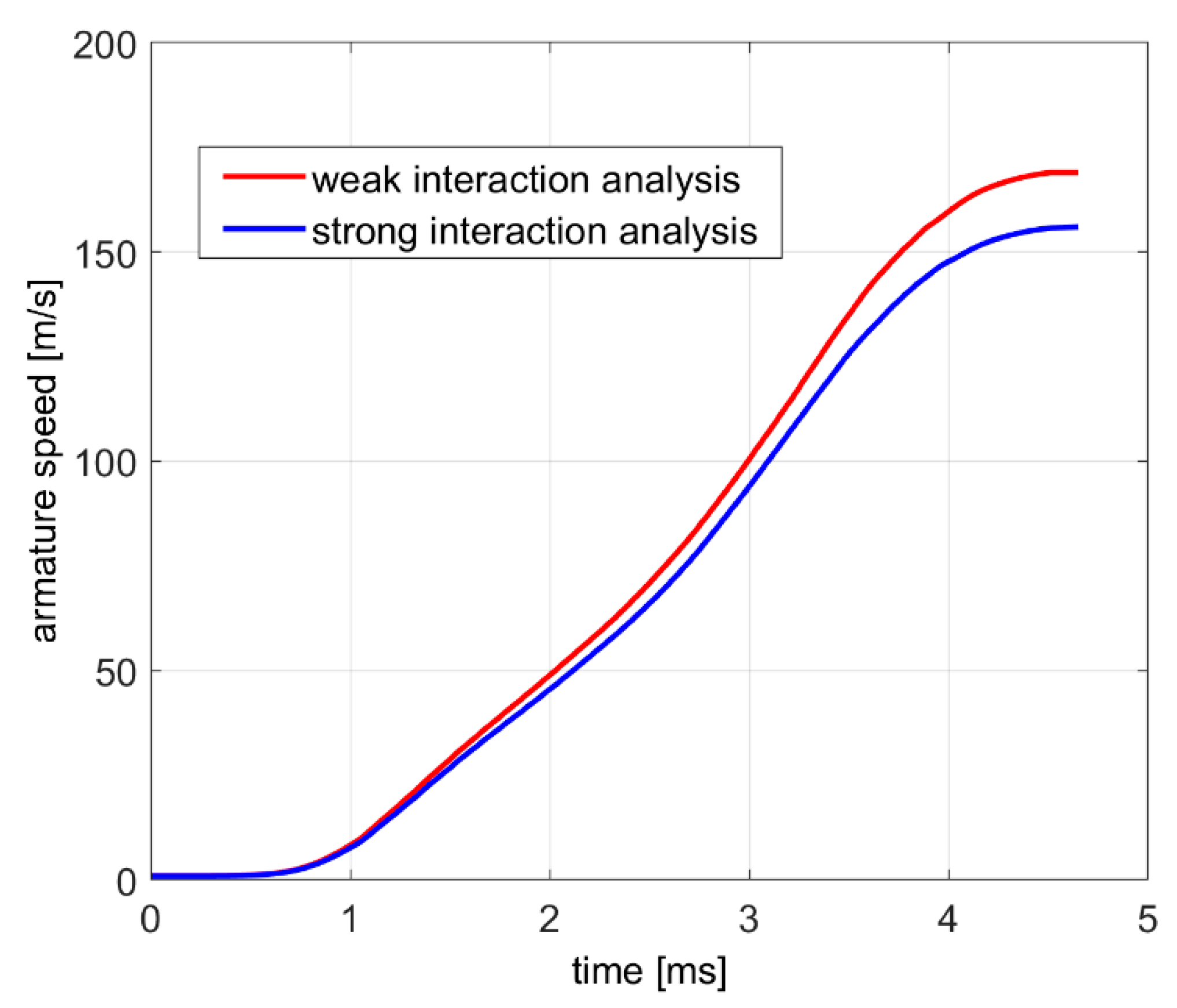 Table 2. Description of the devices.
Table 2. Description of the devices.
© 2020 by the authors. Licensee MDPI, Basel, Switzerland. This article is an open access article distributed under the terms and conditions of the Creative Commons Attribution (CC BY) license (http://creativecommons.org/licenses/by/4.0/).
We use cookies on our website to ensure you get the best experience. Read more about our cookies here.
Accept
We have just recently launched a new version of our website. Help us to further improve by taking part in this short 5 minute survey here. here.
Never show this again