:
Vibrotactile feedback is a key feature of many modern touch displays, which greatly enhances user experiences when interacting with an onscreen interface. Despite its popularity in small touch screen devices, this haptic feature is absent in most large displays due to a lack of suitable actuators for such applications. Thus, a growing need exists for haptic actuators capable of producing sufficient vibrations in large touch displays. This study proposes and evaluates a novel electrostatic resonant actuator (ERA) with a moving mass and dual electrodes for increased vibration feedback intensity. The dual-electrode ERA was fabricated along with a comparable single-electrode ERA to investigate the effect of the electrode configuration on the maximum vibration intensity. When measured directly on the mass, the maximum vibration intensity of the dual-electrode actuator increased by 73% compared to the single-electrode actuator. When mounted and measured on a mock panel, the maximum vibration intensity of the dual-electrode actuator increased by nearly 65% compared to a similarly mounted single-electrode actuator. These results show that the dual-electrode configuration can significantly increase the vibration intensity when compared to the conventional ERA. This demonstrates a promising potential for the use of the proposed actuator for generating vibrotactile feedback in large touch displays.
Keywords:
haptic actuator; electrostatic actuator; vibrotactile; haptic feedback

This section offers descriptions of the working principle of the newly proposed dual-electrode electrostatic resonant actuator and the design overview. The main components of the proposed actuator module include the inertial, grounded mass in the center of the module, and, on either side of the mass, a spacer and an electrode. Figure 2 shows an exploded view and working principle design of the ERA module. Unlike traditional electrostatic actuators, it incorporates a moving mass, which is grounded electrically, in the module to increase vibration intensity. This mass is suspended between an upper and lower electrode through radial beam springs. A small air gap separates the mass and either electrode, allowing the mass to displace up and down when an electrostatic force is generated upon the application of high voltage inputs. When an electrode is charged with a high voltage input, a capacitance is created between the grounded mass and the electrode. Because the electrodes are fixed, the mass is pulled into the housing where the electrodes are attached. When the mass gets displaced, the radial beam springs create a restoring force that pulls it back towards the equilibrium position. This rapid change of forces causes the mass to oscillate, making the actuator vibrate.
The stainless-steel grounded mass in the module acts as a neutral conductive object while the electrodes act as electrically charged objects. When the electrodes are charged with a high voltage input, an electrical force attracts the mass to the electrodes. The equation for the electrostatic attraction force between the mass and a single (top or bottom) electrode is [16]: where is the relative permittivity of air, is the vacuum permittivity, A is the area, V is the input voltage, is air gap distance, is the thickness of the dielectric film, and is the relative permittivity of the dielectric film. The values for each parameter can be found in Table 1.

Two prototype actuators were fabricated to study the effect that electrode configuration has on the vibration intensity of the electrostatic resonant actuator module. Both actuators are proof-of-concept designs, made primarily to study the effect of adding an electrode above the mass. The dual-electrode ERA consists of five main parts: the lower electrode, the lower spacer, the inertial mass and spring, the upper spacer, and the upper electrode. Ten thin radial beam springs surround the center of the middle plate, creating a restoring force to the mass as it displaces away from its equilibrium position. This plate also has a protrusion that is used to wire the mass to electrical ground. A finite element method (FEM) simulation was performed to select the spring constant of the radial springs (see Figure 3a). A force of 2 N was applied to the mass, resulting in a maximum displacement of 0.1166 mm. Using the given size and mass constraints, the spring stiffness was selected to be 17.15 kN/m.
In Figure 3b, each component of the actuator is separated, and its fabrication material is shown. The surface of each copper electrode closest to the mass is covered in a very thin layer of polyimide film to insulate them. The rest of the electrode is surrounded by a thicker layer of polyimide film to further insulate and support them. A stainless-steel spacer (thickness of 0.3 mm) is placed between each electrode and the mass at its equilibrium, creating an air gap, or rattle space, for the mass. The component containing the radial beam springs is a 0.5-mm-thick stainless steel plate. A stainless-steel cylinder was welded onto the center of the plate, providing significantly more mass, to increase vibration intensity. The complete assembled dual-electrode ERA is seen in the lower-left corner of Figure 3b. The single-electrode ERA was fabricated in the same manner but does not have a top electrode or spacer.
The values of key parameters for fabricating the ERA module are summarized in Table 1. The fabricated ERA’s overall dimensions are 52.5 mm × 60.5 mm × 3 mm. The small size makes it able to be installed on the backs of large touchscreen displays, providing effective vibrotactile haptic feedback. Moreover, multiple ERAs can be mounted over the large display surface to create various vibrotactile patterns and to enhance the overall intensity of vibrotactile feedback.
To power the electrodes and control the oscillation frequency of the module, a custom controller with a high voltage amplifier was also fabricated. The controller is necessary to alternate the powering of the electrodes in the duel-electrode actuator. The timing between each electrode activation must be accurate and consistent, making the controller highly important for the proper function of the dual-electrode ERA. The high voltage amplifier is necessary to amplify control signal inputs, which are less than 5 volts, producing the high voltage inputs required to effectively power the electrodes and activate the actuator. Figure 4a shows the schematic structure of a circuit diagram for the controller and high voltage amplifier. These are used in combination to provide two alternating high voltage cosine signals of the same frequency to the ERA module. Ensuring that the signals provided to the electrodes are equal in magnitude and frequency is important to produce the optimal vibration performance. For the proposed ERA module, 2 kV is required for each electrode. A portable rechargeable battery, meant to act as the power source for a large touchscreen, transmits an input signal of 2 V to the high voltage amplifier which converts it to the required amount of 2 kV. This in tandem with the custom controller ensures that the ERA module functions properly and has sufficient input power.

Before conducting a comparison study of the actuators, their parameters need to be identified to verify the design and to ensure that they are comparable systems. Thus, this study conducted static and dynamic testing to experimentally determine key parameters, such as the natural frequency, damping ratio, and spring constant. In the static testing, the actuator remained unpowered, and a dynamic mechanical analyzer (DMA) was used to measure the stiffness of the actuator’s radial springs. In the dynamic testing, the actuator was excited to measure the natural frequency and damping ratio. To find the natural frequency of the system, a sine chirp signal was run through each actuator from 50 to 250 Hz over 10 s and the acceleration response was recorded using an accelerometer, seen in Figure 5a. By taking the Fourier transform of the experimental response data, the natural frequency was determined to be around 129 Hz for the single-electrode actuator and around 134 Hz for the dual-electrode actuator. The half-power method was used on the frequency response plots to estimate the damping ratio. The damping ratios for the single-electrode and dual-electrode ERAs were estimated to be 0.0143 and 0.0141, respectively.
Figure 5b shows the dynamic mechanical analysis testing setup. The actuators were mounted onto the DMA machine’s baseplate to secure them during testing. The DMA machine’s driveshaft applied a sinusoidal force input onto the movable mass while measuring its displacement. Using Hooke’s Law, the spring constant of the radial beam springs was calculated to be 16.62 kN/m. Although the actuators were fabricated with identical parameter values, they have slightly different natural frequencies and damping ratios. Small discrepancies in the actual and the theoretical design values were attributed to variations in the thickness of the raw materials and material property changes caused by high precision manufacturing processes, such as the wire-cutting of the slots for the beam springs. Nonetheless, the discrepancies were deemed to be negligible, and the two actuators were considered comparable.

This research was funded by a research grant from the Korea Institute of Oriental Medicine, grant number KSN2012110. 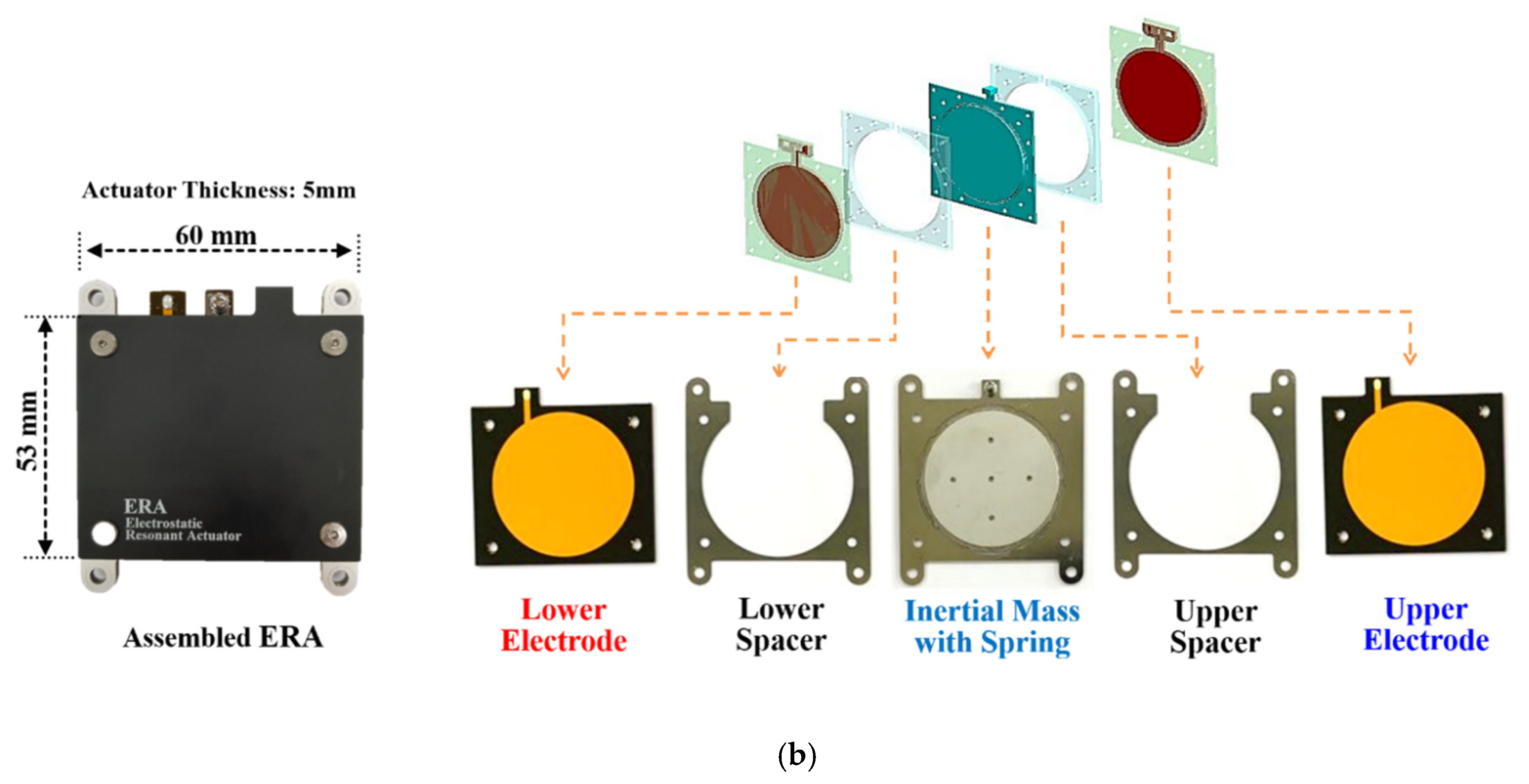 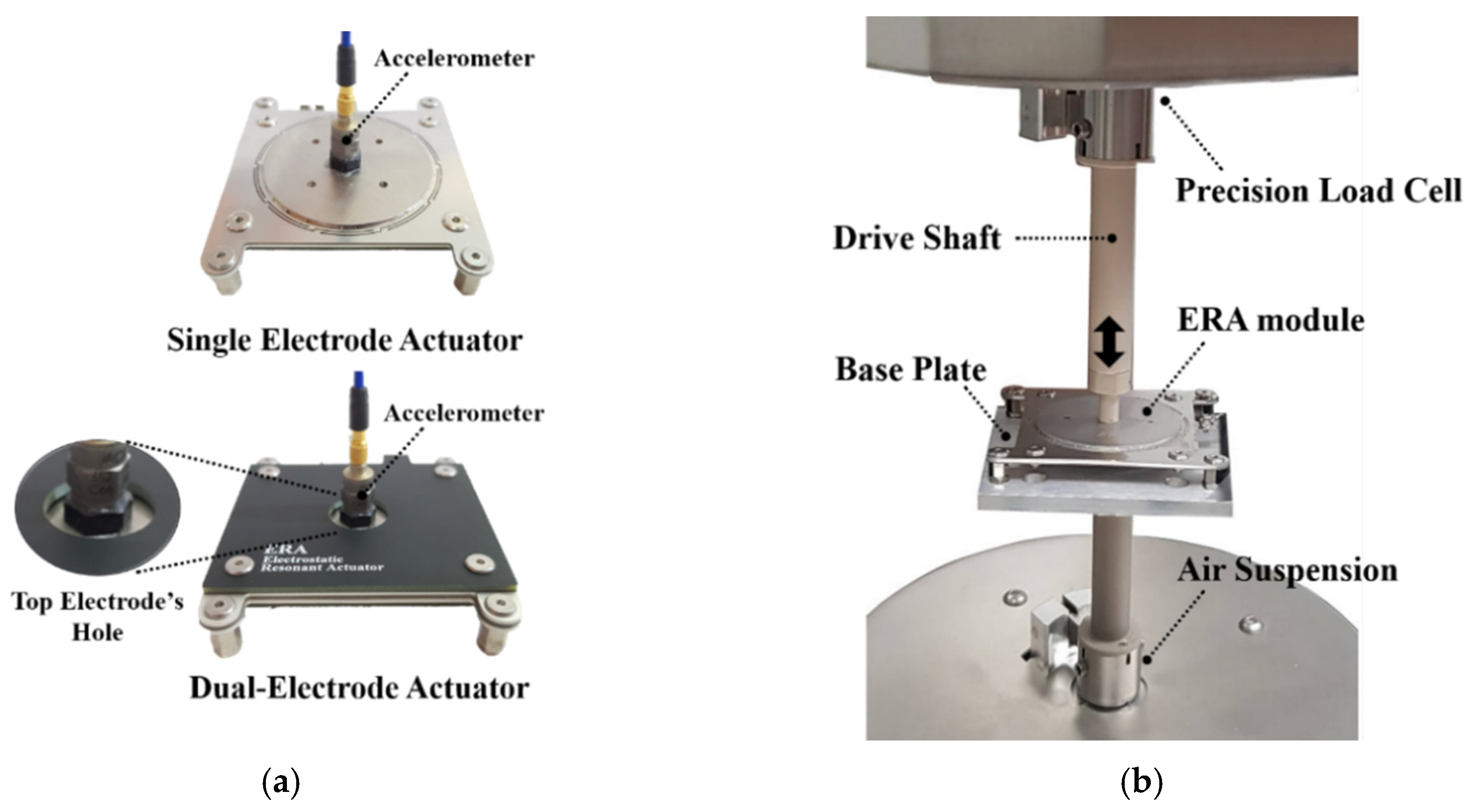