Due to increasingly stringent control policy, air quality has generally improved in major cities in China during the past decade. However, the standards of national regulation and the World Health Organization are yet to be fulfilled in certain areas (in some urban districts among the cities) and/or certain periods (during pollution episode event). A further control policy, hence, has been issued in the 13th Five-Year Plan (2016–2020, hereafter 13th FYP). It will be of interest to evaluate the air quality before the 13th FYP (2015) and to estimate the potential air quality by the end of the 13th FYP (2020) with a focus on the area of an urban district and the periods of severe pollution episodes. Based on observation data of major air pollutants, including SO2 (sulphur dioxide), NO2 (nitrogen dioxide), CO (carbon monoxide), PM10 (particulate matter with aerodynamic diameter equal to or less than 10 μm), PM2.5 (particulate matter with aerodynamic diameter equal to or less than 2.5 µm) and O3 (Ozone), the air quality of Haizhu district [an urban district in the Pearl River Delta (PRD), China] in 2015 suggested that typical heavy pollution occurred in winter and the hot season, with NO2 or PM2.5 as the key pollutants in winter and O3 as the key pollutant in the hot season. We also adopted a state-of-the-art chemical transport model, the Weather Research and Forecasting model coupled with Chemistry (WRF-Chem), to predict the air quality in Haizhu District 2020 under different scenarios. The simulation results suggested that among the emission control scenarios, comprehensive measures taken in the whole of Guangzhou city would improve air quality more significantly than measures taken just in Haizhu, under all conditions. In the urban district, vehicle emission control would account more than half of the influence of all source emission control on air quality. Based on our simulation, by the end of the 13th FYP, it is noticeable that O3 pollution would increase, which indicates that the control ratio of volatile organic compounds (VOCs) and nitrogen oxides (NOx) may be unsuitable and therefore should be adjusted. Our study highlights the significance of evaluating the efficacy of current policy in reducing the air pollutants and recommends possible directions for further air pollution control for urban areas during the 13th FYP. View Full-Text
Keywords: 13th Five-Year Plan; pollution episode; WRF-Chem; emission control scenario; PRD 13th Five-Year Plan; pollution episode; WRF-Chem; emission control scenario; PRD
►▼ Show Figures 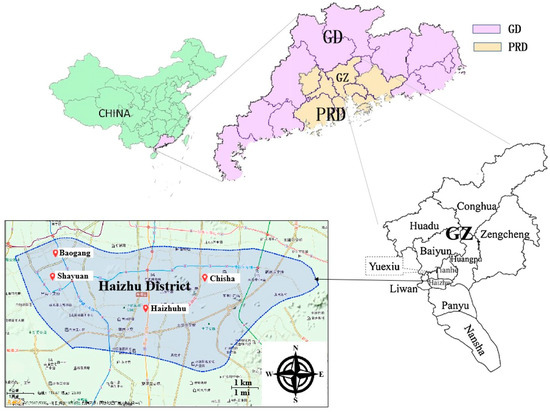