Applying Statistical Analysis and Machine Learning for Modeling the UCS from P-Wave Velocity, Density and Porosity on Dry Travertine

Metal-organic frameworks (MOFs) are porous materials that have attracted much attention in the past two decades due to their tunable structure and pore size. Applications for MOFs have been found in energy storage, chemical separation, chemical sensing, catalysis, and the biomedical field [1,2,3,4,5]. MOFs have been synthesized using many techniques including: slow evaporation, diffusion, direct mixing, solvothermal, ionothermal, sonochemical, mechanochemical, electrochemical, microwave, microfluidic synthesis, and dry-gel conversion [4]. Many of these synthetic methods involve the use of structurally directing solvents such as dimethylformamide, diethylformamide, and dimethylamine (DMF, DEF, and DMA, respectively) which are, however, problematic because they are toxic or carcinogenic [6,7,8,9]. These solvents also cause environmental issues when synthesizing MOFs on an industrial scale because volatile organic compounds are a major source of industrial pollution. As solvent replacement options, ionic liquids (ILs), which are salts that are liquid below 100 °C and possess a negligible vapor pressure making them inflammable, have been successfully used to synthesize MOFs [10,11]. However, many ILs are corrosive, their toxicity to human health and the environment is not well established, and their cost limits their use on an industrial scale [12]. Nonionic surfactants have been widely used as an additive in MOF synthesis, in addition to organic solvents, to affect the crystal size, shape, and surface properties as well as pore morphology. However, only in the last few years have surfactants, mainly polyethylene glycol (PEG), been explored as the main reaction media for MOFs [12,13,14,15,16,17,18,19,20]. Beyond MOF synthesis, polyethylene glycol (PEG) has been employed as an efficient “green solvent” for synthetic chemistry for many years, since it possesses a very low vapor pressure similar to ionic liquids, but is nontoxic and biodegradable [21,22]. PEG can dissolve a wide range of solutes as exemplified in intense recent research to employ PEG as a solvent for multi-component (“one-pot”) synthesis reactions [23,24,25,26,27,28,29,30,31,32,33,34,35,36,37,38,39,40,41,42]. Even mineral salts may be soluble in PEG [43]. Very intriguingly, surfactant-thermal synthesis has provided interesting results in the structure and purification of MOFs. In the reaction between zinc acetate and trimesic acid, with all other reaction conditions the same, varying the surfactant media from PEG 400 to octanoic acid changed the connectivity and crystal structure of the MOFs produced [18]. In another instance, nickel nitrate was reacted with bipyridine and H4L in water and resulted in a mixture of two products. However, when the reaction was repeated in a PEG 400 (400 denotes the average molecular weight) and water mixture, pure product 1 was produced, whereas, in n-octanoate, pure product 2 was produced [19]. These examples demonstrate that utilizing PEG as the reaction medium for MOF synthesis may influence the MOF structure, crystal size and shape, as well as, pore size and shape, all of which are very important for the separating, sensing, storing, and catalyzing ability of MOFs [18,19,44].
Microwave synthesis has also been shown to be a valuable tool in MOF synthesis as well as a synthetic variation that can impact crystal and pore size and shape [1,44]. One of the most widely studied MOFs, (HKUST-1) Cu3(BTC)2, has been synthesized via microwave irradiation under a variety of conditions in traditional solvents [45,46,47,48,49]. Cu3(BTC)2 has also been synthesized at room temperature in surfactants [50]. This study explores the combination of the two environmentally friendly methodologies of using nonionic surfactants and microwave heating for the synthesis of MOFs. A total of five different MOFs (denoted as MOF-1 to MOF-5) have been synthesized and characterized to explore the impact of surfactant-thermal microwave synthesis on their formation and resulting morphologies.

Lead nitrate was purchased from Alfa Aesar Chemicals, copper (II) nitrate trihydrate from Acros Organics, and iron (III) chloride hexahydrate and sodium hydroxide from Fisher Scientific. Trimesic acid (H3BTC), 5-tert-butylisophthalic acid (H2TBiP), Basolite® C300, Basolite® F300, and diethyl ether were purchased from Sigma Aldrich. Basolite® C300 and F300 were stored in a nitrogen filled glovebox between experiments. All other organic solvents were purchased from Pharmco by Greenfield Global. PEG 400 and nonanoic acid were purchased from Acros Organics. PEG 200 and Surfonic® JL 80X were donated by Rochester Midland Corp, who purchased these in large quantities from Dow Chemical Company and Huntsman, respectively. All chemicals were used as received. The exact composition of the polydisperse PEG 200, PEG 400, and Surfonic® JL 80X has been provided elsewhere [51,52].

MOFs containing lead, copper, and iron were synthesized via microwave irradiation in surfactant reaction media. PEG 200 worked well for the lead containing MOF (MOF-1), while with the copper MOFs, PEG 200 led to the formation of visible amounts of CuO and, therefore, PEG 400, Surfonic® JL 80X, or nonanoic acid were used as alternatives. In keeping with the PEG theme, and since PEG 400 was a successful reaction media for the copper MOF synthesis, it was also carried through to the synthesis of the iron MOF (MOF-5). For the lead and copper MOFs, 100% surfactant was used as the reaction medium, while for the iron MOF (MOF-5), a 50/50 wt. % of PEG 400/water mixture was used as the reaction medium. Surfactants in combination with microwave irradiation provided more efficient synthetic conditions, in most cases reducing reaction times from days to hours and eliminating commonly used organic solvents such as DMF.
MOFs 1–5 were each characterized using FT-IR spectroscopy, powder X-ray diffraction, scanning electron microscopy and thermogravimetric analysis. The IR spectrum of MOF-1 is compared to that of 5-tert-butylisophthalic acid in Figure S1, where the disappearance of: the –OH stretching band (3300–2500 cm−1), the normal dimeric carboxylic C=O stretch (1700 cm−1), and the dimeric C-O stretch (1290 cm−1) can be observed as well as the ingrowth of the asymmetric carboxylate stretch at 1538 cm−1. These changes in spectra from neat carboxylic acid to reaction product indicate the 5-tert-butylisophthalate ligand is now bound to the lead ion in MOF-1. A lead 5-tert-butylisophthalic acid MOF was previously synthesized by Liu et al. via conventional heating for 3 days in DMF with the formula, [Pb4(C12H12O4)4(DMF)4] [55]. While the reaction conditions of MOF-1 did not incorporate DMF, the IR spectrum, PXRD, and TGA (Figure 1, Figure 2 and Figure S1), all appear similar to those of [Pb4(C12H12O4)4(DMF)4] [55]. This indicates a [Pb4(C12H12O4)4(solvent)x] like MOF formed from microwave irradiation in PEG 200, either without any coordinating solvents or with water molecules (small amounts present in PEG 200) in place of the DMF molecules. As is expected with microwave irradiation, the crystals of MOF-1 are much smaller than those grown over multiple days by Liu et al. using solvothermal methods (Figure 2) [55]. As shown in Figure 2, aggregates of indistinct small crystals formed in the microwave reaction make it difficult to achieve a single crystal for XRD analysis. TGA analysis of MOF-1 shows thermal stability up to 421 °C (Figure S2).
MOFs 2–4 were synthesized via several different combinations of copper nitrate trihydrate, trimesic acid, and surfactant. The IR spectra of MOFs 2–4 are plotted with commercially available HKUST-1 (Basolite® C300), [Cu3(BTC)2], clearly showing the same vibrational frequencies (Figure S3). PXRD analysis also confirms the structural similarity in spite of the variation in reaction media (Figure 3). The SEM images (Figure 4) of MOFs 2–4 show a difference in morphologies as the surfactant is varied. All form aggregates of microcrystals. MOFs 2 and 3 appear to be the most crystalline, visually. MOF-2 crystal sizes are in the order of ~0.25–1.0 µm, while MOF-3 has slightly larger crystal sizes (~0.5–1.5 µm). MOF-4 displays the smallest surface features, appearing to be the least crystalline. These crystal sizes are smaller than those reported by conventional heating in water and ethanol of ≥20 μm, yet larger than those conventionally synthesized in PEG 400/P104 at 2–3 nm [45,50]. However, the presence of distinct and sharp PXRD peaks, matching those of commercially available Basolite® C300, supports all being crystalline products. MOFs 2–4 demonstrate consistent thermal stability up to 355–360 °C (Figures S4–S6), at which point they degrade to CuO consistent with prior observation by Xue et al. [50].
MOF-5 was synthesized via a combination of iron (III) chloride hexahydrate, trimesic acid, and PEG 400 in addition to water and sodium hydroxide. MOF-5 was the only MOF synthesized here that did not contain a 100% surfactant reaction medium due to the need to adjust the pH using sodium hydroxide solution [53]. The IR spectrum of MOF-5 in Figure S7 is plotted with commercially available amorphous Fe-BTC (Basolite-F300). Both IR spectra in Figure S7 exhibit the same vibrational frequencies. The PXRD analysis of MOF-5 (Figure 5) also confirms the structural similarity to amorphous Fe-BTC (Figure 5) [53]. The SEM images of MOF-5 also confirm the amorphous quality of this product, with no observable crystalline structures (Figure 6). Additionally, TGA analysis of MOF-5 (Figure S8) is consistent with the known decomposition to Fe2O3 at 336 °C [53].

We thank Rochester Midland Corporation for providing several nonionic surfactants. We thank Tom Allston for the collection of thermogravimetric analysis data at the Rochester Institute of Technology Chemical Analysis Lab. 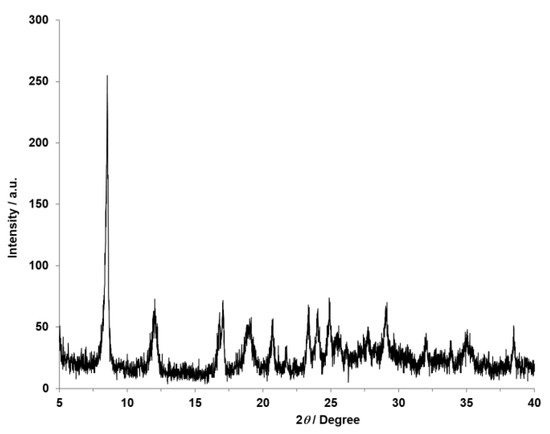 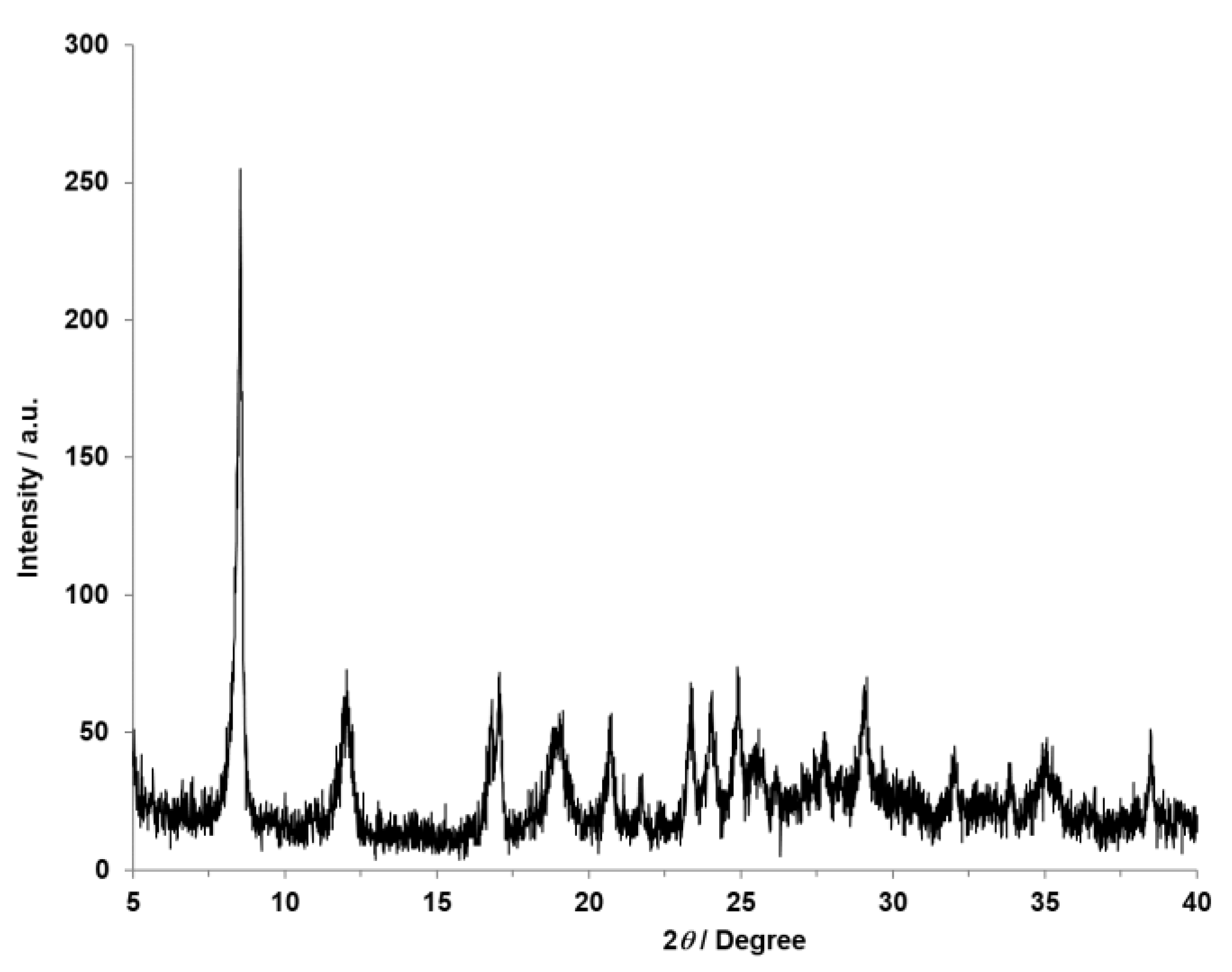 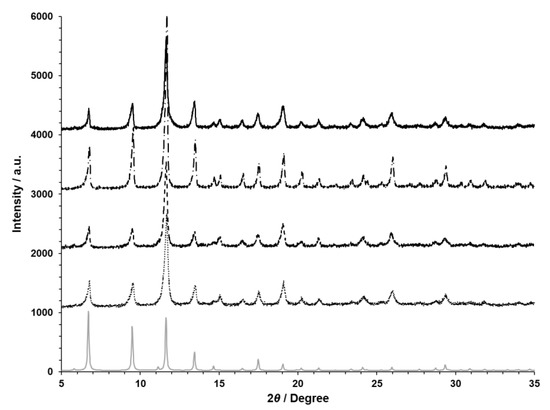 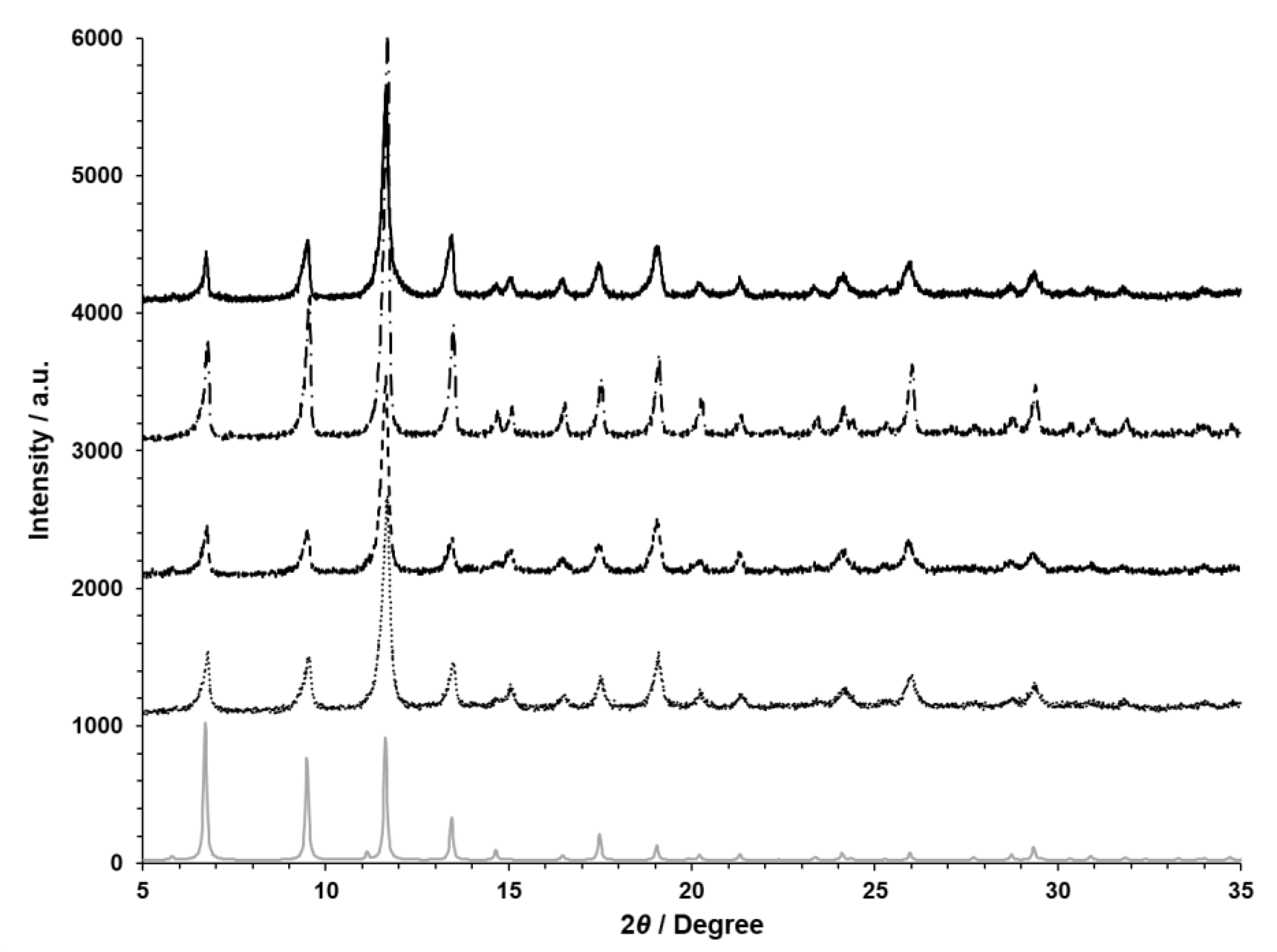 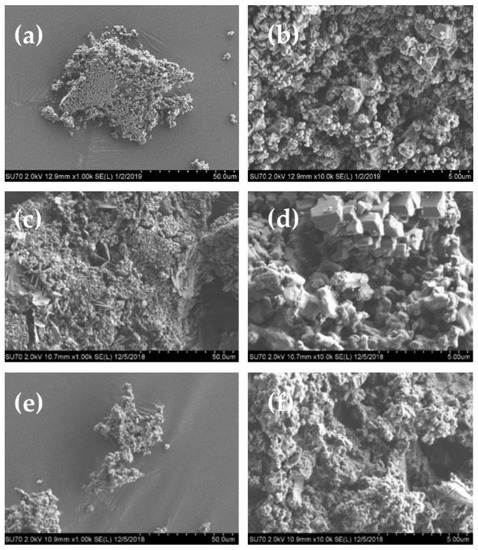 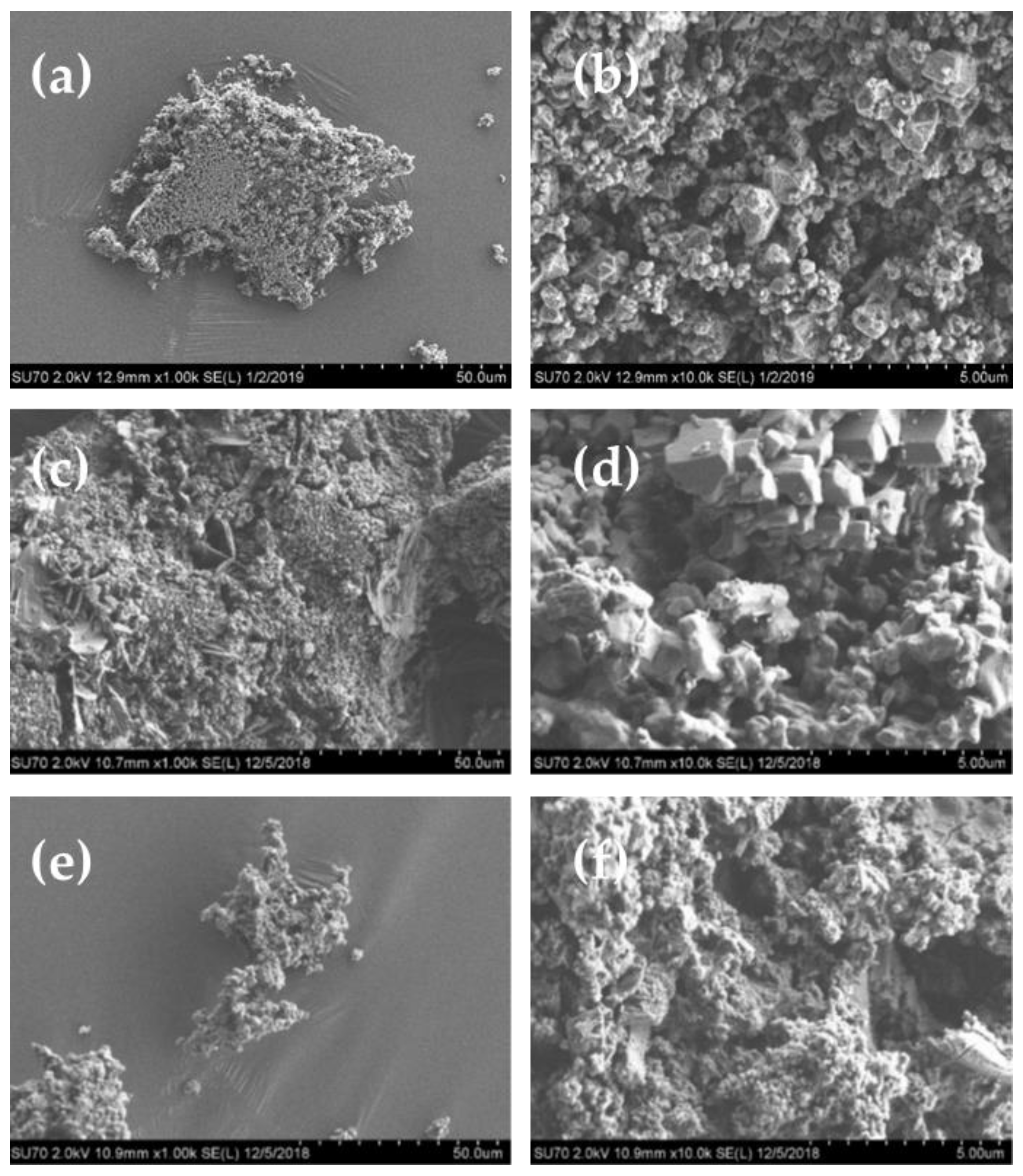 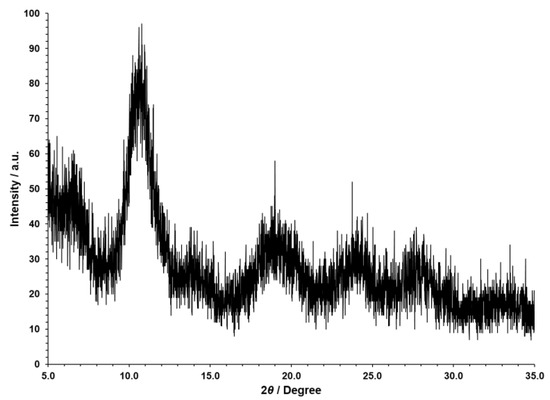 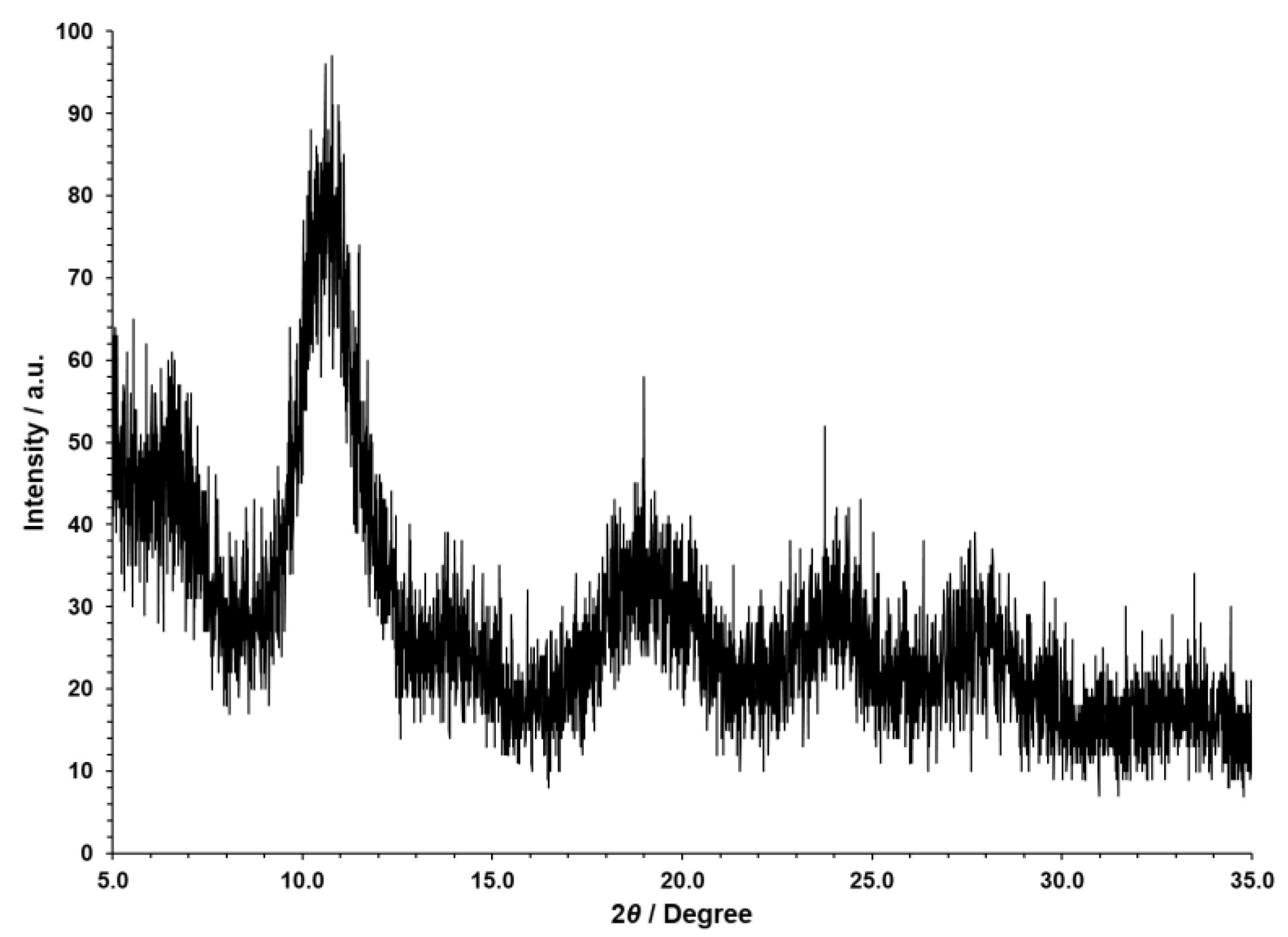