Distribution, Sources, and Risk Assessment of Polycyclic Aromatic Hydrocarbons in the Estuary of Hongze Lake, China
Next Article in Special Issue

Is a Land Use Regression Model Capable of Predicting the Cleanest Route to School?
Previous Article in Special Issue

Anaerobic lagoons are a critical component of confined swine feeding operations. These structures can be modified, using a synthetic cover, to enhance their ability to capture the emission of ammonia and other malodorous compounds. Very little has been done to assess the potential of these covers to alter lagoon biological properties. Alterations in the physicochemical makeup can impact the biological properties, most notably, the pathogenic populations. To this aim, we performed a seasonal study of two commercial swine operations, one with a conventional open lagoon, the other which employed a permeable, synthetic cover. Results indicated that lagoon fecal coliforms, and Escherichia coli were significantly influenced by sampling location (lagoon vs house) and lagoon type (open vs. covered), while Enterococcus sp. were influenced by sampling location only. Comparisons against environmental variables revealed that fecal coliforms (r2 = 0.40), E. coli (r2 = 0.58), and Enterococcus sp. (r2 = 0.25) significantly responded to changes in pH. Deep 16S sequencing of lagoon and house bacterial and archaeal communities demonstrated grouping by both sampling location and lagoon type, with several environmental variables correlating to microbial community differences. Overall, these results demonstrate that permeable synthetic covers play a role in changing the lagoon microclimate, impacting lagoon physicochemical and biological properties. View Full-Text
Keywords: anaerobic lagoons; permeable cover; microbial communities; pathogens; Enterococcus; Escherichia coli anaerobic lagoons; permeable cover; microbial communities; pathogens; Enterococcus; Escherichia coli
►▼ Show Figures 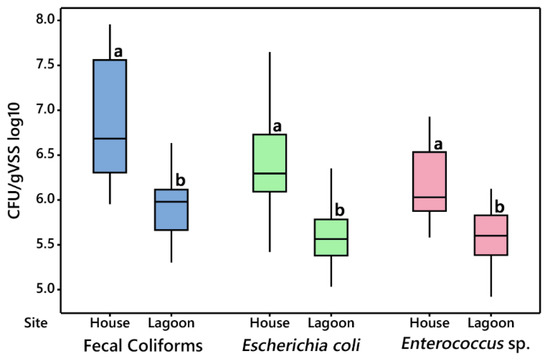