Physicochemical and Bacteriological Analysis of Water Quality in Drought Prone Areas of Pune and Satara Districts of Maharashtra, India
Previous Article in Journal

Optimisation of Growth of Raphidocelis subcapitata Immobilised for Biofuel Production: Influence of Alginate and CaCl2 Concentrations on Growth

The growth of the green microalga Raphidocelis subcapitata in sodium alginate beads was studied. The beads were generated by the extrusion technique, which was followed by gelling in a Ca2+ solution. The alginate concentrations studied were 1%, 1.5% and 2% (w/v), while the concentrations of CaCl2 were 0.2%, 0.5% and 1% (w/v). The growth monitoring of the cells in the beads was performed by dissolving the gel in a sodium phosphate buffer and reading the optical density at 685 nm using a spectrophotometer. The results clearly showed that alginate and divalent Ca2+ ions do not contribute directly to the growth of microalgae but play a decisive role in preserving the integrity of the beads and protecting them from shrinkage. Furthermore, they have an important role in the transfer of nutrients, light and CO2 in the beads. The highest growth (3.92 × 106 ± 0.39 cells/bead) was obtained with the concentrations of alginate being 1.5% and CaCl2 being 0.2%. However, the beads began to shrink and this resulted in the cells being released into the culture medium after the 8th day. Of all the combinations studied, the combination of 2% alginate and 1% CaCl2 was the best because it ensured the stability of the beads during the 10 days of culture and resulted in a low concentration of free cells detected in the culture medium. These concentrations were determined as the optimal conditions for the immobilization of microalgae and will be used in the following work. View Full-Text
Keywords: alginate; CaCl2; beads; Raphidocelis subcapitata; growth alginate; CaCl2; beads; Raphidocelis subcapitata; growth
►▼ Show Figures 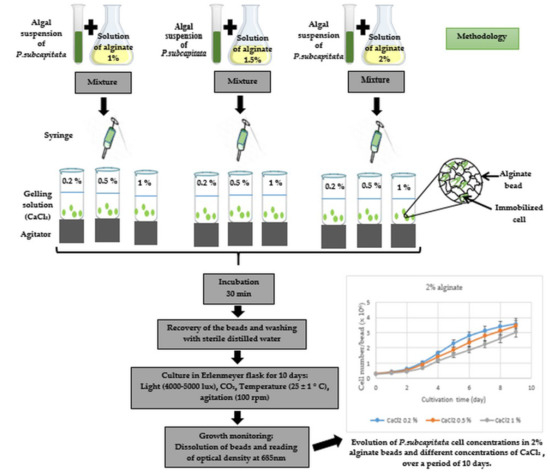