Origin and Background Estimation of Sulfur Dioxide in Ulaanbaatar, 2017

Particulate matter studies have been conducted regularly in the capital city of Mongolia. In contrast, studies related to the source and general estimation of levels of sulfur dioxide (SO2) over whole years are lacking. To explore the yearly trend in SO2, whole-year data of air pollutants were obtained from the Air Pollution Reducing Department. The results showed that the annual average concentration of SO2 was 32.43 µg/m3 at the Amgalan official monitoring station in 2017, which changed from 53 µg/m3 in 2016, representing a reduction of around 40%. The back-trajectory model and the National Oceanic and Atmospheric Administration (NOAA)’s hybrid single particle Lagrangian integrated trajectory model (HYPSLIT) were used to determine the source of SO2. A total of 8760 backward trajectories were divided into eight groups. The results showed that 78.8% of the total trajectories in Ulaanbaatar came from an area inside Mongolia. The results showed that pollutants enter Ulaanbaatar mainly from the northwest and north during the winter season. There are industrial cities, such as Darkhan and Sukhbaatar, in North Mongolia. Air pollutants created in the industrial area traveled into Ulaanbaatar during the winter season. View Full-Text
Keywords: sulfur dioxide concentration; back-trajectory; NOAA HYPSLIT model sulfur dioxide concentration; back-trajectory; NOAA HYPSLIT model
►▼ Show Figures 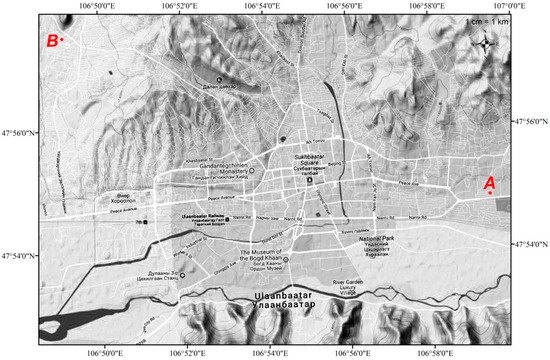