Nausea in Specific Phobia of Vomiting
Previous Article in Journal

Psychological Detachment in the Relationship between Job Stressors and Strain

Traumatic brain injury (TBI) often leads to pervasive emotional and cognitive changes, including increases in boredom and depression, and decreases in motivation [1,2,3,4]. A great deal of research, including work from our own lab, has shown a consistent and strong relationship between the constructs of boredom and depression [5,6,7]. Importantly, we recently showed that although the two experiences are highly correlated (r = 0.72), they can be shown to be psychometrically distinct [6].
Work in our lab has also shown that boredom should not be considered a unitary construct [8]. The Boredom Proneness Scale (BPS) [5], most commonly used to evaluate susceptibility to boredom, has consistently been shown to have two prominent factors that account for the variance on this measure—the internal and external stimulation subscales. It should be noted that the factor structure of the BPS is far from uncontroversial—although many studies have sought to determine the factor structure of the BPS, the data has produced anywhere from two to eight factors [7]. However, the perceived need for either internal or external stimulation represents the two factors most commonly observed in all of these factor analytic studies [7,9]. This distinction harks back to an earlier one made by Greenson [10] between an agitated and an apathetic bored state. In short, the difference between these two states lies in their motivational status. The agitated boredom prone individual experiences boredom as an aggressively dissatisfying state—they are motivated to engage in something pleasurable and stimulating, but every attempt to do so fails to satisfy them. This discrepancy between the desire to be stimulated and a failure to extract that stimulation from the environment leads to a sense of agitation—hence, the so-called agitated boredom prone individual. In contrast, the apathetic boredom prone individual may perceive their environment to be dull and monotonous, but experiences no desire to alter that experience. In other words, the apathetic boredom prone individual sees things as unstimulating, but is not motivated to redress that fact.
Recent work in our lab exploring the relationship between boredom and attention supports the distinction between the agitated and apathetic boredom prone subtypes. Others had already demonstrated a link between boredom and attention, suggesting that lapses in everyday attention (e.g., pouring orange juice on your cereal) and reduced mindfulness actually lead to both boredom and depression [11,12]. In this context, boredom (and potentially depression) arises as a consequence of a disengaged mind—an individual less capable of attending appropriately to their surroundings [12]. Our work found that it was the apathetic boredom prone individual who most prominently showed such lapses in everyday attention. In contrast, the agitated boredom prone individual was insensitive to errors of performance on a sustained attention task [8]. That is, the agitated boredom prone individual did not slow their reaction times on trials subsequent to an error, as would normally be expected [8,13]. This same kind of insensitivity to having made an error is evident in TBI patients [13]. Indeed, there is a wealth of research demonstrating poor sustained attention and concentration in patients with TBI [3,13,14,15,16]. It may be the case that the poor sustained attention evident in TBI will, in turn, lead to increased levels of boredom [11,12].
Given the distinct boredom subtypes discussed above, and the fact that both boredom and depression represent major impediments to rehabilitation [2,17], it is important to investigate whether the commonly observed relationship between the two affective constructs is driven primarily by the need for external or internal stimulation. The current study aimed to explore the relationship between boredom and depression following TBI, a population of patients who report experiencing high levels of both. A priori, we expected the moderate-to-severe TBI group to have the highest BPS scores, given prior research suggesting this population experiences elevated levels of boredom [4]. Furthermore, based on previous results [6], we expected that boredom and depression would be highly correlated in all groups. However, we hypothesized that this relationship would be strongest in the moderate-to-severe TBI group.

Three groups of participants completed this study as part of a larger project exploring the cognitive and emotional correlates of boredom in TBI (Table 1).
Participants in the control group were recruited from the undergraduate population at the University of Waterloo and participated for course credit. Participants in the mild-TBI group were also recruited from this population and had reported on a mass questionnaire administered to all Psychology students that they had previously experienced a concussion. Participants forming the moderate-to-severe TBI group were recruited from the Kitchener-Waterloo, Hamilton and Niagara communities and St. Michael’s Hospital in Toronto. Patients were tested in their homes or in the lab, where possible, and were compensated for their time at a rate of $10 per hour. Injury severity was determined using American Congress of Rehabilitation Medicine criteria, including Glasgow Coma Scale (GCS) scores and length of loss of consciousness (LoC), where available. For inclusion in the mild TBI group, a participant had to have a GCS score greater than or equal to 13 (range was 13 to 15) within at least 30 minutes of injury and an LoC of less than 30 minutes (Table 1). For inclusion into the moderate-to-severe TBI group, participants had to have a GCS scores of less than or equal to 12 and an LoC of greater than 30 minutes (Table 1). In addition, patients describing substantial post-traumatic amnesia (greater than 24 hours) were included in the moderate-to-severe TBI group. All procedures were approved by the University of Waterloo’s Office of Research Ethics, and all participants gave written consent prior to participating.

As part of a larger study, all participants first completed a series of questionnaires, including the Boredom Proneness Scale (BPS), which measures an individual’s susceptibility to experiencing boredom [9]. The 28-item scale includes statements, such as “I find it easy to entertain myself” rated on a 7-point Likert scale. Responses are summed for a total boredom proneness score, ranging from 28 to 196 (higher scores indicate greater boredom proneness). The BPS can be split into two subscales measuring the perceived need for either internal or external stimulation [7,8].

ANCOVA was performed on the BDI-II scores across the three participant groups, controlling for age. Results yielded a significant interaction between participant group and age [F(2, 134) = 4.05, p < 0.05]. Linear regression lines fit to the data yielded significant positive slopes relating age and BDI-II scores in both the control and mild TBI groups and a non-significant negative slope in the moderate-to-severe TBI group. Multiple regression analysis indicated that for the control and mild TBI groups, increased age was associated with higher levels of depressive symptoms. In contrast, for the moderate-to-severe TBI group, there was no such association.

3.3. Relationship between Boredom and Depression 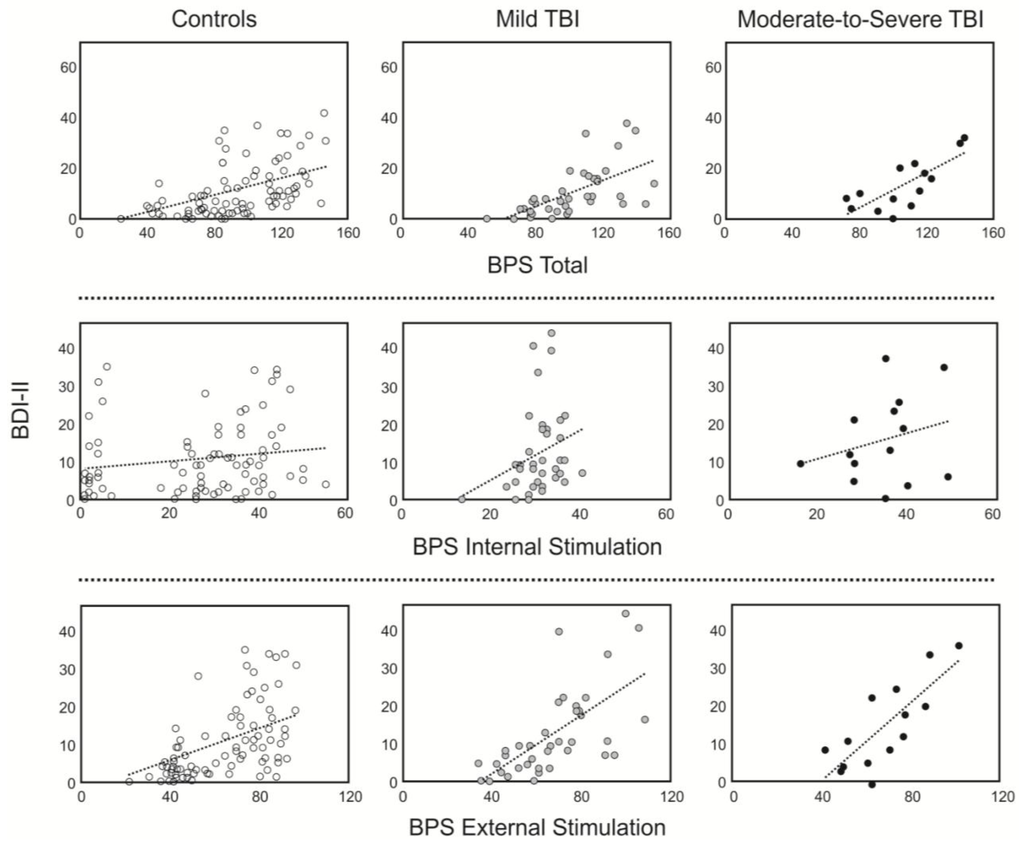 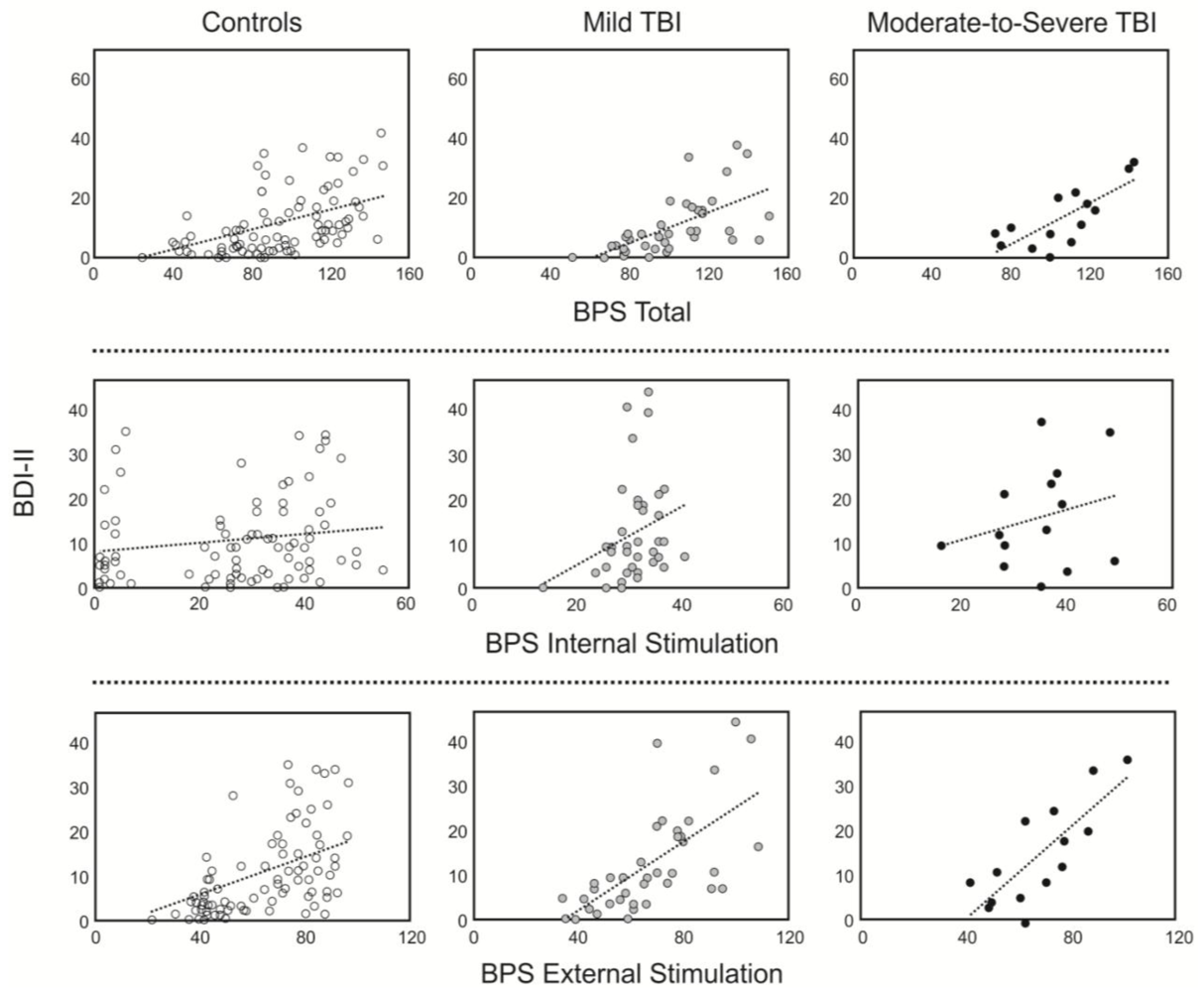 What the current data show is that the relationship between boredom and depression is strongest in patients suffering moderate-to-severe TBI and is driven by a failure to feel stimulated by the external environment. Important future steps in this research include following the evolution of each affective state over time in TBI, as well as employing both structural (e.g., Diffusion Tensor Imaging) and functional neuroimaging techniques to determine the underlying neural bases of boredom and depression in this population.

This work was supported by the Natural Sciences and Engineering Research Council of Canada Discovery Grant awarded to JD.