What Makes a Partner Ideal, and for Whom? Compatibility Tests, Filter Tests, and the Mating Stability Matrix
Previous Article in Journal

Factors which Influence Risk Taking and the Evolution of Social-Identity in Stroke Narratives: A Thematic Synthesis

Participants were 24 young healthy adults (13 women and 11 men). Inclusion criteria were as follows: 1) ≥20 years old; 2) body mass index (BMI) < 25 kg/m2; 3) habitual sleep duration ≥ 5 h, assessed by the Pittsburgh Sleep Quality Index (PSQI) [4]; 4) no use of medication and free of diseases such as diabetes, hypertension or congenital disorders; 5) nonsmoking; 6) no problems sleeping, corresponding to a PSQI score <10; 7) chronotype classified as definitely not an evening type, based on a score >42 on the Japanese version of the morningness–eveningness questionnaire.

This study used a randomized crossover design with a sleep curtailment condition (5 h/night) and a control sleep condition (8 h/night). The procedure for the study is shown in Figure 1. Participants were informed of the order in which they would experience the conditions on the first day of the study. Both conditions lasted for 3 consecutive nights. The washout period between conditions was at least 3 weeks to minimize crossover effects. Women took part in the study within 2 weeks after their menstrual period because appetite and sleepiness are affected by the menstrual cycle [18,19]. Participants were asked to go to bed at the same time as usual on prior day of entering protocol. Participants were free to engage in daily activities as normal, with the exception of sleeping. They were asked to sleep at home from day 1 to day 3, with the wake-up time during the intervention period chosen by participants as being suitable for coming to the laboratory at 8:00 a.m. on day 4. Participants were instructed not to consume drinks containing caffeine or alcohol during the intervention period and not to sleep except during the prescribed sleep period.
On day 1, participants were asked to come to the laboratory at 8:00 a.m., having fasted after getting up. We then collected anthropometric data from the participants, instructed them about the study procedure and asked them to answer questionnaires assessing their habitual sleep patterns, caffeine and alcohol intake, and chronotype. Participants were fitted with two accelerometers to evaluate their physical activity and sleep from 8:00 a.m. on day 1 to 8:00 a.m. on day 4, except while bathing. Participants were asked to go to bed and turn off the lights for a prescribed duration of sleep from day 1 to day 3. On day 4, participants were asked to come to the laboratory at 8:00 a.m. We then collected anthropometric data, assessed their subjective psychological rating, and collected a blood sample from each participant. The sweet taste preference test was conducted at 9:00 a.m., and participants ate breakfast Ad libitum from 9:30 a.m. onwards. The protocol was registered as a randomized controlled trial entitled “The effect of sleep curtailment on appetite and food preference” under the University Hospital Medical Information Network (UMIN) registration number UMIN000028906 and approved by the ethical committee of the Prefectural University of Kumamoto (28–22). All participants gave written informed consent to the purpose, methods, and significance of the study.

Habitual sleep time and sleep quality were assessed using the PSQI. Participants recorded the time at which they went to bed, their wake-up time, nap times, and sleep satisfaction within 10 min of getting up from day 2 to 4 in subjective sleep records. We asked them to record nap times if they involuntarily took a nap that might be possible to occur except while the prescribed sleep period. Sleep satisfaction was assessed using a four-point scale (1 to 4), with the question “How satisfied are you with your sleep last night?” rated as: (1) dissatisfied; (2) a little dissatisfied; (3) a little satisfied; (4) satisfied. Sleep was assessed objectively using a MicroTag accelerometer (MTN-220; ACOS, Nagano, Japan) [20]. Sleep analysis was conducted using SleepSign Act 2.0 (KISSEI COMTEC, Nagano, Japan). Participants were asked to wear the MicroTag accelerometer from 8:00 on day 1 to 8:00 a.m. on day 4, except while bathing.

Anthropometric measurements were conducted at 8:00 a.m. on day 1 and 4, with participants dressed in light clothing, without shoes and socks. Height and weight were measured using a stadiometer with a weight scale (DC-250; Tanita, Tokyo, Japan). BMI was calculated in units of kg/m2.

Blood samples were obtained from the antecubital vein on the morning of day 4 at 8:00 a.m. after participants had been fasting since the last meal of the previous day. Serum biochemistry analysis was conducted by LSI Medience Co. (Tokyo, Japan). Biochemical parameters included active ghrelin (Active Ghrelin ELISA kit; SCETI K.K, Tokyo, Japan) and leptin (Radioimmunoassay; Merck Millipore, MA, USA). The coefficient of variation between samples was within 10%.

At 9:30 a.m. on day 4, Ad libitum food intake was assessed. The temperature in the experimental room was set to 25 °C, and the door was closed. In total, 32 types of food were presented. Ad libitum foods comprised: staple foods (rice, granola, rice casserole, pizza, two kinds of spaghetti, and croissants); main dishes (takoyaki with sauce and mayonnaise, grilled salmon, fried fish, omelette, beef croquette, fried chicken, and fried spring rolls); side dishes (six kinds of daily dishes and three kinds of salads); drinks (milk, and orange juice); and desserts (yogurt, chocolate, vanilla ice cream, chocolate ice cream, and cheesecake). The nutritional component of Ad libitum meals is shown in supplemental table. Participants selected and ate foods alone from 9:30 a.m. onwards. They were instructed to finish eating within 30 min. They were asked to eat as they wished and to continue selecting foods to eat until they were full. The researchers confirmed that no food was left in the dish after participants finished eating. The quantity of foods selected by participants was recorded by the researchers. All interventions were carried out in an identical fashion regarding food portion sizes, foods provided, food layout and the setup of the experimental room.

All data are presented as the mean ± standard deviation. Sleep records were assessed to calculate the mean across 3 nights. Habitual caffeine and alcohol intake before the intervention period were calculated as the intake of each per week. Comparisons between the sleep curtailment condition and the control sleep condition were conducted using a mixed-model ANOVA. The results for blood biochemistry and food intake adjusted for sex and the results for blood biochemistry adjusted for the time of the last meal were assessed using a mixed-model ANOVA. Correlations between food intake, active ghrelin level, and sweet taste preference and between sweet taste preference and subjective desire to sweet were analyzed using the Pearson correlation coefficient. Active ghrelin and the time of last meal from 23 participants were analyzed, because one participant had missing data. The significance level for statistical tests was set at 0.05. All statistical analyses were conducted using IBM SPSS 22.0 (SPSS Inc., Chicago, IL, USA).

Table 1 shows the characteristics of the participants before the intervention. No participants had a chronotype of definitely morning type or definitely evening type. The time of the intervention in women was 6.0 ± 3.3 d after menstruation and did not differ between conditions (p > 0.05). Habitual sleep duration did not differ between men and women (p > 0.05).

Figure 2 shows the preferred concentration of sucrose solution chosen in each condition. The preferred concentration of sucrose solution in the sleep curtailment condition was significantly higher than that in the control sleep condition (20.9 ± 11.1 vs. 12.9 ± 10.8 %; F = 7.388, p = 0.012). The change in sweet taste preference was not correlated with the change in subjective desire for sweet.

The authors thank Edanz Group (www.edanzediting.com/ac) for editing a draft of this manuscript. 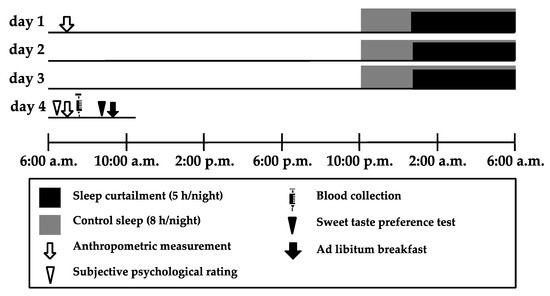