Emotional Attitude to Own Appearance and Appearance of the Spouse: Analysis of Relationships with the Relationship of Spouses to Themselves, Others, and the World
Previous Article in Journal

Introduction: Caffeine, an adenosine-receptor blocker, is believed to have neuronal excitatory effects, while Taurine, a mammalian amino acid, was shown to have neuroinhibitory effects. Aim: The aim of this study was to investigate the effects of acute and chronic administration of low doses of Caffeine and Taurine on the seizure threshold in rats. Methods: Six-week-old Sprague-Dawley male rats (n = 280) were divided randomly into five groups (control, acute caffeine intake, acute taurine intake, chronic caffeine intake and chronic taurine intake), with five subgroups per group according to five different doses of Pentylenetetrazole (PTZ) injections. Each subgroup consisted of eight rats. Data was entered and analyzed using Microsoft EXCEL and AddinsoftTM XLSTAT (Version 2012.6.06; New York, NY, USA). p-value = 0.05 was regarded as statistically significant. Results: There was a significant decrease in the latency of PTZ-induced seizures with both acute (p-value < 0.05) and chronic (p-value < 0.01) Caffeine treatment groups. Chronic exposure to Caffeine exhibited an increase in the probability of seizures (p-value < 0.05). However, acute exposure to Caffeine did not show a significant impact on the probability of seizures. Neither acute nor chronic exposures to Taurine had an effect on the probability of seizures, nor on the latency of PTZ-induced seizures. Discussion: Our study found that acute as well as chronic exposure to low doses of Caffeine (50 and 80 mg/kg) reduces the threshold, and hence increases the likelihood for seizures since it favors a state of neuronal hyper excitability through blocking of all adenosine receptors. On the other hand, acute or chronic exposure to Taurine did not show a significant effect on the PTZ-induced seizures parameters. View Full-Text
Keywords: Caffeine; Taurine; Seizures; Pentylenetetrazole; seizure threshold; rats; adenosine Caffeine; Taurine; Seizures; Pentylenetetrazole; seizure threshold; rats; adenosine
►▼ Show Figures 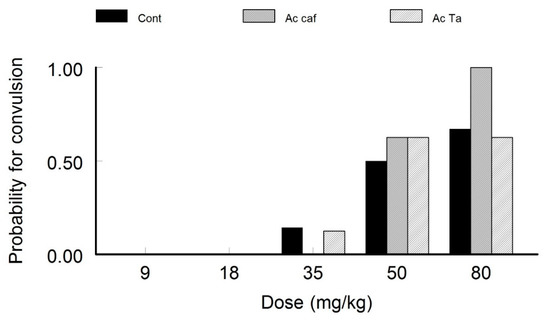