The Role of Temperature in the Safety Case for High-Level Radioactive Waste Disposal: A Comparison of Design Concepts
Previous Article in Journal

Gráinne El Mountassir
Department of Civil and Environmental Engineering, University of Strathclyde, Glasgow G1 1XJ, UK
*
Author to whom correspondence should be addressed.
Geosciences 2017, 7(2), 38; https://doi.org/10.3390/geosciences7020038
Received: 8 April 2017 / Revised: 8 May 2017 / Accepted: 10 May 2017 / Published: 20 May 2017
(This article belongs to the Special Issue Geological Disposal of High Level Radioactive Waste - The Relationship between Engineered and Natural Barriers)

:
Geological disposal facilities for radioactive waste pose significant challenges for robust monitoring of environmental conditions within the engineered barriers that surround the waste canister. Temperatures are elevated, due to the presence of heat generating waste, relative humidity varies from 20% to 100%, and swelling pressures within the bentonite barrier can typically be 2–10 MPa. Here, we test the robustness of a bespoke design MEMS sensor-based monitoring system, which we encapsulate in polyurethane resin. We place the sensor within an oedometer cell and show that despite a rise in swelling pressure to 2 MPa, our relative humidity (RH) measurements are unaffected. We then test the sensing system against a traditional RH sensor, using saturated bentonite with a range of RH values between 50% and 100%. Measurements differ, on average, by 2.87% RH, and are particularly far apart for values of RH greater than 98%. However, bespoke calibration of the MEMS sensing system using saturated solutions of known RH, reduces the measurement difference to an average of 1.97% RH, greatly increasing the accuracy for RH values close to 100%.
Keywords:
monitoring; geological disposal; sensor; relative humidity; bentonite; engineered barrier system; MEMS; geological disposal

Real-time monitoring of deep geological disposal facilities (GDFs) for radioactive waste disposal is a significant challenge. The operational timescales of a GDF mean that monitoring technologies must function reliably over timescales in excess of 100 years [1]. A regulatory requirement of any GDF is likely to be the in-situ monitoring of the thermo-hydro-mechanical-chemical (THMC) behaviour of the engineered barrier system (EBS) that surrounds the waste canister. Monitoring creates significant challenges: temperatures can be highly elevated due to the presence of heat generating waste, relative humidity (RH) varies from 20% to 100%, and swelling pressures within the bentonite barrier are typically in excess of 2 MPa.
Most geological disposal concepts, for example the Swedish KBS-3V concept, are based on an EBS composed of a compacted bentonite buffer, which surrounds the waste canister (e.g., Figure 1). Post deposition, the bentonite buffer saturates via groundwater ingress from the surrounding rock, which results in a swelling pressure of between 2 and 10 MPa to ensure hydraulic sealing between the EBS, the surrounding rock and the central waste canister. Further, the very low hydraulic permeability of the bentonite ensures that, should canister failure occur, radionuclide transport would be extremely slow, since it is via diffusion only. Finally, the plastic nature of the saturated bentonite within the EBS also protects the canister from structural damage during small earthquakes [2].
Historically, an extensive range of relative humidity sensors have been deployed in radioactive waste disposal facilities and in underground testing laboratories over the past decades [3,4]. While the measurement principle of the sensors varies, one common restraint of these traditional sensors lies in the unit size of the sensor (typically in the order of 10 cm), which limits the spatial resolution of the sensing device.
This research focuses on testing of a MEMS-based (Micro-Electro-Mechanical System) sensing system, developed in [5] for monitoring relative humidity within, or adjacent to, the compacted bentonite buffer in the EBS. Application of MEMS sensors in GDFs and other civil engineering projects still faces several key challenges in the engineering field [6]. This paper extends our previous research [5] by testing the performance of bespoke encapsulated MEMS sensors within saturated bentonite under swelling pressures of 2 MPa. We show that our encapsulated MEMS monitoring system can withstand swelling pressures in excess of 2 MPa and that, through improved sensor calibration, accurate measurements of compacted bentonite relative humidity can be achieved even up to RH values of 100%.

3.1. Mechanical Robustness of the Sensing System

The results of Experiment 1, the oedometer cell test, are plotted in Figure 7. Shown is the relative humidity measured by both RH sensors alongside the increase in total vertical stress (water pressure controlled by the GDS), in turn associated with the swelling pressure generated by the progressive hydration of the sample. A temporary signal loss occurred between days 4 and 5 and days 18 and 19, caused by a bad contact on the sensor-to-wire connector under the influence of the increasing swelling pressure. The connection for sensor 1 did not recover. Both sensors, however, are fully functional during the entire experimental period of 26 days and remain unaffected by a swelling pressure of >2 MPa, which was maintained for a 10-day period. It is worth noting that the swelling pressure and the RH recorded by the two sensors level off at the same time, highlighting the coherence of the RH measurement.
At the end of the experiment, both sensors were removed from the oedometer cell and tested again in the open air. Test results revealed that both sensors were fully functional after sustaining the high swelling pressure, without any deterioration in sensor accuracy. The swelling pressures tested here are at the lower end of those that would be experienced in a geological disposal facility, sensor performance was entirely unaffected and the sensors proved to be robust. The observed signal loss would be eliminated by more robust cable connection methods (these were soldered by hand) or by the incorporation of a wireless transmission onto the sensing system.

3.2. Sensor Accuracy within the Saturated Bentonite

Table 1 shows the results for both measurement methods (WP4 and RH sensing system) for seven different bentonite samples, as described for Experiment 2, covering a range of RH levels from 52% to 100%. Analysis of the data in Table 1 shows that the RH measured by the two methods is generally coherent, but with a mean discrepancy of 2.87(%RH). With the exception of sample No. 1, sample differences are less than 4%. For sample No. 1, at very high humidity there is a discrepancy of 8.1%.

The differences noted between the measurements of the sensing system developed here may be due both to errors in the WP4 measurement and/or the sensor measurement. The WP4 method tends to underestimate relative humidity due to invasion of ambient air into the sealed sample chamber, allowing some evaporation until equilibrium is established [12]. The WP4 also tends to be inaccurate at RH values close to 100%, when even very small fluctuations of temperature can cause drop condensation in the measurement chamber. Table 1 suggests the latter error has not been an issue: among the different measurement techniques, the WP4 is perhaps the one that ensures the largest measurement range at high RH values (up to 99.0–99.5%). Other commercial RH sensors, including thermocouple and transistor psychrometers, are characterised by a shorter measurement range (up to 98.5–99.0%) [13].
For the case of the RH MEMS sensor tested in this experimental programme, another source of inaccuracy is the non-linearity of the relationship between the air relative humidity and the volumetric water content of the hygroscopic dielectric material placed between the two plates of the capacitive sensor. When relative humidity approaches 100%, the sensing element approaches saturation. As a result, variations in RH generate variations in volumetric water content of the dielectric material that tend to become smaller and smaller as saturation is approached. In turn, variations in capacitance and, hence, electrical signal, tend to become negligible. Since the derivative of the capacitance versus RH function tends to zero as saturation is approached, there is a loss of sensitivity of the instrument close to saturation.
This loss in accuracy associated with the non-linearity of the calibration curve was quantified in [5] by the use of a variety of saturated chemical solutions, each of which had a different, known saturated relative humidity when placed within a sealed, temperature-controlled environment. Hence, these could be used as accurate reference points without the requirement for any type of sensor. The results of these experiments are reproduced in Figure 8. Data points lie on the 1:1 line (in red) in the low to medium RH range, but deviate consistently at high RH values. If the relative humidity values returned by the sensor RH are treated as raw sensor data, the sensor can be calibrated using the fitted curve in Figure 8. An adjusted estimate of the relative humidity RHA can be from the calibration equation in Figure 8:
RH = 0.001204(RHA)2 + 0.9015RHA + 2.182
Solving this quadratic equation gives an adjusted value of the measured relative humidity based on the sensor calibration curve, RHA. The adjusted values for relative humidity RHA are shown in Table 2. The difference between the measured value (RHA) and that derived from the WP4 data has now reduced. The mean of the differences between them is now 1.97% and the discrepancy between the two values for sample number 1, at high humidity, has dropped from 8.1% to 1.9%.
MEMS sensor systems are considerably smaller than traditional monitoring devices, allowing accurate point measurements (as opposed to spatially averaged) and far less physical disturbance to the engineered barrier system within a repository. The results of both Experiment 1 and Experiment 2 described here, show that our MEMs-based sensing system is a promising miniaturised alternative to traditional RH sensors in geological disposal facilities. It is sufficiently robust to withstand at least 2 MPa of swelling pressure and, once calibrated, is capable of accurate RH measurement over the wide range of RH values (20–100%) encountered within an EBS. 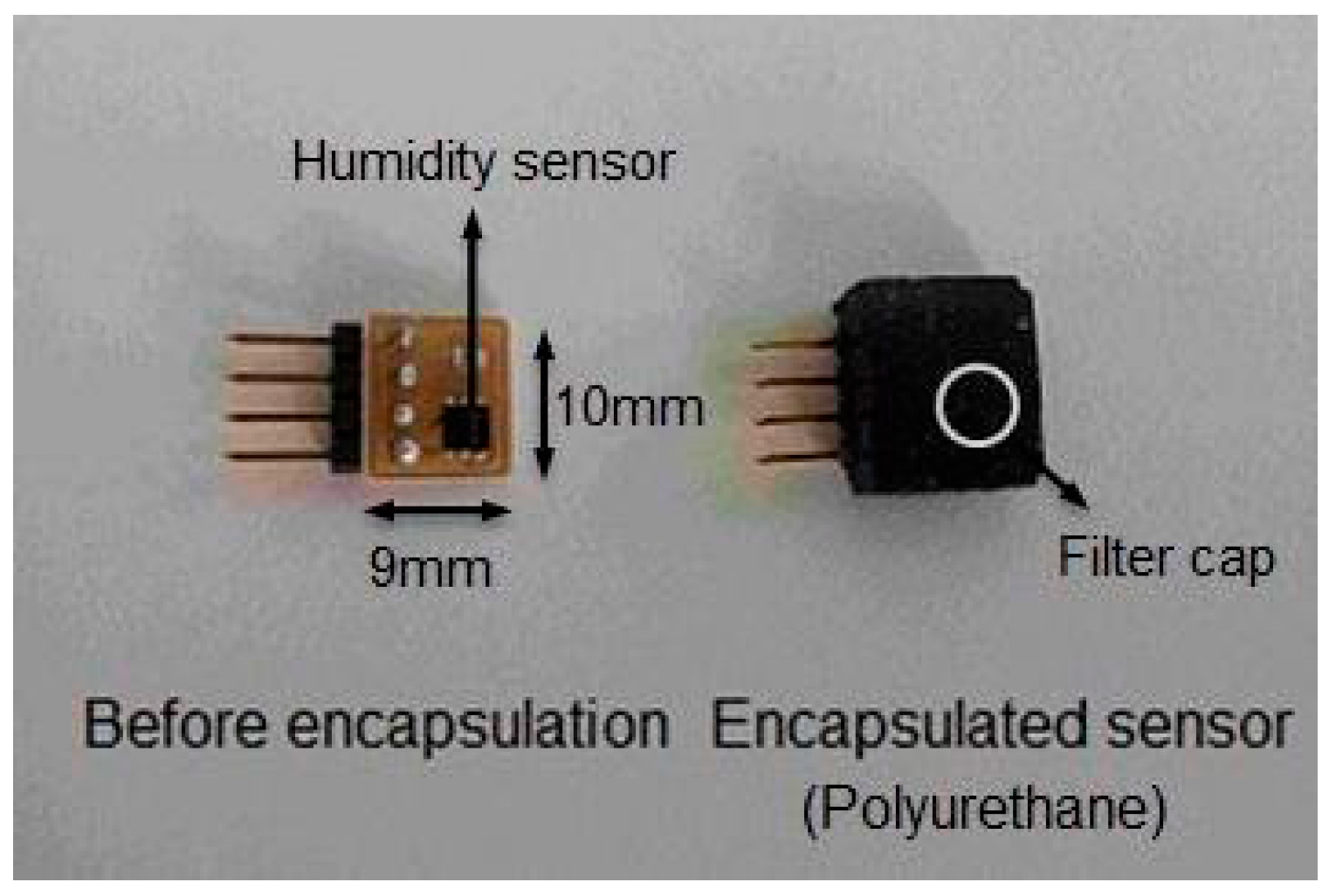 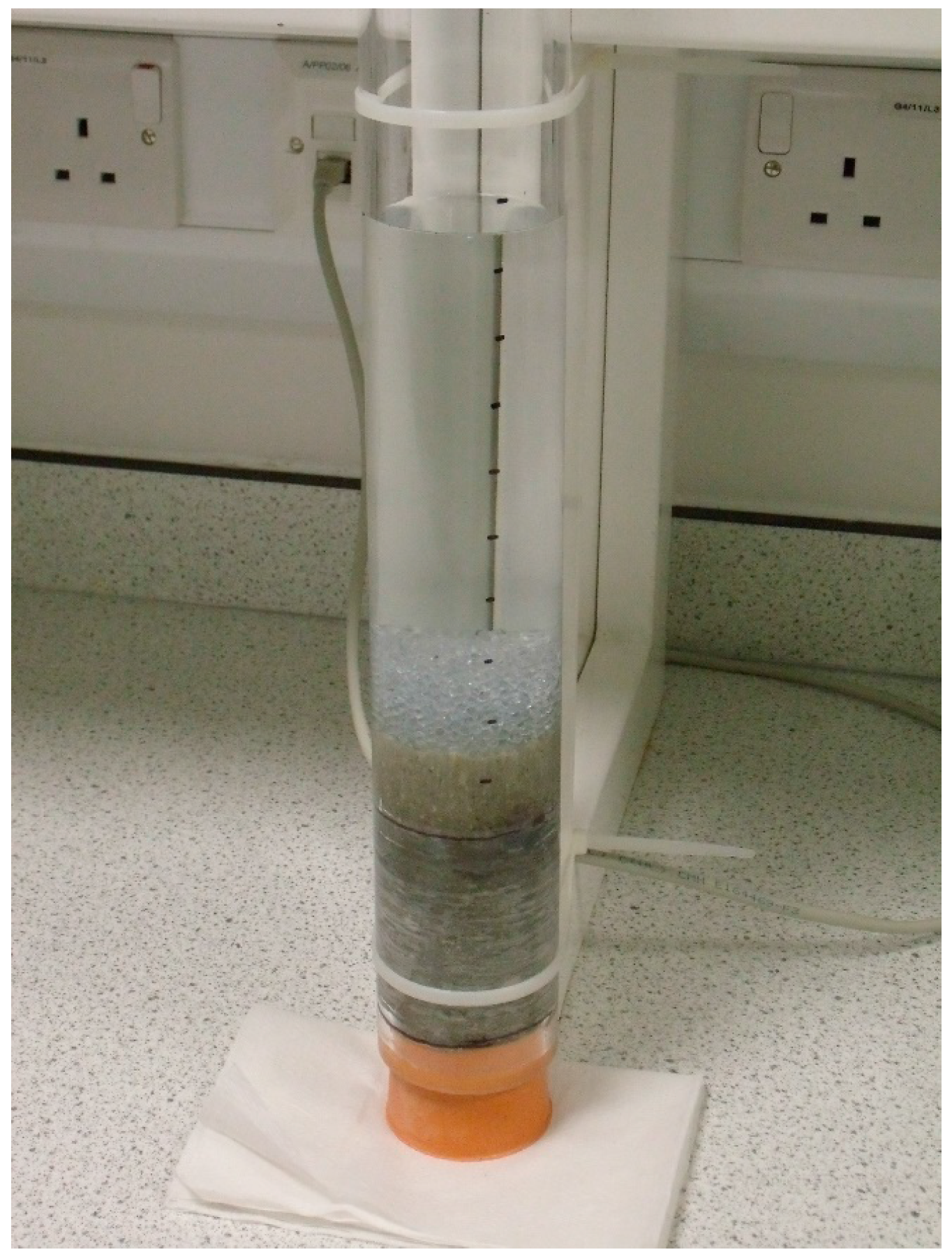 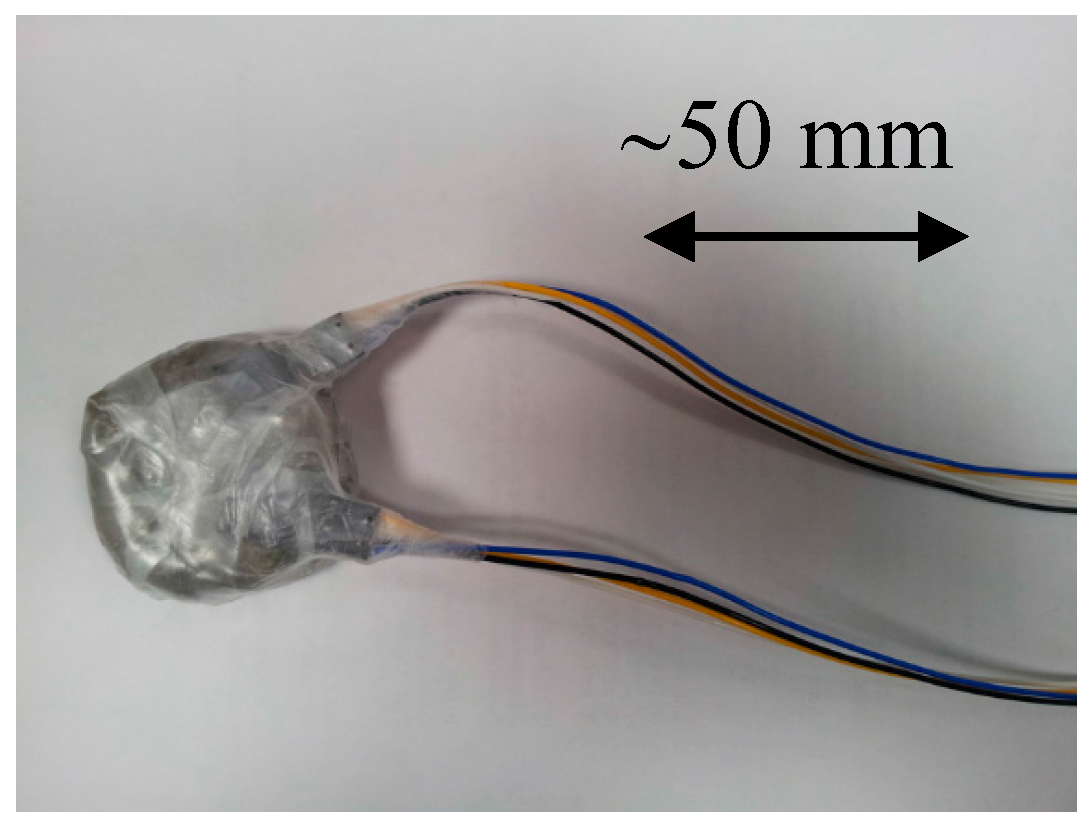 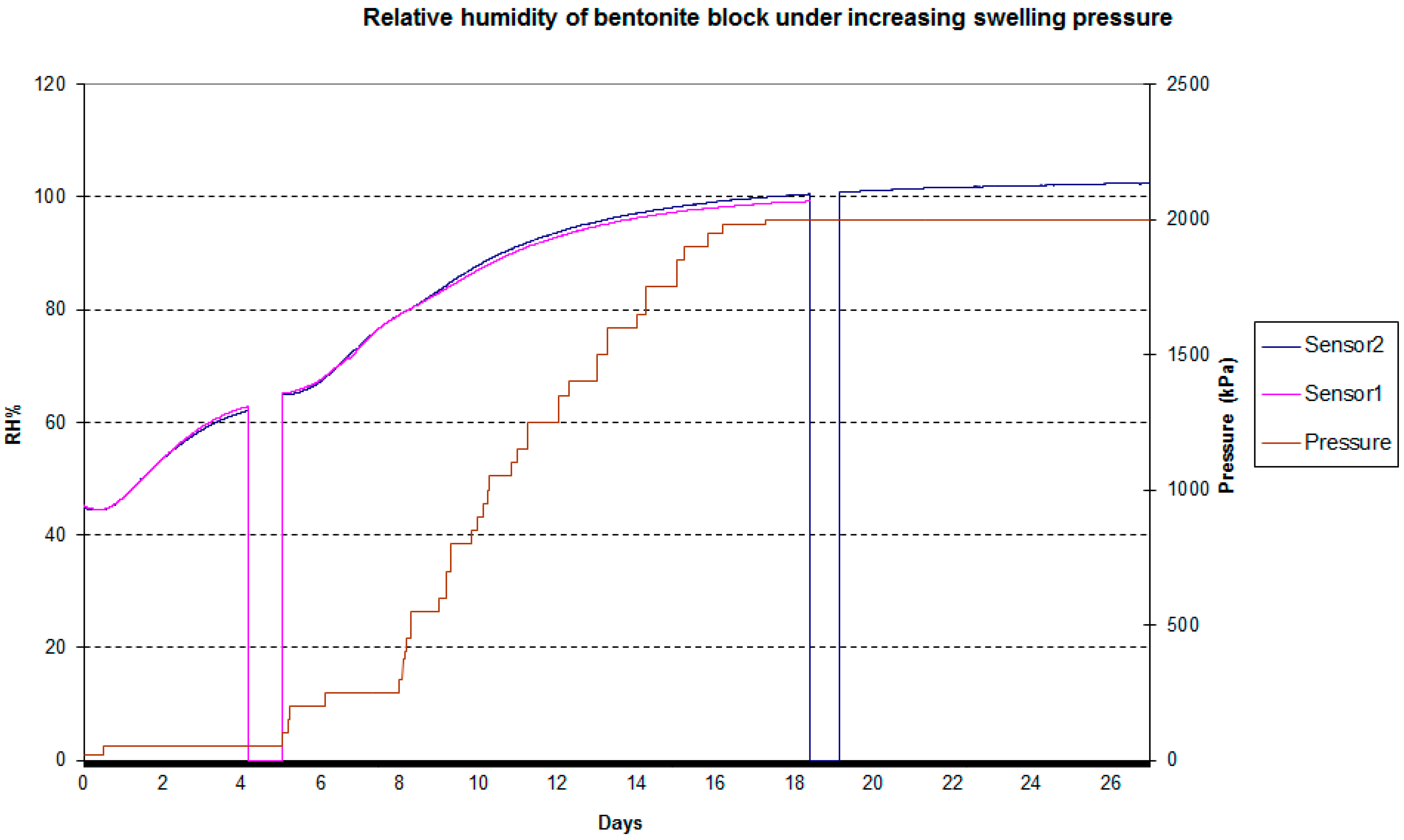