Soil creep is common along the hillslopes of the tropical Andes of Colombia, where very heterogeneous soils develop on old debris flow deposits and are subjected to abundant rainfall with a bimodal annual regime. In particular, the western hillside of the city of Medellín, Colombia, is comprised of a series of debris and earth flow deposits in which landslides and soil creep are common. To explore linkages between soil creep and hydrology, we selected an experimental site in the western hillslope of the Medellín valley to assess the behavior of water within the soil mass, its relationship with rainfall, and its connection with soil displacement. In experimental plots, we systematically measured runoff, percolation, water table levels, and volumetric water content, for a period of almost 2 years; we also conducted several alti-planimetric positioning surveys to estimate relative displacements of the soil surface. Moisture content of the soil remained above field capacity for most of the year (~68% of the time) and active and quasi-permanent lateral subsurface flow occurred within the upper 80 cm of the profile. The shallow flow likely facilitates the downslope movement. Additionally, our results suggest that displacement magnitudes are largest during the wet season of September–October–November, when a highly humid soil experiences changes in water content, so it is during this time that the effects of expansion / contraction of the soil particles (associated to wetting / drying cycles) contribute the most to the movement. This observational study represents a contribution to the understanding of soil creep in tropical hillslopes, where it responds to the wetting / drying cycles, with the particularities of a rainy weather (>1500 mm/year), warm temperatures (~22 °C on average), and a bimodal precipitation seasonality. View Full-Text
Keywords: soil creep; soil hydrology; water table; soil moisture; rainfall soil creep; soil hydrology; water table; soil moisture; rainfall
►▼ Show Figures 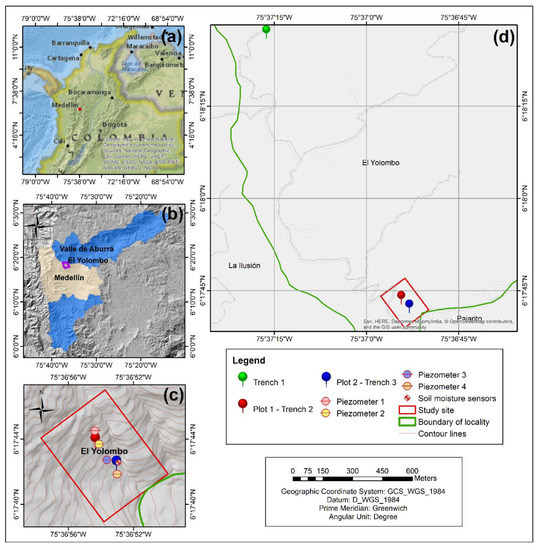