Black Carbon as a Source of Trace Elements and Nutrients in Ice Sheet of King George Island, Antarctica
Previous Article in Special Issue

Application of an Inertia Dependent Flow Friction Model to Snow Avalanches: Exploration of the Model Using a Ping-Pong Ball Experiment

Data on the disastrous snow avalanche that occurred on 18 January 2017 at the spa hotel Rigopiano, municipality of Farindola in the Abruzzo region of central Italy, are analyzed in different ways. The main results are the following. (i) The 2017 Rigopiano avalanche went beyond the run-out point predicted by the topographic-statistical - model with standard Norwegian calibration, while avalanches in neighboring paths appear to have run no farther than the -point of their respective paths during the same period. (ii) The curvature and super-elevation of the trimline between 1500 and 1300 m a.s.l. indicate that the velocity of the front was around 40 m s. In contrast, the tail velocity of the avalanche can hardly have exceeded 25 m s in the same segment. (iii) The deposits observed along all of the lower track and in the run-out zone suggest that the avalanche eroded essentially the entire snow cover, but fully entrained only a moderate amount of snow (and debris). The entrainment appears to have had a considerable decelerating effect on the flow front. (iv) Estimates of the degree to which different parts of the building were damaged is combined with information about the location of the persons in the building and their fates. This allows to refine a preliminary vulnerability curve for persons in buildings obtained from the 2015 Longyearbyen avalanche, Svalbard. View Full-Text
Keywords: snow avalanches; field observations; forest damage; impact pressures; snow entrainment snow avalanches; field observations; forest damage; impact pressures; snow entrainment
►▼ Show Figures 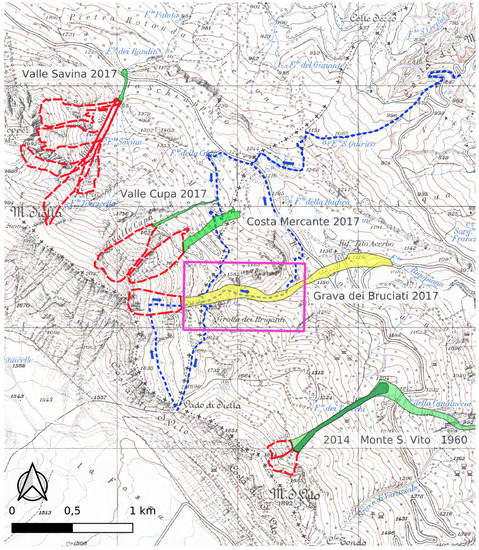