Characterization of Feeding, Sport Management, and Routine Care of the Chilean Corralero Horse during Rodeo Season
Previous Article in Journal

The Usefulness of Retinoic Acid Supplementation during In Vitro Oocyte Maturation for the In Vitro Embryo Production of Livestock: A Review
Previous Article in Special Issue

Physiological changes provide indices of stress responses, however, behavioural measures may be easier to determine. Spontaneous eye blink rate has potential as a non-invasive indicator of stress. Eyelid movements, along with heart rate (HR) and behaviour, from 33 horses were evaluated over four treatments: (1) control—horse in its normal paddock environment; (2) feed restriction—feed was withheld at regular feeding time; (3) separation—horse was removed from visual contact with their paddock mates; and (4) startle test—a ball was suddenly thrown on the ground in front of the horse. HR data was collected every five s throughout each three min test. Eyelid movements and behaviours were retrospectively determined from video recordings. A generalized linear mixed model (GLIMMIX) procedure with Sidak’s multiple comparisons of least squares means demonstrated that both full blinks (16 ± 12b vs. 15 ± 15b vs. 13 ± 11b vs. 26 ± 20a full blinks/3 min ± SEM; a,b differ p < 0.006) and half blinks (34 ± 15ab vs. 27 ± 14bc vs. 25 ± 13c vs. 42 ± 22a half blinks/3 min ± SEM; a,b,c differ p < 0.0001) decreased during feed restriction, separation and the startle test compared to the control, respectively. Eyelid twitches occurred more frequently in feed restriction (p < 0.0001) along with an increased HR (p < 0.0001). This study demonstrates that spontaneous blink rate decreases while eyelid twitches increase when the horse experiences a stressful situation.
Keywords: spontaneous blink rate; eyelid twitches; stress; horse; behaviour; welfare spontaneous blink rate; eyelid twitches; stress; horse; behaviour; welfare

Stress is defined as the response of an organism to environmental stimuli that threatens its internal equilibrium [1]. As a prey species, the domestic horse (Equus caballus) has developed adaptive fear and flight responses when faced with external stressors [2]. However, modern husbandry practices routinely subject horses to aversive stimuli such as transportation, social isolation and medical intervention. Identifying indicators of stress in the horse is fundamental for the welfare of the animal itself and the safety of the handler [3].
Various physiological measures can be used to assess stress responses in animals including heart rate and heart rate variability [4], blood or salivary cortisol [5]. However, these measures have their limitations, including the increase in stress due to the invasive nature of drawing blood, for example [6]. As a result, researchers have explored behavioural indicators to augment physiological data. For example, horses exposed to various stressors demonstrate higher head carriage [7], focused orientation of the ears [8], increased vocalizations [9] and increased mouth movements [10]. Assessing stress responses in animals appears more accurate when using a combination of both behavioural and physiological indicators [11,12]. A novel scale developed to identify stress-related behaviours subjected 32 horses to known stressful husbandry practices including the sound of electric coat clippers, social isolation and grooming procedures [13]. Moderate to high levels of stress showed an increase in oral behaviours, flared nostrils and flattened or pinned ears which correlated with an increase in heart rate (HR) and salivary cortisol [13].
However, evidence of behaviours associated with stress in horses is conflicting. Horses subjected to two stressful handling tasks—walking across a tarpaulin and walking through streamers attached to an overhead pole—displayed an increase in heart rate variability and eye temperature [14]. The time taken or willingness to complete each task was not associated with physiological indicators, showing that the horses did experience stress even when not overtly displaying stress behaviours [14]. Further, horses undergoing a hair clipping procedure, a known aversive management practice, showed compliant behaviour while displaying an increase in HR, salivary cortisol and eye temperature [15]. These studies suggest that a horse’s level of compliance and/or ability to tolerate stressors is not indicative of their level of arousal, and influences such as training may overshadow emotional responses [15].
Understanding the response of an animal to external stressors through valid behavioural indicators can be challenging and subjective, however behaviour is an easily observable and non-invasive measurement [16]. Identifying valid indicators of stress is essential to understanding the animal and ultimately improving welfare.
Eye-blink rate has been used as a non-invasive measure of arousal to predict stress levels in humans [17]. Blinking is defined as a quick movement of the eyelid that opens and closes the palpebral fissure and is composed of three different blinks: spontaneous, reflex and voluntary [18]. The levator palpebrae superioris muscle of the upper eyelid is primarily responsible for opening the eyelid, whereas the orbicularis oculi muscle encircling the palpebral fissure works to close the eyelid [19]. Upon close observation, different eyelid movements are noticeable, ranging from full blinks (complete closure of both eyelids with concomitant suppression of vision) to partial blinks (incomplete closure of the eyelids) and eyelid twitches (movement of the upper eyelid through innervation of the levator palpebrae superioris muscles with no movement of the orbicularis oculi muscles) [20]. Partial blinks have been observed in humans focused on computer terminal displays [21] and have been used as a diagnostic for dry eye disease [22]. Partials blinks have also been documented in both dogs [23] and cats [24]. Due to the large size and lateral placement of a horse’s eyes, identifying eyelid movements is easily observable. Although little investigation has been done on half blinks in horses, it has been incorporated into the Equine Facial Action Coding System (EquiFACS) as its own action unit [25].
Spontaneous blinks are uniquely different from voluntary and reflexive blinks, as they can represent a range of information processing functions spanning attention and working memory [26]. Humans subjected to stressful stimuli through social and emotional recollection tests exhibited an increase in spontaneous blink rate and a similar trend has been demonstrated in guinea pigs that are in states of emotional arousal following handling [27]. Although an increase in spontaneous blink rate has been observed in humans subjected to stressful and neurologically-demanding stimuli, spontaneous blink rate has also been found to decrease when the subject is most attentive while performing demanding tasks or exposed to stressful visual stimuli [28,29]. This suggests that humans reduce their spontaneous blink rate when perceiving visual stimuli in order to maximize the amount of information entering the nervous system; thus, increased spontaneous blink rate potentially hinders attention in humans and the ability to perceive immediate stimuli [28]. Therefore, the influence of specific stressors such as visual stimuli, emotional anxiety and/or neurological levels of arousal that initiate a fight or flight response must be considered when investigating behavioural responses in horses [17,28].
While spontaneous blink rate has been used as a non-invasive measure of stress in humans, little research has been applied to using spontaneous blink rate as a behavioural indicator in horses, and no research has differentiated between different eyelid movements. This study aims to investigate the use of spontaneous blink rate and eyelid movements as a non-invasive measure of stress in domestic horses (Equus caballus) in response to induced, external stressors. Based on the limited and contrasting evidence reviewed, sources of stressors including feed restriction and separation from herdmates were selected to induce social and neurological states of arousal. In comparison, the startle test was chosen to induce a stress response from visual stimuli. We hypothesized that spontaneous blink rates in horses would significantly increase during feed restriction and separation from conspecifics and decrease during the startle test in comparison to the control.

This project was approved by the University of Guelph’s Animal Care Committee (AUP #3143) in compliance with the Canadian Council on Animal Care guidelines for the use of animals in research.

This study used 33 riding lesson horses (Equus caballus) from three different facilities in Eastern Ontario, Canada. The horses had a mean age of 11 ± 6 years, and all horses were in good health with no documented instances of digestive issues or ulcers that might impact the feed restriction treatment. As a variety of breeds were represented, they were categorized into four categories: Thoroughbred and Thoroughbred crosses (n = 10), warmbloods (e.g., Hanoverian; n = 8), stock (e.g. Quarter Horse; n = 7) and ponies (e.g., Welsh; n = 8). Before and after each treatment, the horses were housed in their usual stalls and followed their regular regimes, including being turned out with their normal herdmates and maintaining their normal exercise routines. Their diets and feeding schedules remained the same throughout the study, with the exception of the feed restriction treatment when feed was withheld.

All data at any one facility were collected over two or three days, and all treatments for any one horse were tested on a single day. At least 10 min prior to each treatment, each horse was outfitted with a heart rate monitor (Polar RS800, Lachine, QC, USA; Figure 1) to allow them to acclimatize to the monitors. Heart rate (HR) was collected every five s throughout each treatment.
During each treatment, a handler held the horse by a lead rope attached to the halter, and the same handler was used throughout the study. The handler held the horse in place on a fairly loose lead (1 m), with just enough contact to maintain the head relatively still without restricting movement. A single observer was used throughout the study and maintained a position about 3 m perpendicular to the right eye of the horse. The observer videotaped all treatments using a Panasonic 2MOS video camera, with focus maintained on the right eye of the horse. One individual coded all the behaviours (Table 1) retrospectively from the videos using Observer XT (Version 12.0, Noldus, Leesburg, VA, USA). All occurrences of eye blinks and eyelid twitches were tallied, while the total duration of ear movement, head movement, mouth movement and restlessness was calculated over each 3 min treatment and reported as a percentage of total time.

The data was exported from Observer XT to Microsoft Excel 2011 (Supplementary File SBrate data.xlsx). All statistical analyses were carried out using SAS (Version 9.4, Toronto, ON), and significance was considered to be p < 0.05.
As there was no missing data, n = 33 for all analyses. Residuals were graphically inspected to determine the fit of the model, and horse HRs were log transformed since they did not achieve a normal distribution (Kolmogorov–Smirnov test, p < 0.01). A generalized linear mixed model procedure was used to analyse the effect of treatment on behaviour and HR, with location, age, breed and treatment as the independent variables and horse as the random factor. Sidak’s methodology was used to test multiple comparisons of least squared means for each behaviour across treatments.

The authors would like to thank the three stables who volunteered the use of their school horses for data collection. Also, thanks to Amelia Garnett for coding many of the videos. 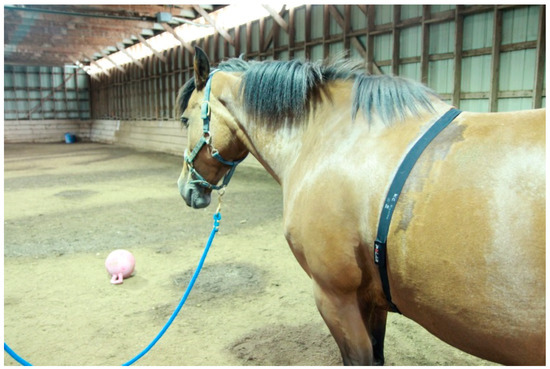 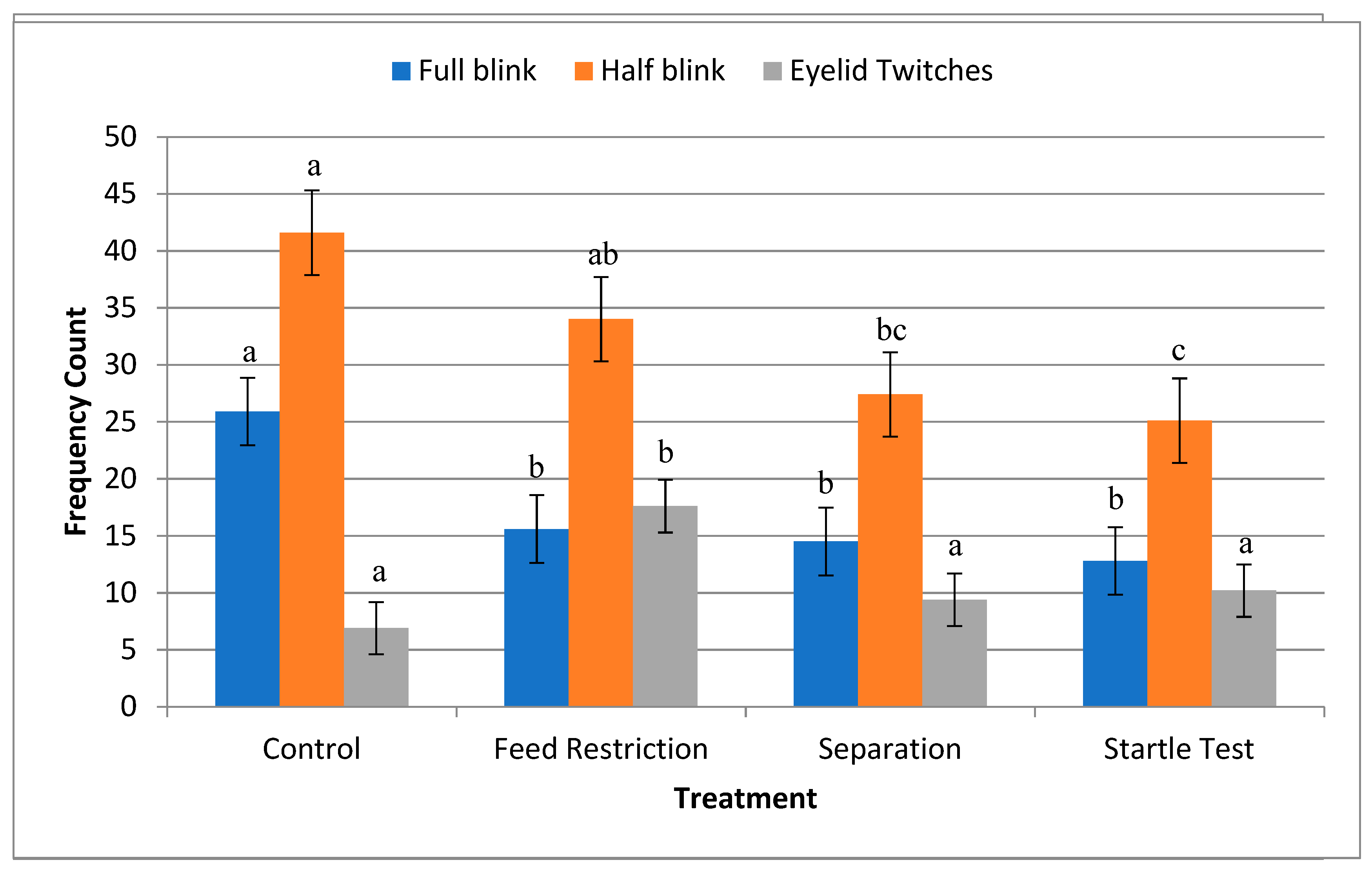 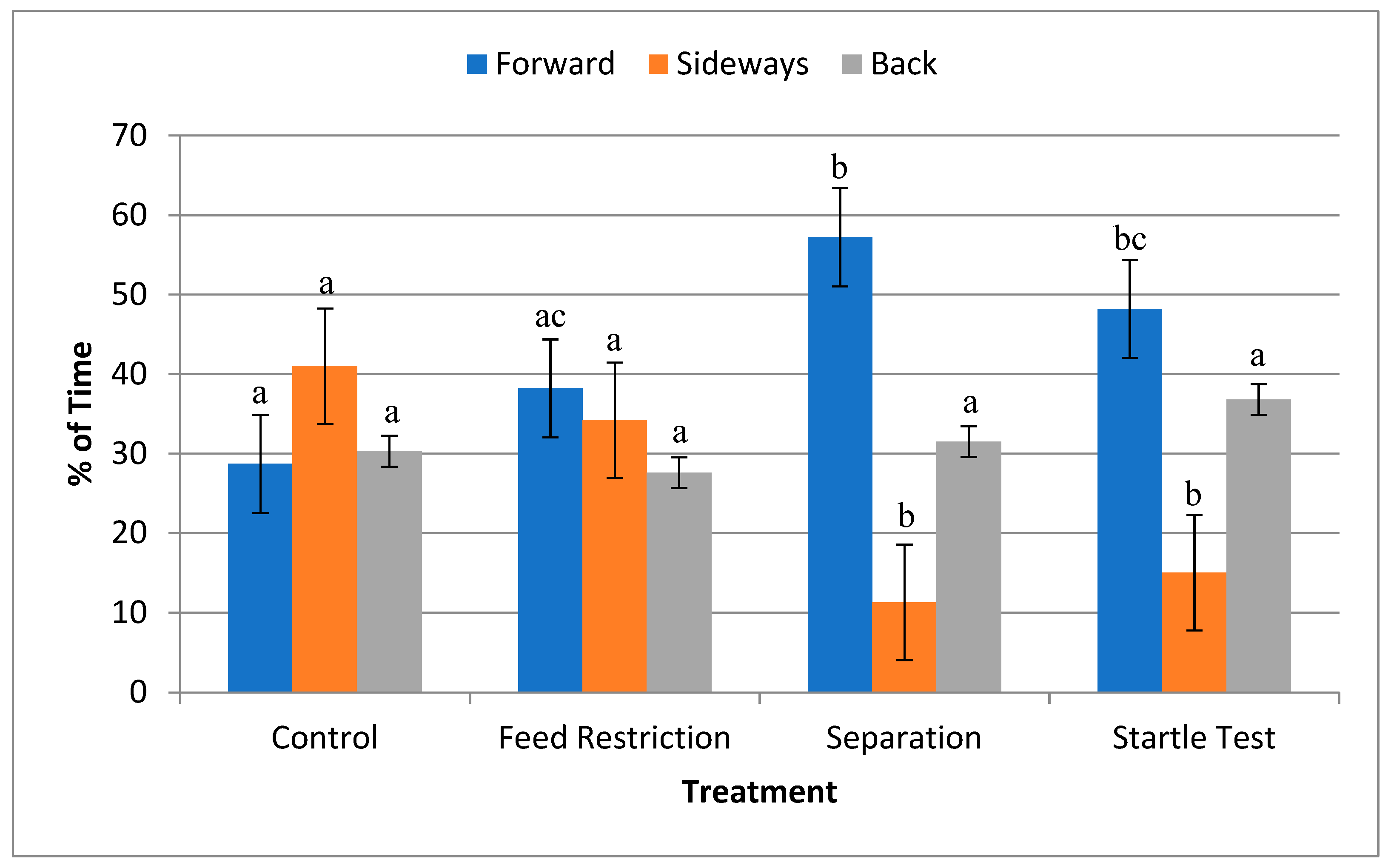