Housing Rabbit Does in a Combi System with Removable Walls: Effect on Behaviour and Reproductive Performance

The study showed that the use of mirrors may represent a low-cost useful tool to stimulate the expression of natural behaviors when rabbits are bred in small groups in a free-range system. The use of mirrors appeared to simulate the condition in which rabbits were allowed to have visual contacts with the other groups, improving important natural behaviors (olfactory investigation, gnawing, alertness, allo-grooming, stretching, locomotion). This is important in the view of adopting welfare-friendly techniques in rearing of farm animals, since consumers demand for high quality animal products is changing in a way that includes in the concept of home-made products also alternative rearing systems complying with the conditions of welfare.

The aim of this research was to evaluate the possible usefulness of mirrors in improving rabbit behavior in a free-range breeding system. Three groups (each consisting of nine replicates of three animals) were compared: isolated, isolated with mirrors and separated by a wire mesh (possible visual and olfactory contacts). Rabbits allowed to have a visual and olfactory contact showed a significantly higher expression of important natural behaviors (olfactory investigation, gnawing, alertness, stretching, locomotion) compared to the isolated rabbits (with or without mirrors); while rabbits in the mirror group showed higher allo-grooming activity than those isolated and no different locomotion activity than those separated by wire mesh. Thus, mirrors seemed to be able to modify the behavioral repertoire of isolated rabbits by acting on social perception in rabbits reared in small groups in a free-range system. Nevertheless, despite it being advisable to use a combination of different indicators in order to assess the stress level of an animal, the accuracy of serum cortisol, as well as of some secondary stress markers assay, appeared to be limited in this type of breeding.
Keywords:
environmental enrichment; stress markers; animals’ welfare; behavioral repertoire

Public opinion strongly asks for adopting welfare-friendly techniques in rearing of farm animals. Also, consumer demand for high quality animal products is increasing [1], in particular, home-made products or meat from alternative rearing systems complying with the conditions of welfare are more required in recent years. Recently, it has been proposed to change the housing system in pairs within wire-net cages (2 rabbits/cage) or small groups (4–8 rabbits/cage), which is currently implemented for rabbits in the European countries, to adopt alternative pen housing in order to ameliorate animal behavior in respect of growth performance and meat traits [2]. Understanding of rabbit behavior is essential to increase the knowledge concerning species requirements and to ensure adaptation to intensive rearing systems. Exhibition of normal behavior is among five basic freedoms forming animal welfare specified by Farm Animal Welfare Council [3], i.e., freedom from hunger and thirst, from inadequate environment, from pain, injuries and distress, from “fear” and from the impossibility to express the “normal” behavioral repertoire. Keeping animals in an improper way leads to abnormal behavior, known as stereotypies, invariant behavior with no obvious goal of function that negatively affects animals and poor psychological well-being in these animals [4]. The understanding of specific behaviors in wild animals is the first step to investigate on rearing strategies that can be respectful of animal welfare. Wild rabbits spend most of their resting time in groups and in close contact, demonstrating a complex social activity that cannot be duplicated under some commercial rearing conditions, thus affecting the expression of different behaviors and the quality of social interactions [5]. Numerous studies have been conducted on the effects of housing system and environmental enrichments (e.g., plastic platform, hiding box, gnawing stick, mirrors) to alleviate this problem, especially with regard to productive performance and the welfare of growing rabbits [6,7,8,9]. In particular, some authors compared whether the presence of mirrors in cages or pens influenced rabbit behavior [7,10,11]. The limitations of the above-mentioned researches were that none of them directly measured stress, fear or anxiety in rabbits; they were only focused on the eventual preference for mirrors by observing rabbit behavior in different rearing systems. In order to assess an animal’s welfare status, it is recommended to use a combination of different welfare indicators [12]. This recommendation is based on the problems of interpretation which arise when using only a single indicator of welfare. Many of the responses that are measured as a welfare indicator could signify either a negative or positive affective state. The aim of this research was to propose a free-range farming model able to promote the physiological behavior of rabbits but also to meet the needs of the breeders, the low number of animals per pen involves the reduction of the overall available space as well as an easier control of hygienic conditions. In this context, the use of mirrors aims to detect the possible effects of a “perceived” social contact in isolated groups on rabbit behavior and stress markers levels.

Eighty-one 45 day-old New Zealand White x California male rabbits from the same farming industry in Avellino, Italy, were included in the trial. Rabbits were clinically healthy, with a mean body weight of 1422.6 ± 15.6 g. Each rabbit was identified by using an ear tag. Animals were moved from the cages and divided into three groups (27 rabbits as nine replicates of three rabbits per group). Each group was stabled into nine pens (1.5 × 2.0 m, three for each pen) having the following features: face to face (F2F) group—the rabbits were allowed to see each other as well as the surrounding space and to have olfactory contact, blind group—they were not allowed to look around by the use of blackout plastic panels, mirrors group—they were not allowed to see either the surroundings nor the other groups but two mirrors (1.2 × 0.4 m) were placed on two adjacent walls in each box. As depicted in Figure 1, in each pen there was a kennel, a feeder area (including three troughs) and a drinking area (including three nipples). The pens were on a solid ground floor and were united for the long side of the perimeter in the order showed in Figure 1.
The panels were made of hard plastic, 0.5 cm thick, odorless and had a flat surface. Every day at 10 am the pens were cleaned, and water and feed were provided always by the same operator. A commercial feed for meat rabbits (crude protein (CP) 15.6, ether extract (EE) 3.6, crude fiber (CF) 19.0% as feed) was used all along the trial. The feed intake was recorded for the entire period of the trial by weighing the administered, refused and scattered feed. The environmental temperature and humidity were recorded along the trial.
All animals were free to move inside the pen, the duration of the trial was of 45 days (including seven days for adaptation), which is considered as the standard fattening period of rabbits reared for meat production in Italy.
After one week of adaptation, a 24 h recording was performed every seven days by using an AP-320S C&Xanadu camera for each pen. During the recording nobody had access to the pens to avoid interfering with the normal behavioral repertoire adopted by the animals. Recordings were watched by a single operator and analyzed for the following behaviors: drinking (minutes), feeding (minutes), olfactory investigation (minutes), gnawing (minutes), nose to nose (seconds), scratching (minutes), alarm (seconds), allo-grooming (minutes), kennel stay (number), stretching (seconds), locomotion (minutes), inactivity (minutes) and cecotrophy (number). For each pen, how many times and for how long the rabbits showed each of the above-mentioned behavioral repertoire was measured.
At 90 days of age, blood samples were collected fasting from an ear vein of each rabbit by the same veterinary practitioner in plastic tubes with and without K3-EDTA. K3-EDTA were used for packed cell volume (PCV) assay by using an automatic counter (HeCoVet C, SEAC, Italy). The other aliquot was centrifuged at 2000× g for 15 min and serum was used for determination of cortisol, glucose, lactate and total protein. An AIA-360 automated immunoassay analyzer and reagents from Tosoh (San Francisco, CA, USA) were used to assay cortisol. Glucose, lactate and total protein were assayed by means of an automatic biochemical analyzer AMS AUTOLAB (Rome, Italy) using reagents from Spinreact (Girona, Spain). All the procedures used in the study were approved by the Ethical Animal Care and Use Committee of the University of Naples Federico II and received formal institutional approval in accordance with local and national law, regulations and guidelines (OPBA, CSV, University of Naples Federico II, prot. 2019/0058989).
Results were expressed as means + root mean squared error (RSME) and analyzed for groups (F2F, blind, mirrors) and for daytime (time slot 1: 8:00 am–4:00 pm; time slot 2: 4:00 pm–12:00 pm; time slot 3: 12 pm–8 am).

No stereotypic behavior was observed among rabbits. The rabbits’ ethogram is reported in Table 1.
The rabbits kept in pens F2F appeared more active compared to the other groups, they spent daily only 135.6 min to rest (p < 0.01) and spent much more time in gnawing (47.7 min vs. 14.8 and 13.1 min than blind and mirrors, respectively; p < 0.01) and olfactory investigation (30.6 min vs. 22.2 and 22.5 min of blind and mirrors, respectively; p < 0.01). By contrast, the mirrors and blind groups showed more similar behaviors in terms of time spent on olfactory investigation, gnawing, alarm and stretching, but always lower than F2F group. Compared to the other groups, the blind one spent more time in terms of number of kennel stay (27.6 vs. 14.7 and 2.42 for F2F and mirrors, respectively; p < 0.01). The mirrors group showed the higher % of time, after inactivity time and feeding, in allo-grooming (52.3 min; p < 0.05) compared to both the other groups. Moreover, the time spent on the mirrors was higher during the dark period (time slot 3) compared to the other time slots.
Despite no significant differences were detected among groups for drinking and feeding (135.6, 137.2 and 137.1 g/h/d for F2F, blind, mirrors, respectively), some differences were detected in terms of time slots. In particular, rabbits spent significantly more time drinking (64.0 min/day) from 4:00 pm to 12:00 pm (time slot 2) and less time feeding (89.5 min/day) from 8 am to 4 pm (time slot 1). In time slot 1, rabbits spent more time inactive (p < 0.01), in time slot 2 in olfactory investigation gnawing, nose to nose (p < 0.05) and less time inactive (p < 0.01). Interaction between group x time resulted significantly different (p < 0.05) only for locomotion, the differences are depicted in Figure 2. There was no significant difference among groups for the other behaviors.
In Table 2, results concerning cortisol and secondary stress markers are reported.
Glucose resulted significantly lower (p < 0.01) in F2F group (112.5 vs. 132.5 and 135.4 mg/dL, blind and mirrors, respectively). Total protein resulted in significantly different values (p < 0.01) for mirrors and blind (7.10 vs. 6.23 g/dL, respectively). Lactate resulted significantly higher (p < 0.05) in F2F group (81.9 vs. 65.3 and 69.2 mg/dL for F2F vs. blind and mirrors, respectively).

In conclusion, mirrors may represent a useful, low cost environmental enrichment in the free-range breeding system by acting on the behavioral repertoire with potential effects on animal welfare and productive performance. 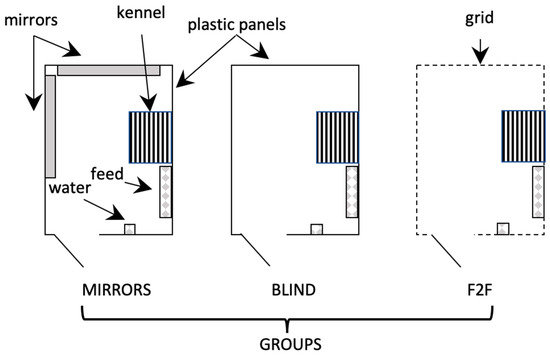 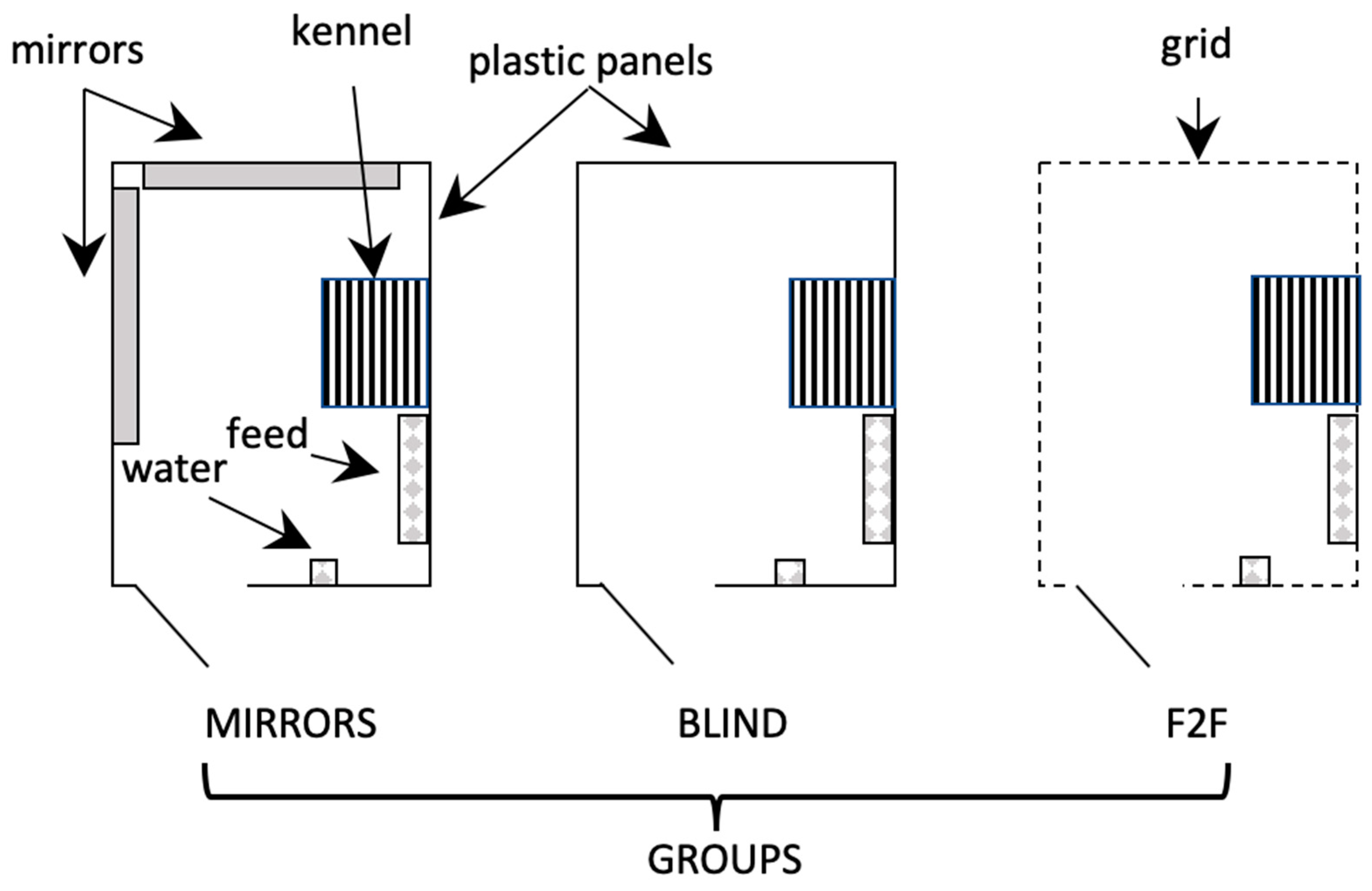